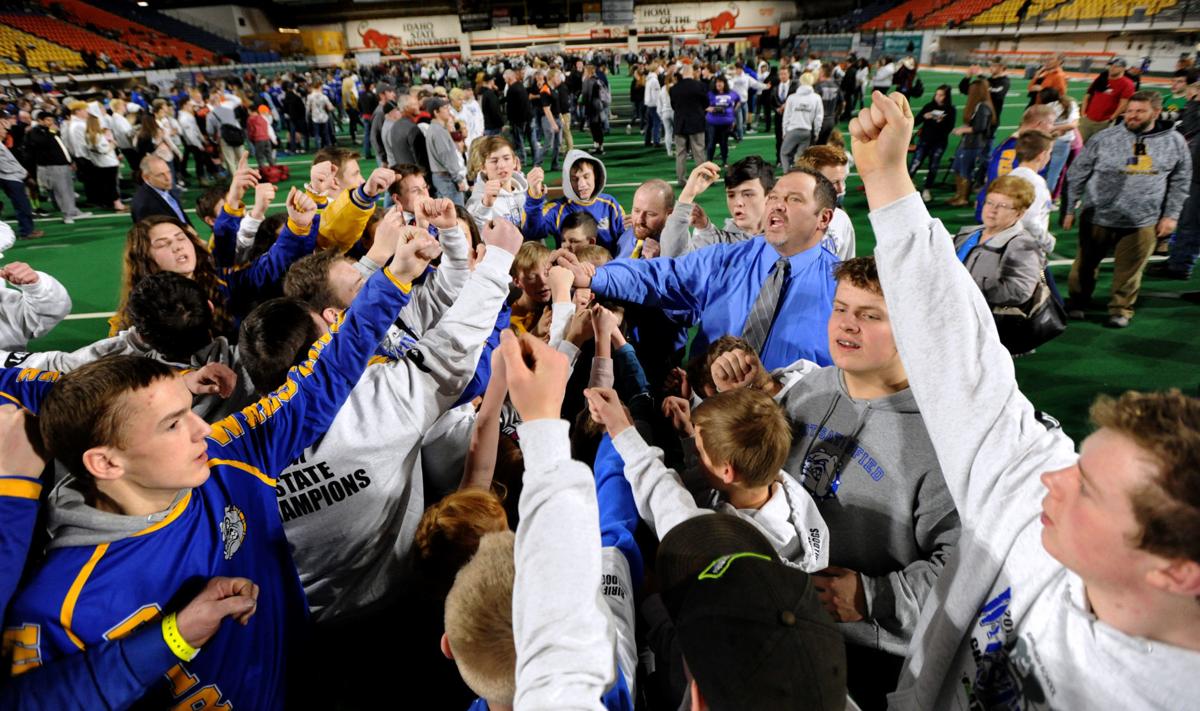 Ririe wrestlers, coaches and supporters celebrate their 2A state championship Feb. 23 at Holt Arena. Ririe is one of two teams in Idaho regardless of classification to ever win five consecutive wrestling state titles.

Ririe wrestlers, coaches and supporters celebrate their 2A state championship Feb. 23 at Holt Arena. Ririe is one of two teams in Idaho regardless of classification to ever win five consecutive wrestling state titles.

RIRIE – Mashed potatoes and gravy are the enemy. The smell of fresh pie wafting through the air is torture.

Welcome to the world of a wrestler at Thanksgiving.

For wrestlers who have to cut weight, the holiday season can be cruel.

Cutting weight is part of the wrestling culture. Some would argue it’s the hardest part.

Today as families gather around the table to give thanks and offer blessings, wrestlers will suffer in silence as food gets passed around. It’s not just any food, either. Mostly it’s the fattening kind, the good stuff that those not cutting weight will consume with delight. And then go back for a second helping.

“It does stink that wrestling season is right at the two best holidays for food,” Ririe coach Chris Harris said.

Suffering and torture might be overstating what wrestlers go through. Most wrestlers have learned how to handle their diets and fitness and are prepared to enjoy the holidays as best they can.

“I don’t worry about it too much,” Ririe junior Gabe Sommers said. “Coach told us to just enjoy the holidays and be smart.”

Harris noted that the Idaho High School Activities Association has guidelines for weight loss and monitors wrestlers’ progress when they cut weight.

The days of trying to drop 15 pounds two weeks before the season are long gone.

Harris said that some of his wrestlers keep track of their weight all year, not just during the season. Some, like Sommers, have a regimented workout they do every day.

Sommers is one of the lucky ones. He hasn’t had to worry about cutting weight and has even tried to gain weight at times.

“It’s hard to watch them, honestly,” he said of his teammates who are obsessed with the scale and monitor every pound. “I bring a lunch box to the tournaments and I try not to eat in front of them.”

Ririe must be doing something right. The Bulldogs won their fifth straight 2A state title last season, joining Teton as the only Idaho wrestling program to ever win five state titles in a row. Sommers is a returning state champion at 195 pounds, as is Stetson Machen at 113.

Machen, a senior, will wrestle at 120 this season and is in the process of losing eight pounds to make weight before the season opens next week. He has a couple more pounds to go.

“The biggest thing around the holidays is making sure you don’t put on so many calories that you’re not going to be able to get them off,” he said, noting that his family has a wrestling background, so everyone knows how much discipline it takes to make weight and eventually become a champion wrestler.

“The main thing is trying to drink a lot,” he said. “That keeps your body from craving so much food. It keeps your stomach full.”

Smaller portions are always helpful, he said. Knowing what to eat and what not to eat on Thanksgiving is crucial.

“Desserts will kill you and make you feel weighed down when you come back to practice,” Machen said.

Making the right choices can have long-term results.

“You kind of think about how hard you have to work in practice the next week (to lose weight). You’re thinking ‘If I don’t eat this now, maybe I’ll be able to eat an extra granola bar the day before the meet.’ It’s a tradeoff.”

Sometimes experience helps. Sherwood said he cut 10 pounds as a freshman, but would gorge himself after tournaments and was miserable afterword. That’s no longer a problem.

Harris said wrestlers will get the weekend off during Thanksgiving. They’re responsible for how they handle their meals.

“Some kids don’t understand that if you take your time and do it right, you don’t have to suffer,” Harris said.

As the holidays approach and the season gets underway, there is one thing that all wrestlers agree on.

“Stay away from the mashed potatoes,” Machen said.

According to Wrestler Nutrition's site, there are several ways for wrestlers to survive the holidays.

Here are a some tips:

-Skip full-fat dips and eat yogurt dips instead. To put things in perspective, 1oz of sour cream has 60 calories and 1oz of greek yogurt only has 10-15 calories. The savings of even a few small scoops add up quick.

-Try roasted sweet potatoes instead of candied yams. 3/4 of a cup of yams has approximately 215 calories vs. the 100 calories in the same portion of sweet potatoes.

- Eat white meat instead of dark. 3.5oz of dark meat is approximately 230 calories vs. 160 for white meat, that’s a savings of 70 calories for each serving.

-Skip the casserole and eat fresh green beans and save 90-130 calories per 3/4 cup serving.