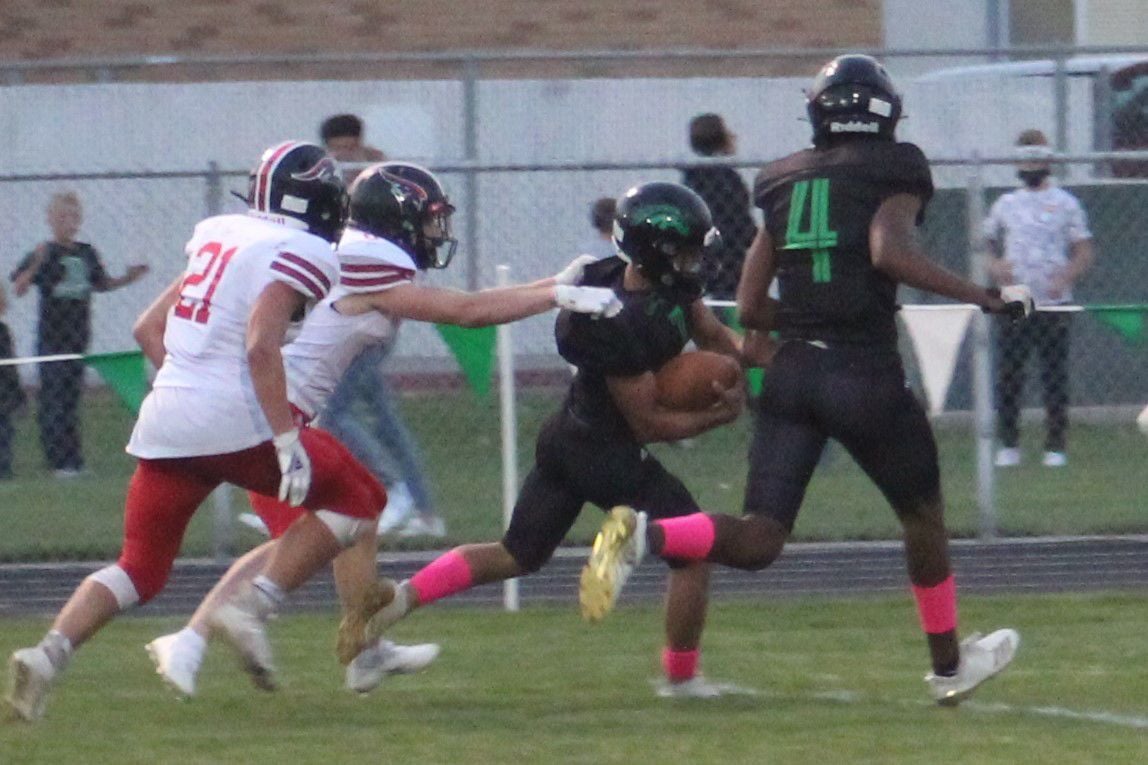 Austin Ramirez carries the ball down to the one yard line, setting up a Teegan Thomas touchdown in the first half. 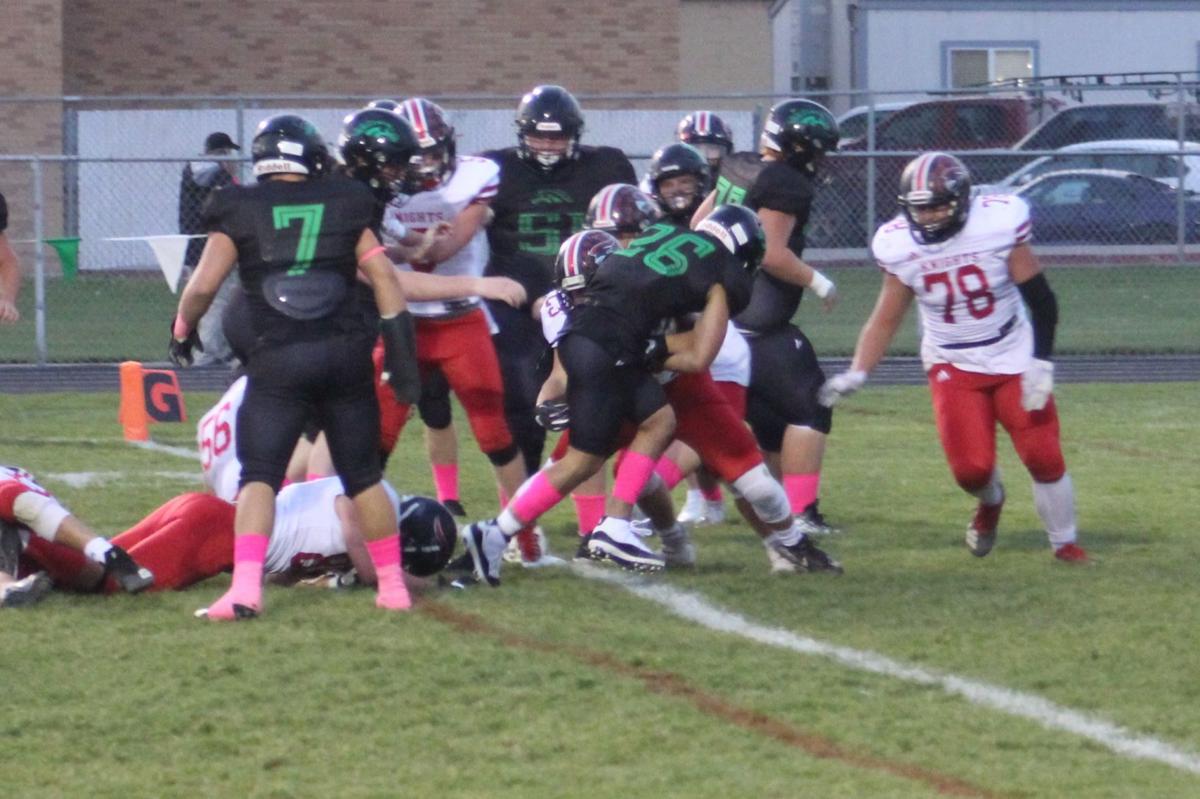 Austin Ramirez carries the ball down to the one yard line, setting up a Teegan Thomas touchdown in the first half.

BLACKFOOT — It wasn't pretty and it wasn't quite the high-scoring affair that many expected, but when the Blackfoot Broncos and Hillcrest Knights hooked up on Friday night, they gave the fans everything that they wanted — and then some.

In a game that started off with both teams running the ball exclusively until the final minute of the first half and was close throughout, it came down to a two-point conversion with 1:24 remaining in the contest by Blackfoot's all-state running back Teegan Thomas, which pushed the Broncos to the one-point victory 15-14 over the hard-luck Knights on a cool night where the game was played under a full moon.

That alone probably make the Knights feel that they played the game under a witch's spell. It was that kind of a game.

The game began with the Knights receiving the opening kick off and going three and out, and although the Broncos did manage to get a couple of first downs, they were forced to punt as well.

The Knights were dead-set on running the ball themselves, and they used the legs of quarterback Demik Hatch to do most of the damage. Hatch alternated between handing off to Tre Kofe and pulling the ball back and running himself, but there was not a lot of yardage to be gained as the Broncos stood tall defensively and the defensive line in particular was very tough to gain any yards against.

The Knights were also using a very tight formation that allowed the Broncos to pack in the defensive and fill the box with players that made any yardage gains tough to get.

On the Broncos' second drive of the night, they rode the legs of Thomas and then switched things up by running Austin Ramirez, who broke off a 40-yard rush, giving the Broncos a 1st-and-goal on the one-yard line, where Jace Grimmett handed the ball off to Thomas, who powered his way into the end zone for the game's first score. The Broncos led, 7-0.

That score came at 4:58 of the first, and the game basically came to a standstill for most of the rest of the first half, although a lot of it had to do with solid defensive plays on both sides of the ball. Just when you might think the Broncos were going to punch in another score, the Knights would stand tall and put up a defensive stand that held the Broncos at bay.

With about five minutes remaining in the second period, Rivera broke off another long run, taking the ball down to the Knights' 10-yard line, but he fumbled as he got tackled and the Knights recovered.

That was the start of a long drive for them.

The Knights took the ball down to the Blackfoot six-yard line and with 1:24 remaining in the half, and Kofe was able to carry the ball in for the game-tying score.

The two teams would go to the halftime intermission tied at 7-all.

The second half began much like the first, with both teams stressing the run and using the passing game very sparingly.

Again, it was a fumble that gave the Knights fairly good field position and with 4:45 left in the third quarter, Hatch was able to use a quarterback draw to get into the end zone. Just like that, the Knights had a lead at 14-7 and the Broncos seemed to be playing on their heels.

Several possessions by both teams left the score at 14-7 when the Broncos got the ball back with only 3:30 remaining, and they immediately went to the passing game to move the ball down the field.

A pair of nice catches by Ja'Vonte King and a pass into the flat to Thomas got the ball down to the Knights' 20-yard line.

A missed play to a wide open Carter Layton went awry. Grimmett came right back and connected with King, who would take the ball in from 20 yards out for the score with the all important extra point to come.

“I asked the kids during that timeout we called,” Blackfoot head coach Jarrod Ackley said. “... They all said we want to go for the win and they wanted to run the ball, so we gave it to Thomas and he got the ball into the end zone for the two-point conversion.”

The Knights made a valiant effort to get the ball down the field from their own 20-yard line after the touchback on the kickoff by Cornell, and with the aid of a couple of penalties by the Broncos, they did manage to get the ball across the 50-yard line before time ran off the clock.

With the win, the Broncos move to 5-1 on the season and 1-1 in the High Country Conference.

Hillcrest falls to 3-3 and 1-1 in conference play.

The Broncos will host Rigby on Oct. 9.

Hillcrest will tangle with Bonneville, also Oct. 9 at Thunder Stadium.