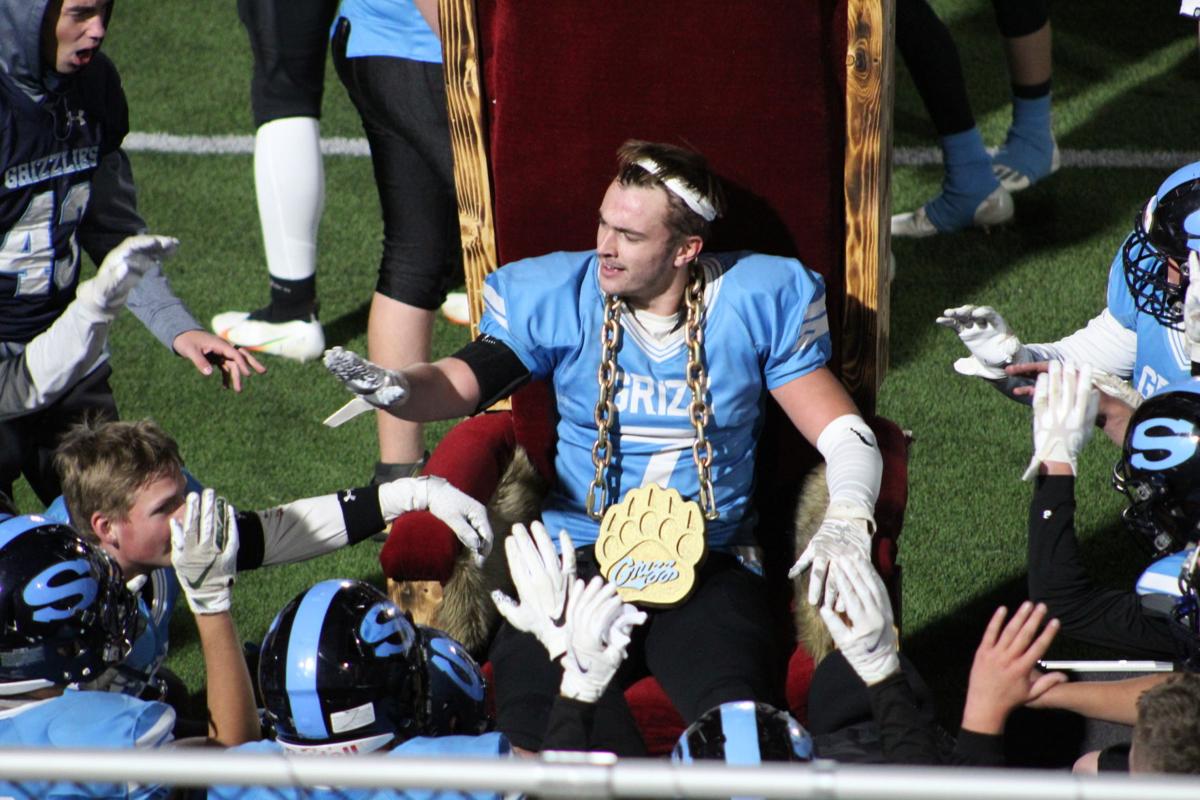 Skyline linebacker Karsen Jensen sits in the team’s turnover throne after recovering a fumble for a touchdown last week against Twin Falls. 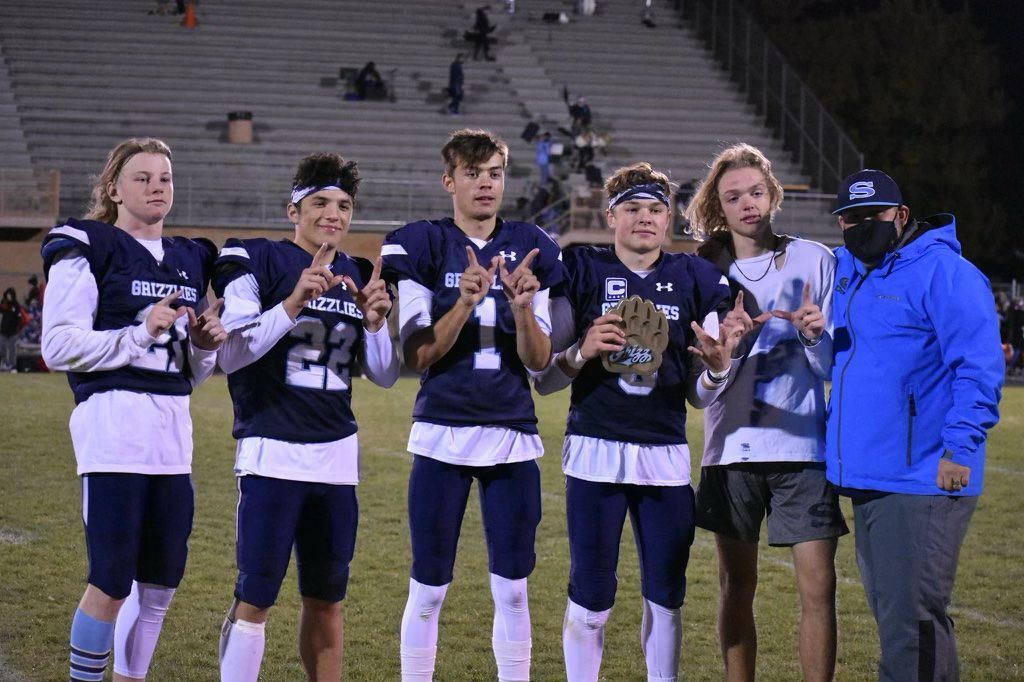 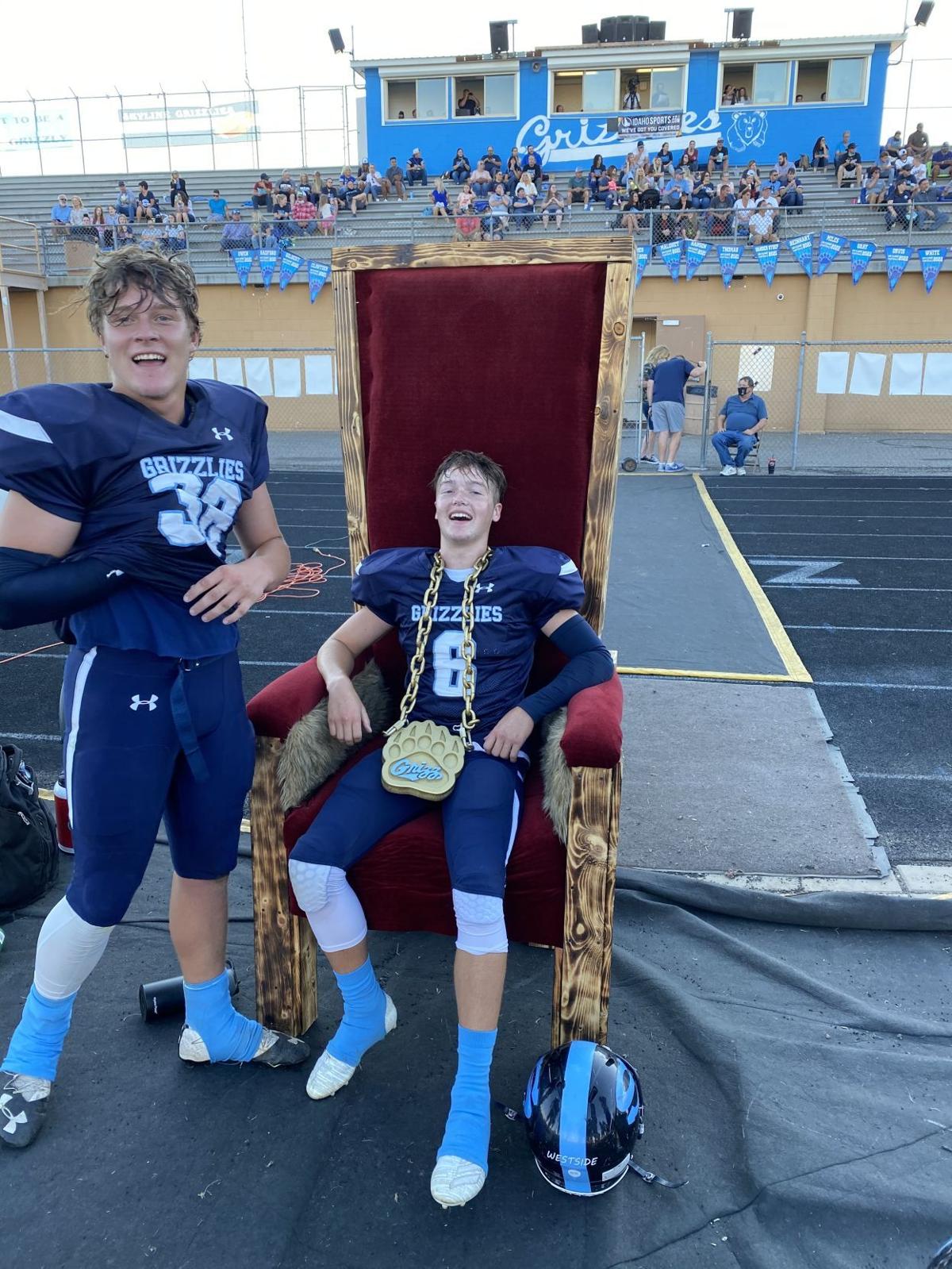 Skyline linebacker Rylan Parke wears the Grizz chain and sits in the turnover throne during the Grizzlies' home-opener this season. 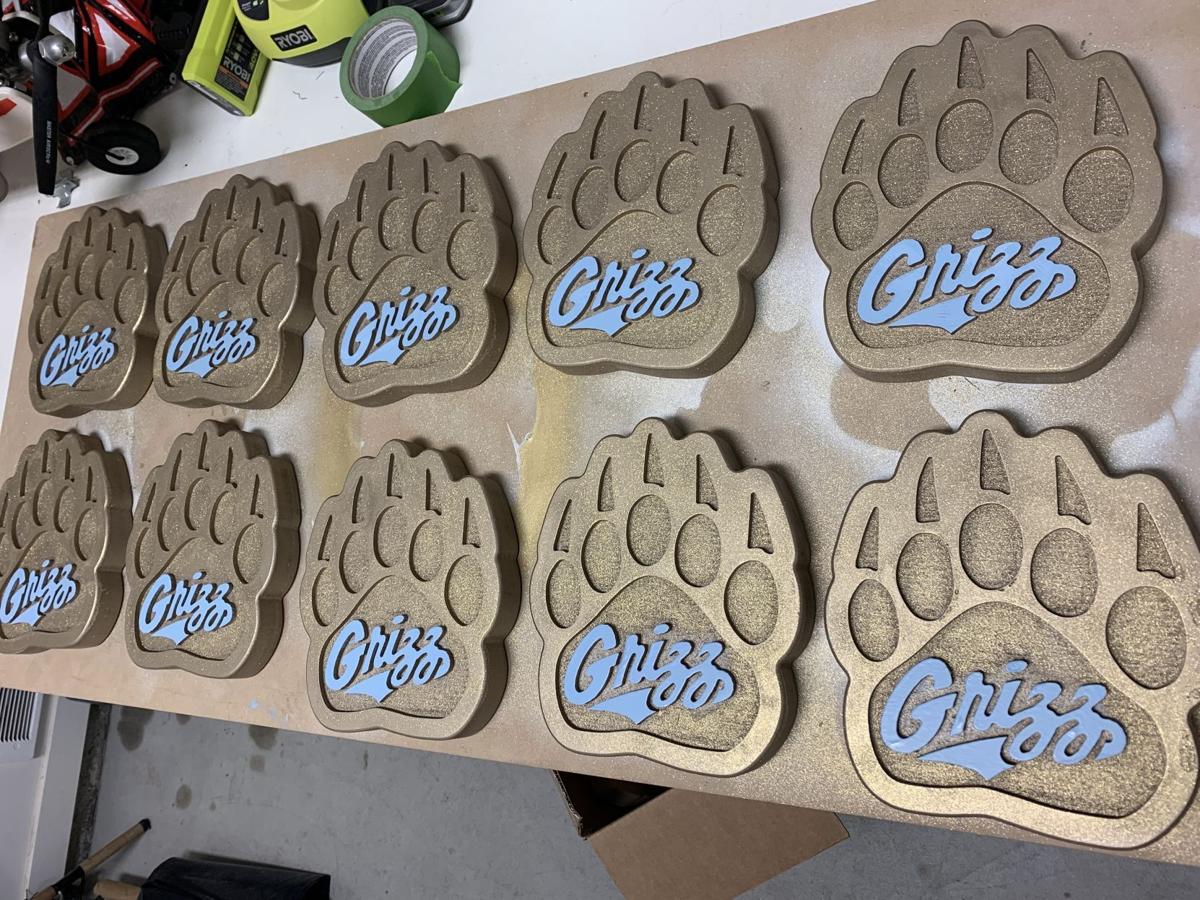 A line of Grizz paws lie on a table for construction. 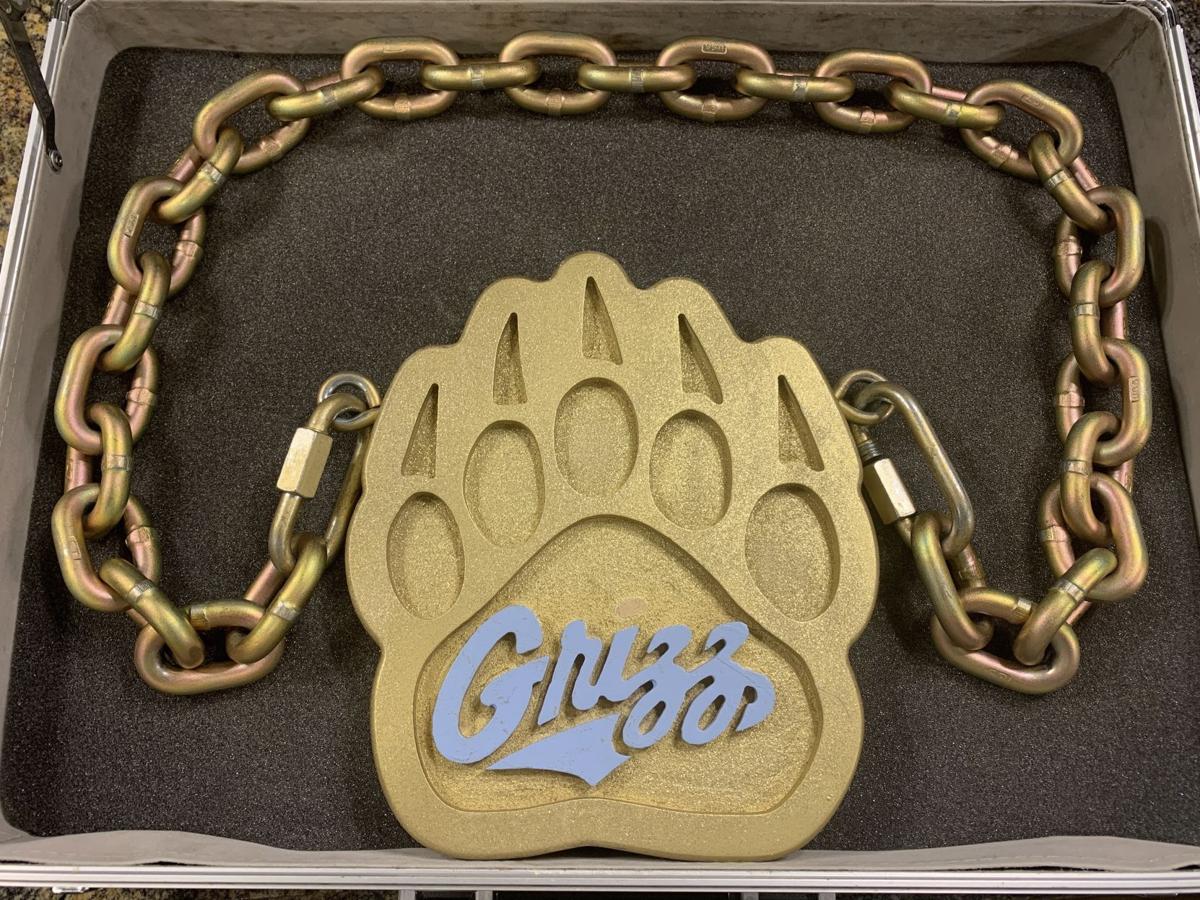 The Grizz chain that lives in a briefcase, which travels to every Skyline game.

Skyline linebacker Karsen Jensen sits in the team’s turnover throne after recovering a fumble for a touchdown last week against Twin Falls.

Skyline linebacker Rylan Parke wears the Grizz chain and sits in the turnover throne during the Grizzlies' home-opener this season.

A line of Grizz paws lie on a table for construction.

The Grizz chain that lives in a briefcase, which travels to every Skyline game.

It was Halloween eve, and Skyline was decimating Twin Falls in the 4A state playoff opener on a chilly night in Rexburg. The Grizzlies had scored on five straight series, opening a six-score lead, which stood late in the third quarter.

On this particular play, Twin Falls was on its side of the field, where it spent most of the game. Skyline dialed up a blitz. Linebacker Karsen Jensen darted into the backfield. The Bruins couldn’t complete a handoff, and the ball fell to the ground. It bounced up. Jensen snared it, raced 45 yards the other way and into the end zone.

The Grizzlies took a 49-0 lead, but for their defense, the fun was only beginning.

Jensen joined his teammates in a celebratory game of duck-duck-goose in the end zone — “He wasn’t too pleased with them in the locker room,” defensive backs coach Chet Taylor said, referring to head coach Scott Berger — but then, Jensen jogged to the sideline.

His teammates rushed to a briefcase on the ground, which protects a gold chain that displays a thick wooden paw with “Grizz” insignia across the middle. They threw it on their defensive leader. Jensen climbed into a seven-foot, 200-pound velvet chair, where dozens of his teammates crowded around, bowed down and worshipped Jensen.

When defenders create turnovers, their teammates unsheath the chain, which they hang around the neck of the player. The player then hops into the turnover throne. Teammates bow to the king. Parents shoot photos from the stands. Everyone involved, even offensive players, cherish the experience.

“It’s just excitement going through your head, about yourself and getting the turnover and your teammates being happy about that,” linebacker Isaac Farnsworth said. “I think it’s a special moment to sit in the throne for those few seconds.”

Both traditions are relatively new. The chain started last year, while the throne began this season.

Their execution is pretty simple. Their beginnings required more work.

Before the 2019 season, Paul Haacke got to thinking. Including his sophomore quarterback son, Lachlan, each of his five children had either graduated from Skyline or are working to do so. Across those years, he noticed a trend developing. The spotlight usually goes to players on offense: quarterbacks, running backs and receivers, those with the ball in their hands.

Defenders were doing largely thankless work, he realized, at least to those outside the program. Plus, he noticed the Grizzlies were celebrating with a flimsy, plastic chain.

“I’m like, ‘We’ve got to celebrate these guys somehow,’” Haacke said. “We’ve got to do a lot better than that.”

So he got to work.

Haacke contacted his neighbor, Ken Donahoo, who owns a CNC router, a computerized machine that cuts designs into materials.

Together, they worked in Donahoo’s garage to produce a wooden paw, complete with the cursive “Grizz” logo featured prominently in the center. Haacke sanded it. He brushed it with a coat of metallic gold paint, then a layer of sparkling gold paint. He finished it off by giving the “Grizz” logo its signature Carolina blue color.

Finally, he took a section of gold-painted chain from Rocknak’s and attached it to the corners of the paw.

With that, a tradition began.

The team keeps one chain in the briefcase for celebratory purposes, so to keep the ritual alive, Haacke repeats the process. He works with Donahoo to produce around four paws per week.

On Fridays, he takes them to games and climbs into the bleachers. When he sees a player create a turnover, he writes down all the relevant information: The player’s name and number, the time of the game and the type of turnover. After the game, he takes the information and the paws and gives them to defensive coaches, who use Sharpies to copy the information onto the backs of paws.

Then, they award the paws to the players, who take them home. Farnsworth, owner of three paws, is planning to build a stand for his. Generally, most players like to show theirs off.

Well, most of them at least.

“I’m in the process of moving, so right now, they’re on top of a box,” said Thomas, who has five paws, three from last year and two from this one. “But when I do move into my new house, I’m going to probably put them on a shelf or something.”

The other part of the tradition, the turnover throne, doesn’t take nearly as much work.

It began this August. Taylor, the defensive backs coach, chatted with his players, who saw Boise State’s throne and Miami’s turnover chain. They liked those ideas, but they wanted to put their own spins on them.

So Taylor went looking for something fun. After a two-a-day practice, he scrolled through Facebook Marketplace and spotted a throne at a local haunted house. The asking price was $75. Taylor picked it up, paid for it and transported it back to the high school.

Coaches decided to unveil the throne before the team’s first home game, a matchup with Thunder Ridge in September. When players jogged onto the field for warmups, Taylor called his unit over.

“What the heck is that?” players asked.

“And they all just kind of jumped in the air and started going crazy,” Taylor said with a laugh. “They thought it was awesome.”

“Everyone was like, ‘That’s sick, that’s dope,’” Thomas said.

“It just got me more excited to get more turnovers,” Farnsworth said.

“It was like, ‘We’ve got to bring it everywhere with us,’” Swafford said. “The turnover chair goes wherever we go.”

It really does. When it’s time for the throne to leave its home, a team shed at the practice field, Haacke transports it in his pickup truck, following the team to its destination.

“They really respond well to it,” Berger said. “It gives the defense something to shoot for.”

Chalk it up to the throne, the chains or something else, but the Grizzlies are playing like one of the best teams in 4A. They’re 9-1, and on Friday, they will return to Bobcat Stadium in Rexburg to face Nampa in the state quarterfinals.

Their defensive teammates will play key roles, too. They may not star the way their offensive comrades do, so to make up the difference, they’ll roll out the chain and turnover throne.

If somebody gets to sit in it, well, the Grizzlies like their chances.