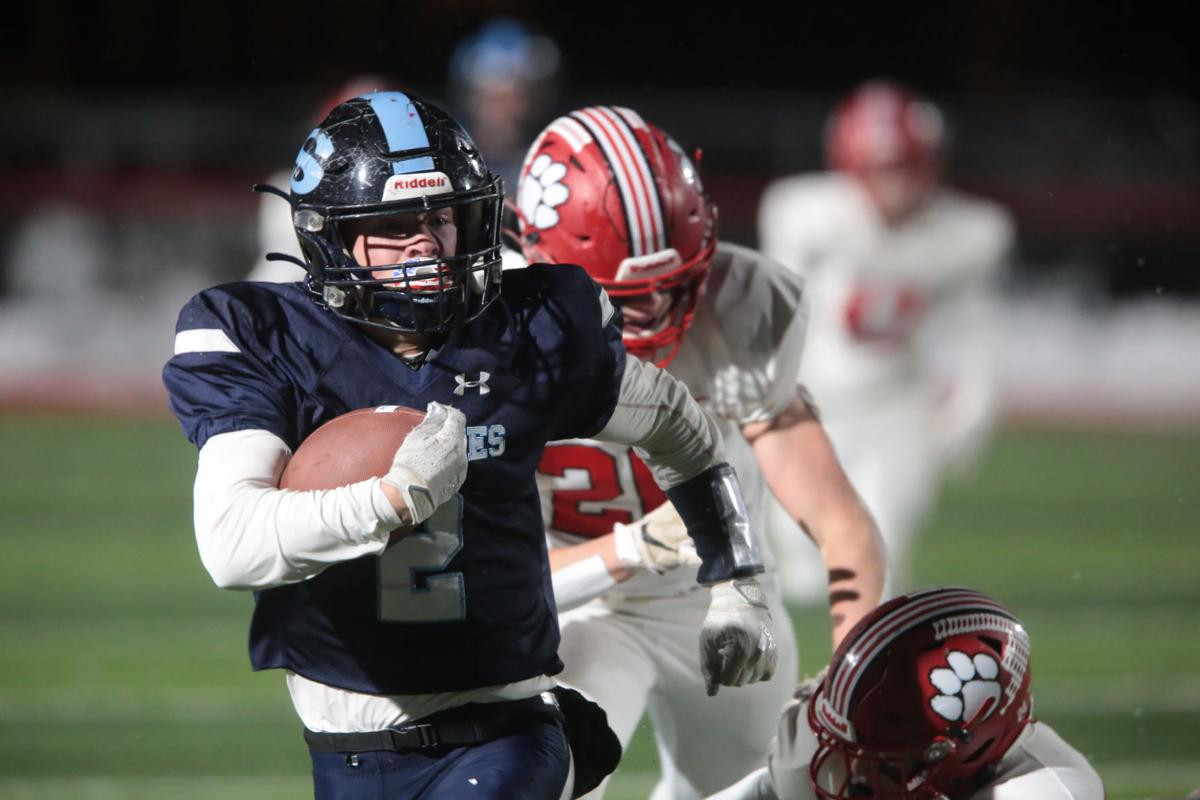 Skyline's Connor Maloney breaks loose from the Sandpoint defense during Friday's 4A semifinal at Madison High. 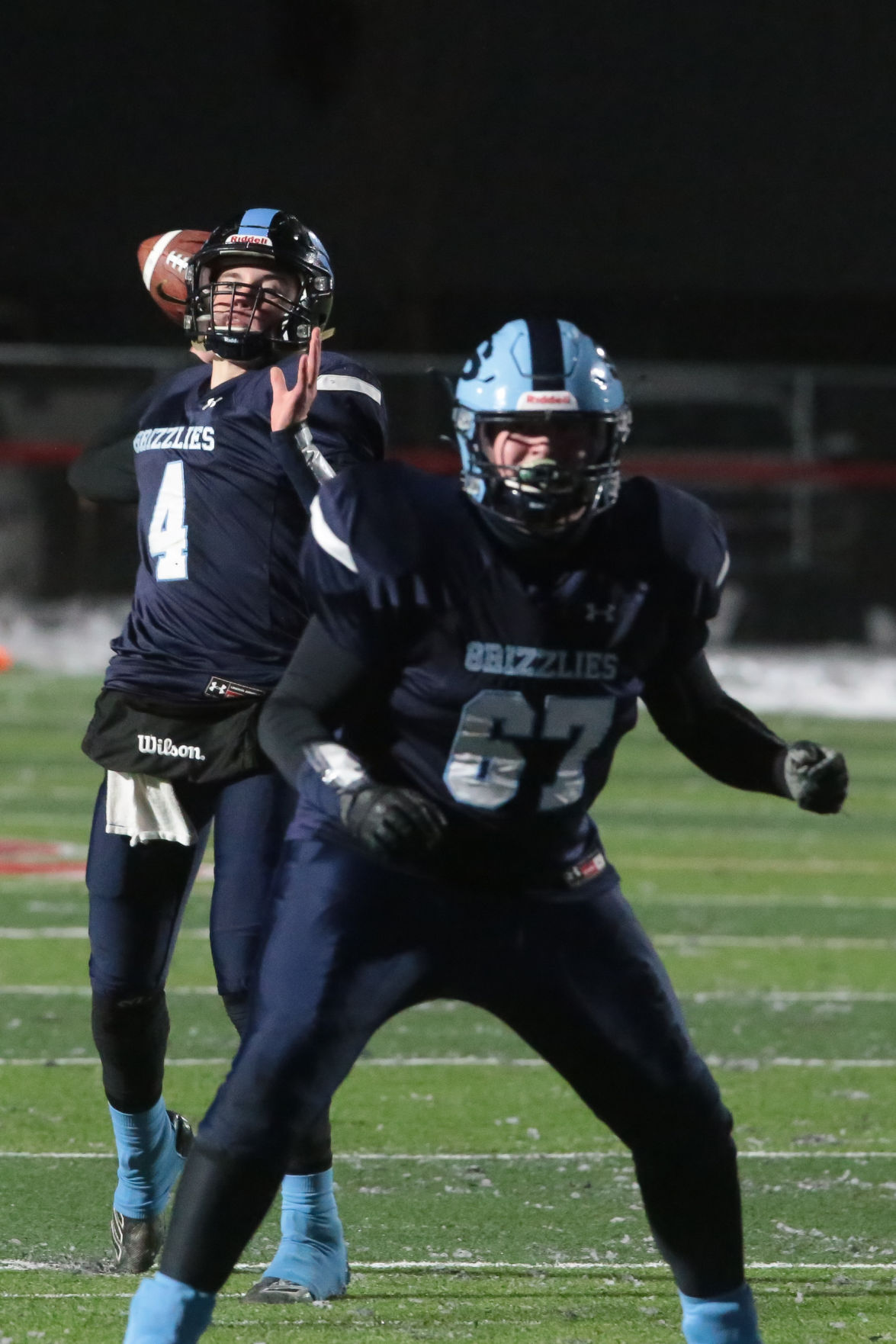 Skyline's Cade Marlow gets off a pass while guarded by Tyson Krupp during Friday's game against Sandpoint. 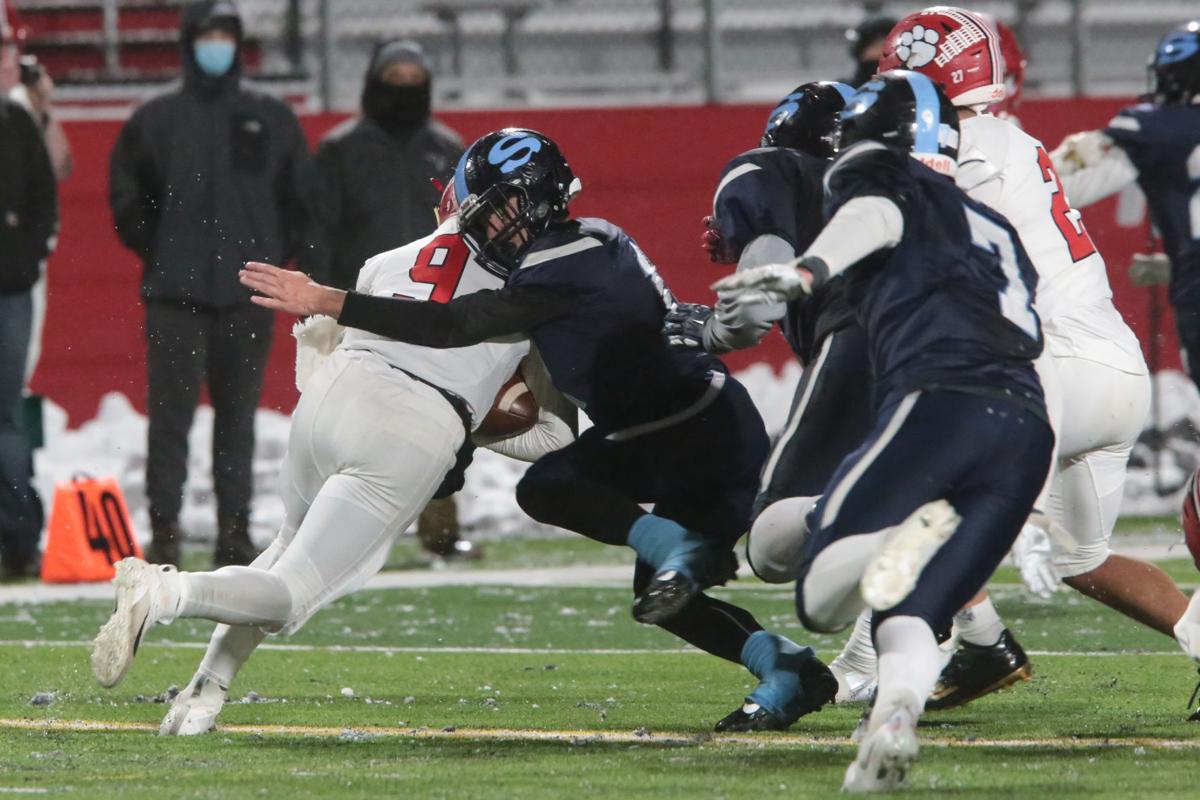 Skyline's Connor Maloney breaks loose from the Sandpoint defense during Friday's 4A semifinal at Madison High.

Skyline's Cade Marlow gets off a pass while guarded by Tyson Krupp during Friday's game against Sandpoint.

REXBURG — The play that earned Skyline a 20-0 win over Sandpoint in the 4A state semifinals Friday night may well go down in season lore, the killshot in a frigid dogfight for title game honors.

The one that opened the floodgates, though, represented the way the Grizzlies earned the opportunity, escaping rather vexing circumstances.

“After that sack, I feel like we all knew what had to be done,” defensive lineman Brixton Gilbert said. “And we could do it.”

Midway through the fourth quarter, Skyline defensive back Cooper Owen read the eyes of Sandpoint quarterback Parker Pettit, sprinted up and snared the pass, racing 30 yards the other way for a touchdown.

The score handed Skyline a 20-0 lead. The sideline spilled onto the field. Nine minutes remained, feasibly enough time for Sandpoint to mount a comeback, but the death knell rang for the Bulldogs.

The top-seeded Grizzlies were headed back to the 4A state championship game.

They will face Emmett on Friday. Time and location remain undetermined. The Grizzlies do not.

“It was nice to finally feel that joy of heading to a state championship,” said Owen, who suffered an ankle injury the week prior and worked back to game shape during the week. “We’ve been waiting for the state championship since we were in fourth grade.”

But the play that opened the door for Skyline (11-1) to advance to the championship game, where it captured back-to-back titles in 2016 and 2017, came several series earlier, late in the third quarter.

At the time, the scoreless gridlock stood strong. The Grizzlies had fumbled away two promising drives, but their defense shined, knocking away passes when Pettit threw and tracking him down when he scrambled.

On third-and-9, Gilbert bulldozed his way into the backfield and sacked Pettit. He flexed his muscles. Sandpoint punted.

That set the stage for Skyline’s offense, which finally broke through a 13-yard touchdown rush from quarterback Cade Marlow, who completed 15 of 26 passes for 160 yards and one touchdown.

The Grizzlies took a 6-0 lead because their PAT was blocked, but they could feel their offense starting to roar back to life.

“It was exhilarating,” Marlow said. “I was turning around, trying to find the first guy to celebrate with. It was so much fun.”

If that was fun, Marlow must have had a blast on his team’s next series.

The fun wasn’t over. Sandpoint’s next drive ended when Cooper picked off Pettit, who completed just 4 of 15 passes for 32 yards. In fact, Skyline held Sandpoint to just 100 yards of offense, including 68 on the ground. That translates to 2.3 yards per carry.

If that sounds like a surprise, it shouldn’t. Across its three state games this year, Skyline has pitched two shutouts and permitted 21 points in the quarterfinals to Nampa, which registered seven in garbage time. Gilbert leads a staunch defensive line. Owen and Alvarez patrol a secondary that has held two opponents to fewer than 100 passing yards.

“Going into this year, we felt as a defense that we could really have a successful season and be the impact defense that we know we can be," Skyline coach Scott Berger said,

Still, the picture of this game is incomplete without examining the first half.

Things could have turned bleak for Skyline. The Grizzlies produced two sterling drives, moving deep inside Bulldog territory — only for fumbles to wipe out the series.

On the first occasion, running back Bridger Swafford coughed up a fumble at Sandpoint’s 16. On the second, Silverio did the same at the Bulldogs’ 30.

Consider the numbers and the magnitude of those turnovers zooms into focus. In the first half, Skyline outgained Sandpoint 163-80. The Grizzlies churned out 4.5 yards per carry, while the Bulldogs managed just 2.8. Skyline’s offense was far from perfect — Marlow tossed a fourth-down incompletion, and Sandpoint had Skyline’s number at some turns — but the Grizzlies didn’t help themselves.

“It really did come down to those two turnovers, for sure,” Marlow said of his team’s early struggles. “We knew we could move the ball on them. Our goal going into this game was a positive play every play. Those negative plays, where it’s an incomplete pass or you get a penalty, that just kills your drive. So we knew we had to stop that, and limit our turnovers as best we could.”

This was a unique win for Skyline, both in terms of style and weather. Snow piled onto the field as the game wore on, which Marlow said forced his team to run more than it prefers. The Grizzlies also did so without receiver Eli Ames, who suffered a groin injury against Nampa.

It resulted in a slow, defensive struggle, the kind the Grizzlies often impose but rarely suffer themselves.

That they triumphed in the most crucial spot means everything to this team. The seniors were around for their team’s 2017 title, but now they have a chance to star in one, the reward for reeling off a win streak that started on Sept. 18.

To reach the mountaintop again, they’ll have to win one more.

Good thing they’re so accustomed to doing so.