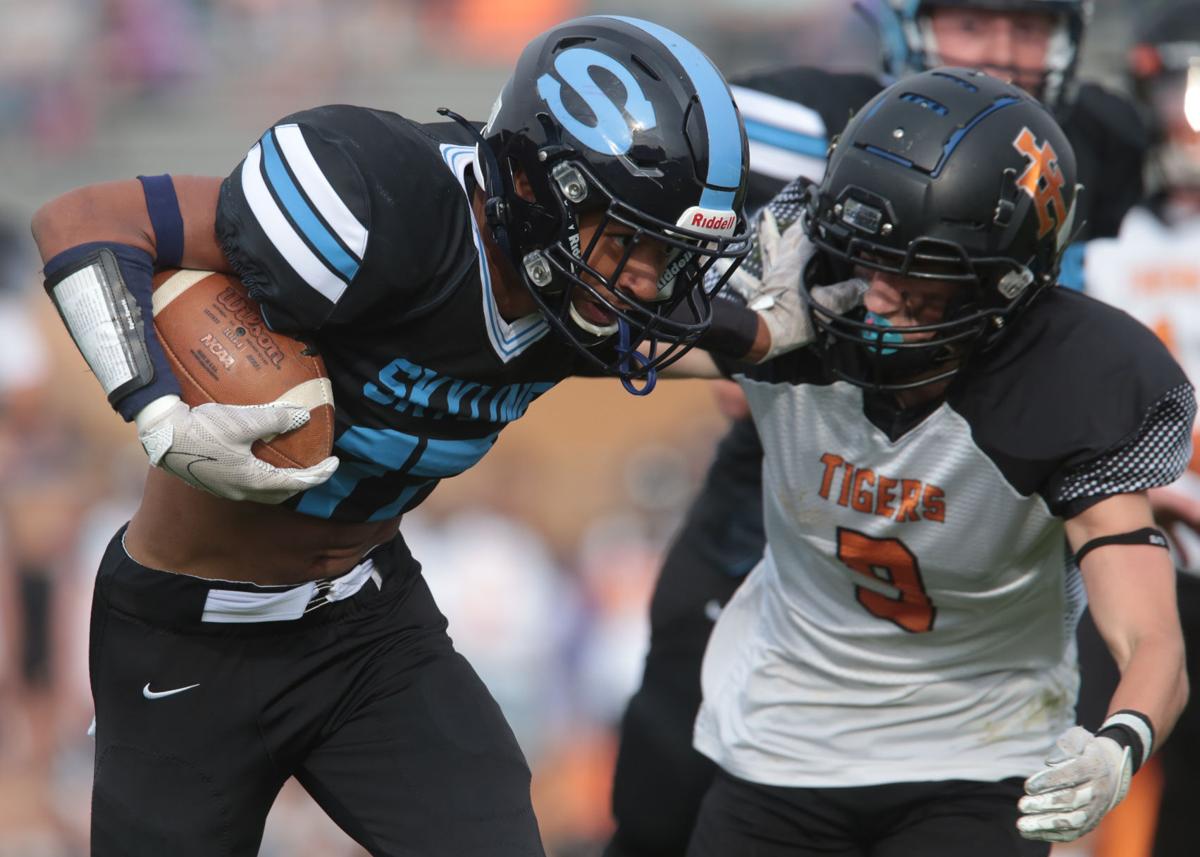 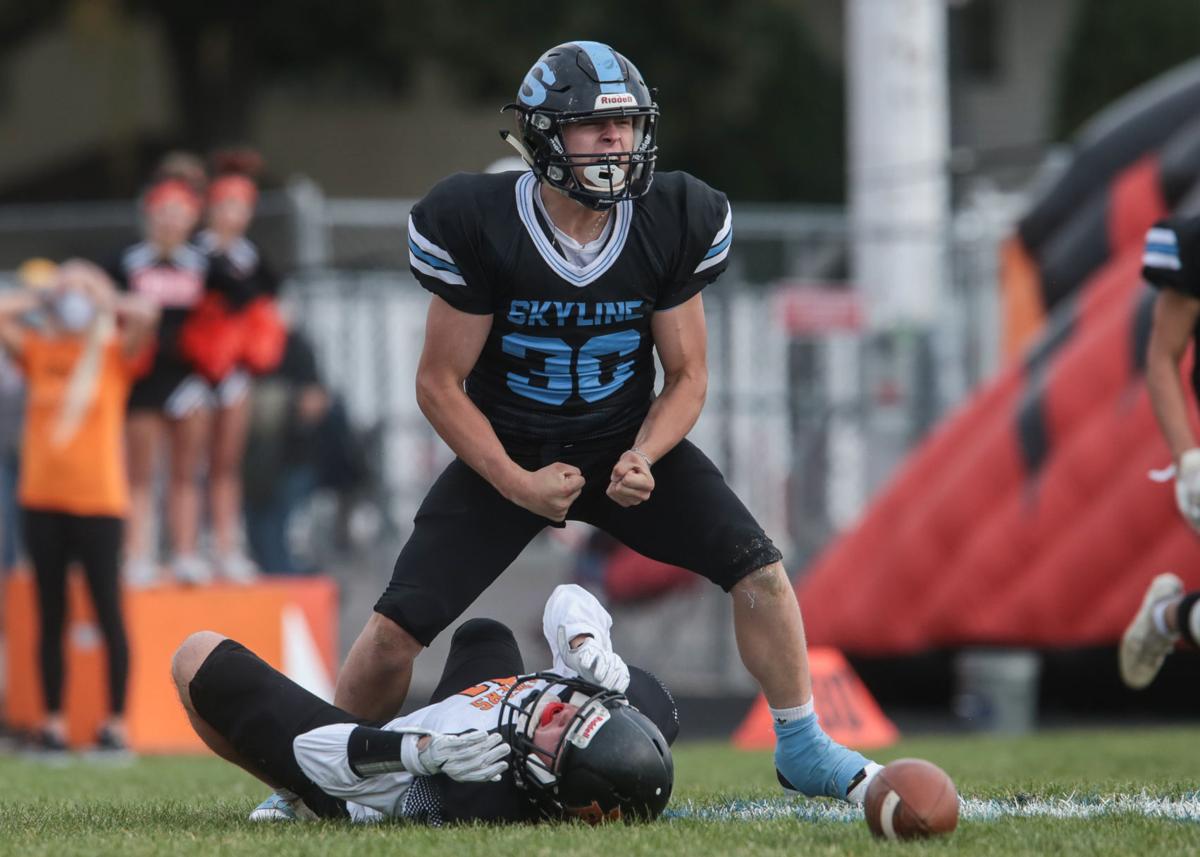 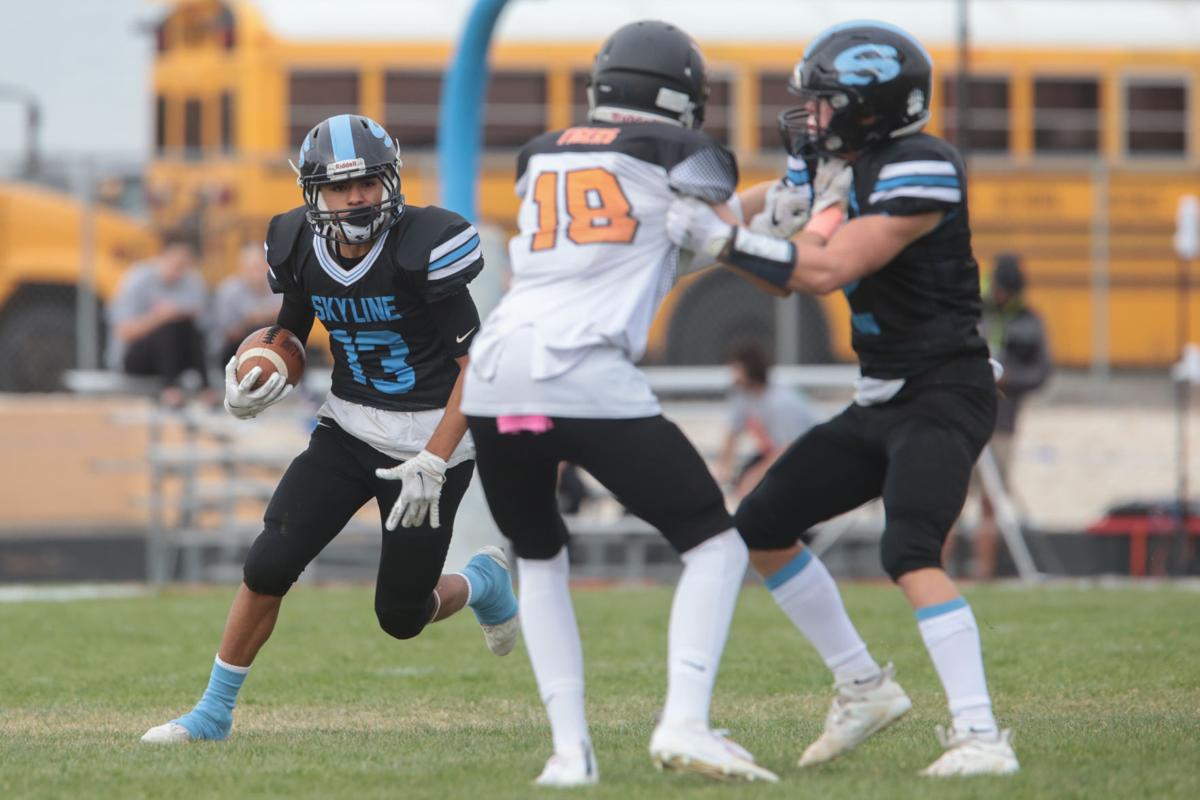 Davien Cruz runs the ball as Skyline takes on Idaho Falls during the Emotion Bowl at Ravsten Stadium on Saturday, Oct. 10, 2020. 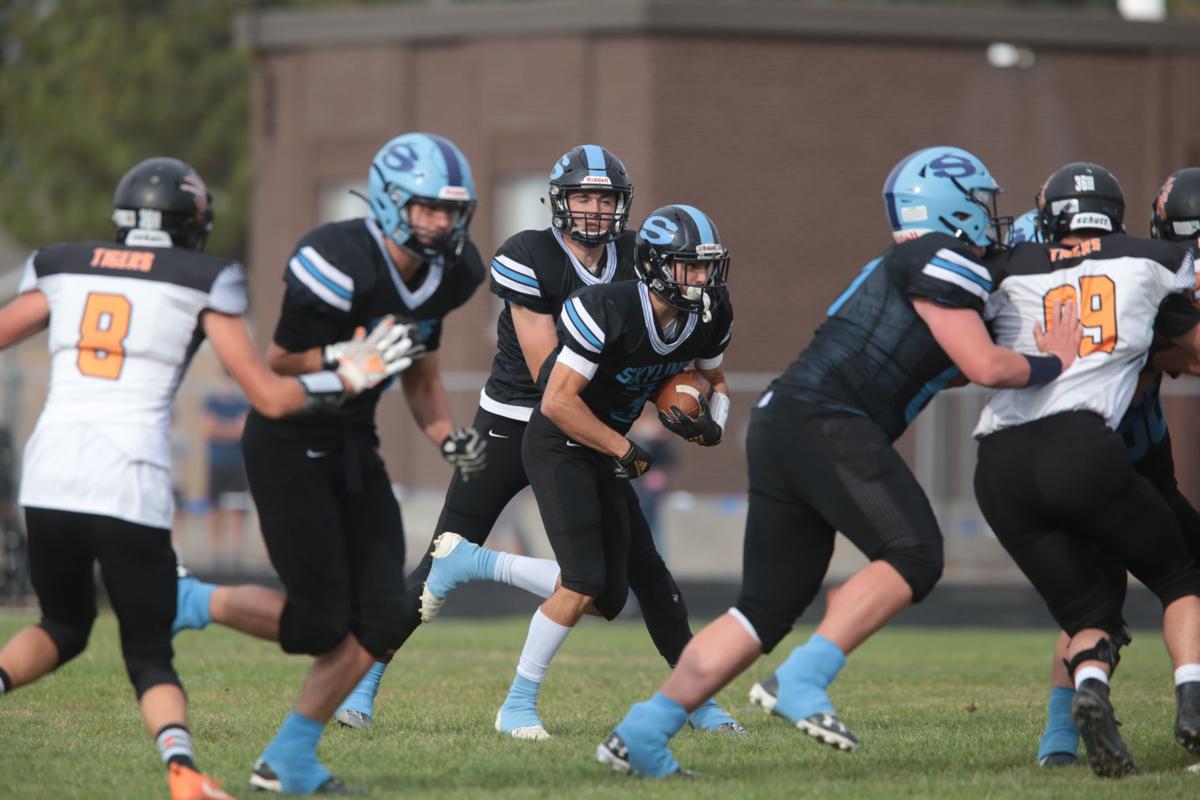 Eli Ames runs the ball as Skyline takes on Idaho Falls during the Emotion Bowl at Ravsten Stadium on Saturday, Oct. 10, 2020.

Davien Cruz runs the ball as Skyline takes on Idaho Falls during the Emotion Bowl at Ravsten Stadium on Saturday, Oct. 10, 2020.

Eli Ames runs the ball as Skyline takes on Idaho Falls during the Emotion Bowl at Ravsten Stadium on Saturday, Oct. 10, 2020.

Loudspeakers blasted rock music and fans exchanged hugs as the clock ran out on Skyline’s 40-9 thumping of Idaho Falls Saturday evening. The Grizzlies, the happiest bunch in the city for the night, removed their pads and helmets for more comfortable clothes and dashed over to the east end zone.

There, some climbed atop the uprights, celebrating their school’s seventh straight win in this Emotion Bowl rivalry. As is tradition, players on the ground produced cans of blue spray paint, lathering their teammates in blue dye as they laughed and talked and enjoyed the spoils of yet another lopsided win in this matchup.

They painted the Ravsten Stadium uprights, too, but those have been blue since 2014, when the Grizzlies kicked off this seven-game winning streak.

The paint was new. Its color was not.

“Not really,” said Skyline receiver Eli Ames, evaluating whether he likes the odor of the paint. “But you’ve got to do it.”

The 56th edition of the Emotion Bowl may have been the weirdest — the limited number of fans in attendance were encouraged to wear masks and social distance, though many of them did not — but really, it was one of the most normal.

There’s a reason why Idaho Falls’ last win in the matchup came in the 49th edition.

Skyline quarterback Cade Marlow completed 11 of 16 passes for 182 yards, three touchdowns and and two interceptions, supplying a scintillating scoring punch through the air while his teammates did the rest on the ground.

Seven different Grizzlies (6-1) recorded rushing yards in the win. The leaders were Ames, who carded six carries for 43 yards, sophomore Abrahn Silverio, who registered a 15-yard rushing touchdown and Bridger Swafford, a reserve who capitalized on the uneven score and tallied six carries for 32 yards and a touchdown.

“We’ve got a lot of weapons,” Skyline coach Scott Berger said. “Connor Maloney, Eli Ames, Jace Eames, Swafford, Abrahn Silverio, Kenyon Sadiq. We’ve got some guys that can score and take it to the house.”

Skyline’s offense only enjoyed such a cushion, though, because its defense turned Idaho Falls (0-7) to dust.

Tiger quarterback Skyler Olsen completed just 12 of 26 passes for 142 yards, including one rushing touchdown. He rarely had enough time to pass, even when the Grizzlies only rushed three, and when he did, his accuracy fluctuated.

He didn’t play the whole game, though. In the second half, he picked up his second personal foul of the game, resulting in his ejection from the game. Idaho Falls coach Marty Duffin said officials will decide over the weekend whether Olsen will be able to play in his team’s road matchup with Madison on Saturday.

Even so, that was hardly the Tigers’ most pressing problem in the loss. Their offense sputtered, but their defense crumbled, watching as Skyline receivers burst through the secondary and running backs churn out big chunks of yardage.

Skyline totaled 143 rushing yards, good for an average of 5.5 yards per carry.

“Skyline just came out more aggressive than us and made plays that we didn’t," Duffin said. "Hats off to them. They played a better game than we did.”

The Grizzlies scored touchdowns on all four of their first-half possessions. They even scored with the offense on the sideline.

In the first half alone, Marlow completed 10 of 13 passes for 162 yards and three touchdowns for the Grizzlies, who scored additional touchdowns on the ground and on a punt return, courtesy of Ames.

In fact, Ames also helped the Grizzlies score on the third play of the game. Marlow dropped back and spotted a wide open Ames, who the Tigers had neglected to cover. The pass was perfect, Ames hauled it in and did the rest, racing 77 yards into the end zone.

Skyline’s defense did its part early, too.

Olsen connected on just 8 of 19 passes for 104 yards in the first half, but most of those completions came early in the game. The Grizzlies’ secondary made things harder as the game went on. The Tigers had no answer.

It added up to a 34-0 Skyline lead after one half.

Not much changed in the second.

The game will leave both teams in largely the same position, mostly because this wasn’t a conference affair. Still, the Grizzlies remain at the top of theirs. The Tigers reside in the cellar.

“It’s special,” said Berger, whose team will host Hillcrest on Friday. “I mean, look at how much this means to the west side and the kids. To Skyline High School. That’s what…”

Berger trailed off. He closed his eyes, a turquoise mask covering the rest of his face, taking a moment to himself while his players passed around the rivalry trophy.