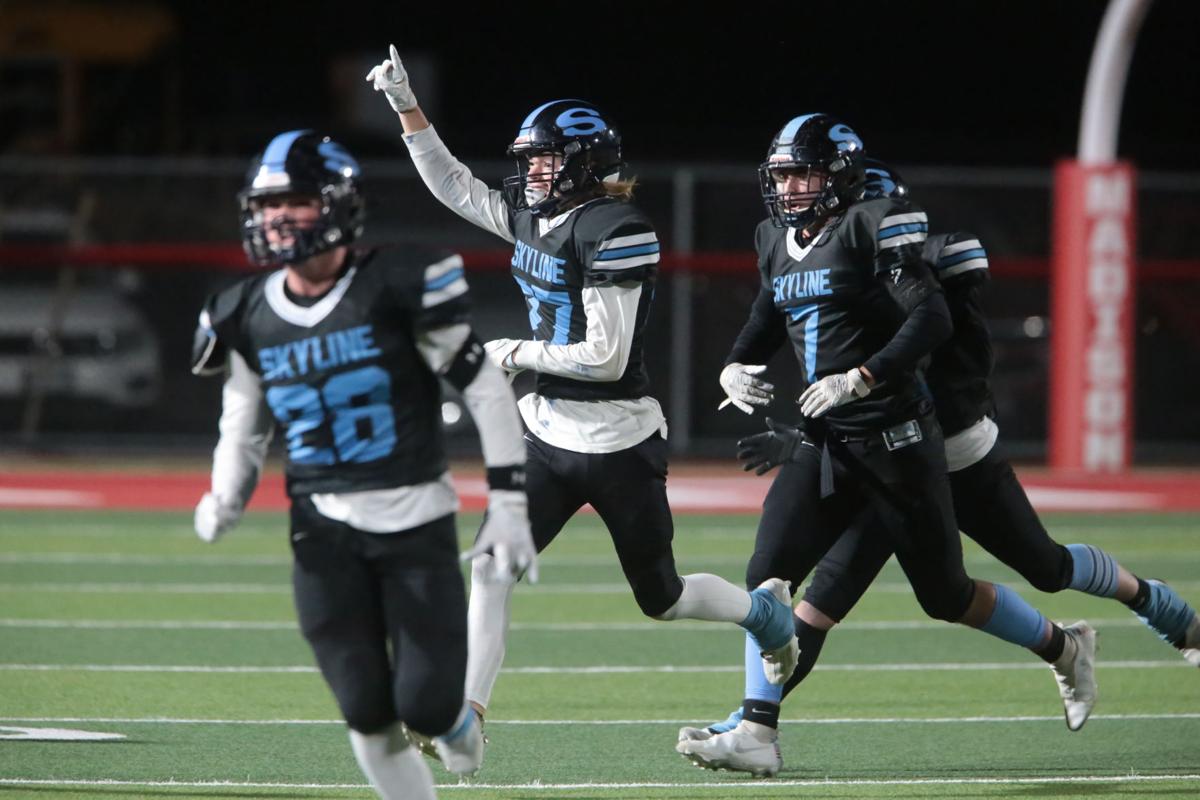 Graycen Benson reacts to a play as Skyline takes on Nampa at Madison High School on Friday. 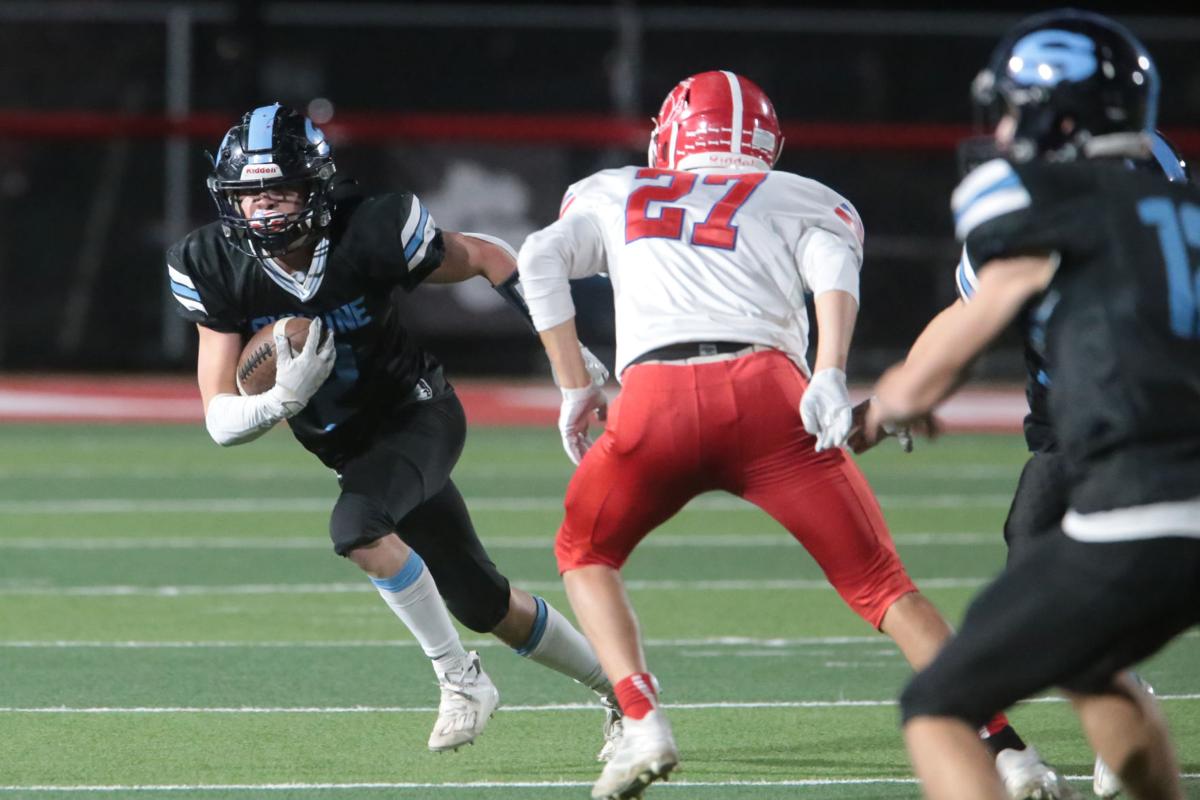 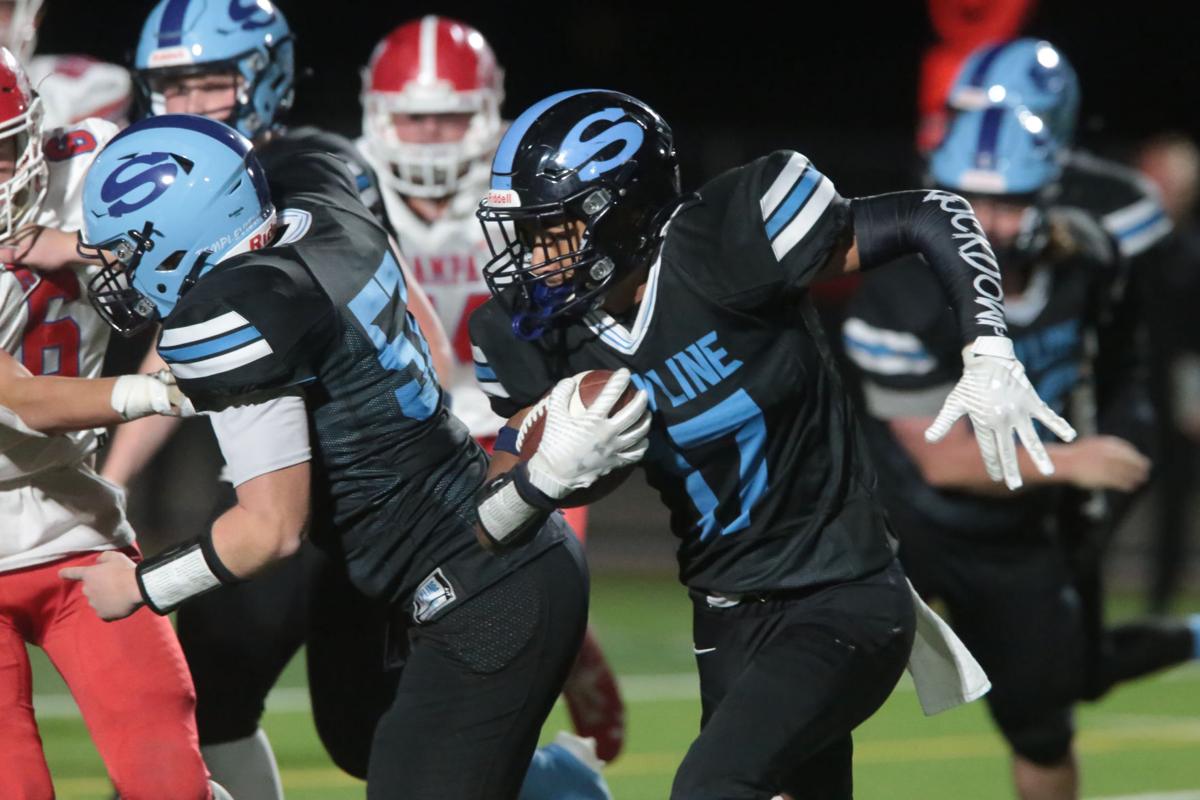 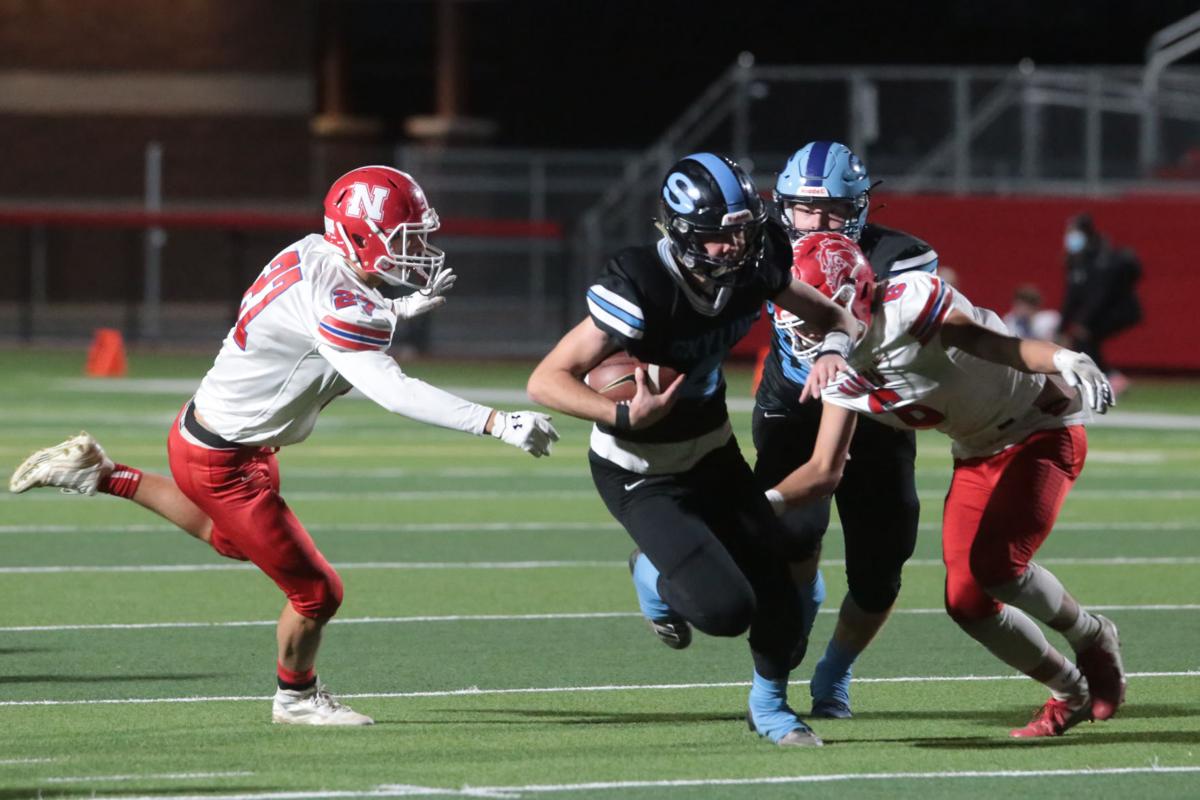 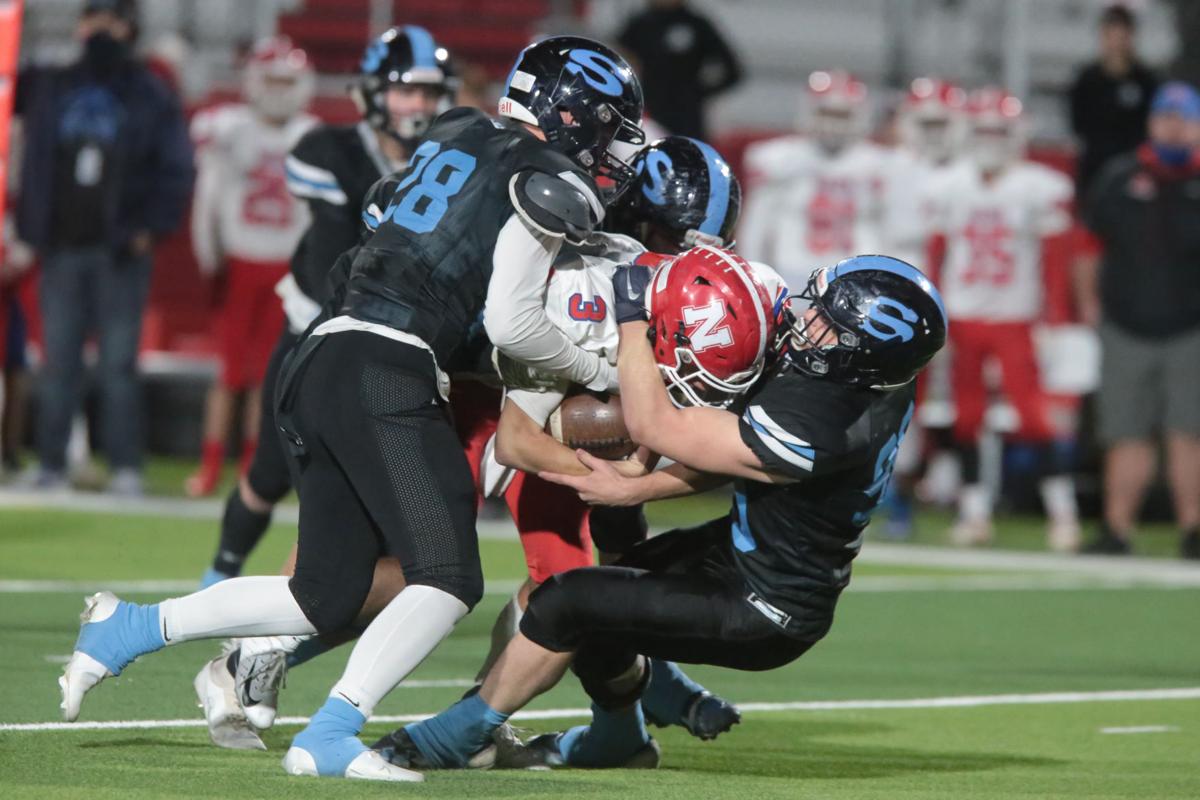 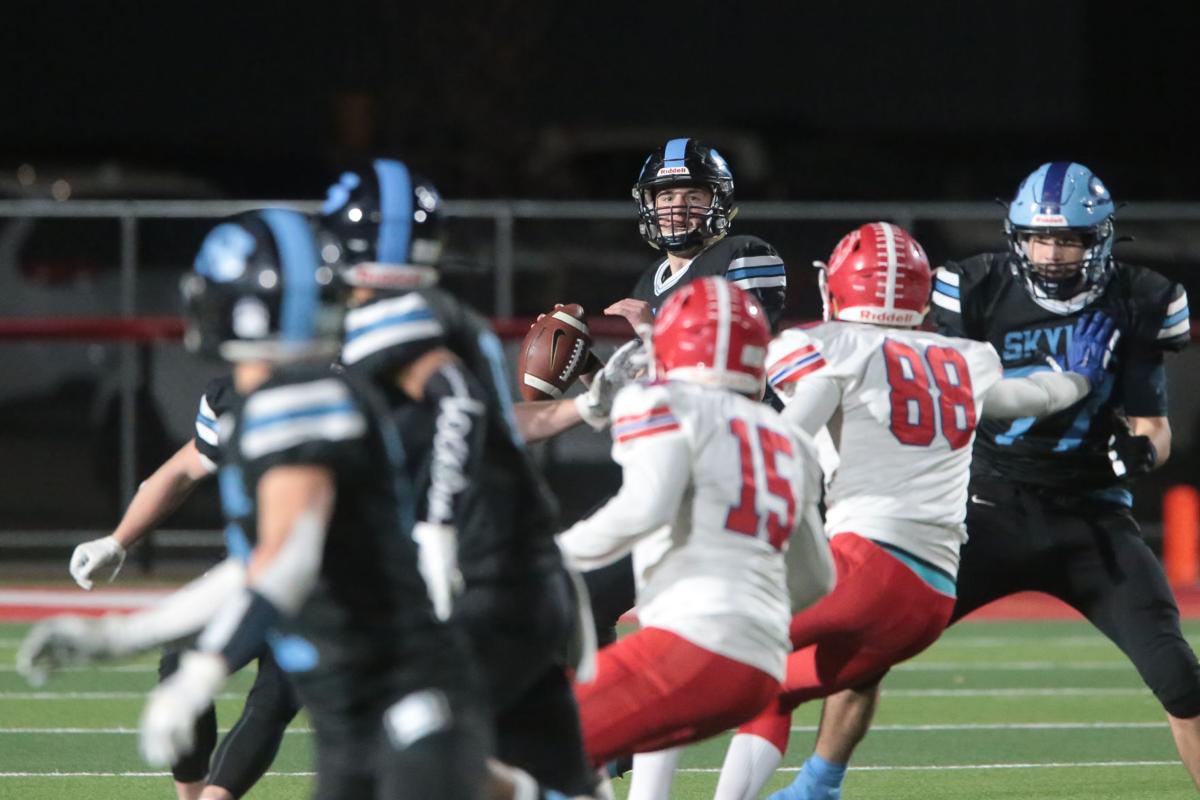 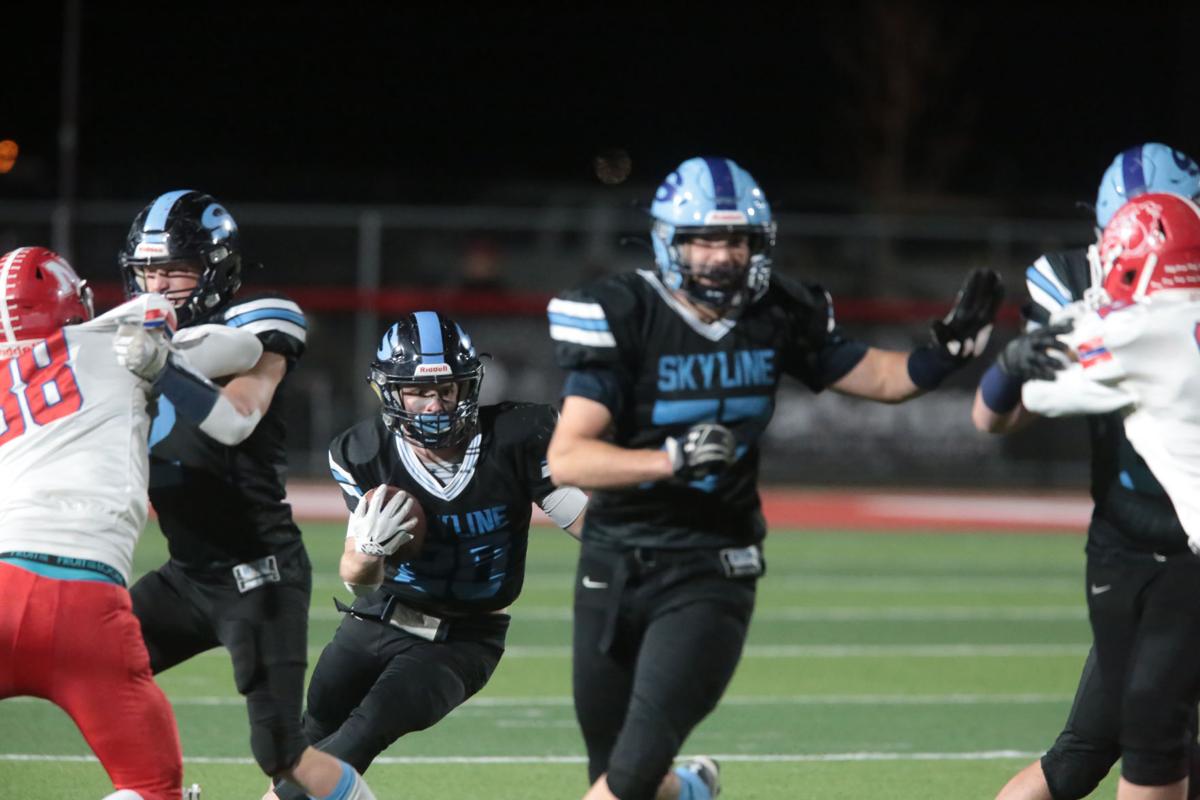 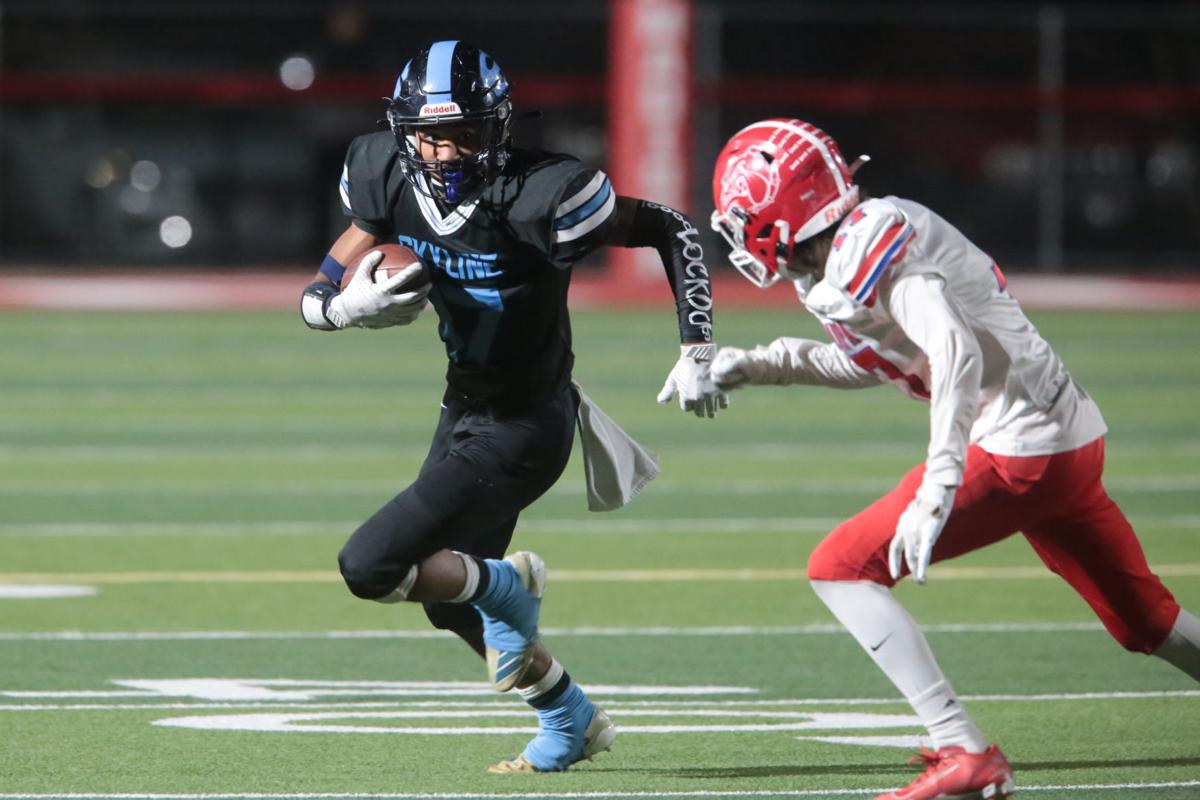 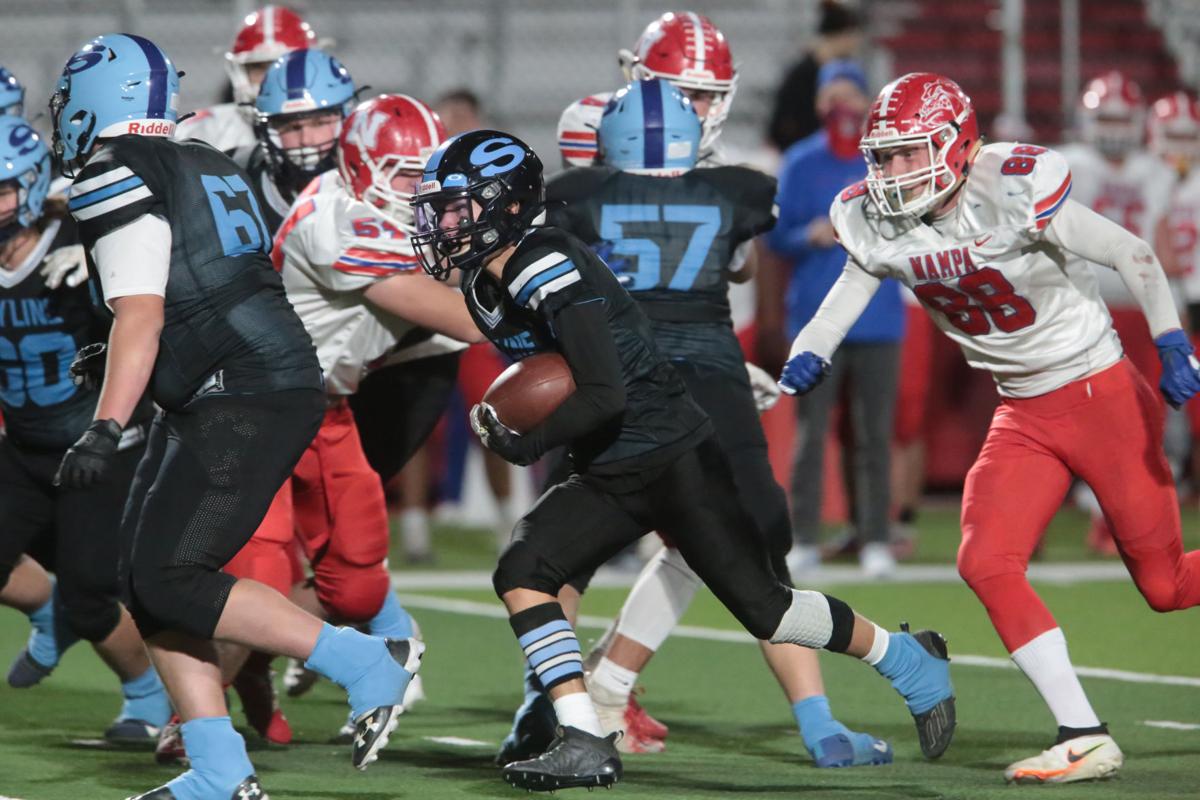 Graycen Benson reacts to a play as Skyline takes on Nampa at Madison High School on Friday.

REXBURG — The image was striking, if not foreboding. On the sideline sat two injured Skyline players: receiver Eli Ames and defensive back Cooper Owen, unable to help their team build a comeback early against Nampa in the 4A state quarterfinal.

The Grizzlies needed help. Two of their most important players couldn’t provide it.

"We always talk about 'next man up,'" Skyline coach Scott Berger said. "You've got to step up and make plays."

That the Grizzlies had few problems doing so, securing a 42-21 win over Nampa Friday night, illustrates why they hold the top seed in 4A. Skyline has something resembling an embarrassment of riches on offense. They weaponized them in their second straight win at Madison’s Bobcat Stadium.

Quarterback Cade Marlow completed 12 of 17 passes for 126 yards and one touchdown, receiver Abrahn Silverio erupted for 12 carries and 127 yards and two scores and Connor Maloney scored three touchdowns. It was a combination No. 1 Skyline (10-1) has used often this season. It was just never so important.

"That's nice, when you can have people step up and take a spot of an impact guy like Eli," Berger said. "Hopefully Eli can play next week. It takes everybody to win games."

Skyline’s reward is a spot in the 4A semifinals Nov. 13. The Grizzlies will host Sandpoint at this same location.

"It's amazing," said running back Bridger Swafford, who supplied five carries for 46 yards and a touchdown. "We haven't done it (advanced to the semifinals) since my freshman year, and it blows my mind that we've gotten this far. We're this close to getting there."

Perhaps the most striking thing from this Skyline win was the difference in each team’s offense. The Grizzlies won, in part, because they have enough weapons to cover for injuries like Ames’.

"Definitely one of my best games of the season, for sure," Silverio said.

Even so, the Grizzlies’ defense sizzled. Lineman Brixton Gilbert delivered crushing blows on Plew. C.J. Reinhart made key tackles. In the fourth quarter, Parker Kucera picked off a pass, which set up a Skyline touchdown from Silverio and pushed the Grizzlies’ lead to 42-14.

Plew completed just 16 of 30 passes for 227 yards, one touchdown and that one interception.

Meanwhile, Marlow and Skyline detonated Nampa’s defense. The Grizzlies didn’t lose a single turnover. They totaled 224 yards on the ground and 179 through the air. They averaged 7.5 yards per carry.

Wait — how does that happen?

"Blocking," Swafford said. "Our blocking is just amazing. Our runners were able to read the holes."

Nampa drew first blood on its first series of the game. Plew found his favorite target, Butler, downfield for 34 yards. Butler muscled his way into the end zone and Nampa took a 7-0 lead.

Skyline responded immediately. The Grizzlies drove from their own territory to the Bulldogs’ 1-yard line, where Marlow handed a jet sweep to Maloney, who darted in for six. Tie game, 7-7.

That’s when disaster struck for Skyline. Two series later, Ames came out with what Berger called a hip injury. One drive after that, Owen left with a foot ailment. Neither returned for the rest of the game. Owen stood on crutches afterward.

Berger said he remains hopeful that both will be available for the state semifinal, but he expects to know more by Monday or Tuesday.

Later, on third-and-12, Plew unfurled a rainbow toward the right sideline to Butler, who hauled it in through double coverage. One play later, Carrillo scored from seven yards out, pushing Nampa in front, 14-7.

The momentum didn’t last. Two Skyline possessions later, Silverio looked like the best player on the field. He reeled off three straight rushes: 18 yards, then 24 yards, then a 7-yard rush into the end zone, bowling over Bulldogs to help the Grizzlies draw within one.

Same play. Three times in a row. If that sounds remarkable, it's because it is, but the series planted something in the Grizzlies' minds.

"I think that kind of sparked a fire," Silverio said. "We were just like, 'All right, we've got to go. This is our time.' Didn't put our heads down. We just had to keep working."

Skyline erased it minutes later. Starting from their own 20, the Grizzlies covered 80 yards in about two minutes, getting big chunks through the air and on the ground alike. Swafford punctuated the drive with a two-yard touchdown rush, and with a two-point conversion, the Grizzlies took a 21-14 lead.

It stood at halftime.

Now, the Grizzlies are on to the state semifinals for the first time since 2017.

They won state that year — for the second straight time.

They aren't there now, but they're close. They've won their first two games at state by an average of 35 points. Their defense is dazzling and their offense is cruising, even without key cogs.

"Never played them before," Berger said. "I always tell the kids, 'It's not the who we play, it's the how we play.' That's what it's all about."