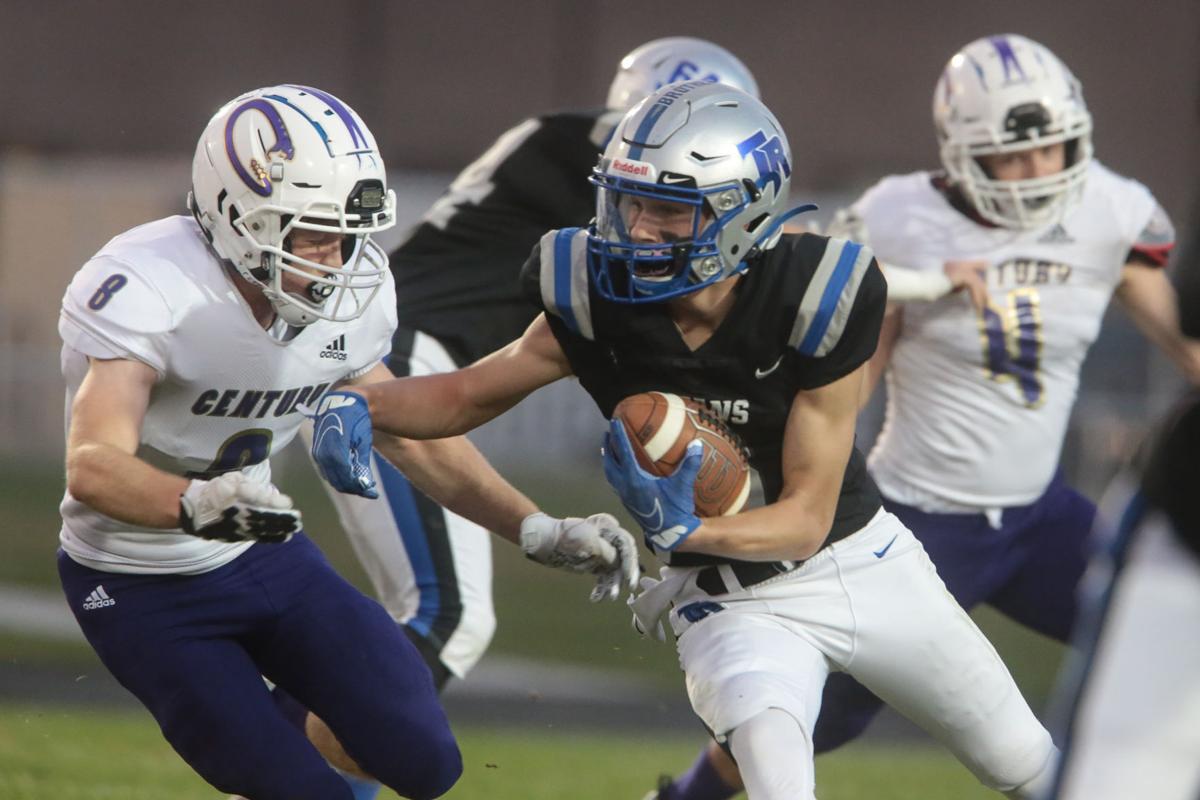 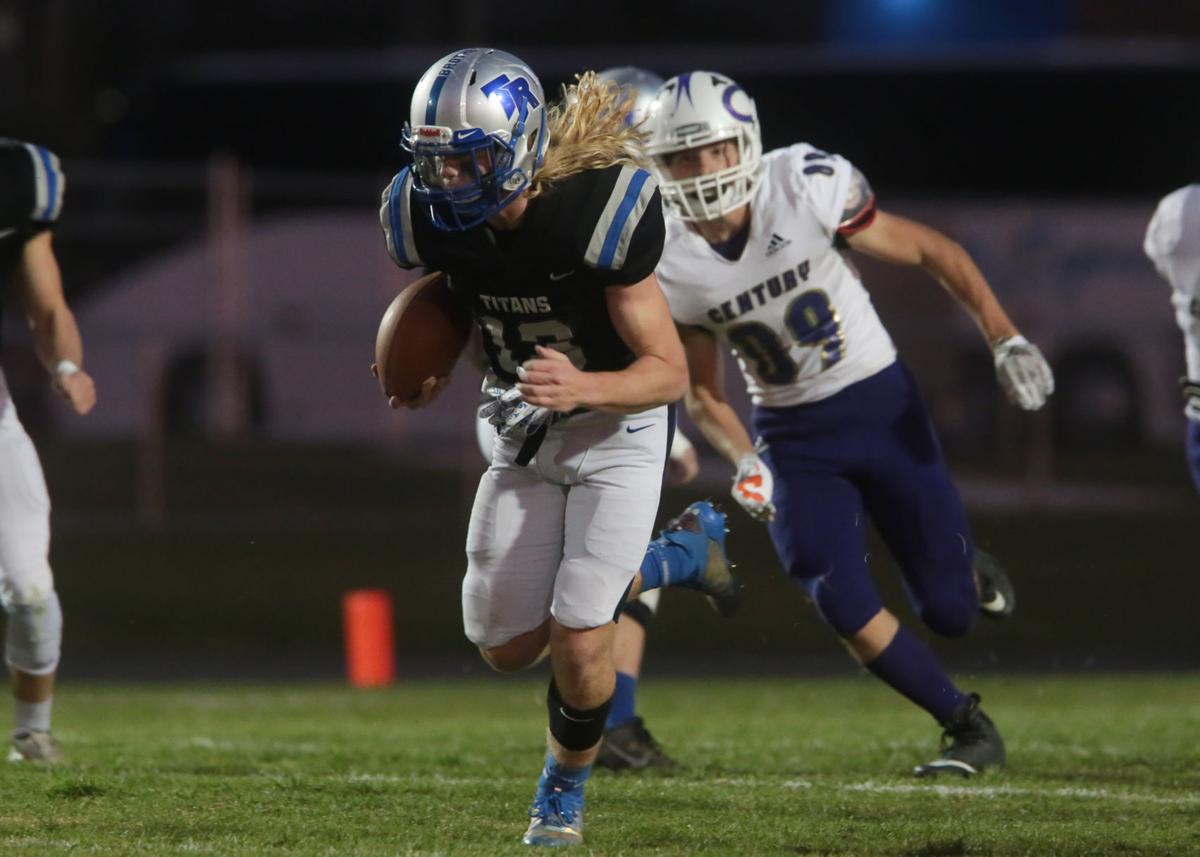 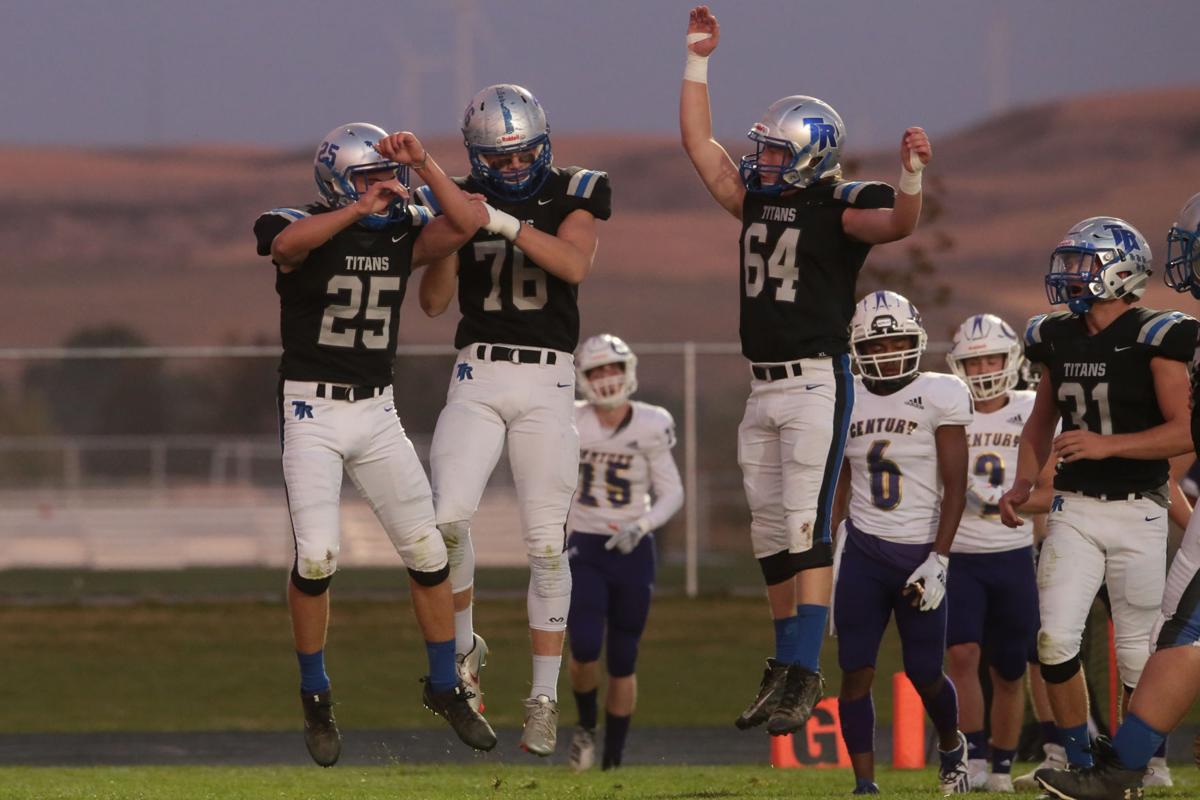 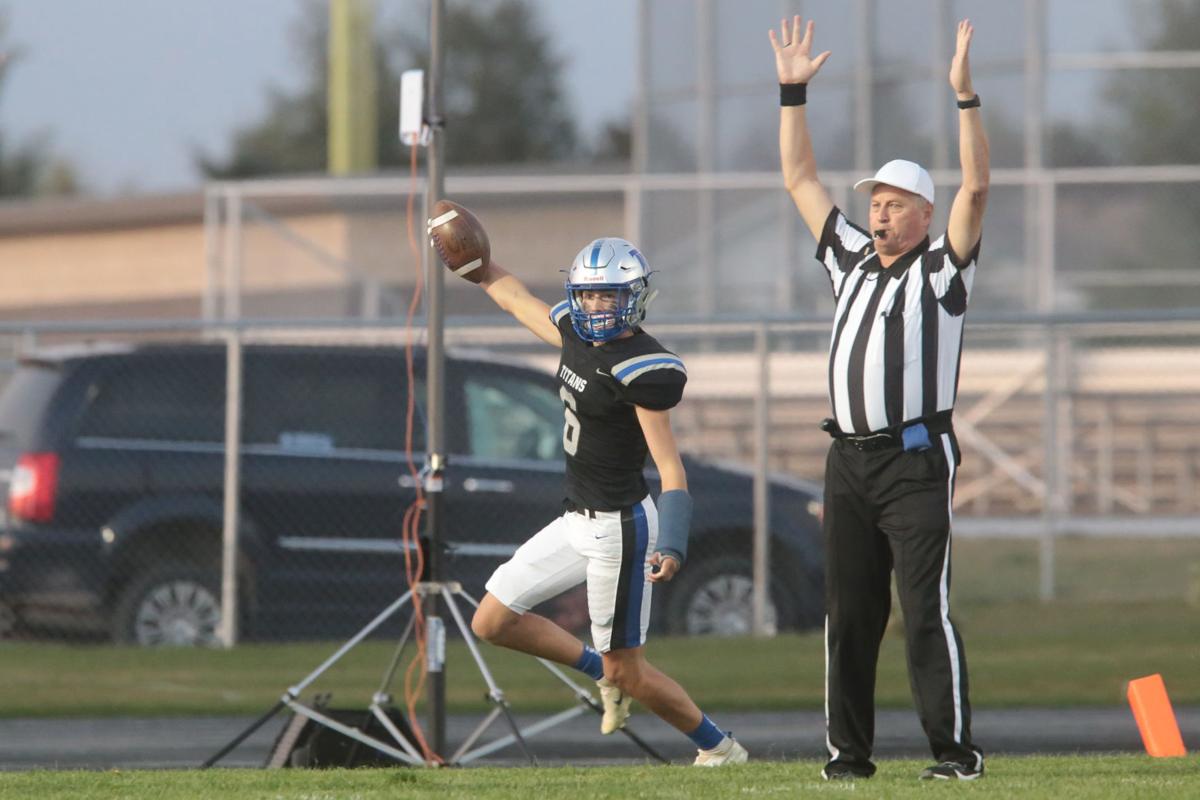 Grant Carter Jardine runs in for a touchdown as Thunder Ridge takes on Century at Thunder Ridge High School on Thursday, Oct. 1, 2020. 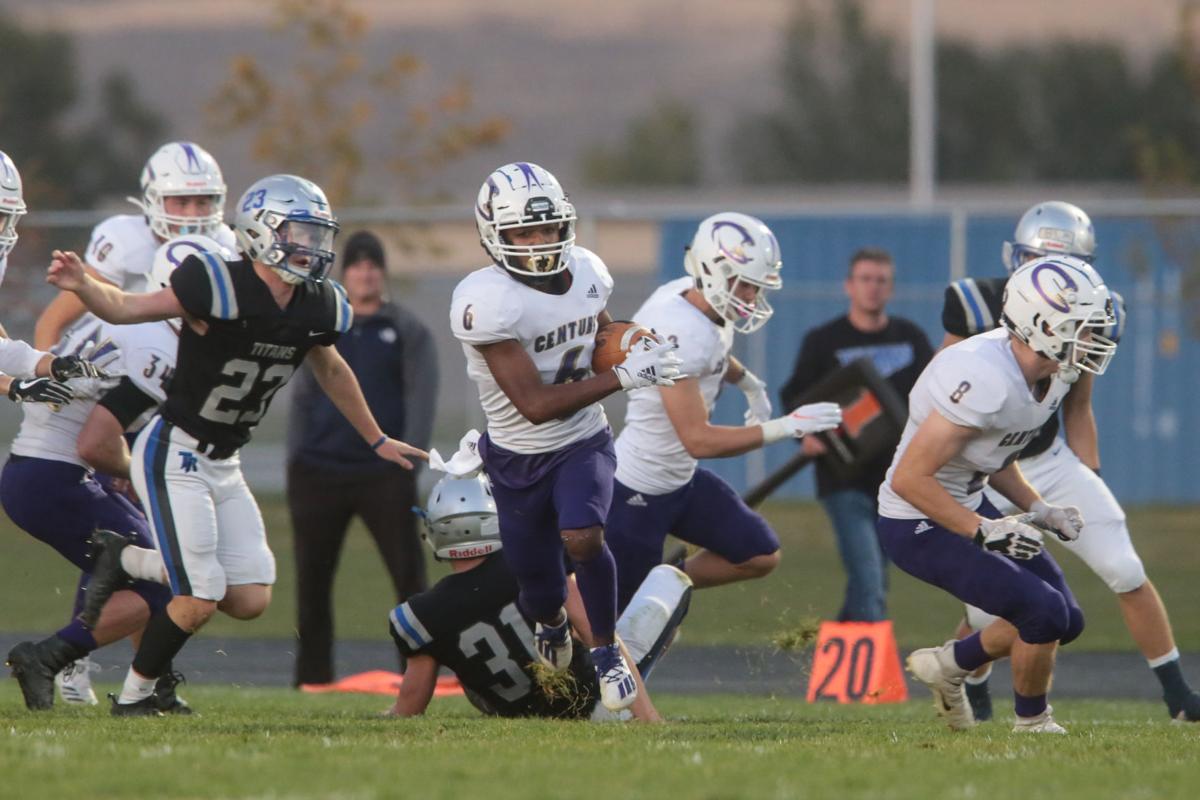 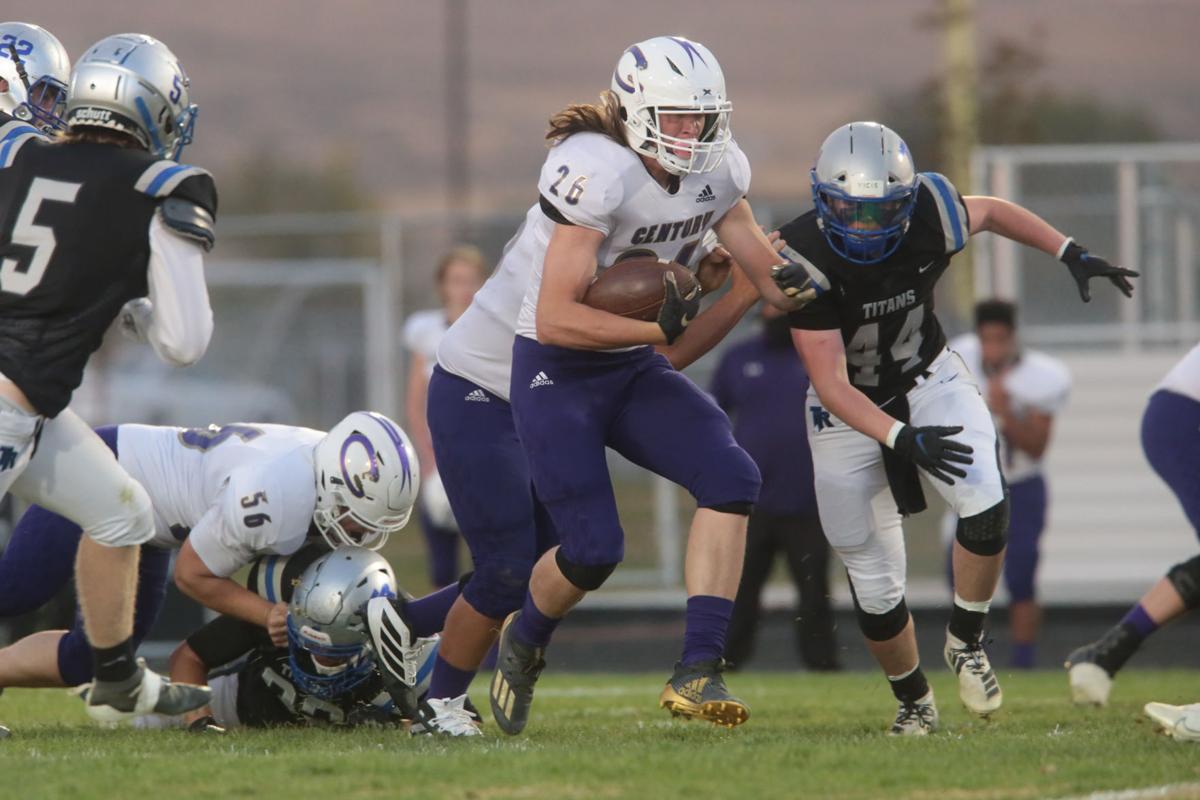 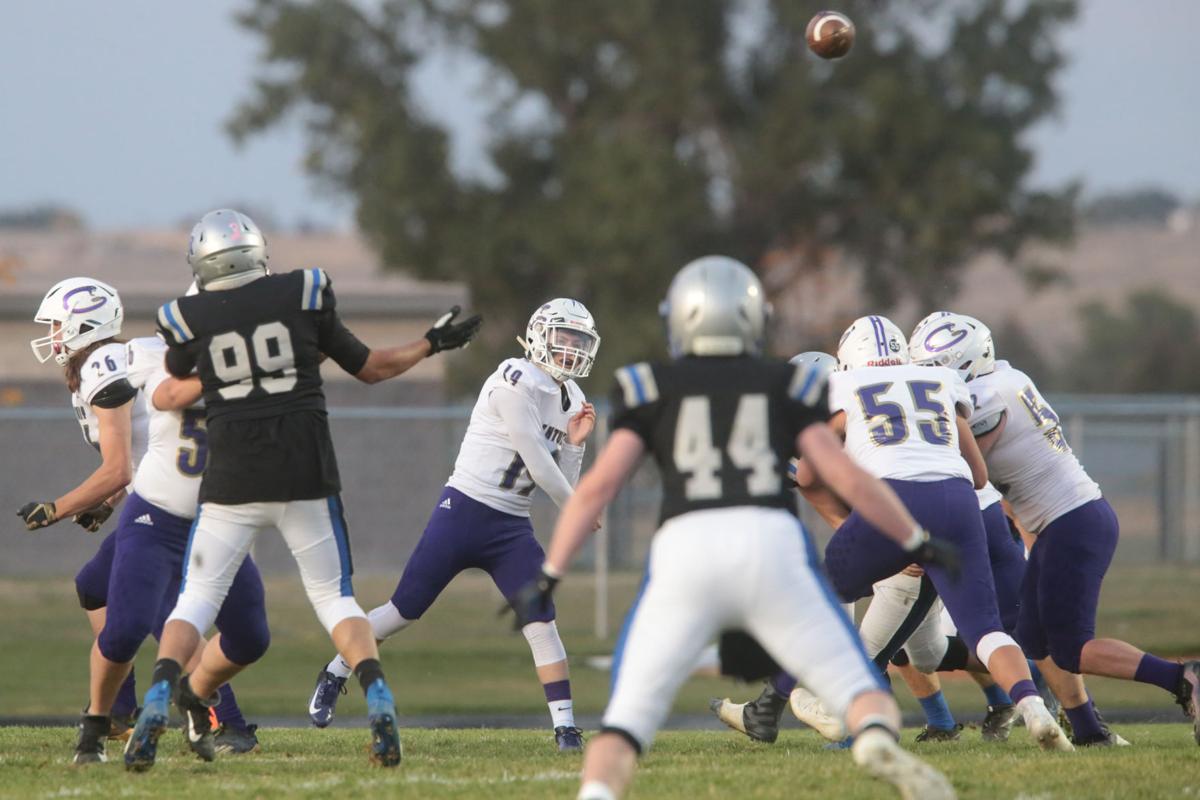 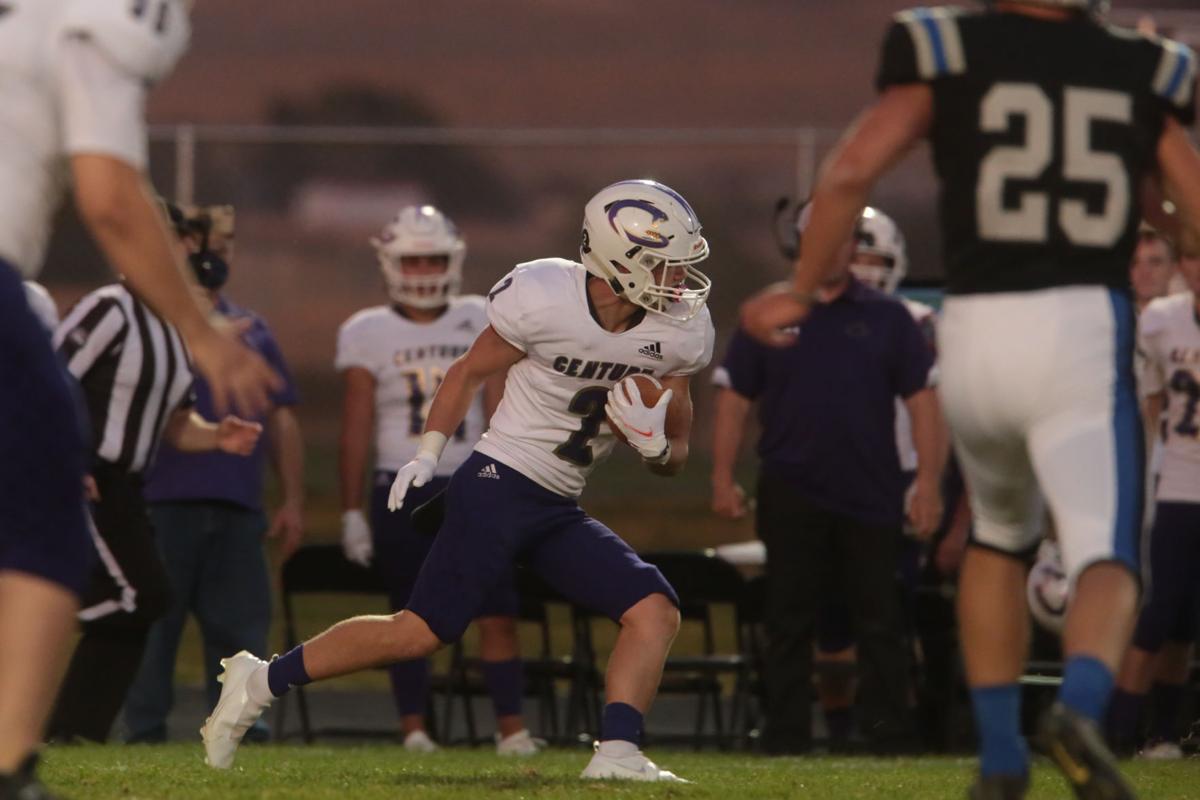 Grant Carter Jardine runs in for a touchdown as Thunder Ridge takes on Century at Thunder Ridge High School on Thursday, Oct. 1, 2020.

Halftime neared as Thunder Ridge’s impromptu quarterback, Kaysen Isom, called for the shotgun snap. He handed it to backfield mate Jaden Sautter, who identified a crease, burst through it and sprung into the open field, angling toward the right pylon.

Only one Century defender raced close enough for a tackle. He laid out around the 5 and tripped Sautter, who fumbled as he fell into the end zone. Sautter pulled the ball back into his body.

That’s the kind of scene that best captures Thunder Ridge’s 48-28 win over Century Thursday night. The Titans rolled, and even when the Diamondbacks showed signs of life, it never amounted to much.

Thunder Ridge has won two of its last three.

Thunder Ridge (2-4) won because it forced turnovers, but also because it capitalized on them. The Titans forced five in the first half alone. They turned all but one into touchdowns.

Isom, playing quarterback because the team’s first two options are both out with collarbone injuries, generated gaudy numbers: 17 carries for 188 yards and one touchdown. He completed 2 of 4 passes for 15 yards and a score, and he rarely needed to throw. The Titans faced little resistance on the ground, so they stuck to it.

Sautter, one of his team’s more unlikely stars, featured prominently. The junior carded 14 carries for 100 yards and three touchdowns.

All told, Thunder Ridge posted 429 rushing yards. Three different Titans scored on the ground. Their numbers dipped in the second half — they carried 20 times for 114 yards in the final 30 minutes — but only because they could afford to.

That Thunder Ridge allowed Century to score three touchdowns in the second half and still won by three scores illustrates just how thoroughly the Titans handled the Diamondbacks.

“We had a Murphy’s Law kind of game,” Century coach Travis Hobson said, “where everything that could go wrong did. I think that’s the first time in a long time — if ever — I’ve seen us turn the ball over twice in the first two minutes of a game. That’s not a hole. That’s a cavern.”

In the first half, the Diamondbacks dug themselves a deep one.

In fact, Thunder Ridge senior Grant Jardine scored the game’s first touchdown, returning a McKean Romreill interception some 20 yards for a touchdown. On Thunder Ridge’s ensuing drive, Sautter rushed in from 12 yards out. The Titans couldn’t convert two-point conversions after those scores, though, so they took a 12-0 lead.

That was about the worst part of the first half for the hosts. Isom then scored from eight yards out, and though Century (3-3) responded with a passing touchdown and Isom threw a pick a drive later, the Titans never really faced any danger.

Sautter scored from 50 yards out — where he fumbled near the goal line and recovered — Thunder Ridge senior Karson Westergard picked off Romreill, and the Titans turned that turnover into a touchdown. This time, sophomore Porter Brizzee did the honors, from 20 yards out.

Minutes later, after Romreill tossed his third interception of the half, Sautter jogged in from four yards away.

Thunder Ridge took a 41-7 lead into the intermission. The score never came much closer, aside from Century’s garbage-time rally — though Hobson said he really enjoyed that.

“On the whole, I’m happy my kids battled back,” Hobson said. “At halftime, we said, ‘We can all accept that things didn’t go our way, so let’s just accept and know that. Now, what do we do?’ I’m happy with them.”

In reality, for both teams, the importance of this game came in the experience players got from it. This was a non-conference matchup, so it was never going to affect either club’s playoff positioning.

For now, Century’s is nonexistent. The Diamondbacks have yet to play a conference game. Their first will come next Friday, in a home tilt with Preston.

Thunder Ridge’s conference picture could look better. The Titans, a 1-2 in conference play, check in at third in the 5A District 5-6 conference. They have one conference tilt left, a home matchup with 0-4 Madison next Friday.

The Titans will hope they get off to another sizzling start in that one.

If not, well, they have Isom. In some games this year, that’s been enough.

“I think he did a great job,” Thunder Ridge coach Jeff Marshall said. “We run wildcat quite a bit throughout the year anyway, so he’s already had 50 snaps at quarterback before this. It was a pretty easy decision to go in that direction.”