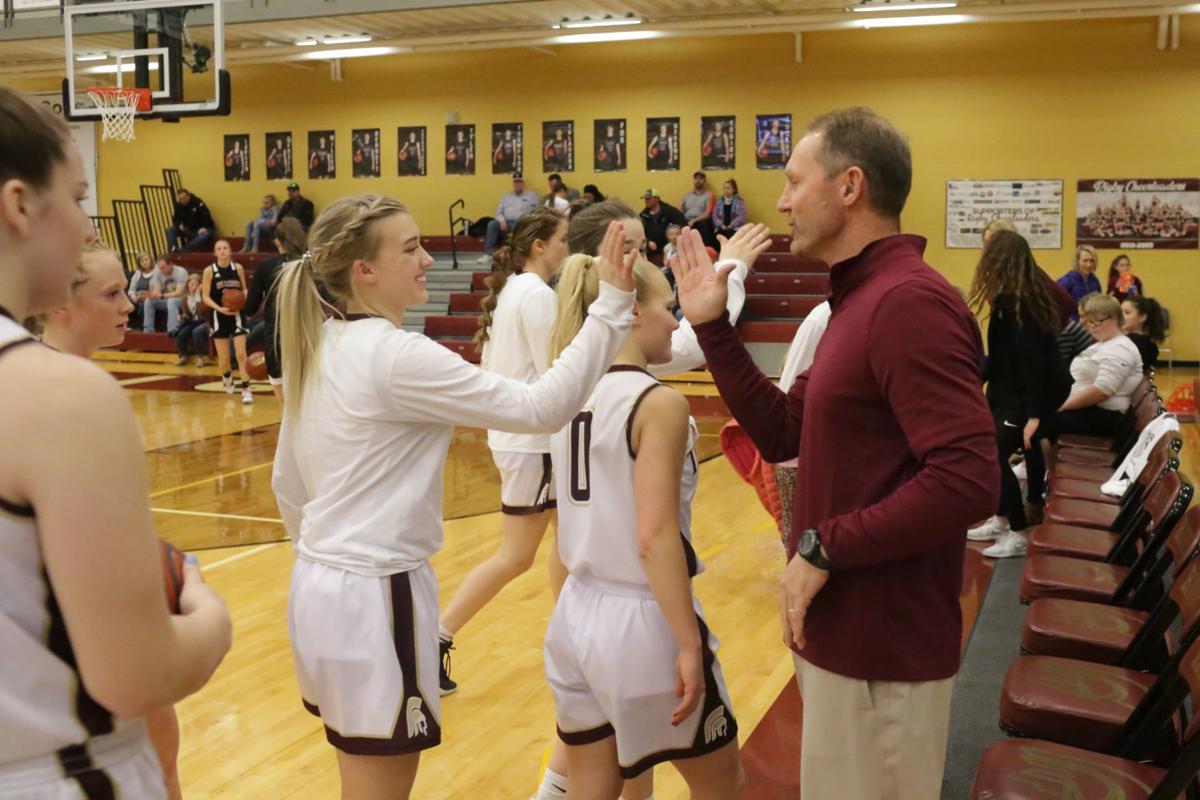 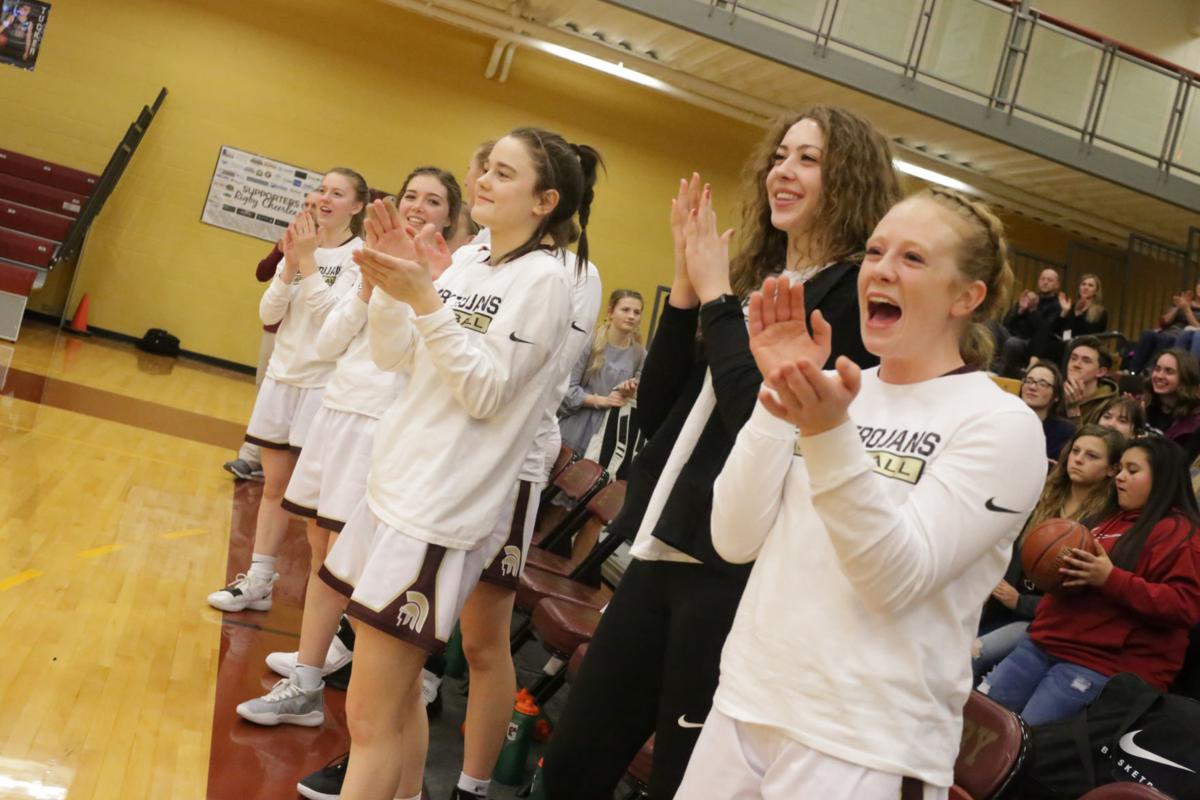 Rigby players cheer on seniors before Thursday's game versus Hillcrest. 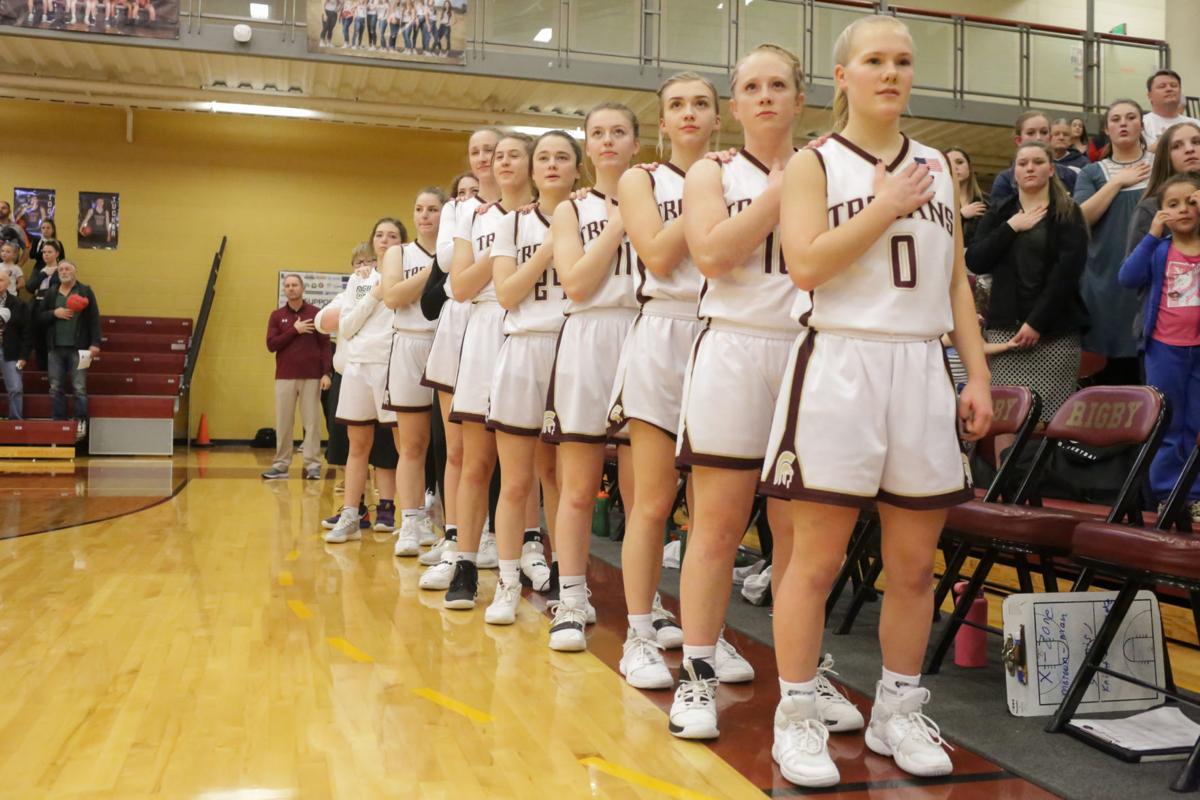 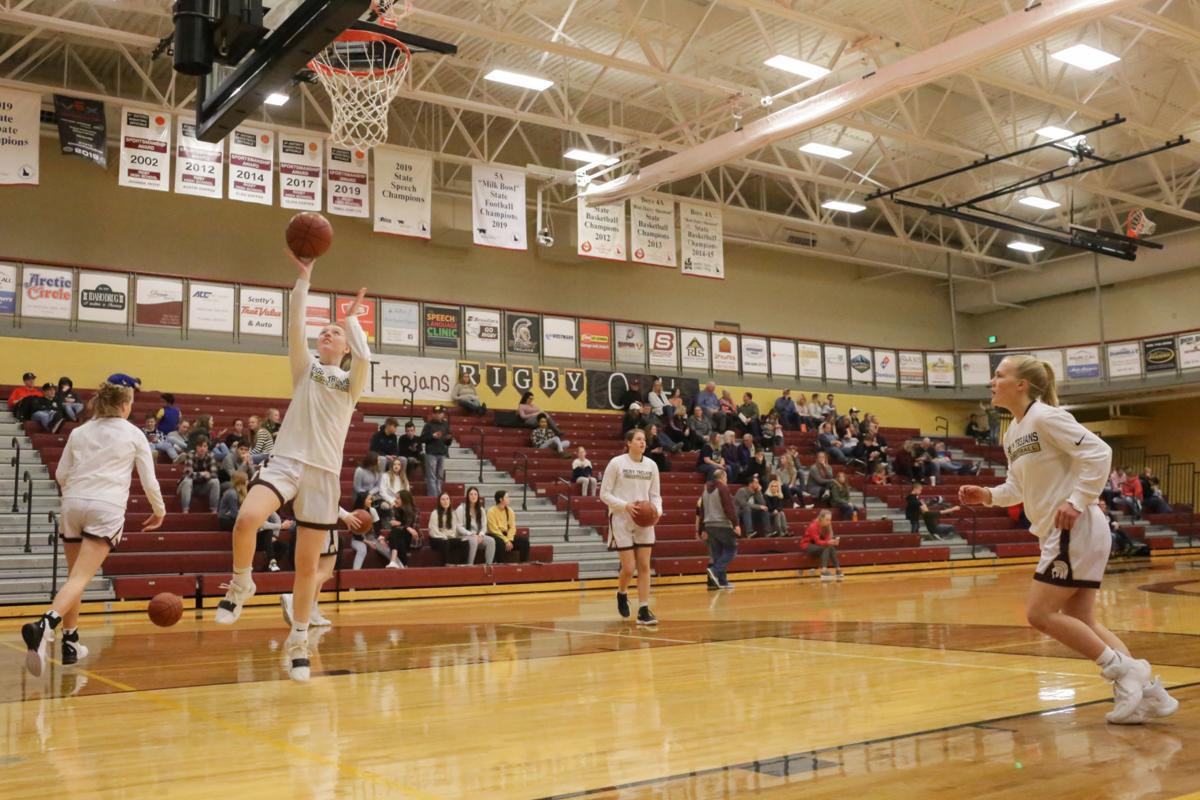 Rigby players warm up before Friday's game versus Hillcrest. 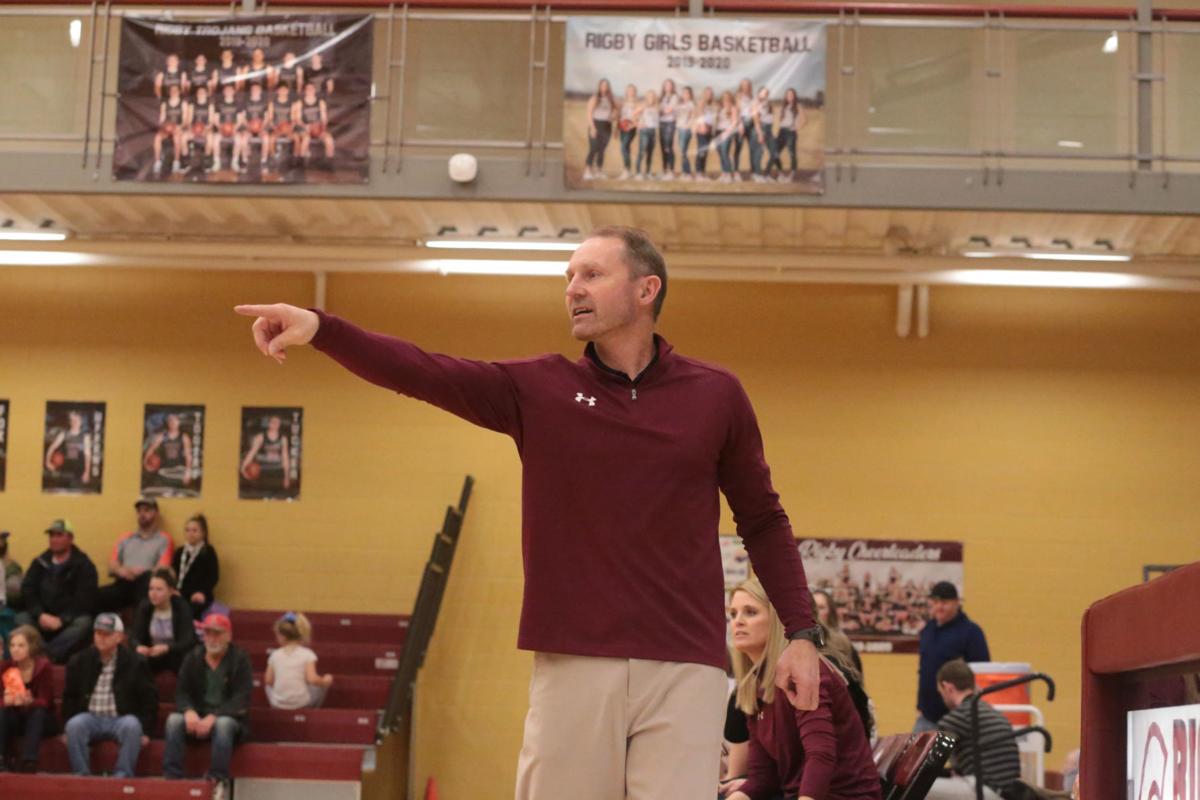 Rigby players cheer on seniors before Thursday's game versus Hillcrest.

Rigby players warm up before Friday's game versus Hillcrest.

RIGBY--A year ago, the Rigby High School girls basketball team went the distance versus No. 1 seeded Highland, prompting a second 5A District 5-6 championship game and ultimately winning 52-46 in overtime for its first district title since 2012.

This week, the top three seeds for the 5A District 5-6 tournament look considerably different than last year. Highland is No. 3, Thunder Ridge is No. 2 after being No. 3 last year and the Trojans are the No. 1 seed upon having gone undefeated in regular-season conference play for the first time since 2011, when they entered the 4A state tournament undefeated.

Having been the No. 2 seeded team that took down a No. 1 seed, the Trojans know what is possible during a district tournament.

Third-year Rigby head coach Troy Shippen said seeds don't mean anything in the 5A District 5-6 tournament other than determining who gets home court. Rigby's final regular season conference game on Jan. 28 was a reminder of that. Madison, seeded No. 4 for districts, pushed Rigby to overtime before the Trojans won 52-48. The Bobcats play Tuesday at Rigby to begin districts.

"I respect every team we play," Shippen said. "The higher seeds definitely have to be mentally strong. It's easier to be the underdog."

This No. 1 seeded Rigby team looks much different than last year's No. 2 seeded team. The Trojans had five seniors last year, all of whom were major contributors to Rigby's district championship and first 5A state tournament appearance. Save for seniors Murdoch and Brindy Shipper, this year's varsity roster is compromised entirely of juniors.

Brooke Donnelly, one of those juniors, was motivated to make varsity this season. She put in the work in the offseason to make that happen, playing over the summer with the Boise-based Idaho Flash team with Bonneville's Sydnee Hunt, Thunder Ridge's Lauren Davenport, Skyline's Mattie Olson and Rigby teammate Tylie Jones. She said the Trojans know they have a target on their backs as defending district champions, but she was not too nervous entering this season due to how well the juniors play together. Since eighth grade, they have had a goal of being state champions.

"Teamwork makes the dream work," Donnelly said. "I trust every single one of my teammates."

The Trojans are not the only youth laden team in 5A District 5-6 this season. As competitive as the conference was this season, Shippen anticipates there will be more battles in years to come with so many players returning.

Shippen said he was unsure of what to expect this season with so many new varsity players, but the Trojans have all worked hard.

"They're coachable girls," Shippen said. "We've had our ups and downs, but they've had a great attitude."

The biggest strength in this group with numerous varsity newcomers has been defense, Shippen said. That defense, as well as heart, define this year's youth laden team, according to Murdoch.

"We all connect and see the floor," Murdoch said. "I feel like our defense has really been what has stood out for me. Not so much the hustle, but the heart. Every single game, I feel like we put our best foot forward."

While she agreed that Rigby has 'lock down' defense, Donnelly added that the Trojans have a plethora of shooters.

"I have to say we're the best shooting team in Idaho," Donnelly said. "We can beat anyone in a shooting contest."

The 'new season' as Shippen calls it, begins with Tuesday's opening round district game. He compared districts to a chess match, not knowing what decisions other coaches will make. For Rigby, this year's unknown is the status of Jones, who is sidelined indefinitely since falling hard on her knee versus Madison on Jan. 28.

To repeat as district champions, Shippen said some luck will be required along with playing smart, limiting turnovers and making free throws.

"You have to have some things go your way," Shippen said. "It's a coaching challenge as well. Even though you've seen (these teams) a lot, people do new things. Some teams are gonna do what they've always done."

All too familiar with what it is like to be part of an upset win at districts, Murdoch said the Trojans enter this week wary of how teams have improved later in the season. Remaining level headed will be a priority.

"Every season I’ve experienced, teams go through ups and downs," Murdoch said. "The regular season is over. We know we can’t overlook any teams in our conference."

When: Tuesday through Feb. 11

Teams to state: 1.5. Second place to state play-in game versus District 3 No. 5 team.

Notes: Youth is the name of the game for 5A District 5-6 this year as all four teams have numerous underclassmen. Although defending district champion Rigby is 6-0 versus conference opponents, not much separates each seed as everyone finished two games apart in the final conference standings. The bottom three seeds have also played Rigby close. Thunder Ridge lost by 10 points or fewer in both meetings with the Trojans, Madison pushed Rigby to the brink before falling in overtime on January 28 and Highland, which has reached the state tournament every season since 2007-08, played conference opponents to much closer scores in January than in December.

When: Monday through Feb. 13

Notes: Upsets defined this tournament last year as No. 1 seeded Bonneville and No. 2 seeded Blackfoot both fell in their first games. Bonneville is again the No. 1 seed with an undefeated overall record and Blackfoot is again seeded No. 2. While Skyline ended the regular season tied for third with defending district champion Hillcrest at 5-5, Skyline claimed the No. 3 seed in a tiebreaker due to the Grizzlies defeating mutual opponent Madison twice while Hillcrest split with the Bobcats. Bonneville last won districts in 2018 at the 5A level, but has not won at the 4A level since 2010. Blackfoot’s last district title was in 2000, Skyline’s was 2004 (5A) and Madison’s was 2017 (5A).

When: Monday through Feb. 10

Notes: Two-time defending 3A state champion and No. 1 state media poll ranked Sugar-Salem enters districts having gone undefeated versus 3A opponents since the 2017 3A state championship game. Furthermore, the Diggers haven’t dropped a game to a conference opponent since Teton beat them in January 2017 and they have won 10 of the last 12 district titles. Teton, the 2016 district champion, has played Sugar-Salem close and led at halftime of a Jan. 29 game in Driggs before the Diggers scored 37 points in the second half to complete the comeback win. South Fremont, which last won districts in 2006, last defeated a conference opponent in January 2019.

When: Monday through Feb. 11

Notes: An always competitive conference with a history of producing state hardware, this year’s district titles is arguably the most up for grabs it has been in a while. Ririe has won five of the last seven district titles and last year became the first Nuclear Conference team to win three consecutive district titles since Butte County won three in a row from 2005 to 2007. The Bulldogs, who won their last two titles off last second shots, took the No. 1 seed this year upon winning a tiebreaker coin toss over Firth. What makes this year’s tournament intriguing is that the top three seeds have all traded wins and No. 4 North Fremont split with No. 3 West Jefferson. The last district champions not named Ririe were West Jefferson (2016) and Firth (2014). North Fremont won its only district title in 2009 and Salmon last won a district title in 2012 at the 3A level.

When: Began Jan. 29 and continues through Feb.7

When: Began Saturday and continues through Feb. 15

Notes: The top three seeds in this tournament have been intensely competitive all season, all taking turns being ranked in the state media poll and trading wins. Mackay, which took the No. 1 seed upon Rockland forfeiting its regular season finale versus the Miners, is the lone team in the conference to have beaten defending district champion Rockland thus far this season. Sho-Ban, which got a school record 47 points from Harley Jackson on Jan. 29, has played both Mackay and Rockland close. Butte County was the last District 6 team to win this tournament, winning in 2017 and 2018 en route to claiming state titles those years. Before that, the last District 6 team to win this tournament was Mackay in 2015.