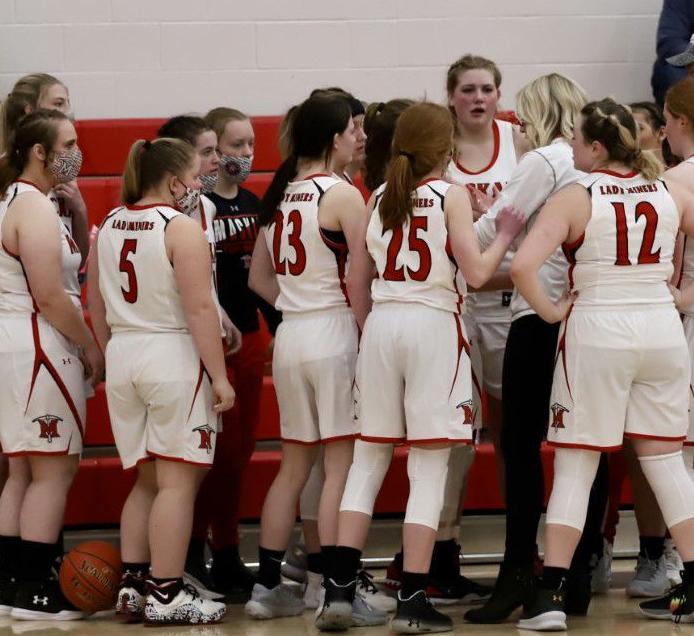 Mackay head coach Kashia Hale talks to her team during a game this season. 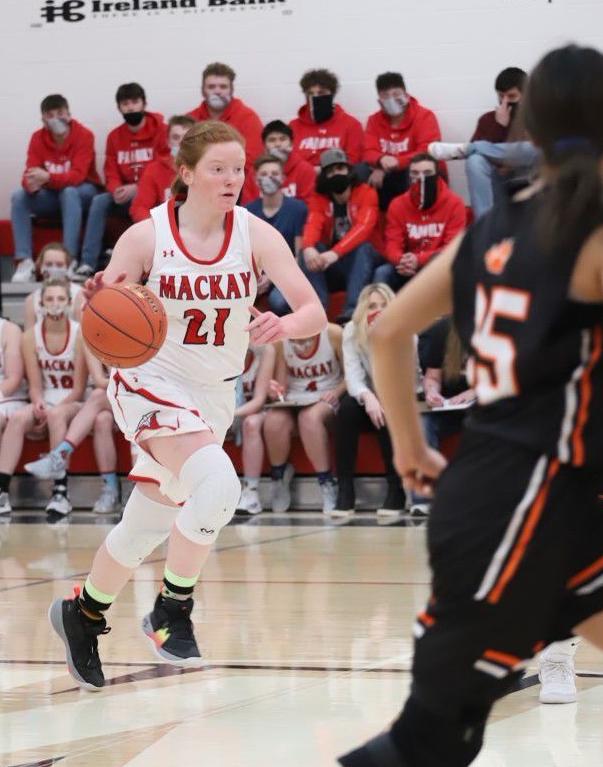 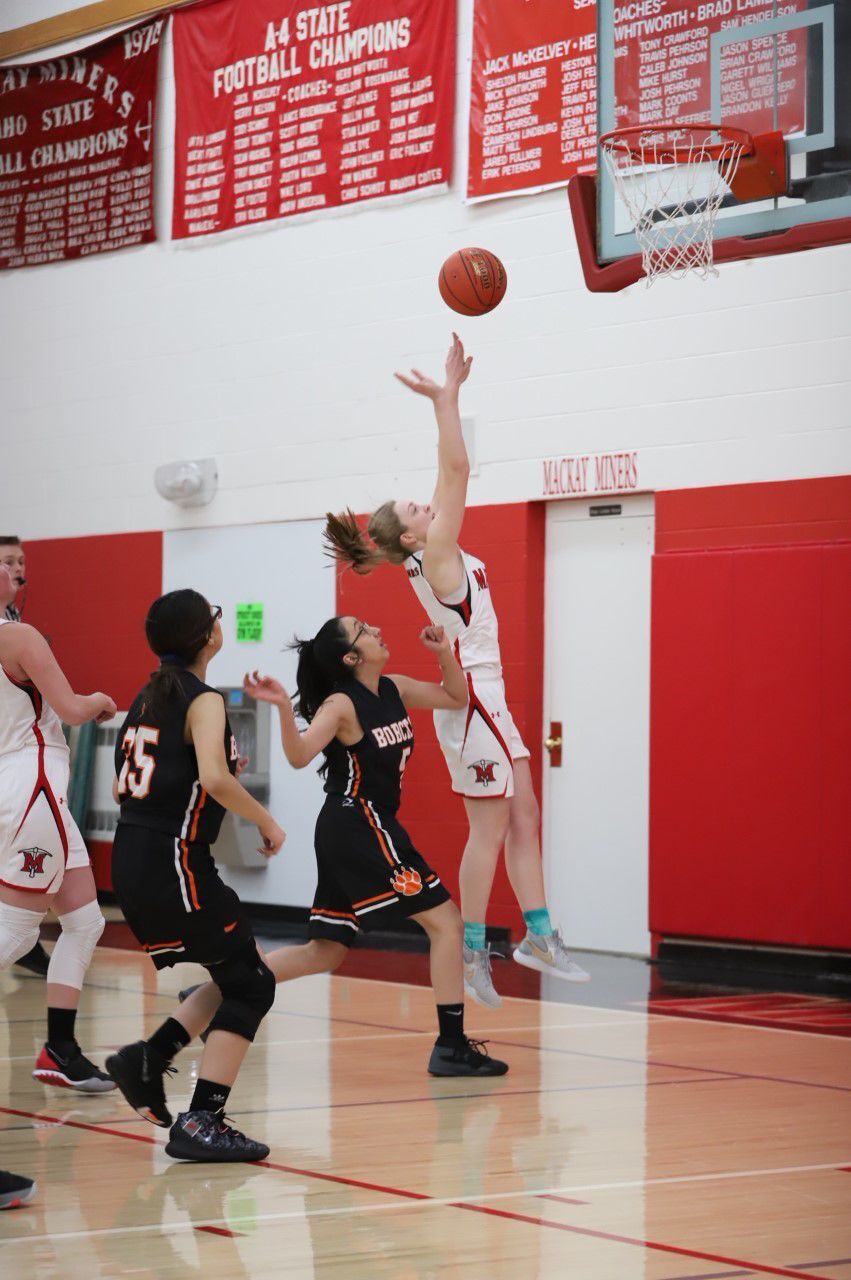 Alana Christensen goes up for a layup in recent Mackay girls basketball action. 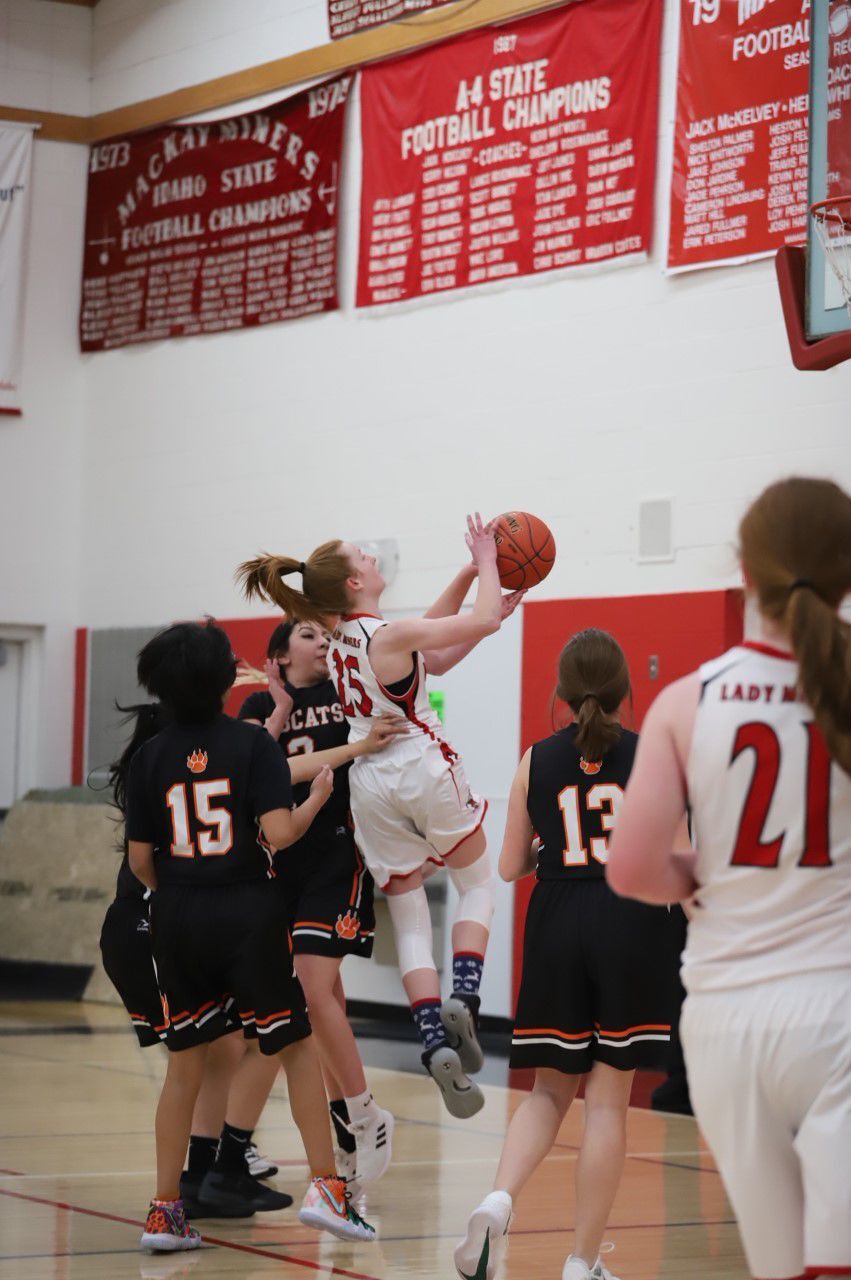 {span}Kaydence Seefried raises up for a layup for the Mackay High School girls basketball team. {/span} 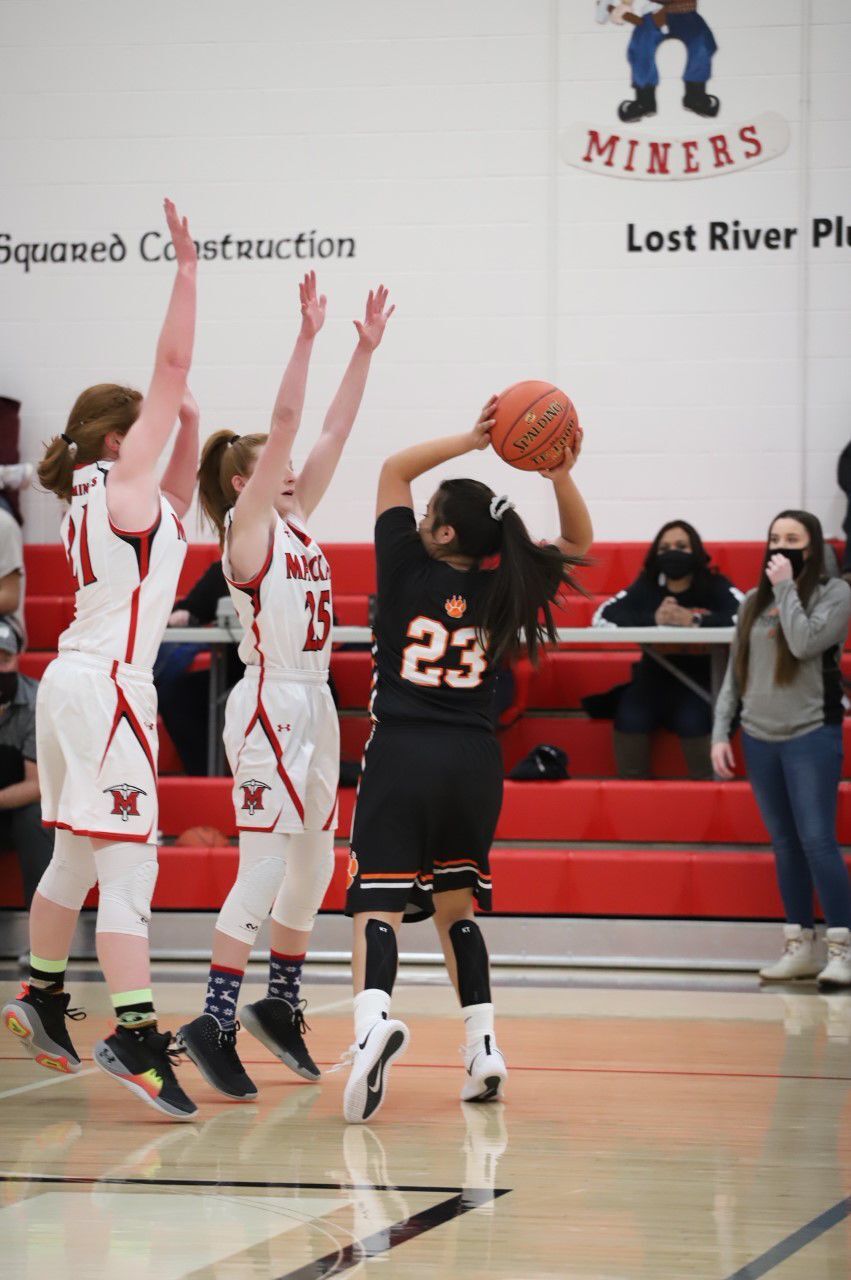 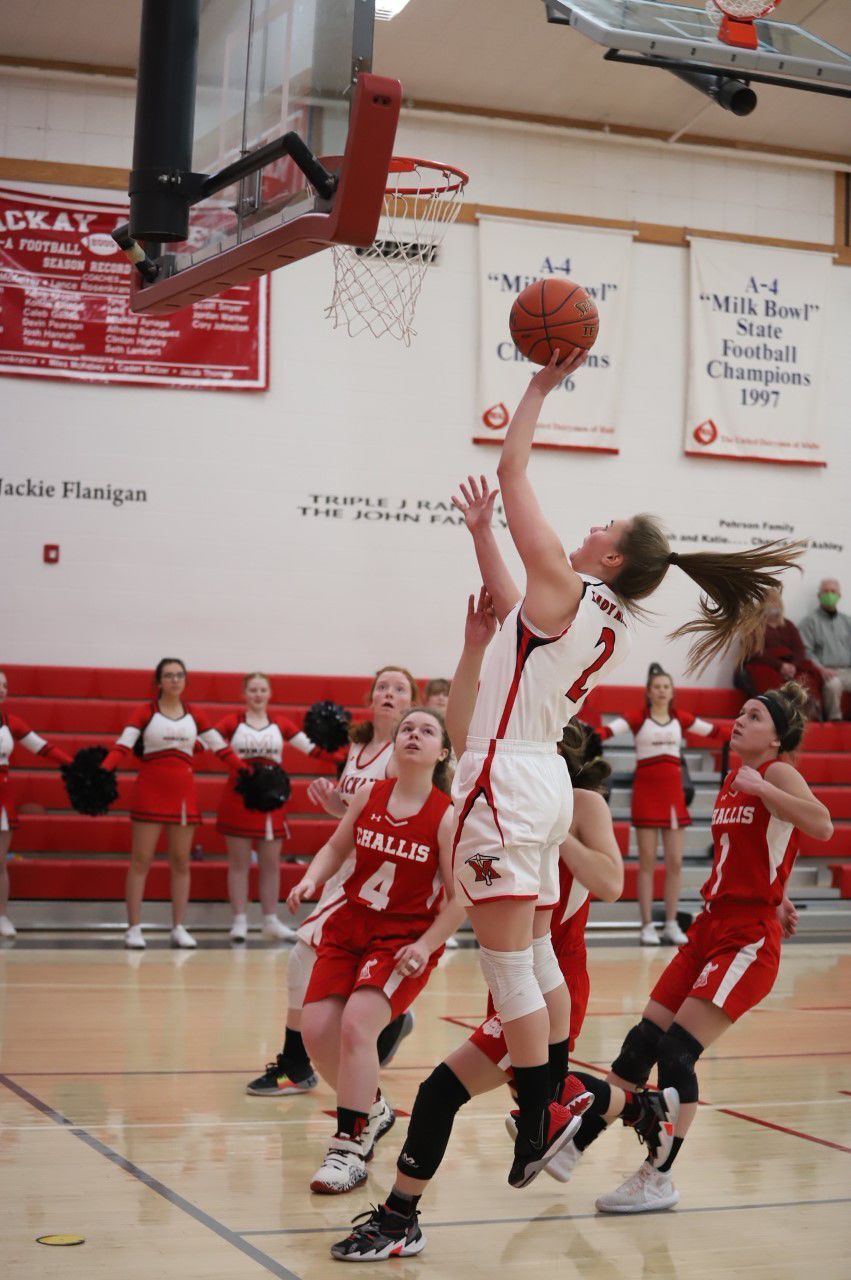 Mackay High School’s Riley Moore goes up for a lay-in.

Mackay head coach Kashia Hale talks to her team during a game this season.

Alana Christensen goes up for a layup in recent Mackay girls basketball action.

{span}Kaydence Seefried raises up for a layup for the Mackay High School girls basketball team. {/span}

Mackay High School’s Riley Moore goes up for a lay-in.

Kashia Hale’s team was on the verge of taking another uncomfortably big lead. She felt confused, frustrated, awkward this Friday night. She had spent the last four years fortifying her Mackay girls basketball program, but for the Miners to open another 50-point lead, this time over Watersprings?

Hale didn’t know what to do.

She turned to her assistants on the bench.

She still doesn’t know the answer.

Last week, Mackay logged the following wins: On Tuesday, 74-8 over Clark County. On Thursday, 82-30 over Challis. On Friday, 80-15 over Watersprings.

“It’s unfortunate that the score gets that high. We’re not having a goal to run the score up,” she said. So the challenge involves the comment she made to her assistant coaches.

How do you rein in the competitive nature of basketball players? How do you slow down your team’s scoring without risking the entire nature of the game? Sports aren’t designed to come so easily to some teams and so difficult to others, much less in one game, so for Hale and the Miners, the week amounted to one giant puzzle.

To try and solve it, Hale stresses team basketball, particularly when the scoreboard turns unsightly. She wants her players to complete at least five passes before they attempt a shot, which breeds smooth offense and kills the clock.

Even that doesn’t always slow things down, though. Against Challis, Trinity Seefried totaled 24 points and 14 assists. She played within herself, within the system. “She was looking and finding,” Hale said. And the Miners still eviscerated the Vikings.

To combat that problem, Hale has also played several JV players in those three games. Not just some — all of them. Mackay played its entire roster in all three games.

Still, Hale has to make some calculations. When should I put in my younger players? When is it safe?

The answer is 20 points. That way, she’s comfortable. Kind of.

“Comfortable enough,” Hale said. “It’s hard. You have your gameplan and you don’t know what’s going to happen until midway through the game. It’s just something you don’t expect, so when it does happen, it’s nice.

Yet regardless of personnel, the awkwardness persists. At one game this week, after Mackay had built a gigantic lead, Hale watched one of her freshmen find a wide-open lane for an easy layup. In the moment, coach and player caught eyes. She wore a confused expression.

Can I take this?

She did, and she made it, but the intrigue is in the mere idea. Who turns down an easy basket in a live game?

“It’s just awkward all the way around,” Hale said.

What gives Hale some perspective here is that four years ago, her team was the one giving up those kinds of looks.

Hale took over the girls basketball program for the 2016-17 season. That team had nine players, all freshmen and sophomores. There were some tough losses, including 64-30 to Challis, 63-25 to Butte County, another 70-29 defeat to the juggernaut Pirates.

Mackay actually finished with a winning season, but with those losses, Hale learned the hardest of lessons.

Things are different now, of course. The Miners haven’t lost in more than a month. They nurse a loose grip on the No. 2 spot in their 1AD2 conference, which will become vital when the postseason kicks off.

That’s part of the problem, though.

On Thursday, Mackay has a home date with Rockland, which is 9-0 in conference play. “That’s going to be a huge game for us, and we have to practice the speed we want to play at for the end of the season,” Hale said. After that, the postseason. If things work out, state.

Mackay is having a hard time getting reps for more challenging games, in other words, which is troubling news because they’re approaching soon. It’s January. Counting the Rockland matchup, the Miners have just three regular-season contests left.

“We have high hopes to return to the state tournament,” Hale said. “If I have to tell my kids, ‘No, you can only go so hard,’ it’s a bummer for my kids not to be able to play a full game at their full speed.”

In a broader sense, things could be worse for Mackay. The margins are awkward, but the Miners are winning. That beats the alternative, especially as the postseason looms.

Fortunately for them, their head coach has seen this from both sides.

“The kids laugh at me, because I’m like, ‘Slow it down,’ or ‘That’s not eight passes!” Hale said. “They’re just staring at me. They’re probably thinking, ‘What is Coach doing?’ It’s a bummer. I feel for those teams. I’ve been in their shoes. It’s not easy to be in the other shoes. We do understand, and I feel for those teams. I give them kudos as well, because it’s tough.”