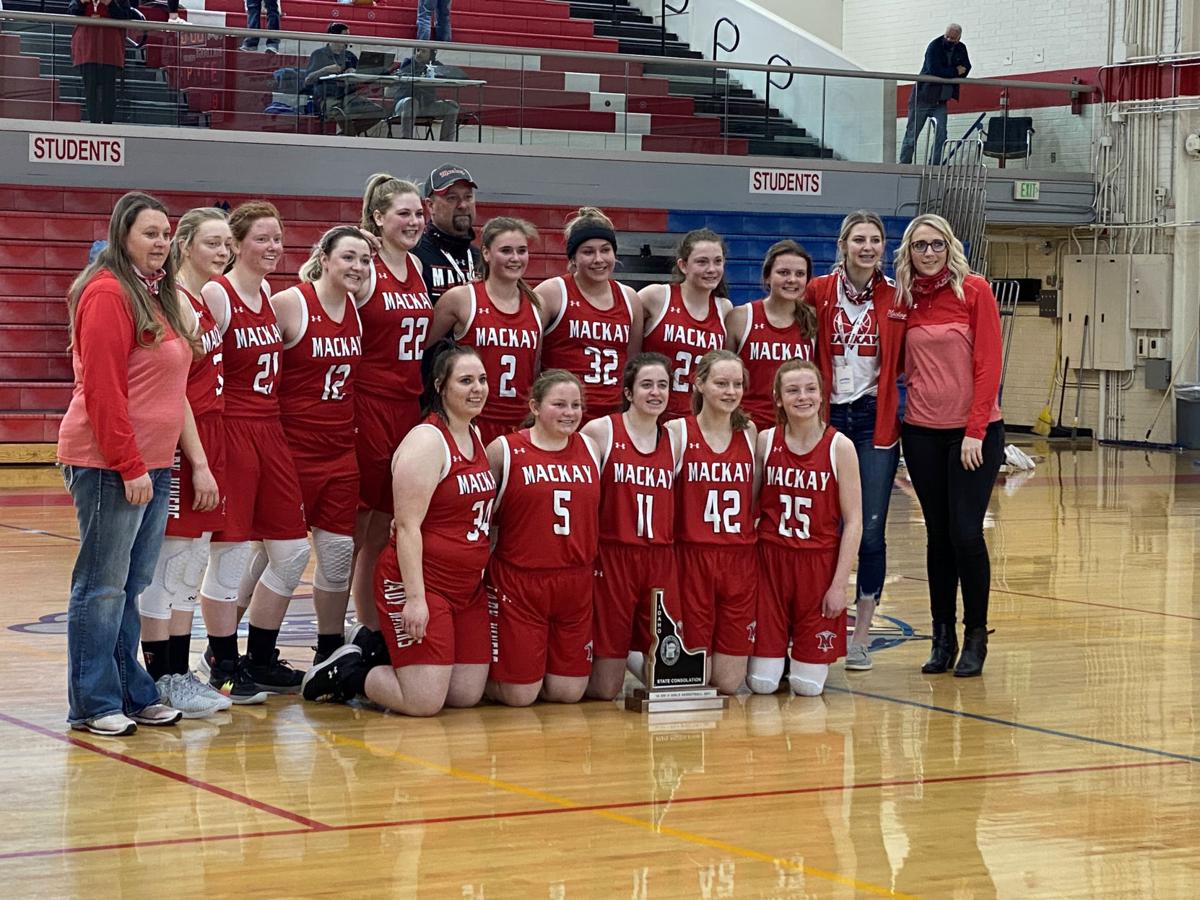 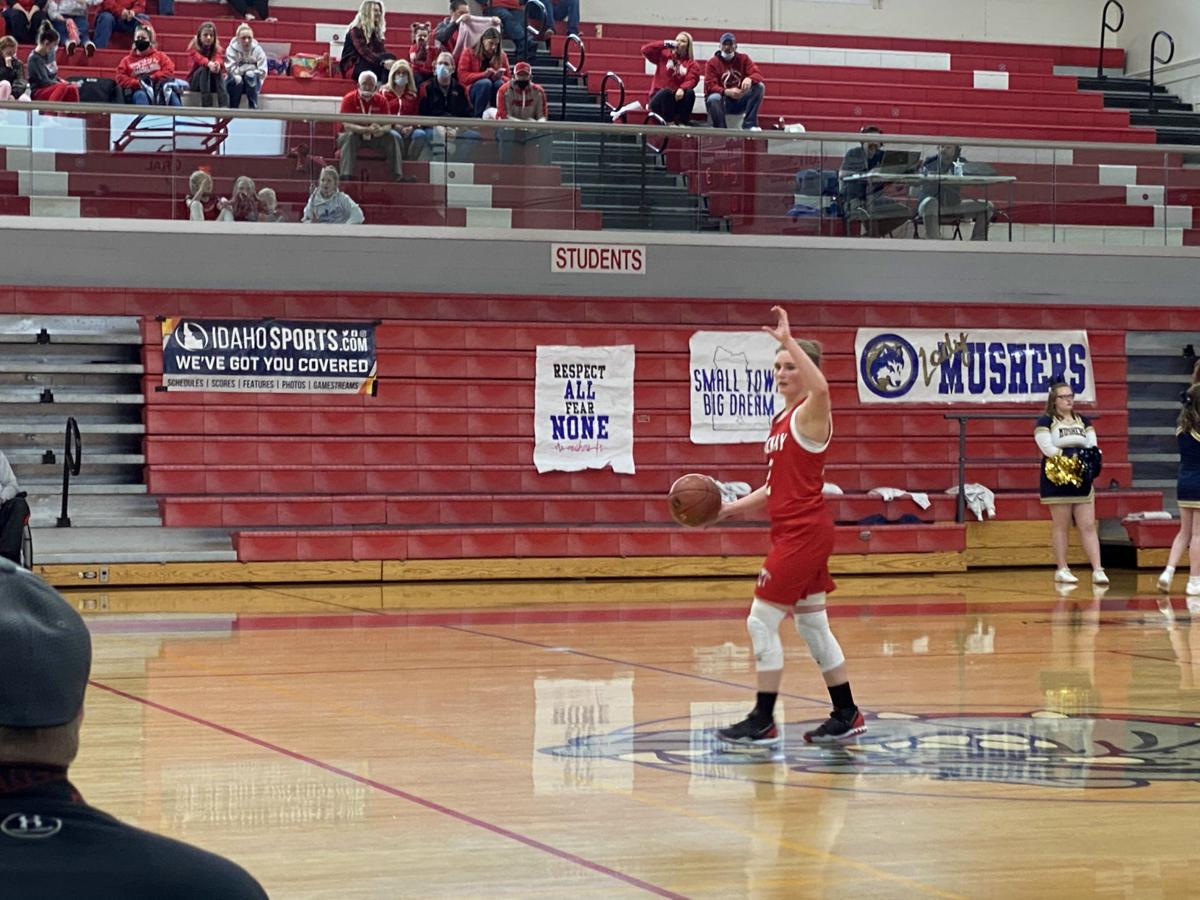 NAMPA — The black-and-white plaque rested on the first row of the bleachers in a Nampa High gym that had mostly cleared out. Cut in the shape of Idaho, it stood out against the red stands, waiting for someone to pick it up.

“We’re definitely going to get it engraved,” Mackay head coach Kashia Hale said, running her fingers along the sleek, silver rectangle along the front of the plaque.

The Miners, who secured the 1AD2 consolation plaque with a 56-37 win over Camas County Friday morning, had left minutes earlier, leaving their head coach to take care of the prize. It wasn’t the one they wanted, not nearly, but considering the season they had just completed, they could have left in worse ways.

“To be here in this moment, getting this game, and the girls finished after a tough, devastating loss,” Hale said, “this is all you can ask for.”

Throughout the regular season, Mackay turned into one of the best teams in the 1AD2 classification, but the Miners didn’t do so easily. They had COVID-19 issues in their program, which forced them to play three games with a roster of freshmen, a sophomore and junior.

“That built some kids’ confidence, and it helped them get through it,” Hale said. “It also helped my kids that sat, because they had to work harder throughout the season. They had people pushing them. So covid actually benefited my program by allowing other kids to have the opportunity to be successful.”

Then, Hale laughed as she said this: “It helped my team. Thank you, covid.”

Mackay opened on Wednesday with a 50-46 overtime loss to Carey, a particularly gutting loss considering how hot the Miners entered the tournament. They had won 15 straight games, including over the same Carey team and over Rockland in the 1AD2 District 6 tournament championship game.

Instead, their state championship hopes vanished. They were headed to the wrong side of the bracket.

“They were devastated,” Hale said. “In my program, we teach about adversity and what you face. And these kids, they’re going to learn a tougher lesson for life down the road with losing that first game. Hopefully, it’ll give them a little more edge next year, and want to be better this summer during summer ball, and work harder hopefully.”

Maybe those effects have already taken hold. Mackay then topped Richfield 51-36 on Thursday, earning a spot in Friday’s consolation game against Camas County.

It took the Miners some time to get rolling, but when they did, the Mushers could do little to stop them.

Mackay led just 23-18 at halftime. The Miners didn’t come trotting out of the locker room until 47 seconds remained on the halftime clock. They didn’t get a chance to warm up for the second half.

They didn’t need to.

Senior Riley Moore totaled 20 points, including 11 straight in the fourth, which turned Mackay’s lead from eight to 19. From there, the Miners coasted, getting 16 points from Trinity Seefried and 12 from Megan Moore.

“Riley Moore — I’ve said it all year — is one of the best point guards in eastern Idaho,” Hale said. “She proved herself all tournament. I think she had 26 the first night, 26 the second night and 20 tonight. She’s a great athlete. Hardest working kid I’ve ever coached. You could see that. She put it all on the line today, and she wanted to bring home something special for her last year.”

Still, it wasn’t just Moore. The Miners improved as they played. They tallied 13 points in the third quarter and 20 in the fourth. They lost just seven turnovers, too, which highlights the composure and ball security Hale stresses so diligently with her team.

Now, the Miners are headed home with state hardware for the first time since Hale took over as head coach in 2016.

It isn’t the plaque they had designs on securing, but it is a plaque. It’ll fit in nicely with the trophy case up in the small town of Mackay, population 467.

“This moment is so surreal right here,” Hale said. “You know what, we got here. We got to enjoy this tournament. We got to be one of the last eight teams standing, and now we’re one of the only four teams left today that’ll finish on a win. And that’s a great feeling at the of the day.

“I can’t even explain it. It’s just great to end on that win.”