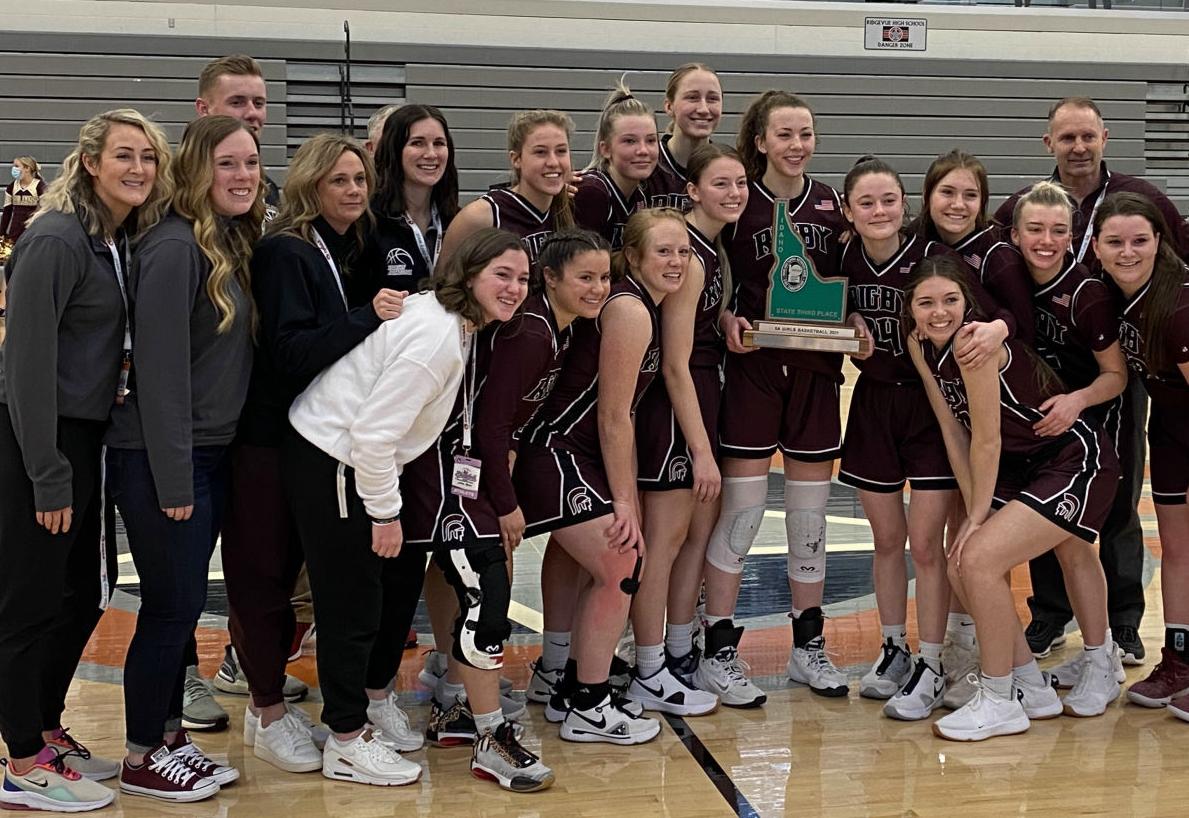 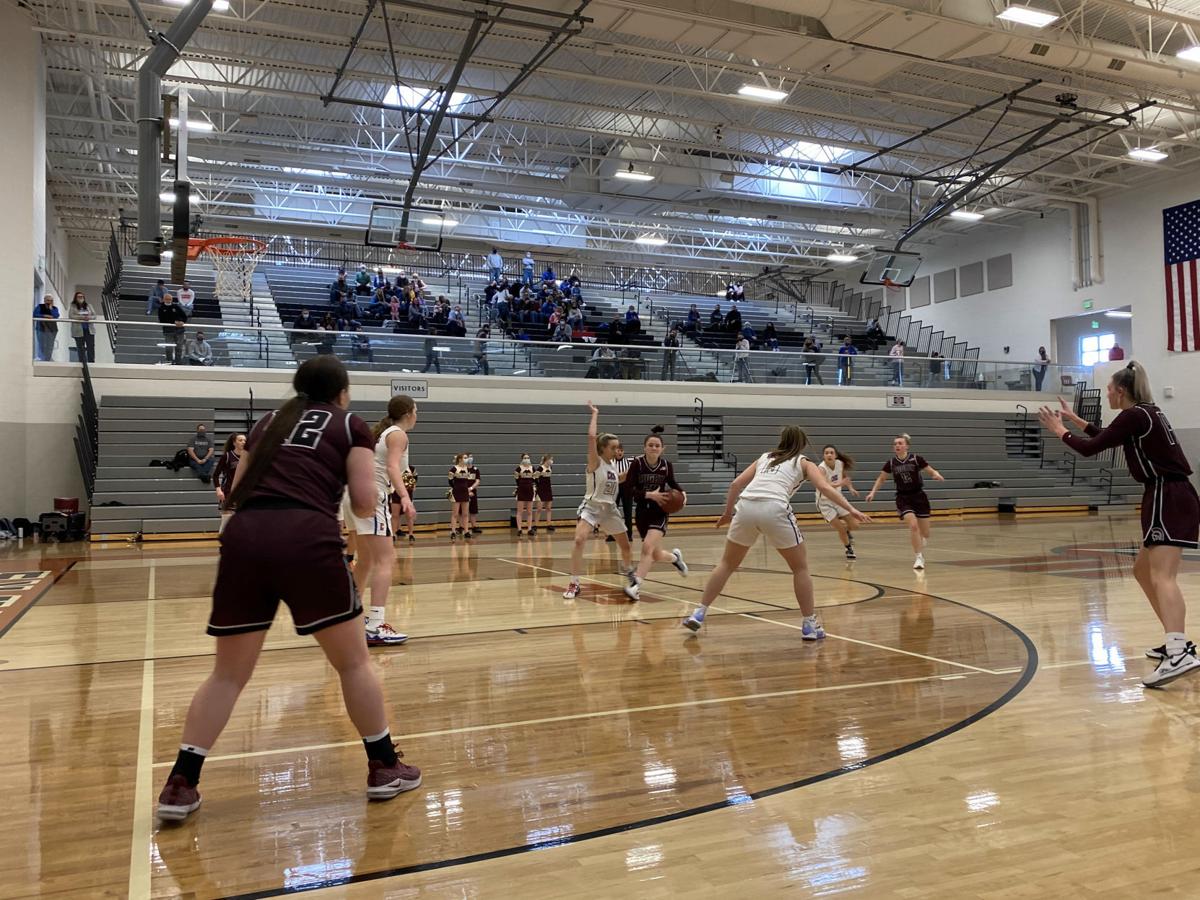 Rigby guard Brooke Donnelly gets into the lane Saturday afternoon against Coeur d'Alene.

Rigby guard Brooke Donnelly gets into the lane Saturday afternoon against Coeur d'Alene.

NAMPA — These circumstances always figured to challenge Rigby, the team that had just fallen in a way it never had.

On Friday, the Trojans dropped their 5A semifinal matchup to Mountain View, a game in which Rigby trailed by nearly 30 at one point. The Trojans were down by more than a dozen before they registered their first field goal. Rigby had lost before. Just never like that.

Then, things started to change. In the second half, even after losing starting guard Naomi Nunez to a knee injury, the Trojans rattled off 15 straight points, drawing as close as the final margin of nine. The comeback came far too late, but to hear coaches and players tell it, it represented something bigger.

On Saturday afternoon, when Rigby held off Coeur d’Alene in the 5A third-place game, 47-41, it became clear how earnestly they meant it. Some 16 hours after falling on the right side of the bracket, the Trojans ended the season with a victory over an opponent that had lost just twice all season.

“We are so good at bouncing back,” said senior guard Brooke Donnelly, who scored eight points in her team’s win. “Our spirits were high yesterday. After we lost, we were like, ‘OK, we’re just going to go and work hard, and we’re going to get that third-place trophy.’”

Doing so required Rigby to edge Coeur d’Alene in a low-scoring affair. Senior Tylie Jones posted a team-best 16 points. Brooklyn Youngstrom added 14 off the bench, sticking back misses around the basket.

Eventually, though, the game looked more like a free-throw shooting contest.

Rigby took a 29-26 lead into the third quarter. The Trojans recorded just two field goals in the period. Instead, they were forced to win things at the stripe. They connected on 13 of 22 attempts.

Rigby misfired on four straight free throws, giving Coeur d’Alene possession trailing 42-38 with 45 seconds to play. On its next two chances, though, star forward Madi Symons was whistled for a charge, and then missed a shot at the rim.

Rigby pushed its lead back to five with a free throw from Youngstrom, then Symons connected on a layup with 11 seconds left. But Jones hit two foul shots, good for the final six-point margin.

The Trojans had gone to state each of the last two years. This time, they were headed home with hardware.

“I’m proud of the girls. We’re excited,” said Rigby coach Troy Shippen, whose team held Coeur d’Alene to its second-lowest point total of the season. “Getting a third-place trophy at state is big for us. We wanted first place, but we’re happy with third.”

Rigby earned the win by slowly building a lead. The Vikings took a 13-11 lead early in the second frame, but the Trojans answered with nine straight, turning a two-point deficit into a seven-point lead. Coeur d’Alene trimmed it to 20-15 headed into halftime, but for the first time since Thursday’s opening round, Rigby had a lead.

It’s particularly impressive considering the opponent. Coeur d’Alene had lost just two games all season, both to Thunder Ridge, once in the regular season and then in Friday’s state semifinals. The Vikings represent something the Trojans hadn’t seen very often: One of the best teams in the state with one of the best players in the state on its roster.

Symons posted 16 points, including six in the fourth quarter, but all things considered, that’s a win for Rigby. She’s usually good for 20 or more. She hung 32 on Thunder Ridge in those teams’ first meeting this season.

In fact, meeting Coeur d’Alene was a sigh of relief of sorts for Rigby. After the Mountain View game, Shippen called Maverick forward Naya Ojukwu the best post player he had ever seen — ever.

Moving on, result notwithstanding, gave the Trojans the other part of the equation they needed to win on Saturday.

Rigby capitalized on that. Now, the Trojans can make the four-hour drive home in even better spirits.

It will be the last time they make that kind of trip together. The team featured nine seniors, the most Shippen has ever had at once. They said they will miss the friendship, the camaraderie, the seasons with COVID-19 concerns and those without.

“Just the friendship,” Donnelly said, explaining what she’ll miss about the team. “We’re all best friends.”

Ten feet away, amid a crowd of parents and players and siblings and coaches, Shippen handed off the third-place plaque to a player.

Then, tears welled in Shippen’s eyes.

“Just proud of the girls,” he said.