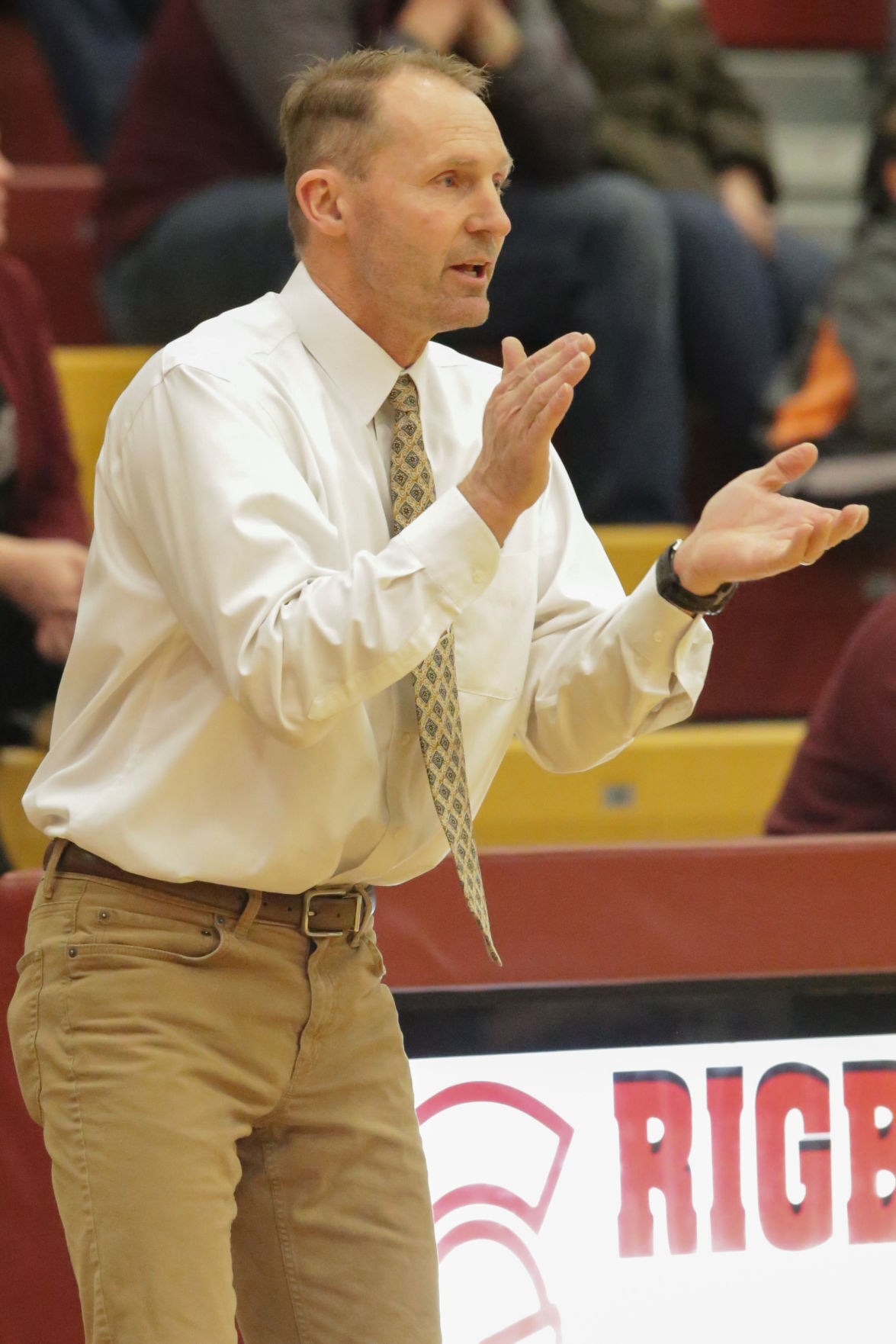 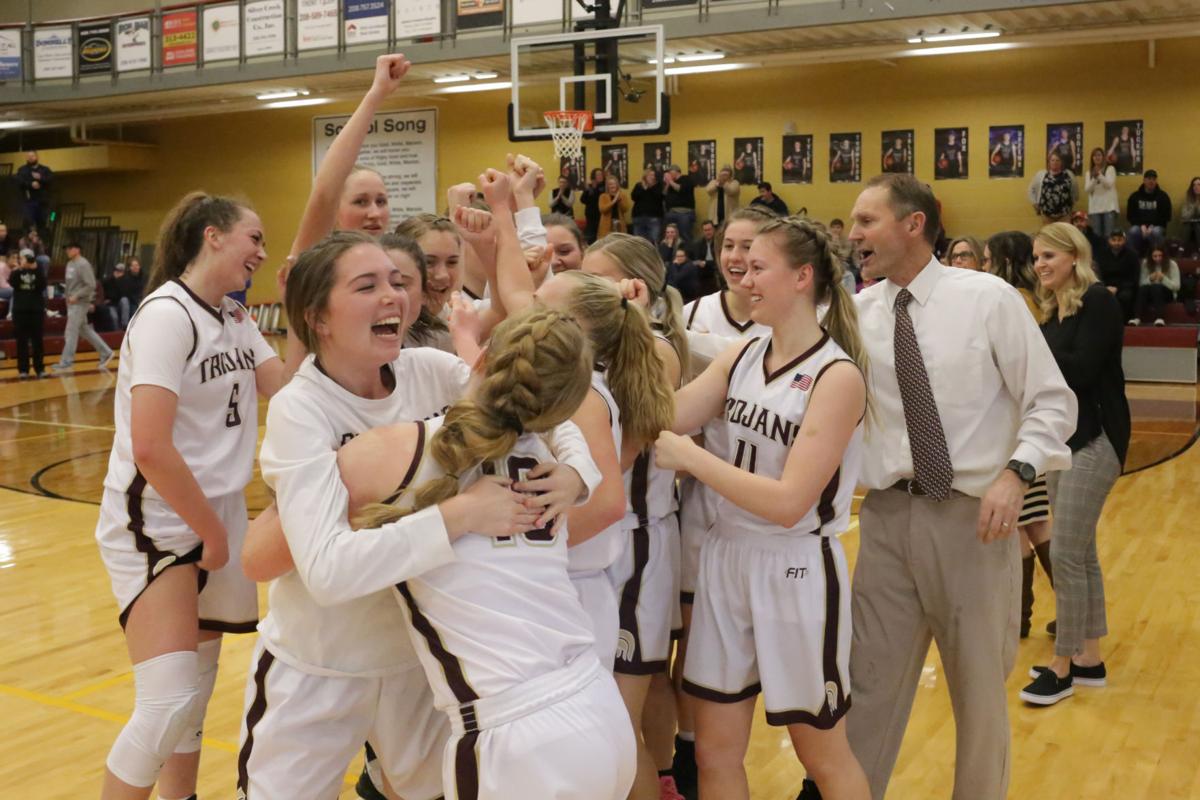 Rigby players react after defeating Thunder Ridge 68-56 for the 5A District 5-6 girls basketball title at Rigby on Feb. 11. 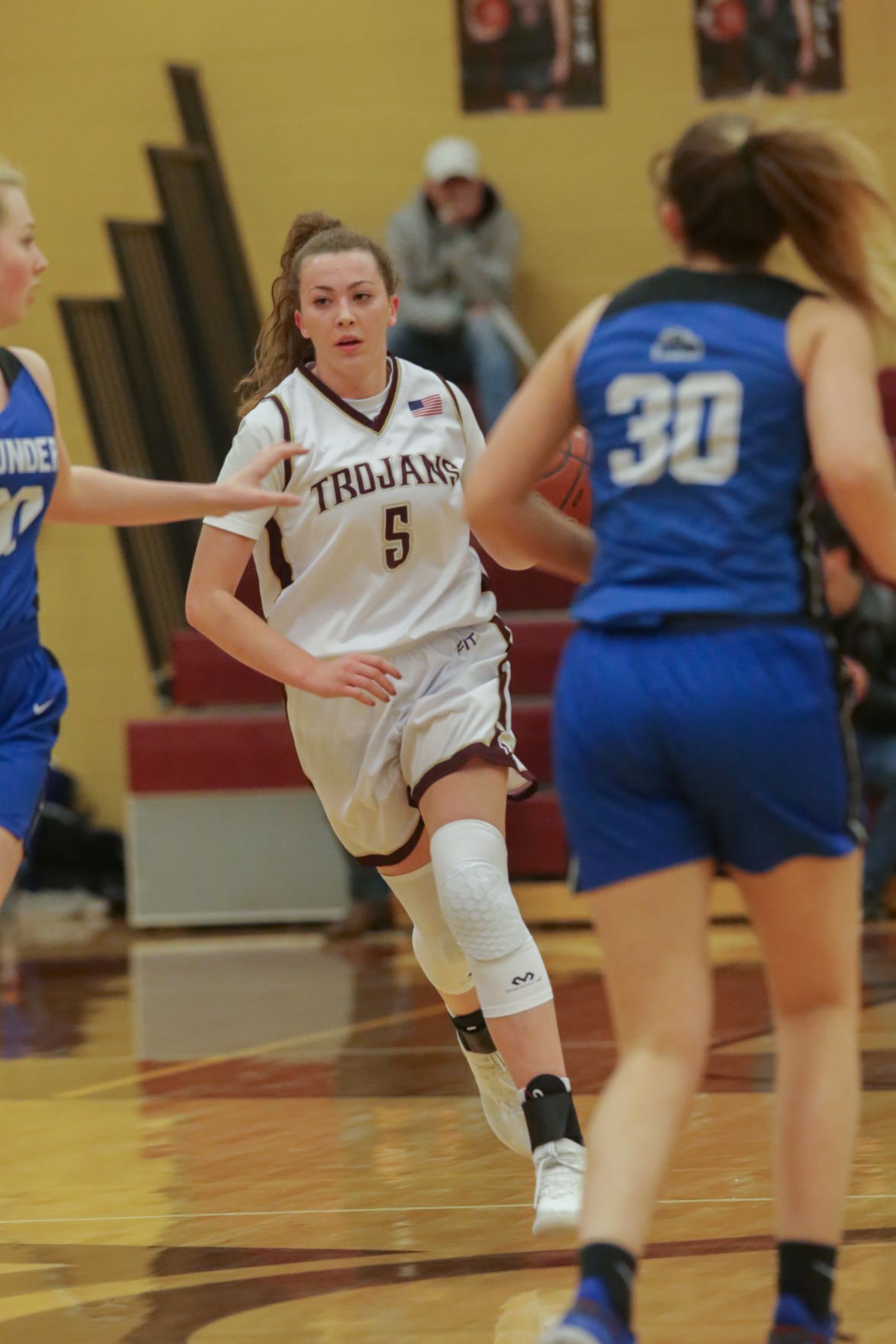 Rigby's Tylie Jones pushes the ball down the court as Rigby takes on Thunder Ridge on Feb. 6. 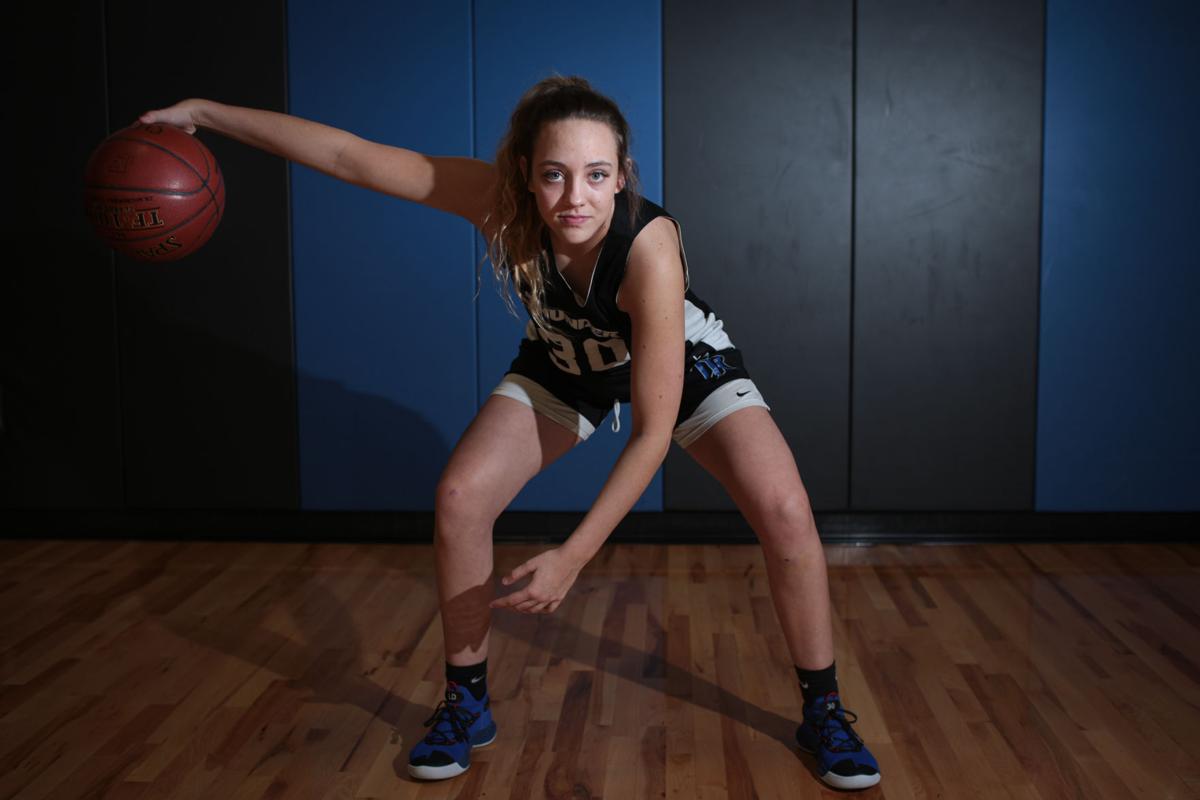 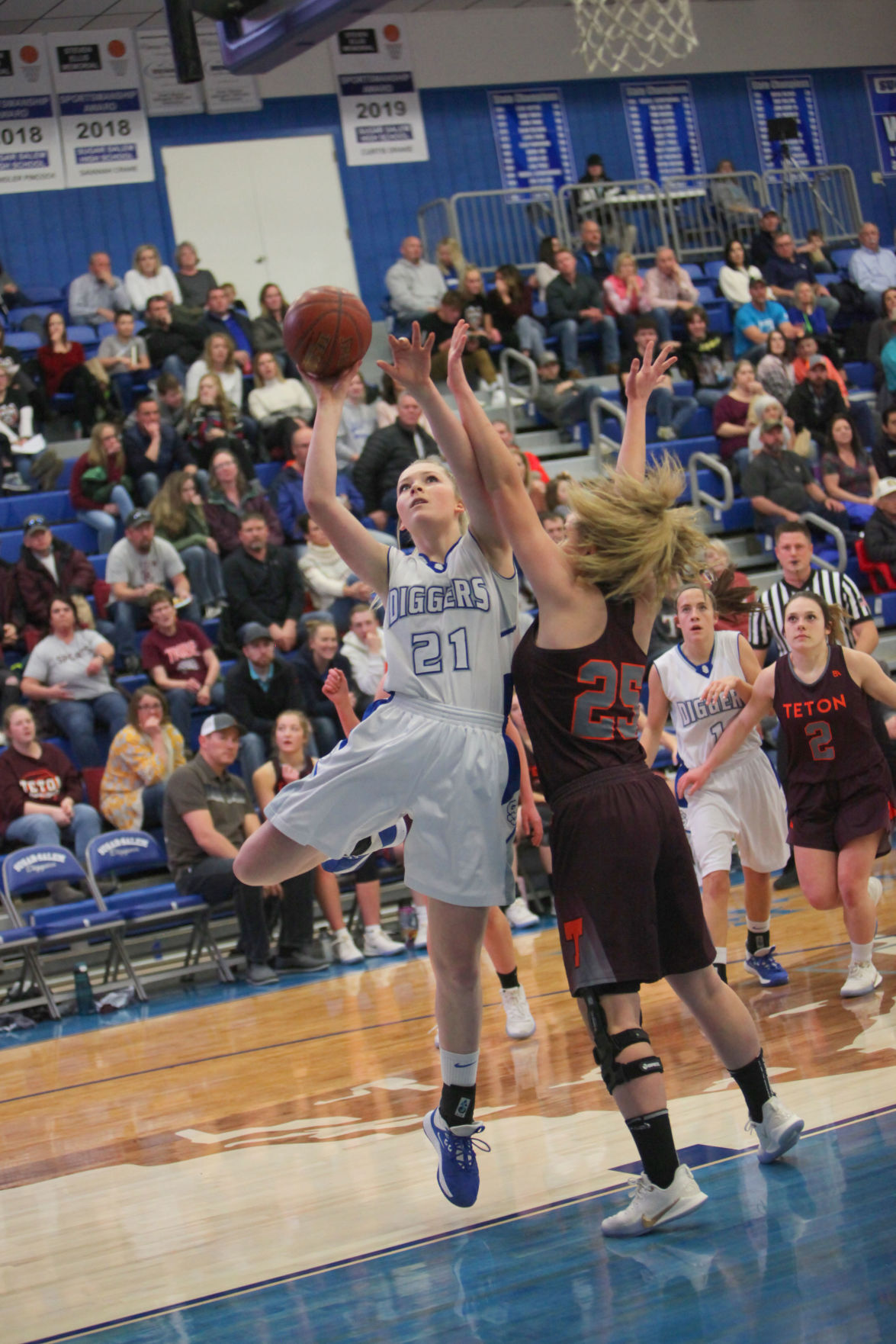 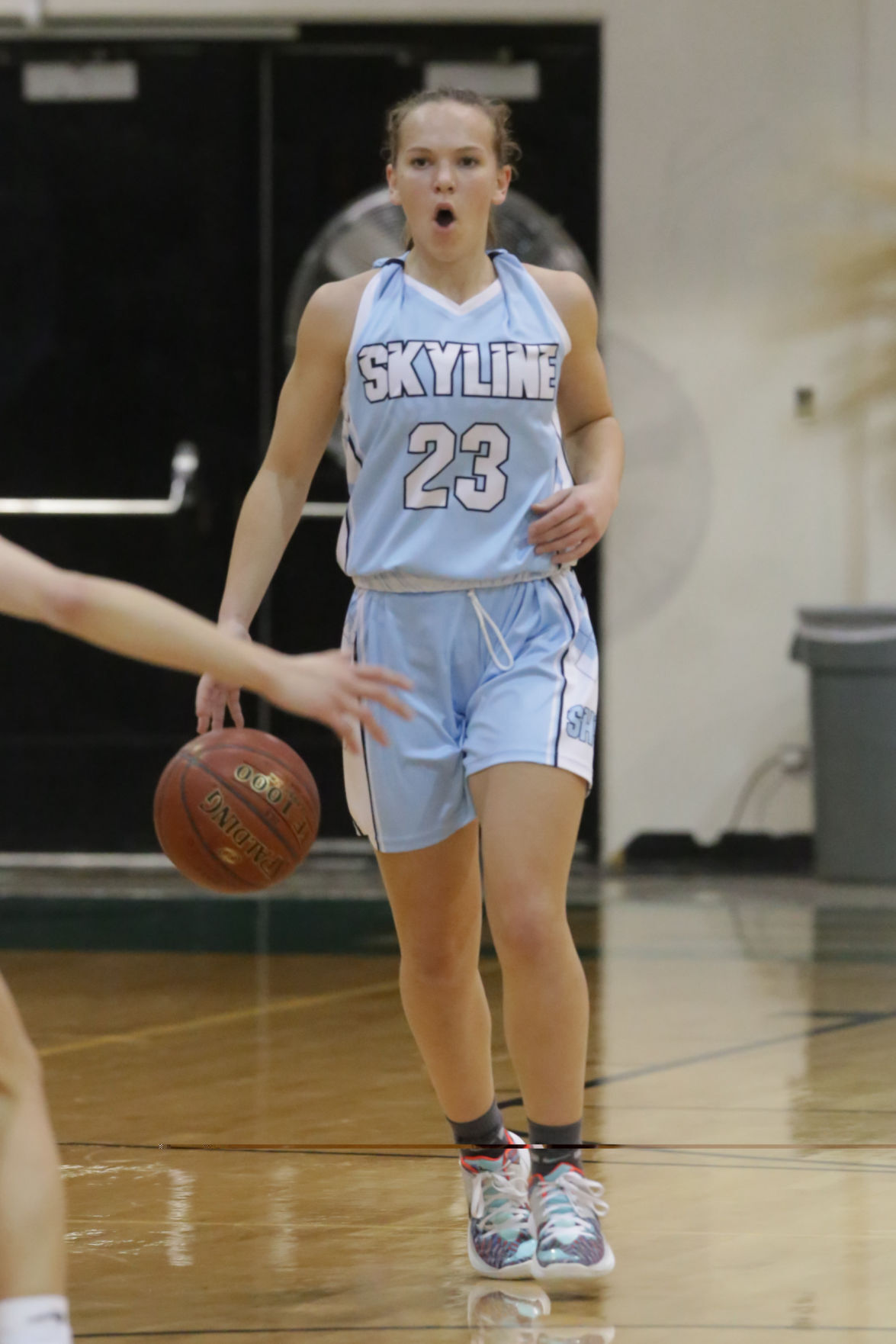 Skyline's Mattie Olson dribbles the ball down the court during a game last season at Bonneville.

Rigby players react after defeating Thunder Ridge 68-56 for the 5A District 5-6 girls basketball title at Rigby on Feb. 11.

Rigby's Tylie Jones pushes the ball down the court as Rigby takes on Thunder Ridge on Feb. 6.

Skyline's Mattie Olson dribbles the ball down the court during a game last season at Bonneville.

Take a look at Rigby’s girls basketball roster this season.

“I’ve never had that many,” head coach Troy Shippen said. “Ever.”

That represents tremendous news for the Trojans on its face, of course. They’ll have experience. Chemistry. Familiarity. Teams usually feel fortunate with four or five seniors a year. Rigby has nearly double that.

Still, for the Trojans, the best part about having nine seniors involves unfinished business. Last season, Rigby advanced to the 5A state tournament, only to drop two straight games.

For that reason, having nine seniors may benefit Rigby in a way the team hasn’t experienced before.

“They’ve been playing a lot of basketball this summer,” Shippen said. “Even though we had covid, they’ve been trying to find places to play. They’re anxious to get back and see if they can get back there again.”

Unfortunately for Shippen and the Trojans, that comment proved prescient. On Thursday, Rigby postponed its season opener, a Saturday road matchup with Skyline, because of COVID-related issues. Officials are working to find a replacement date.

Instead, if all else goes to plan, Rigby will open the season Thursday on the road against Hillcrest.

The good news for the Trojans is that they figure to have the roster to survive missed dates like these.

The three key cogs will be Tylie Jones, Brooke Donnelly and Hallie Boone, three seniors who offer versatility and experience. They’re competitors, Shippen said, which is important because they’re tasked with replacing one of the team’s best players in Ruby Murdoch. She graduated in May and joined the women's team at Wenatchee Valley in Washington, leaving leadership responsibilities at the feet of that trio.

We can learn more about them by examining their recent experience.

Last season, Jones returned from a knee injury in time for Rigby’s first game of the 5A District 5-6 tournament, a win over Madison. She tallied 11 points.

Donnelly fashions herself more as a marksman. In the Trojans’ opening game of last year’s 5A tournament, a loss to Rocky Mountain, Donnelly connected on three triples in a three-minute span, kicking off a 13-0 run that helped her team capture an early lead.

If so, everyone involved with the Trojans’ operation likes their chances of returning to the state tournament, especially considering the way their two games went last season.

Their opponents, Shippen said, shot something like 70% from distance.

“We had some bad breaks there,” Shippen said. “The girls are anxious to get back.

“A big part of our team is going to be learning our roles and learning how to play with each other, because we do have a lot of girls. A big challenge is going to be having everybody play their roles, play team basketball.”

For Rigby, the challenge resides in doing so against what Shippen called a “loaded” 5A District 5-6.

He complimented league rivals Thunder Ridge, Highland and Madison, calling the league “open” and insisting several teams will compete for the league crown.

The Trojans had their season-opener delayed because of COVID-19  issues, but they return nine seniors, more than head coach Troy Shippen has ever had. A team that made the 5A state tournament last season will compete for a return trip this year.

The Tigers have had a rough couple of seasons, including a 4-18 finish last year, but third-year head coach David Vest likes this group, headlined by dual-sport athlete Kennedy Robertson.

One of the biggest question marks in 4A this season revolves around Bonneville, which went undefeated and won state last season, but returns little of that experience, and has a new head coach.

The Diggers, who won back-to-back 3A state titles in 2018 and 2019, will enjoy the return of senior center Mardee Fillmore.

The Miners are trending in the right direction, returning key starters in a season where they will attempt to make back-to-back appearances at the 1AD2 state tournament for the first time since 2014-2015.

Thunder Ridge will lean heavily on Davenport, a Boston commit and a senior who averaged 13.4 points last season.

Mackay head coach Kashia Hale called Moore one of the best players in eastern Idaho, citing her versatility and ability to compete with players from an assortment of classifications.

If Bonneville replicates a fraction of its 2019 success, it will likely be in large part thanks to Hunt, a senior who played a complementary role on that state title team.

Fillmore will lead the charge in Sugar-Salem’s attempt to return to the 3A state tournament, where the Diggers captured titles in 2018 and 2019.

A sophomore last season, Olson led everybody in scoring on her team and in District 6, tallying 17.5 points and 5.2 rebounds per game.

Nov. 13: Bonneville begins its state title defense with a home contest against 5A Thunder Ridge, 7:30 p.m.

Dec. 9: Rigby will visit Thunder Ridge in a matchup of last season’s 5A District 5-6 tournament winner and runner-up, 7:30 p.m.