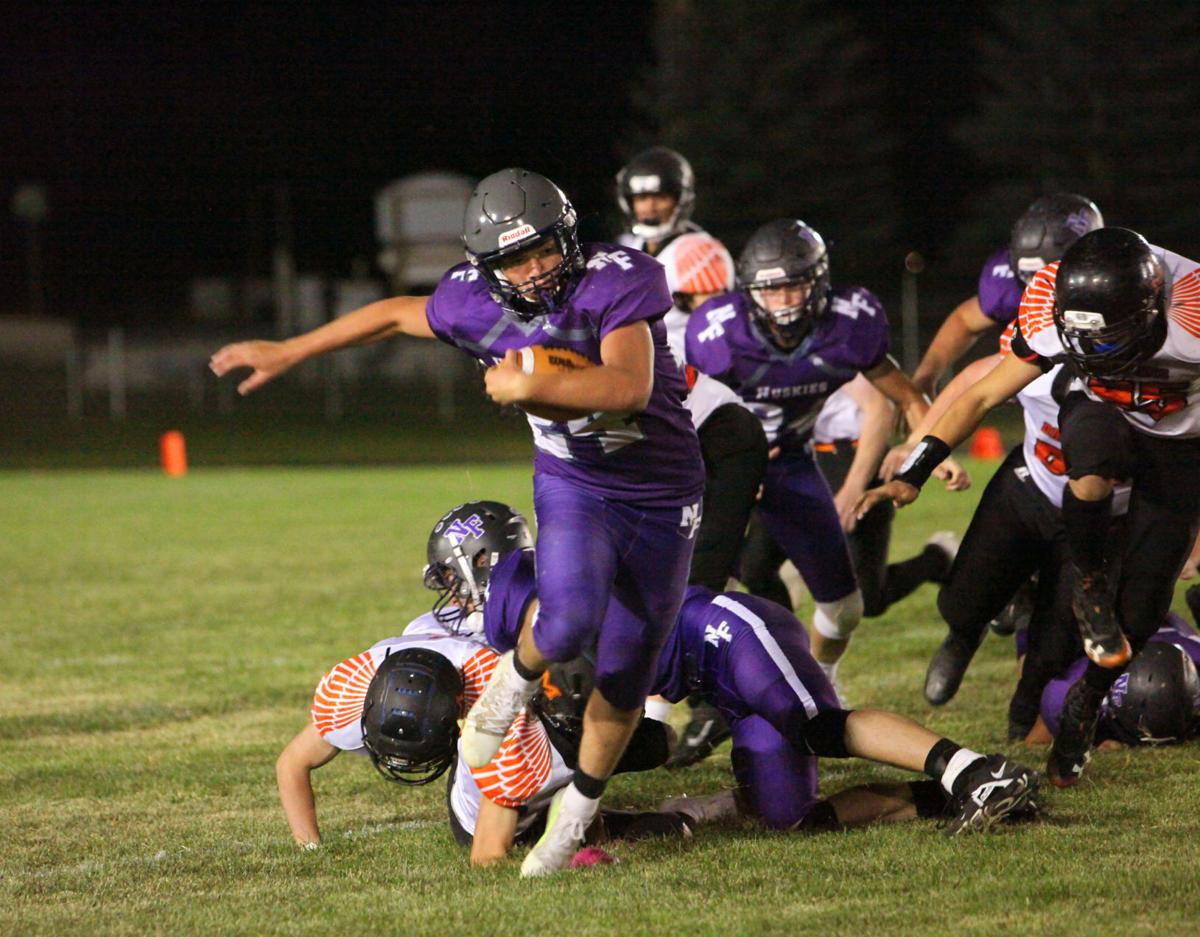 AJ Hill slips away from a Malad defender. 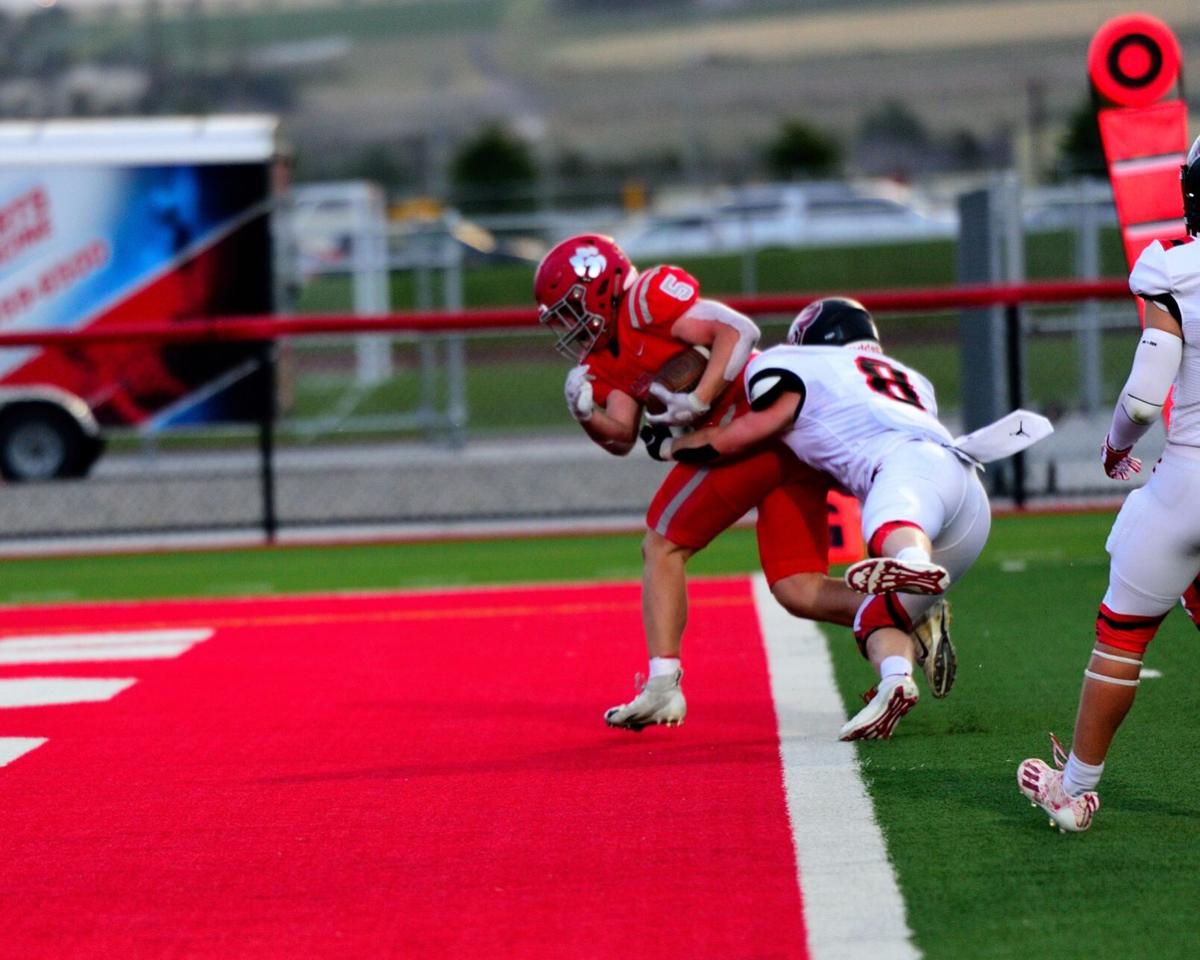 Madison running back Ben Dredge gets across the goal line. 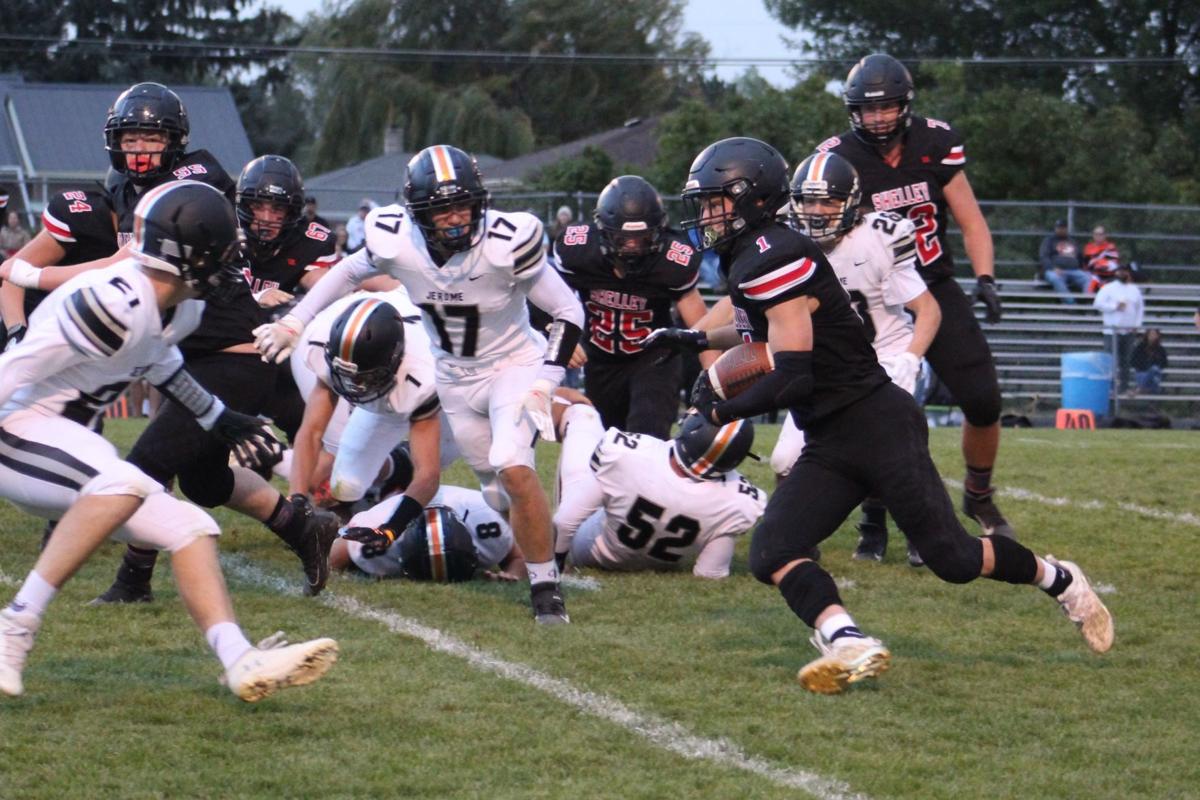 Ryker Clinger has emerged as a top running threat for Shelley. 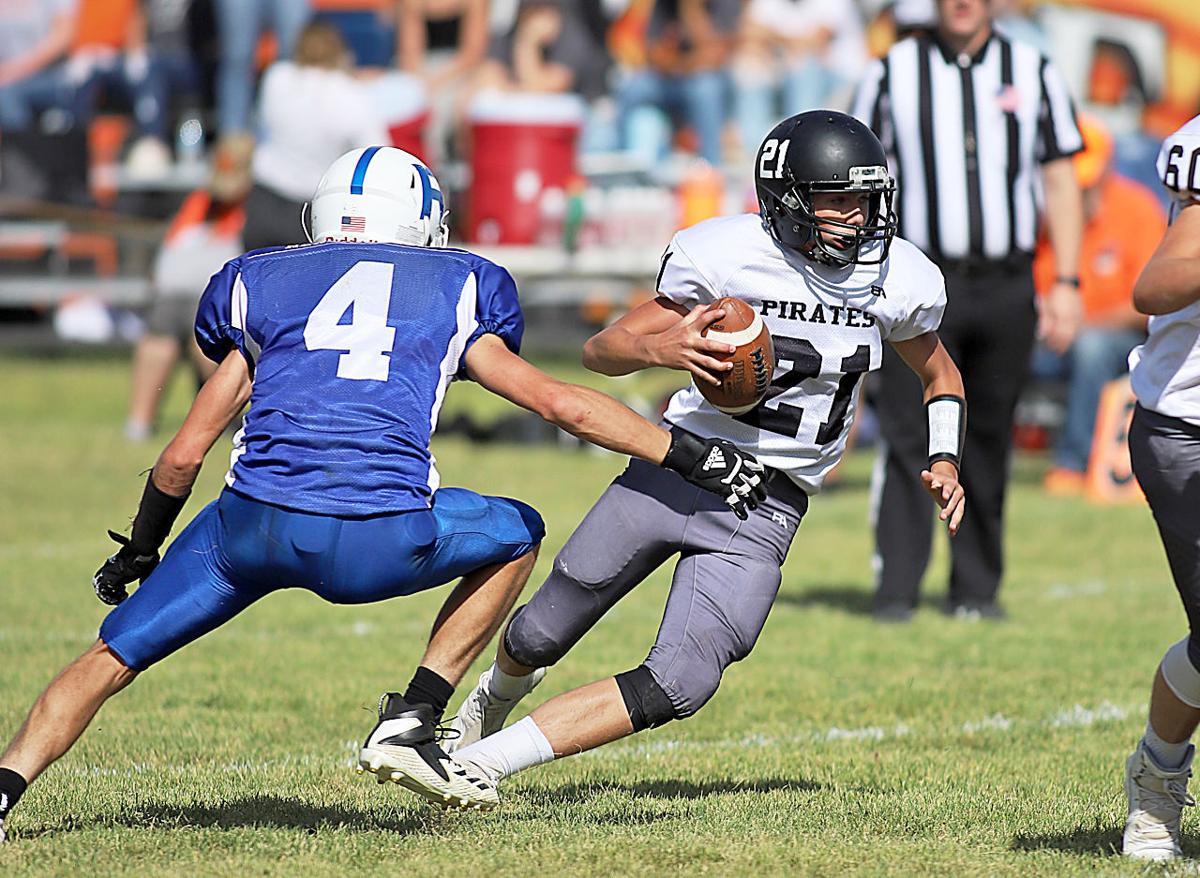 AJ Hill slips away from a Malad defender.

Madison running back Ben Dredge gets across the goal line.

Ryker Clinger has emerged as a top running threat for Shelley.

Week 3 of the high school football season is officially behind us, which means it's time to recap the action that unfolded this Friday.

Easton Kerbs snagged an interception on the opening drive of the game to get the Cougars the momentum. South scored on the following possession.

“To start the third quarter we wanted to come out and run the ball and Rylan Miller had a couple of really good runs and we were able to just kind of march down at the start of the third quarter and score,” said South Fremont head coach Chad.

South Fremont then stopped an Aberdeen drive that went down to the twenty where the Tigers turned the ball over on down.

Aberdeen then decided to send a corner blitz leaving Cooper Hurt open on quick fade route. Peebles slug the ball to Hurt who outran the defense for an 82-yard touchdown.

Aberdeen scored twice but both of their scores were in fourth quarter garbage time. Hill believes his defensive line provided the key to shutting down Aberdeen’s ground-based attack.

“I thought they played a great game last night,” Hill said. “They kind of controlled the run game all night long. And that’s what Aberdeen wants to do. They want to run the ball. We shut that down pretty much and they had to throw the ball. I thought our dbs were ready. We kind of got them in long yardage situations so we kind of knew when they were going to pass. Defensively we looked good. Especially up front.”

The Cougars only allowed 29 yards rushing and snatched two interceptions.

In addition to Kerbs interception, linebacker Hunter Hobbs grabbed a one-handed interception in the fourth quarter that put a finishing touch on the all-but sealed game after the Tigers scored and recovered an onside kick early in the fourth.

“It was a pretty impressive play from his linebacker position,” Hill said. “He was kind of stumbling and he just stuck his hand up there and one hand. It was an impressive athletic catch. I wasn’t expecting that out of him.”

Peebles also grabbed a would-be interception but another defensive back was called for a penalty earlier in the play.

Peebles passed for 241 and three touchdowns. The Cougars ran for 126 yards on 24 attempts.

The Cougar will play the blue Cougars next week in Firth before starting the more difficult 3A portion of their schedule.

The Tigers may have gone winless last season, but that's seeming more and more like a bygone era.

With a 21-12 win over Thunder Ridge Friday night, Idaho Falls improved to 3-0 on the season, kicking off the season with three straight wins for the first time in eight years.

In the win, Idaho Falls running back Kyan Jesperson racked up 185 yards rushing and three touchdowns, while quarterback Skyler Olsen completed 12 of 16 passes for 120 yards.

The Tigers will visit Century next week.

The Diggers scored the first two touchdowns of the game on back-to-back drives in first and second quarter.

Star Valley scored a touchdown of their own on the following possession but Sugar answered late in the third quarter then held Star Valley for the rest of the game.

“In our experience playing them the last four years, they want to run the football and I think our defensive line really stepped up and made it very difficult for them to make any sort of run game going,” Sugar-Salem coach Tyler Richins said.”They overall were probably the MVP’s of the game just being able to get them out of their comfort zone and make it difficult for them.”

“I think Boyd Sorenson had a remarkable night,” Richins said. “He’s very difficult to block with just how fast and strong he is. He caused a lot of problems for them up front.”

Carson Harris led the Diggers in absence of his older brother, Ryan who went out with an elbow injury in the Diggers opening game. Harris rushed for 94 yards on 18 carries.

“He’s a very physical runner,” Richins said. “He’s not a real big kid but he’s pretty low to the ground and difficult to tackle. The line lead blockers made some great holes for him tonight. I don’t know the stats but I know that he had a lot of yards after contact being able to stay low to the ground. He’s a strong runner and made things happen for us.”

Richins said he doesn’t expect Carson to dominate carries every week but believes he’ll shoulder much of the run game until Ryan Harris comes back from injury.

“With Ryan being hurt, a lot of that shared responsibility has shifted directly to Carson,” Richins said. “We suspect when Ryan gets back ready to play again Ryan will shoulder some of that workload. But, we have a lot of capable backs but really our goal last night was to get back to doing what we want to do and establishing the run game and not turn over the football."

The Diggers hope Harris will come back after their week 5 bye for their game against Preston.

Quarterback Daniel Neal completed 7/12 passes for 88 yards and a touchdown without any interceptions after throwing four in the previous contest.

The Diggers play Marsh Valley(1-2) next Friday in Arimo.

The Bobcats shutout the Knights in the first quarter but didn’t start scoring until the second quarter. Then the Bobcats put a flurry of points to go 21-0 at halftime.

“We picked up our urgency,” said Madison head coach Chandler Rhoades. “We were a little bit sluggish to start. Then we just played with more urgency in the second quarter and kind of got things going.”

The Cats’ once in third and fourth quarters on 34 and 42 yard runs from quarterback Kieren Valora and running back Ben Dredge.

The Bobcats ran for 122(Bear River) and 143(Lewiston) yards in their first two games, but decided to emphasize the run game on Friday. The Cats racked up 212 rushing yards averaging 6.2 yards-per-carry.

“We wanted to try to be physical up front and run the ball,” Rhoades said. “The line did a good job and our running back Ben Dredge ran the ball really hard and made a lot of plays for us tonight.”

“The line did a really good job blocking for him and he has really good vision and really good feet,” Rhoades said. “He’s able to find creases. He’s a strong kid and when he gets in the open field he has enough speed to separate and create explosive plays.”

The Bobcat defense played their best game of the season allowing only 170 yards of total offense. They also scored themselves when Cody Rydalch nabbed an interception and returned it for a touchdown in the second quarter.

“I thought our defense was good,” Rhoades said. “Really really solid. We scored on defense. We stopped them and we were physical and I thought they did a really good job of being disciplined.”

Madison will play another 4A team from Idaho Falls at home next week when Bonneville comes to town. The Bees have an 0-3 record.

At Mackay, Warriors quarterback Jrew Plocher rushed 11 times for 195 yards and five touchdowns. He finished 3 for 4 for 157 yards through the air with touchdown passes of 85 yards and 72 yards.

Parker Strahm also had a notably good night, passing for a 72-yard score and rushing for 48 yards.

Watersprings (1-2) hosts Grace next Friday. Mackay (0-3) is on the road to play Murtaugh JV on Friday.

At Rockland, Tyler Wanstrom had eight carries at totaled more than 100 yards with three touchdowns for the Pirates.

Treyton Miler has 16 carries for 132 yards and two touchdowns

Butte County had over 300 yards rushing and the defense came up with two interceptions.

“We played good all around,” coach Sam Thorngren said.