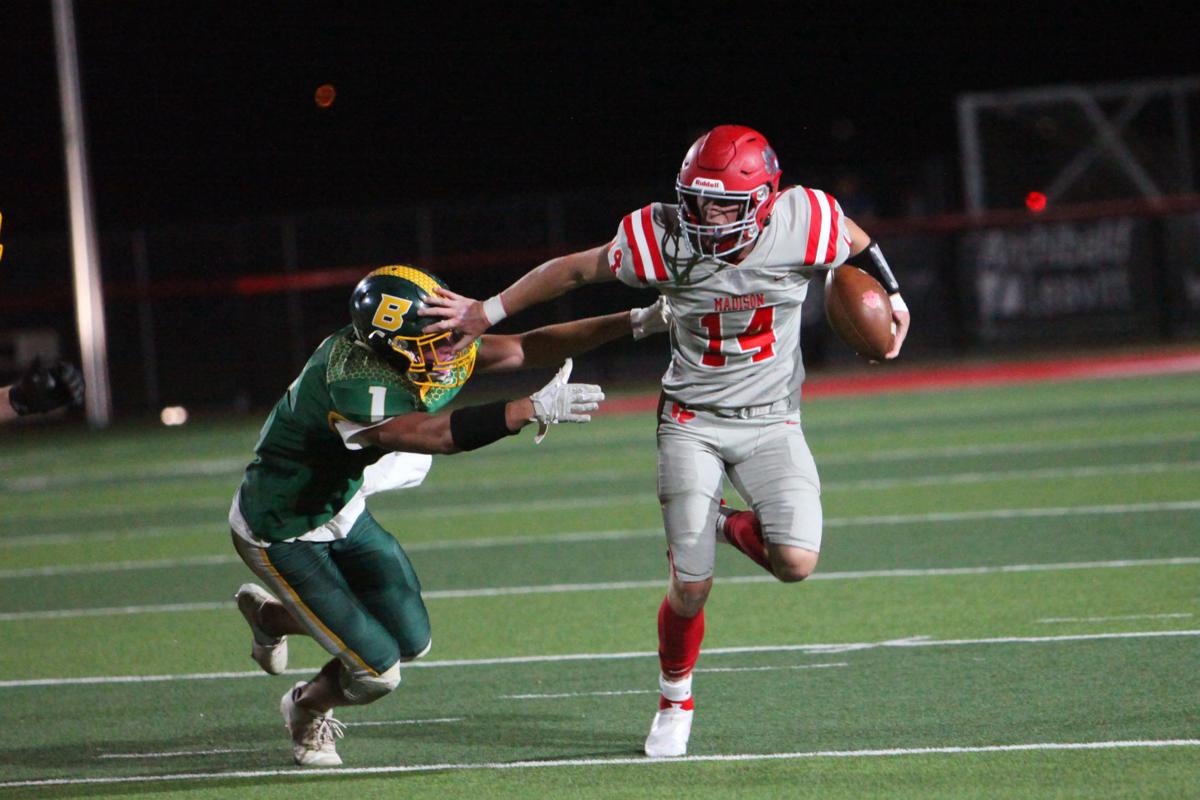 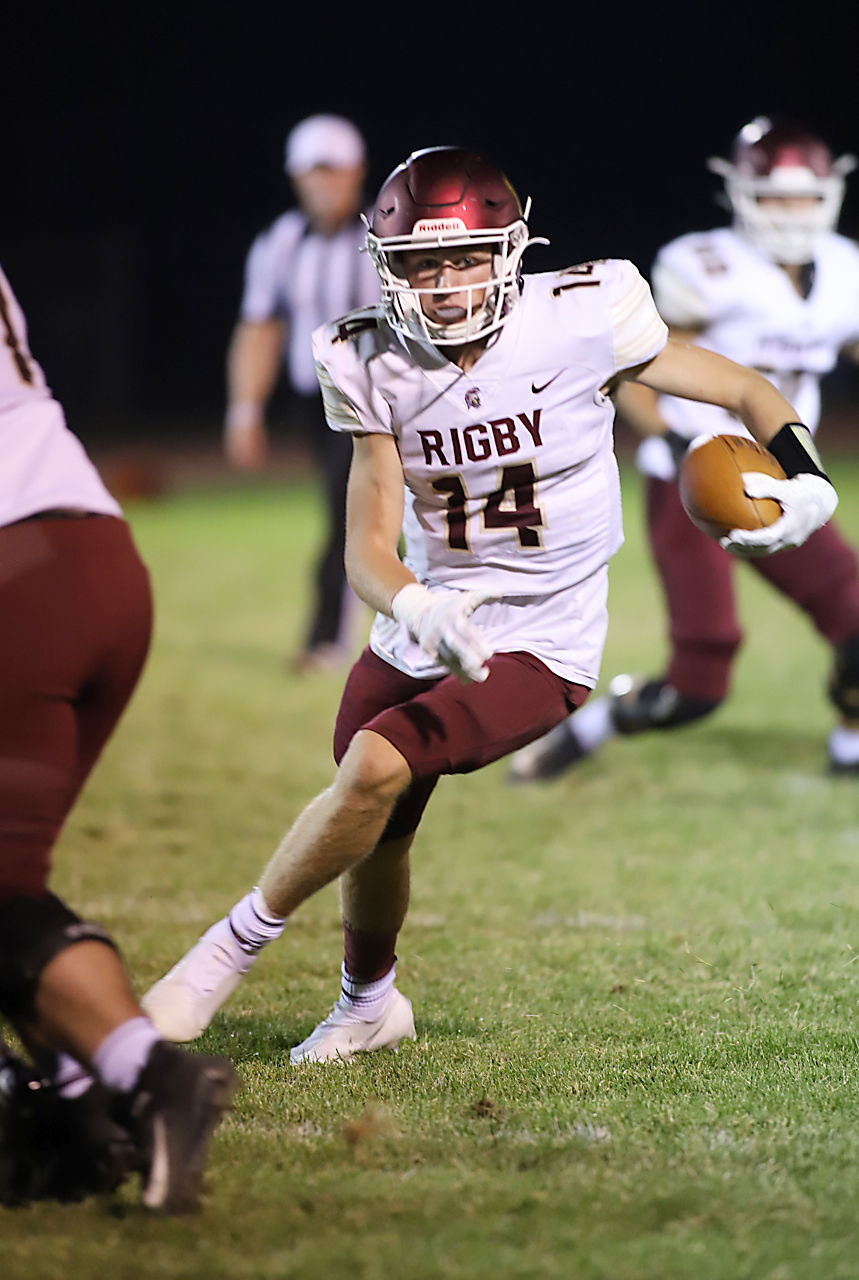 Rigby receiver Taylor Freeman cuts upfield on his way to a touchdown last week during a 35-0 win over Hillcrest at Thunder Stadium. 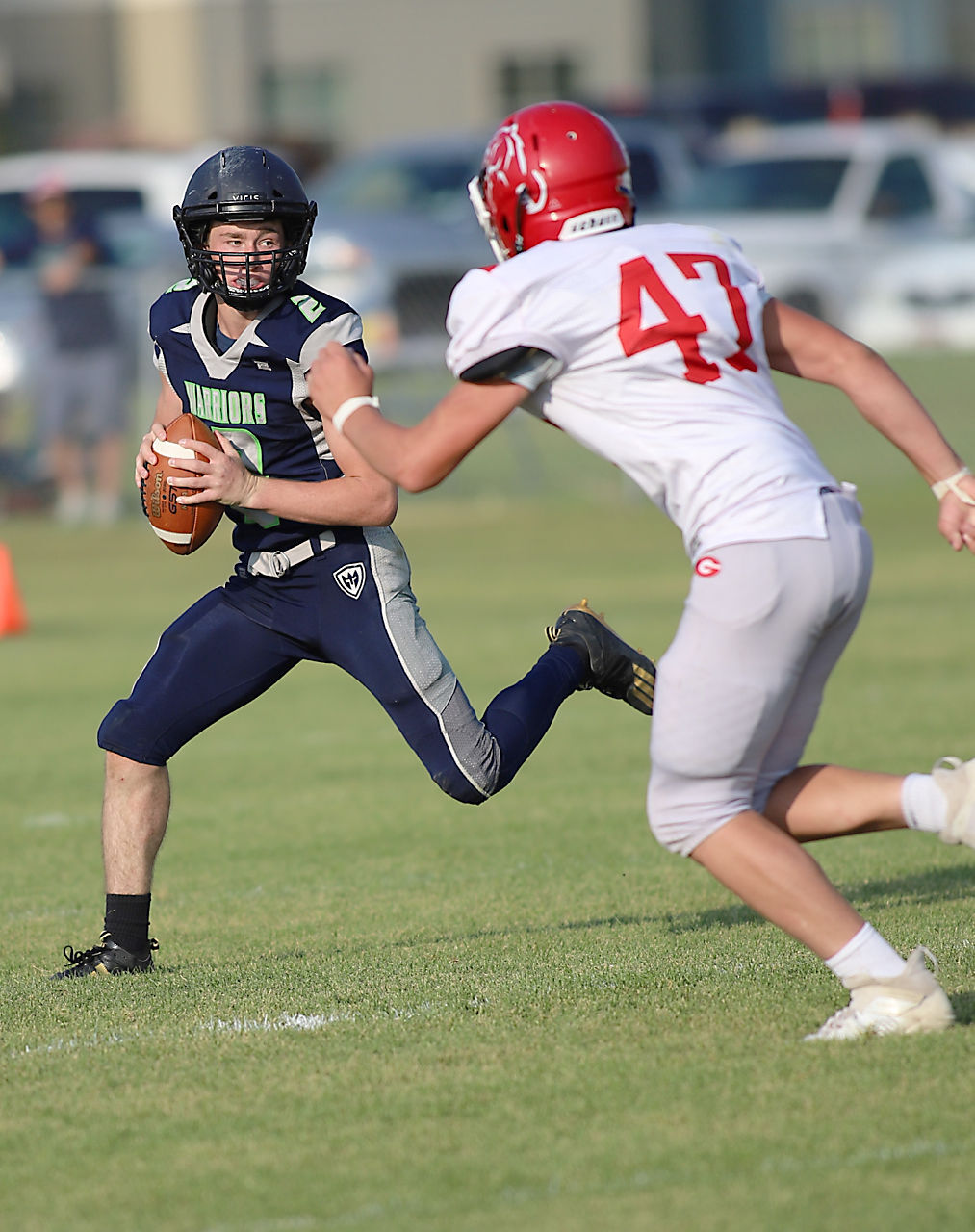 Rigby receiver Taylor Freeman cuts upfield on his way to a touchdown last week during a 35-0 win over Hillcrest at Thunder Stadium.

In Week 4 we saw a few interesting results: Sugar-Salem got back to .500, Shelley and Idaho Falls remained perfect, and Rigby throttled Hillcrest. Here’s a recap of Friday night’s action.

At Marsh Valley, Sugar-Salem jumped out to a first-quarter lead on the way to a 28-14 win over Marsh Valley.

Carson Harris rushed for a 12-yard touchdown and Daniel Neal completed a touchdown pass to Cooper Butikofer to put the Diggers up 13-6 in the first.

Neal finished 14 of 21 for 217 yards and two touchdowns. Jonah Schulthies caught seven passes for 114 yards and one touchdown.

Sugar-Salem led 28-6 in the third quarter before Marsh Valley scored with 43 seconds remaining to cut the deficit.

The Diggers, who lost their first two games, have won two straight.

At Raft River, in a battle of two ranked and unbeaten 1AD1 teams, it was Raft River taking advantage of miscues to rally for a 46-28 win.

“We really controlled the game for the most part,” Butte County coach Sam Thorngren said. “But we made some choices that came back to haunt us.”

The Pirates held the lead going into the second quarter 20-18. In the second, Butte County initially had a bigger lead, but a penalty nullified a score.

In the third, Butte County still held the lead by two points and made a 95-yard drive that was eventually halted at the four-yard line.

The Pirates fumbled the ball on a pass and fumbled on a kickoff in the fourth quarter, giving the Trojans two quick scores to take the lead.

Treyton Miller had 164 yards and three touchdowns for Butte County, and Tyler Wanstrom went 6 for 11 passing with an interception. Braxton Gamett had four carries for 56 yards and was solid on defense, Thorngren said.

Watersprings can’t keep up with Grace in 41-26 loss

At Watersprings, Jrew Plocher threw for 263 yards and three touchdowns and also had a team high 13 tackles in a 41-26 loss to Grace.

At Madison, the Bobcats celebrated homecoming with a 26-7 win over Bonneville to improve their season record to 3-1.

The Bobcats started the scoring with a 10-yard touchdown pass to Logan Crane in the front corner of the endzone with four minutes left in the first quarter. Madison then scored on the next possession ending with a 26-yard touchdown throw from quarterback Kieren Valora to wide receiver Easton Kirk.

After Valora ran the ball in late in the first half, Logan Crane finished off the Cats’ scoring with a leaping touchdown grab that he snagged before falling on his rear on the way down just in bounds.

Though the offense played well in spurts, the Bobcat defense was the unit that dominated shutting out the Bees late and nabbing three interceptions. Zack Pena, Jeff Williams and Cameron Allen each came down with a pick.

“I just thought we were physical up front and our coverages were pretty tight, pretty solid for most of the night and our secondary guys made some good breaks on the ball(s) and caught them.”

The Bobcats outgained the Bees 296 to 218. Valora threw for 171 yards with three touchdowns and three interceptions and rushed for 69 yards.

Madison is 2-0 against the two Idaho Falls area teams its played so far this season. They’ll have a chance to sweep the area when they play Skyline, Idaho Falls, and Thunder Ridge in the next month or so.

“It was a great win for our kids,” Rhoades said. “It was homecoming for us so we had a great crowd. The community was really involved. It was just a great day for Madison all around.”

Madison will play 4-1 Highland in Pocatello next week for the Cats’ first district game of the year. Last season, Highland placed second in District 5-6 and beat Madison 30-14 in the teams’ showdown in Bobcat stadium.

Shelley stays unbeaten with 49-0 win over Canyon RidgeDon’t look now, but for the first time in five years, Shelley is 4-0.

The Russets used a 49-0 win over Canyon Ridge Friday night to earn their fourth straight win to open the season, the first time since 2016 the program has pulled off such a feat. Shelley’s defense also generated four turnovers in the win.

For the Russets, there’s even more good news: Last week, they became Class 4A’s No. 5 team in the media poll, and Pocatello (No. 1) and Skyline (No. 2) both lost. That means Shelley will likely move up a spot or two in the rankings.

The Russets will host Hillcrest next week.

Idaho Falls keeps spotless season rolling with win over CenturyIf you thought Idaho Falls was having a nice bounce-back season last week, well, the Tigers are having a great one now.

Rigby rolls over Hillcrest in 35-0 winNo surprises surfaced Friday night at Thunder Stadium. Rigby blew out Hillcrest, 35-0, helping the Trojans move to a perfect 4-0 on the season.

Rigby will visit Thunder Ridge next week, while Hillcrest will visit Shelley.

At Firth, South Fremont fell to Firth 33-21 despite outsourcing the blue Cougars 21-14 in the second half.

Firth scored the first three touchdowns of the game.

“They were just kind of running a lot of off-tackle read option stuff trying to get outside and they scramble,” South Fremont head coach Chad Hill said. “Their quarterback’s really agile. We had some guys come out of coverage to try pull him up and he threw it over the top on us when they got out of coverage. He did a good job of extending plays.”

South Fremont’s high powered offense struggled in the first half.

“Firth’s speed on the defensive line just kind of got to us a little bit,” Hill said. “Our offensive line was getting a little confused and they were getting a lot of pressure on Kaimen (Peebles) and we were struggling to run the ball.”

South Fremont scored first in the second half when Peebles connected on a 34-yard pass to Cooper Hurt to set up a one-yard touchdown run that put the red Cougars within a score.

After another Firth touchdown, Bryson Forbush caught a pass, spun off a defender, and outran the defense for a 51-yard score to draw within a score again.

Firth got the ball back with just over five minutes left and drove down the field and scored leaving less than a minute on the clock to push the score to 33-21.

Peebles completed 17 of 30 passes for 282 yards, with two touchdowns and two interceptions.

Despite the loss, South Fremont remains atop 3A district 6 will a record of 3-1. The Cougars will attempt to bounce back next week when they head to Blackfoot for a matchup with 1-2 Snake River.