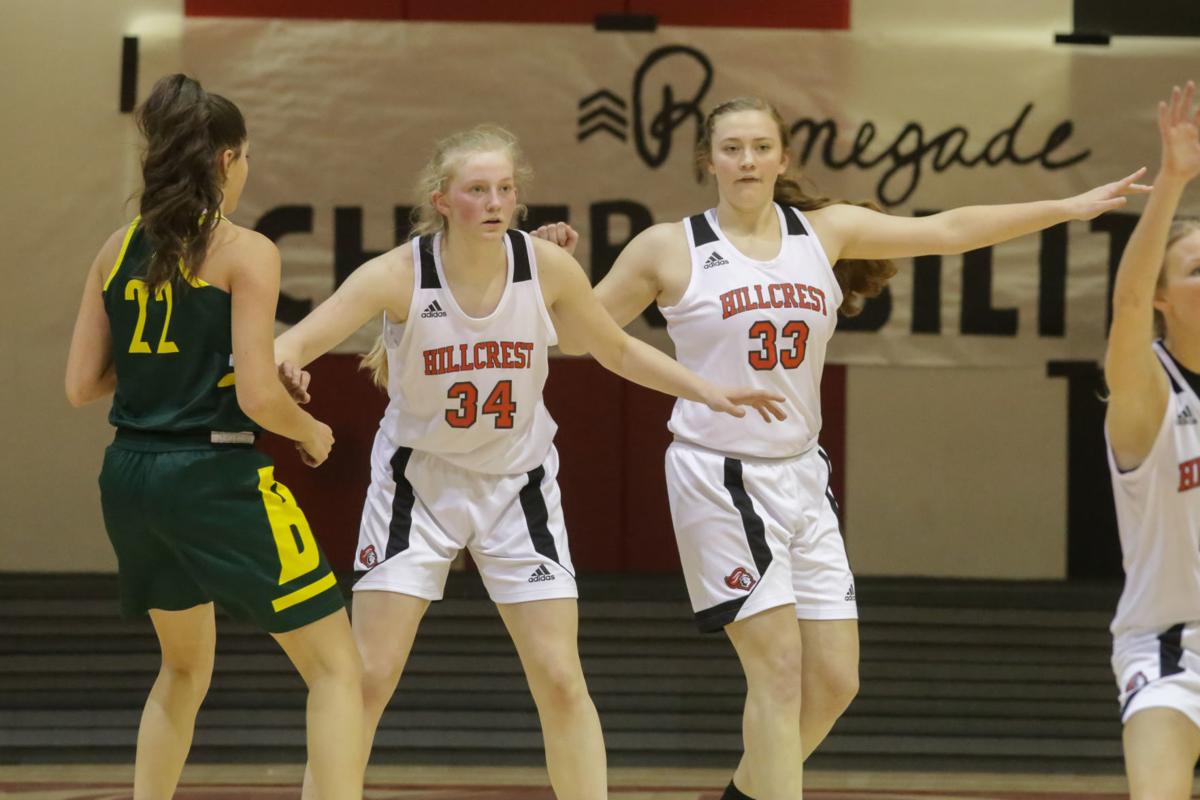 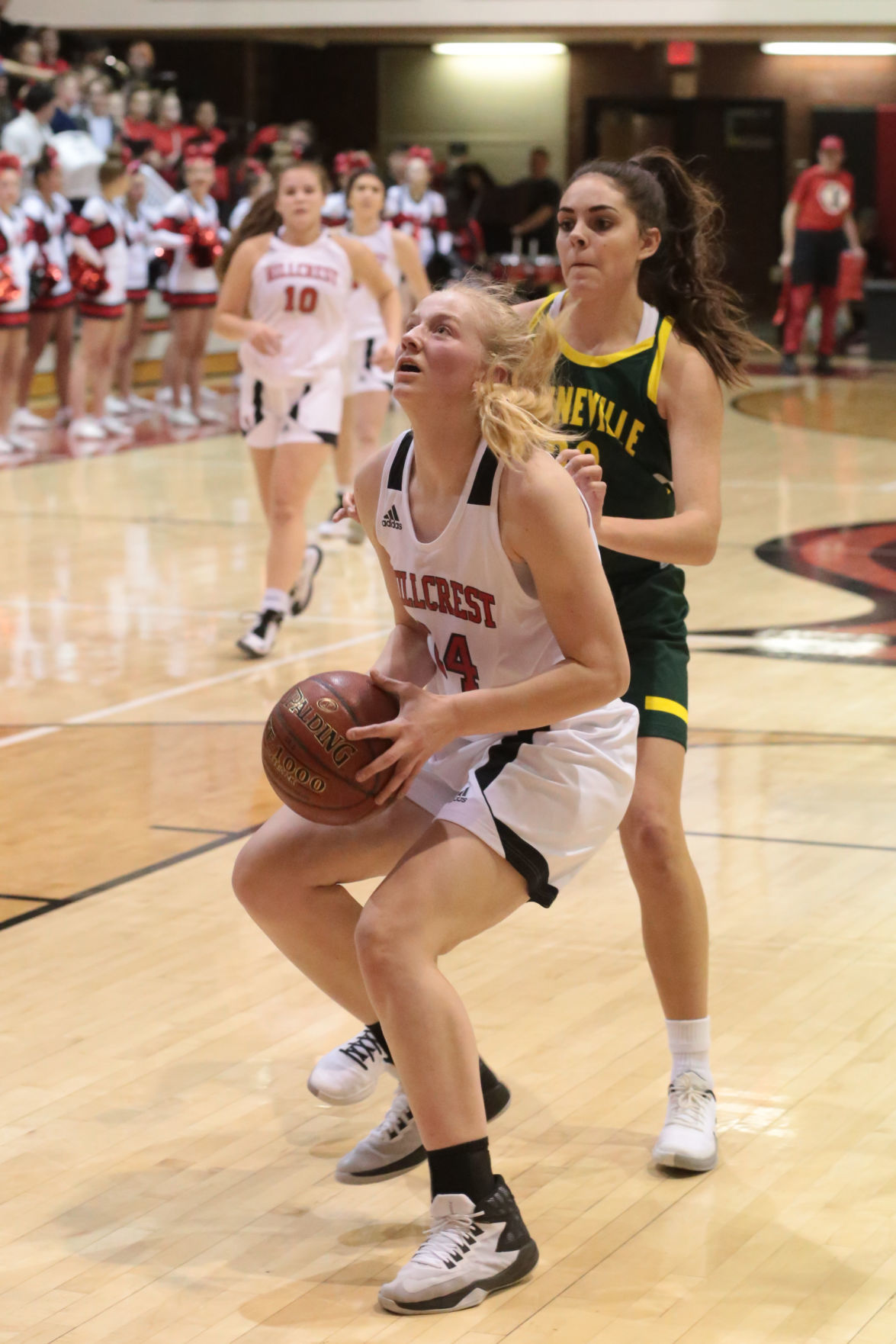 Hillcrest's Brooke Cook drives to the basket during Wednesday's game at Bonneville.

Hillcrest's Brooke Cook drives to the basket during Wednesday's game at Bonneville.

The name Cook has become synonymous with Hillcrest High School sports over the past 10 years.

Cassidy Cook (class of 2014) competed in volleyball, basketball and track, contributing to Hillcrest’s 2014 5A girls basketball state consolation trophy, winning six medals at state track and four consecutive Tiger-Grizz Invitational titles in 100-meter hurdles. Lindsay Cook (class of 2016) competed in volleyball and basketball, contributing to Hillcrest’s 2015 and 2016 5A District 5-6 girls basketball championships, three consecutive 5A state tournament appearances and graduating as Hillcrest record holder in three categories: all-time leading scorer (1,314 career points), all-time rebound leader (706) and single-season points (535 points as a senior). Bryce Cook (class of 2019), competed in basketball and was a member of Hillcrest’s 2018 5A state runner-up team and also qualified for state track as a junior and senior.

This winter, the next set of Cooks has made it to Hillcrest’s varsity basketball together. Aspen, a junior, returned to the Knights earlier this month after being out almost 18 months due to injury, and Brooke, a freshman, has been a varsity starter since the second game of Hillcrest’s jamboree in November. They are one of three sets of sisters on the team--the Larsens and Joneses are the others--and they estimate that this is the first time they have played on the same team since sixth grade.

Like Cassidy and Lindsay, Aspen said she and Brooke have a ‘twin sister thing’ happening where they know what the other is thinking and finishing each other’s sentences. That translates into games as trust and anticipating each other’s actions.

“Our sisters played and they did really well,” Aspen said. “I think it’s really cool to have someone to give positive reinforcement, but they can also tell you what you can do better.”

“It’s nice being able to play with someone with a lot more experience,” Brooke added.

Aspen’s injuries began with tendinitis in her foot during volleyball in 2018 and later, bone contusion.

She was instructed to let her foot heal on its own, and she missed volleyball and basketball her sophomore year as a result. She was a manager for basketball in the meantime, and Hillcrest head coach Alan Sargent said she attended every practice.

“I told her, ‘You don’t have to come to practice every single day.’ She said, ‘I don’t want to miss anything,’” Sargent said.

When it became apparent that her foot was not healing on its own, she had surgery last October and consequently missed another volleyball season. After three weeks of not being able to put weight on that foot, she rode a stationary bike and swam. She was cleared to return to basketball in time for the Jan. 14 game at Shelley.

“I just dove right in,” Aspen said. “I was told focus on defense. Offense will come. Go in and do my job for the two minutes I’m in the game.”

Sargent said he is being cautious with how much Aspen plays this season as to not risk re-injury. Having both Cooks in a game at once, however, does give the Knights strong inside presence.

“It’s crazy because not only do we have a little bit of height, but we have the length,” Sargent said. “It makes other teams not want to go in there.”

Aspen said she enjoyed watching Brooke play when she couldn’t. Brooke is currently Hillcrest’s youngest varsity starter, a role that was also true for Lindsay as a freshman. While she said it can be a little nervewracking being the youngest, it is not anything new. She used to play with Aspen and her classmates.

“I try not to think about it that much,” Brooke said. “We’re just playing basketball.”

They also will not be the last Cooks to play for the Knights, either. They have four younger siblings, and they said pretty much everyone in the family plays basketball.

1A Division I District 5-6 tournament getting an early start

While 5A, 4A, 3A, 2A and 1A Division II teams are concluding their regular seasons this week, the 1A Division I District 5-6 tournament begins today at Blackfoot. No. 3 seeded Challis plays No. 2 seeded Butte County tonight with the winner advancing to place No. 1 seeded Grace on Saturday. Tuesday is an elimination game between the losing teams of the first two games, and Friday Feb. 7 is the district championship game.

This is the last week of the regular season for everyone other than 1A Division I, and some district tournament seeds may require extra work to determine.

Through Monday evening’s games, there are currently three ties involving District 6 teams: Hillcrest and Skyline in 4A, Ririe and Firth in 2A and North Gem and Watersprings in 1A Division II. Should the ties remain after the regular season finales, tiebreaker scenarios ranging from head-to-head meetings to mutual opponents to coin flips will be used to finalize district tournament seeds.