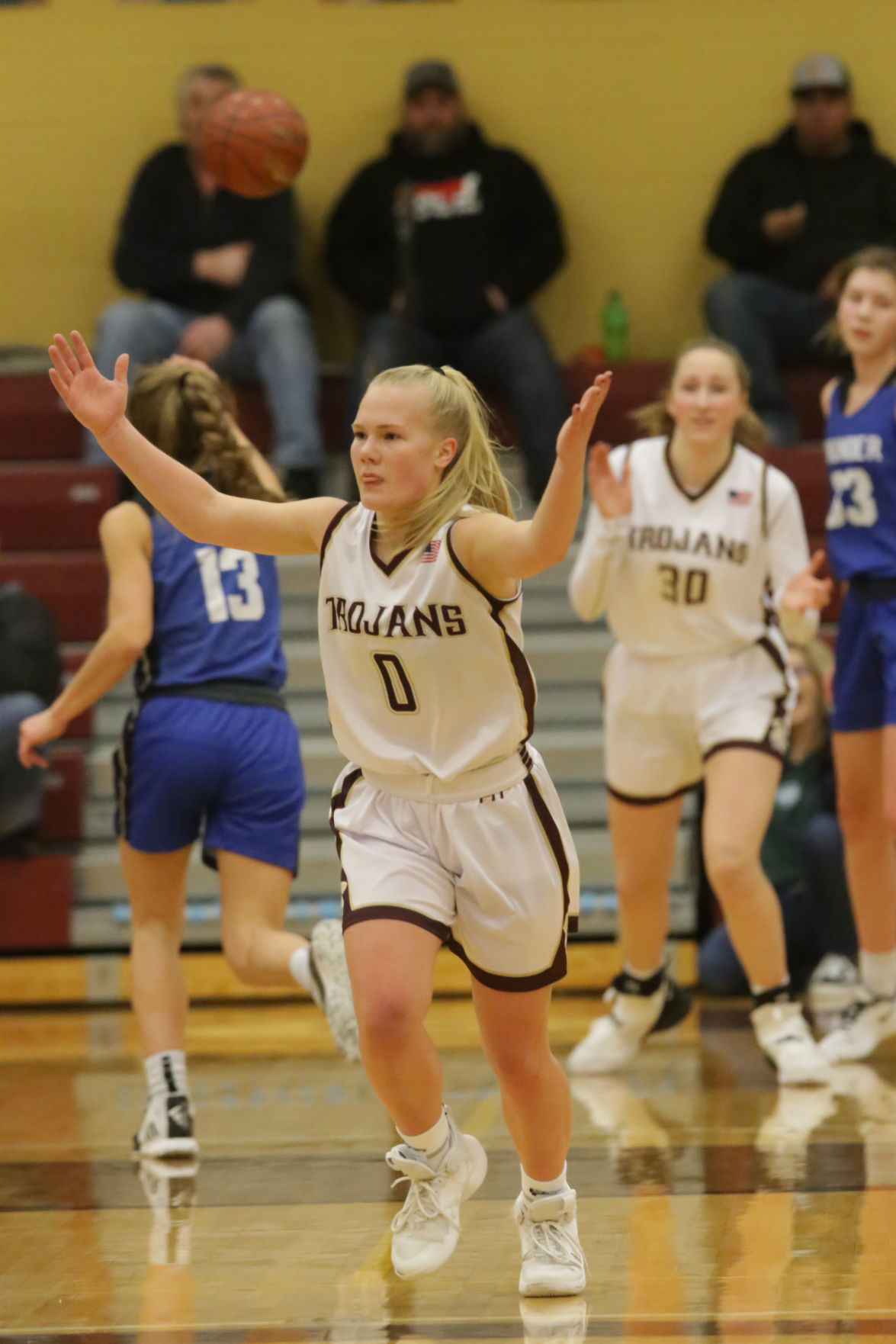 Rigby’s Ruby Murdoch reacts after hitting a 3-pointer at the buzzer to end the first half during Thursday’s game versus Thunder Ridge at Rigby High School. 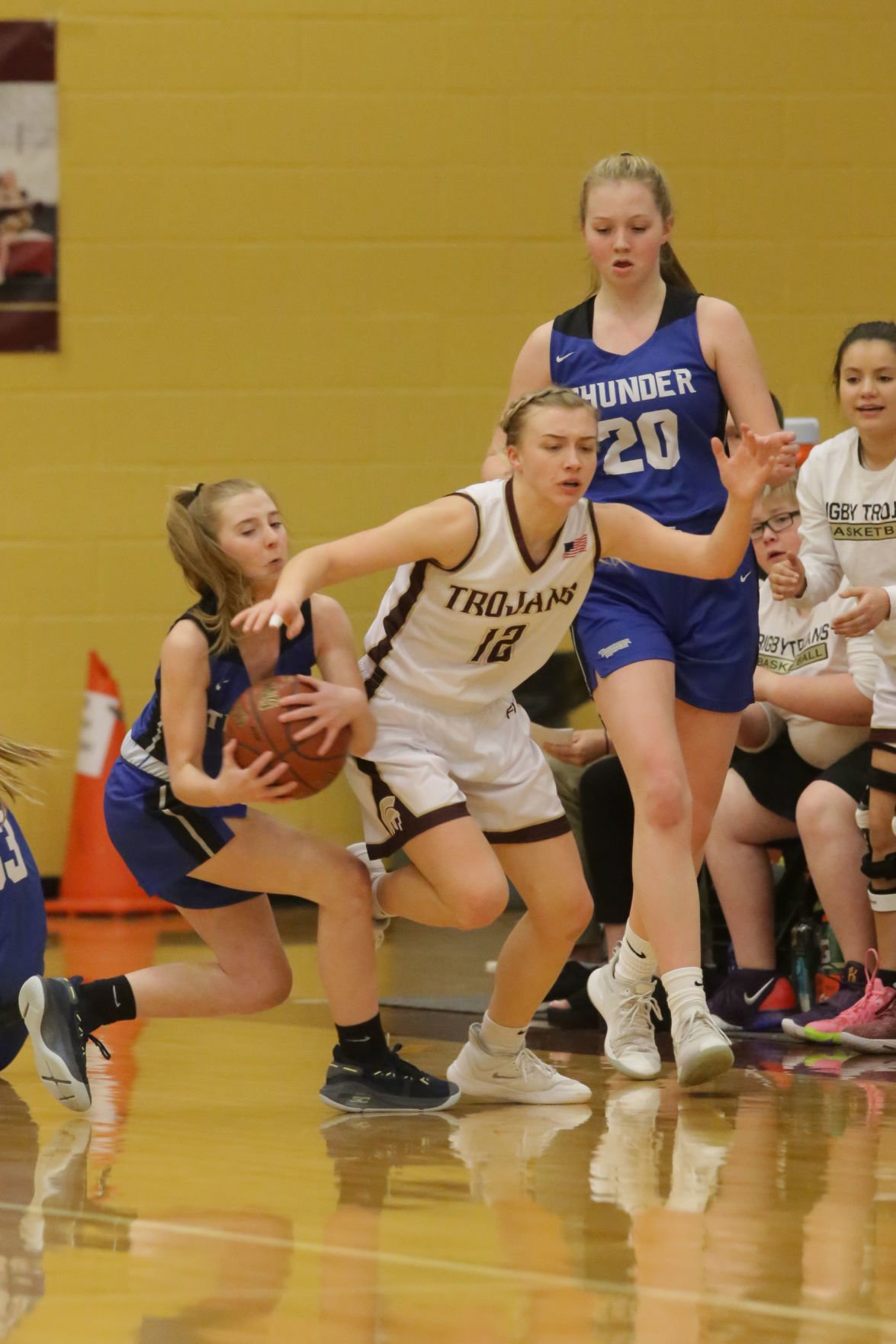 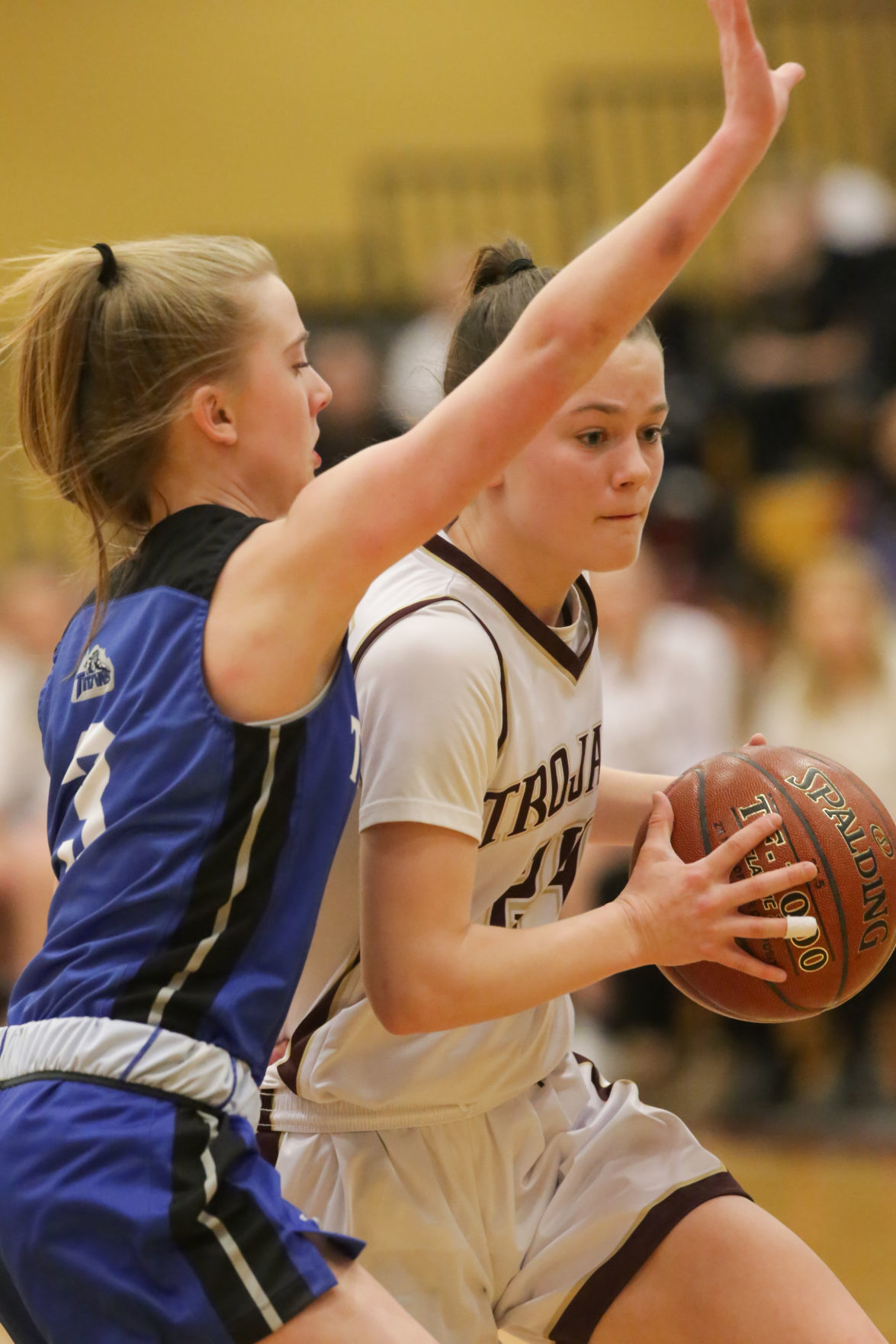 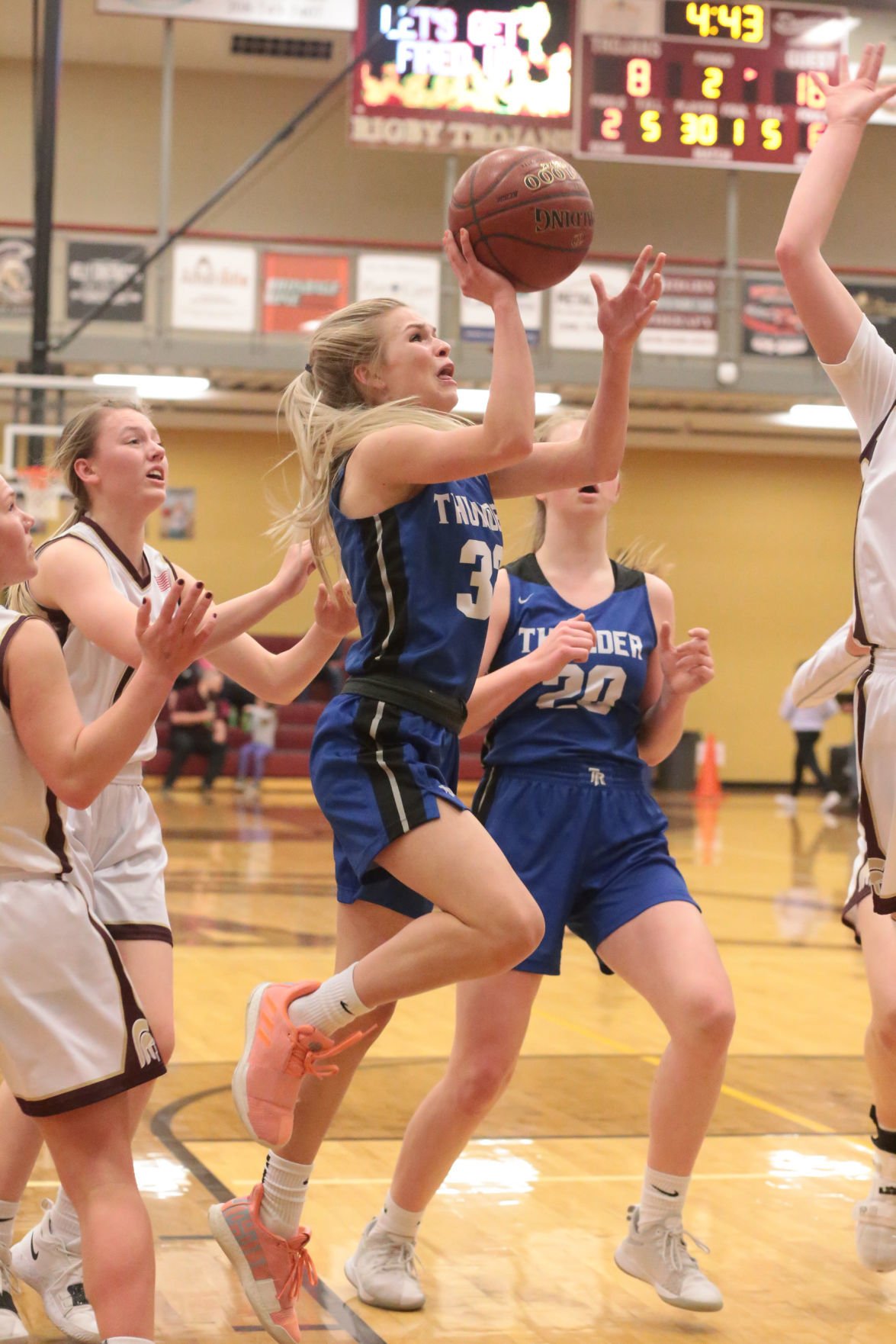 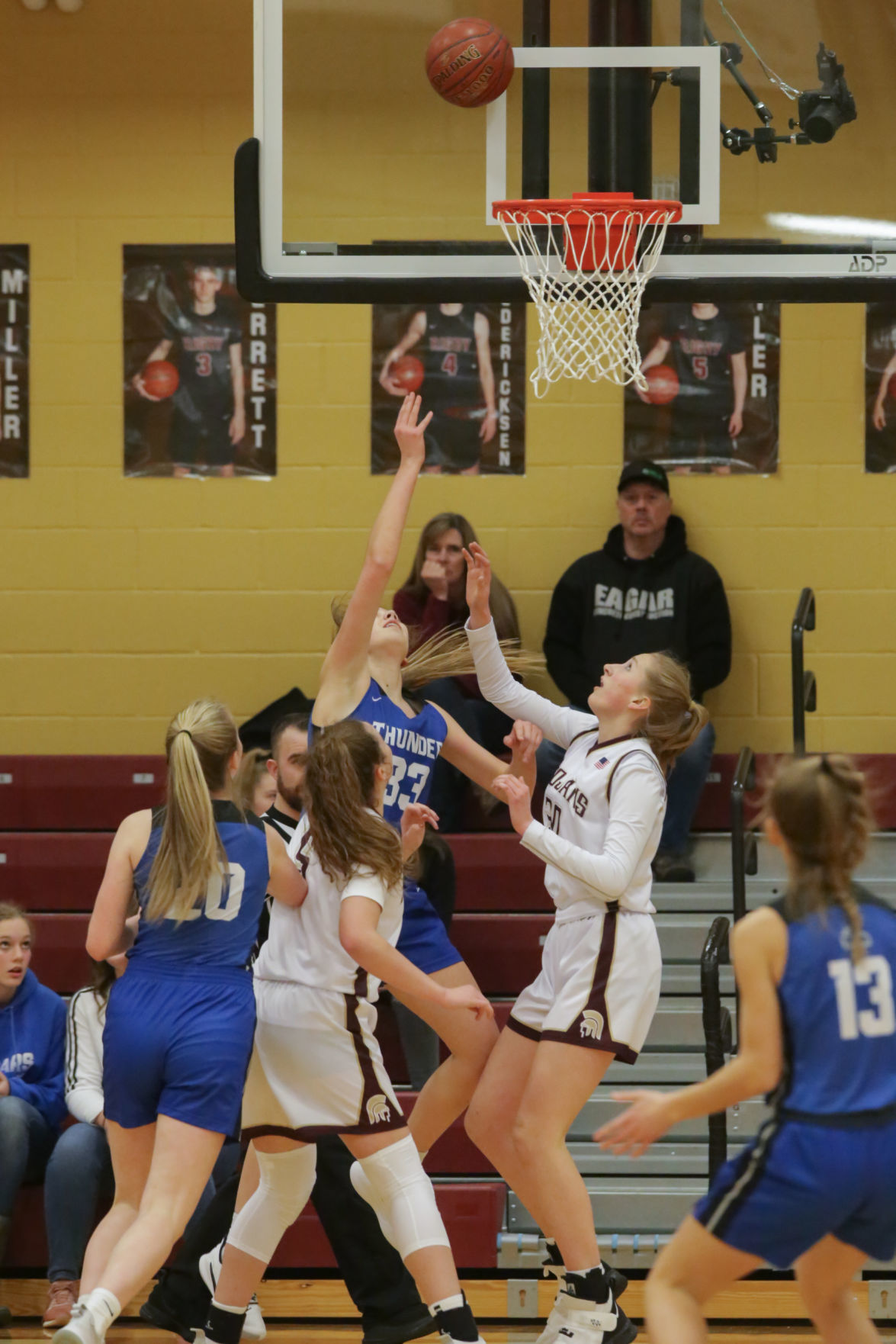 Rigby’s Ruby Murdoch reacts after hitting a 3-pointer at the buzzer to end the first half during Thursday’s game versus Thunder Ridge at Rigby High School.

Murdoch had been fouled while attempting a 3-pointer, earning her three shots.

She made all three, a stoic expression on her face each time the ball left her hands, to give Rigby its first lead since the third quarter. She did not show any emotion until the Titans called timeout with the clock reading 0.6, leaping off the court and letting out a yell as she met her teammates.

A half court shot by Thunder Ridge freshman Kennedy Stenquist hit rim at the buzzer on the final possession of the game, and pandemonium ensued as the Trojans celebrated the 49-48 win. No. 1 seed Rigby (18-5) will host Tuesday’s championship game versus the winner of Saturday’s elimination game between No. 4 seed Madison and No. 2 seed Thunder Ridge (15-8).

Upon exiting the locker room, Murdoch could not walk a few steps without accepting a hug, high five or congratulatory word from Rigby supporters. The post game euphoria ended a night of flashbacks for Murdoch, who was nails at the free throw line a year ago to lift the Trojans past Highland en route to the 5A District 5-6 title. She went 10-for-11 on free throws and had 15 points Thursday and went 11-for-16 a year ago in two overtimes to cap off a 22-point effort as Rigby outlasted Highland in the district semifinals.

“Oh my gosh, I was having them all night,” Murdoch said of the flashbacks. “There’s just something about districts. Basketball becomes my No. 1 priority. School is important too but so is getting to state. You know you have to get the wins to get to state.”

Rigby head coach Troy Shippen said his players were dancing in the locker room postgame. He, meanwhile, was speechless until returning to the gym.

After a few minutes, however, he had plenty to say about Murdoch and her preparation for moments like the final three seconds of Thursday’s contest.

“She spends an hour every day shooting as hard as she can,” Shippen said. “It’s before practice and she’s sweating shooting free throws, shots under pressure in game like situations. She and Brooke Donnelly and Kiersten Raymond.”

Murdoch’s foul shots were among many intense moments in a contest that showed why the Trojans and Titans were the top two seeded teams for the the district tournament. The Titans, who fell to Rigby 59-55 in their prior meeting on Jan. 22 at Thunder Ridge, ruled Thursday’s game early.

Thunder Ridge held Rigby scoreless until the 4:47 mark of the first quarter en route to a 14-7 lead to end the first quarter, stretching it to 21-12 in the second quarter before entering halftime up 24-20.

It set up a free for all in the second half. Eight lead changes occured in the third quarter, which Thunder Ridge ended with a 36-35 advantage thanks to Avery Turnage scoring with 21 seconds left. Both teams were in the double bonus by the fourth quarter and toed the line frequently. While Murdoch came up clutch for Rigby by going 9-for-9 from the line in the fourth, Stenquist was equally as clutch for the Titans. The freshman had eight points in the fourth quarter, including going 6-for-8 from the line.

She ended Thursday as Thunder Ridge’s leading scorer, coming off the bench to score 15 points.

“She’s just a girl that fills right in,” Thunder Ridge coach Jeremy Spencer said, adding that she played a quarter ‘here and there’ on varsity earlier in the season. “She played a fantastic game. I’m really proud of her to be able to handle that kind of a situation with that kind of pressure.”

Shippen and Murdoch said they were familiar with her from seeing her play JV and they were both impressed by her Thursday.

“She’s gonna be amazing,” Murdoch said. “She has the confidence of a varsity senior player.”

Tylie Jones had 13 points and Donnelly added 11 for the Trojans. Lauren Davenport had 11 points and Turnage added nine for the Titans. Spencer said Rigby is the one team the Titans have game-planned the most for this season, and they wanted the win Thursday. He was pleased, however, not only with how they played but with how they are already looking toward hosting Saturday night’s game versus Madison.

“Paige Clark said in the locker room, ‘There’s no business dragging this out,’” Spencer said. “I’m proud of them that way...just being mentally strong. Madison played Rigby tough the other night. We just can’t overlook them.”

5A District 5-6 girls basketball tournament semifinal, end 1stQ: No 2 seed Thunder Ridge 14, No 1 Rigby 7. Kennedy Stenquist came off the bench and got this steal and bucket for Thunder at 2:44 #idpreps pic.twitter.com/6zbszzHc8z

5A District 5-6 girls basketball tournament semifinal halftime: No 2 seed Thunder Ridge 24, No 1 seed Rigby 20. Rigby, which has has yet to lead, ended the half on 5-0 run, capped off by this 3 at the buzzer by Ruby Murdoch #idpreps pic.twitter.com/17825fwEJo

Lauren Davenport has five points for Thunder Ridge at halftime. She and travel teammate Brooke Donnelly of Rigby had a bit of a shooting contest going on in the last 3 minutes of the 2ndQ. Donnelly has 9 pts for Rigby #idpreps pic.twitter.com/4NcJ48OIL0

5A District 5-6 girls basketball tournament semifinal, final score: No 1 seed Rigby 49, No 2 seed Thunder Ridge 48. Senior Ruby Murdoch was fouled on a 3 and made all three free throws with three seconds left to win it for Rigby. What a game #idpreps pic.twitter.com/wMRBtoPmvu