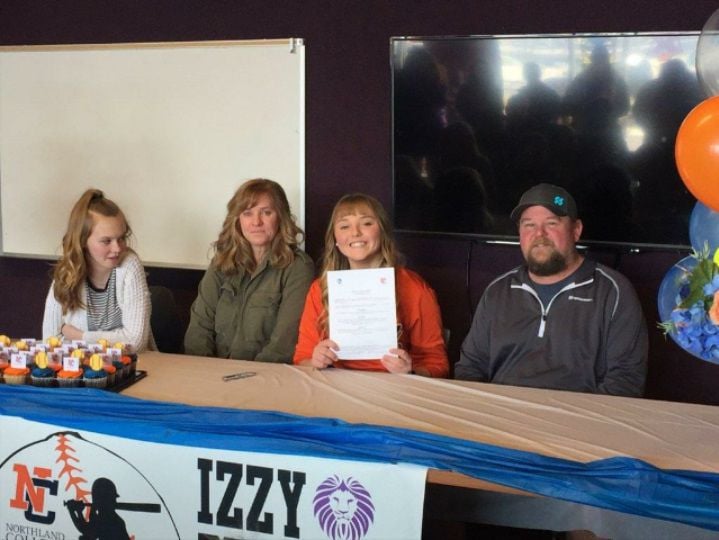 Joined by her parents and sister, Elizabeth Peters holds her signed letter of intent Thursday at Compass Academy. 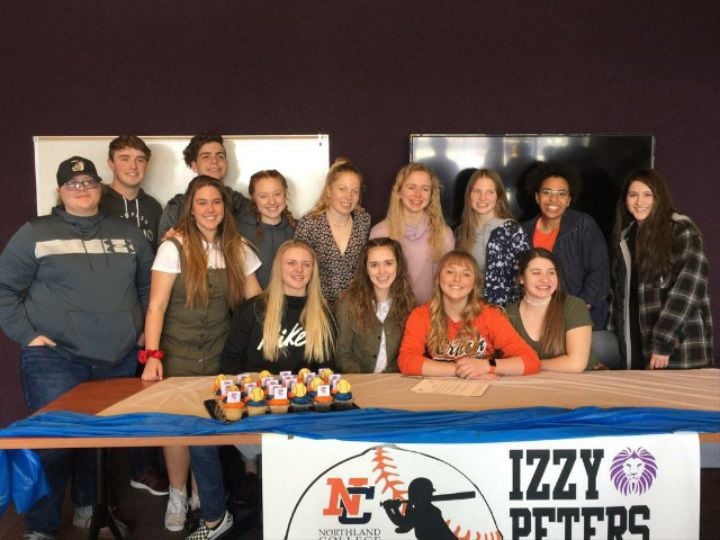 Elizabeth Peters takes a photo with her classmates and friends Thursday at Compass Academy after signing her letter of intent to play softball for Northland College (Wis.).

Joined by her parents and sister, Elizabeth Peters holds her signed letter of intent Thursday at Compass Academy.

Elizabeth Peters takes a photo with her classmates and friends Thursday at Compass Academy after signing her letter of intent to play softball for Northland College (Wis.).

Elizabeth “Izzy” Peters took the next step in her academic and athletic careers Thursday and made some history in the process.

Upon signing her letter of intent with Northland College (Wis.) softball, she became the first female Compass Academy student to extend her athletic career at the collegiate level. The school, which opened in fall 2012 in District 91 and emphasizes project-based learning and the use of technology, has had numerous students play sports for Idaho Falls or Skyline. Since its first graduating class in 2015, a handful of male students have signed letters of intent with colleges for football, baseball and soccer.

Peters, who plays softball for Skyline, said Thursday that she did not know she was the first female Compass student to sign, but expressed gratitude and humility for being the first. She has always wanted to play college softball.

“I just think it’s a really good thing for girls coming up to see that it can happen,” Peters said. “I’m really grateful for all the opportunities I’ve been presented with.”

Peters, who started playing softball at age eight upon watching other girls play, was recruited as a catcher, the position she has played her entire school and club career. She has spent her offseasons the last three years with Idaho Crush, a Boise-based club team. Her Crush coaches helped put her in touch with recruiters from Northland, a private liberal arts NCAA Division III school in Ashland, Wis., on the southwestern end of Lake Superior. She has not yet visited campus, but will before she graduates.

Playing for Idaho Crush not only helped with recruiting, but has allowed her to travel to multiple states and to play with and against athletes she otherwise would not get to see.

“It has made me more mentally strong, not only for softball but for life,” Peters said.

She was also recruited by Treasure Valley Community College in Ontario, Ore., and other Washington and Oregon schools, but chose Northland due to its emphasis on environmental sciences. She plans to study geology.

Living in eastern Idaho has also prepared her for Wisconsin winters. She said Northland softball plays multiple games out of state to begin the season, much like District 6 baseball and softball teams traveling to warmer areas in early spring.

A Post Register second team all-area selection and a 5A/4A High County Conference honorable mention selection last season, Peters is entering her second and final season playing for her dad, Skyline head softball coach Brad Peters. She signed her letter of intent sitting between her parents and her sister.

“It’s really been nice to end my childhood career with my dad as my coach,” Peters said. “He’s always there to support me and push me when I can’t push myself.”