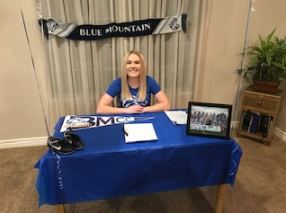 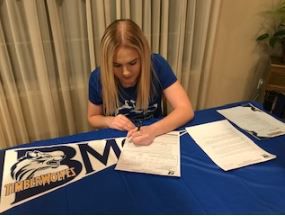 Kaysha Sadovich will be trading her Shelley red and black for Blue Mountain Community College blue and white in the fall.

The Shelley senior signed her national letter of intent with Blue Mountain's women's soccer program Wednesday evening at home before family members, teammates, friends and coaches. The Timberwolves recruited as a left wing, the position she played for Shelley, and she is to report to campus by July 27.

She has visited the Northwest Athletic Conference school in Pendleton, Ore., twice since November, touring the campus, becoming familiar with the team and getting to watch a game. It didn't take long for her to make her decision about playing there.

"When I went on my trip there I just liked the feeling and the people and the place," Sadovich said Wednesday by phone after her signing festivities. "It felt like a good fit for me. Once I finally came down and decided on my school, I felt pretty confident in my choice."

Sadovich, who played in her first game at age four, said college soccer has always been her dream. She was a varsity starter all four years and was a captain this past fall for Shelley, which won 3A District 6 titles and reached the 3A state tournament her freshman and sophomore years and tied a program-best finish with a state runner-up trophy her sophomore season. She joins Jasmin Vega, Brie Stumbo and Emma Stohl as Shelley athletes to sign with a college women's soccer program.

"I’m really grateful for this opportunity," Sadovich said. "A lot of it was from my coaches pushing me and my dad helping me with staying motivated and putting in the extra work every day."

Shelley head coach Jim Gregory, who described Sadovich as a 'super committed hard worker' and a leader on and off the field, said he expects more success for Sadovich at the college level.

"She’s a motivator both for herself and other players," Gregory said Wednesday by phone. "She doesn't sit back and relax. She's continually striving for improvement. That motivation, other players see that and it motivates them too. They see how hard she’s working and how much she’s pushing herself."

Sadovich spends her offseasons playing with Fusion FC, which has produced numerous college players from District 6 in recent years, and she will experience a full circle moment in about a month when they play in St. George, Utah.

"I used to live in St. George," Sadovich said. "The field we're playing on in St. George used to be a little kids complex. My first game ever I played was on that field."

Sadovich said she intends to continue her career after her two years at Blue Mountain Community College have ended. She has her eye on playing for Eastern Oregon University, an NAIA school in La Grande, Ore., which also recruited her and has been in touch with her.

"I’ve actually wanted to go there for a very long time, so I plan on going there," Sadovich said.

The senior added that she feels prepared for this next step in her career through the experiences she has gained from playing both high school and club soccer.

"I got cut from my old Fusion team," Sadovich said. "That’s when I realized I had to start working for it. I put in a lot of work coming into freshman year. I think I’m exactly where I need to be at this point."