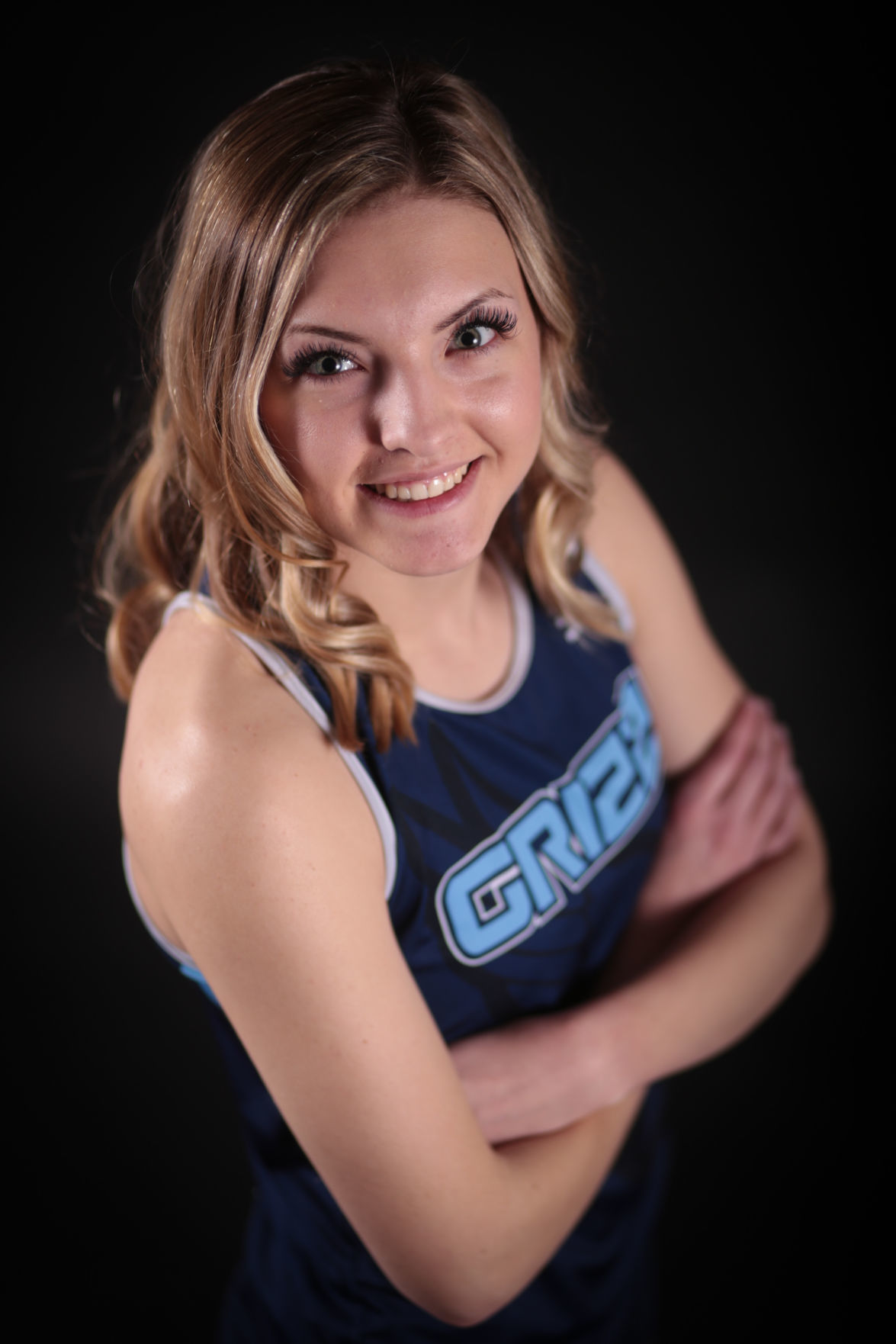 Skyline sprinter Hannah Fish poses for a photo on Tuesday. 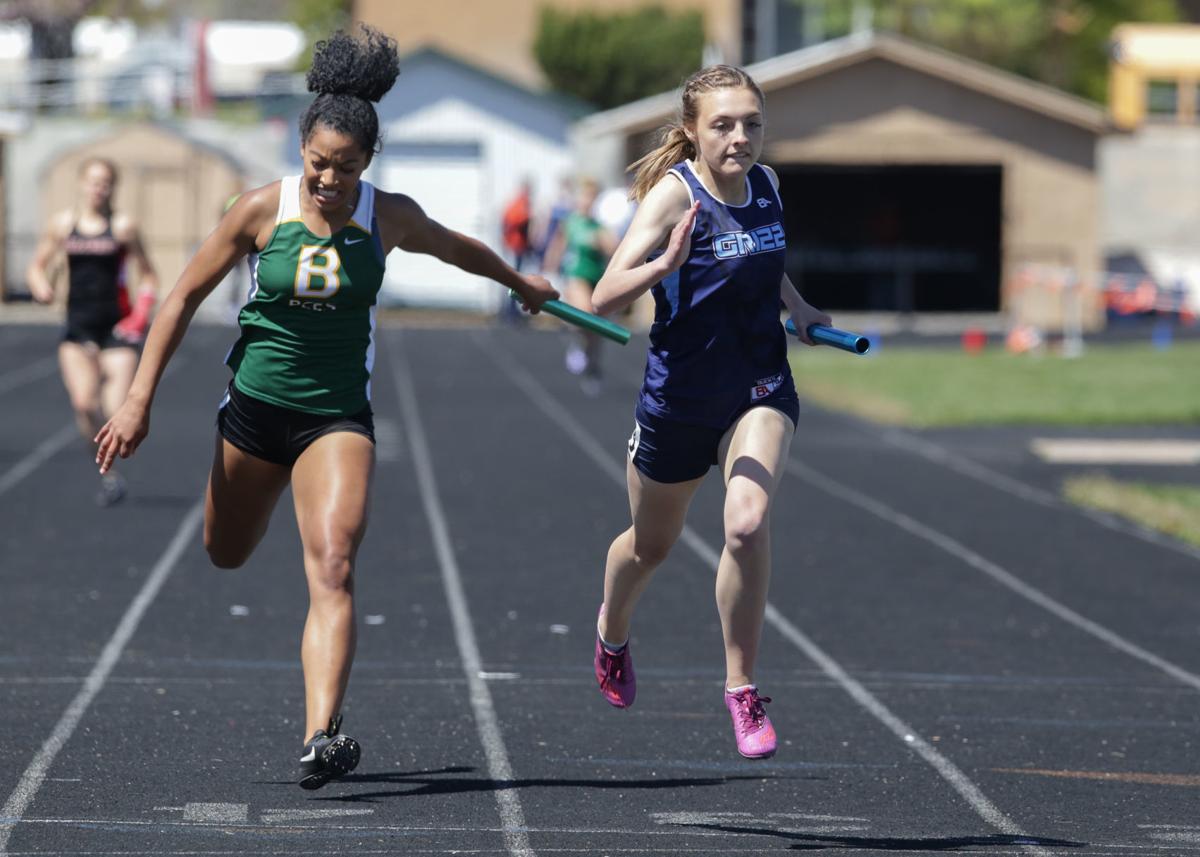 Skyline's Hannah Fish beats out Bonneville's Sade Williams in the girls 4x200 meter-relay finals last May during the 4A District 6 track championships at Ravsten Stadium.

Skyline sprinter Hannah Fish poses for a photo on Tuesday.

Skyline's Hannah Fish beats out Bonneville's Sade Williams in the girls 4x200 meter-relay finals last May during the 4A District 6 track championships at Ravsten Stadium.

From the moment she was introduced to track, Hannah Fish was drawn to sprints.

At Idaho Falls’ annual citywide sixth grade track meet which has been around since at least the early 1970s, Fish found success and a niche right away in the shortest events.

She did try the 800 once in seventh grade, and once was enough.

“I was like, ‘What is this long distance?’” Fish said with a laugh. “I am not a distance runner.”

Skyline head track coach Chase Meyer said she found her niche earlier than he did, adding that his one ‘knock’ on her is trying to get her to run the 400.

“It’s funny because I didn’t find my niche until my senior year when I started hurdling,” Meyer said. “She came in and wanted to run the 100 and 200. Her confidence in herself never wavered with that.”

Her speed has been showcased upon competing in the 100, 200 and all four relays since arriving at Skyline. She currently has personal bests of 12.46 in the 100 (outdoors), 26.98 in the 200 (outdoors) and anchored Skyline to a school record time of 1:44.27 in the 4x200 to win gold at last year’s 4A District 6 championships. She also received an offer from a Division I school, Montana State.

And she has accomplished all these things without ever competing in a final at state track.

Through injuries and now the suspension of the high school track season due to the coronavirus, Fish has proven resilient.

As a sophomore, she had to withdraw from the 4A girls 100 finals after an injury worsened in state prelims. Last year, she qualified for the 4A state meet in the medley relay, 4x200 and the 100, but was unable to compete due to breaking her foot in the 100 finals of the 4A District 6 championships.

After two consecutive seasons with unfortunate endings, Fish said she is more driven than she was before the injuries.

“I think I’m more determined,” Fish said. “I work harder. I put a lot of time into working just to stay healthy.”

Two years ago, a practice the week after the 4A District 6 championships provided the first indication that something was off. The pain in her leg did not subside at the 4A state meet, and she withdrew from the meet after running 13.79 in the 100 prelims.

That prompted the Grizzlies to alter their entries because Fish was also a member of the medley relay team.

“When she was running in prelims, you could tell she wasn’t herself,” Meyer said. “You could just see it. That’s when I had to make the really tough decision that night to put Macy Olson in the medley relay.”

The Grizzlies went on to place third in a school record 1:49.38, and Fish supported her teammates for the duration of the meet. She later learned that she had attempted to compete with a stress fracture.

In the fall, she tried to play soccer, but it became apparent that she wasn’t completely healed. She backed off, and entered her junior track season 100 percent recovered.

She edged out Bonneville 4x200 anchor runner Sade Williams for the win by 35 hundredths of a second.

“I got the baton and I was like, ‘I’m just gonna go,’” Fish said. “I could feel Sade coming up on me. I just kept pushing. When they announced we got the school record, I was shocked. Oh my gosh, it was so cool.”

Next up was the 100 finals, which ended in an epic finish between her, Williams and eventual 4A state 100 and 200 champion Laurel Taylor of Idaho Falls. Taylor won in 12.45, Fish took second in 12.46 and Williams was third in 12.48. Fish hit the track hard upon tumbling over herself at the finish trying to catch Taylor.

“Once I was going, I was like, ‘I’m up with these girls. Laurel’s right there,’” Fish said. “I leaned a little toward the end. I leaned too much and I lost my balance and tried to catch myself.”

Fish felt pain upon hitting the track, but standing and trying to walk prompted further concern.

“I went to the trainer and I was in so much pain,” Fish said. “Honestly, I was more worried about not being able to run.”

She eventually told Meyer that she couldn’t continue the meet. Meyer went from being worried when she fell to being hopeful when she got to her feet, to worried again when she saw her hobbling while trying to walk.

“She put everything into that race, gave Laurel everything she had,” Meyer said. “Even before she said she couldn’t do it, she was running on it and trying to. The desire was there and we had to say no.”

Less than 24 hours later, she had that foot X-rayed and received the phone call with the diagnosis. Her foot was broken.

“My dad answered it,” Fish said. “I could tell by the look on his face that it was not good news.”

For the second year in a row, Meyer reshuffled Skyline’s entries for the state meet while adhering to the four event limit per individual athlete. Fish made the trip to Boise and took photos with Skyline’s runner-up trophy, the first state track trophy for the Grizz girls since 2006, before beginning a lengthy recovery process for the second consecutive year.

She opted to swim and do core exercises since she couldn’t put any weight on her foot for six weeks. She also became proactive in pursuing college track opportunities.

Soon after completing an online questionnaire for Montana State, she heard back and was invited on an official visit in December. The offer followed, and she signed January 20.

Fish said her injuries were never brought up, nor was the fact that she has never competed in a state final, and it was more than sports that drew Montana State to her.

“One of the things he talked about was how I have really good grades,” Fish said. “He said kids who do well in the classroom do well on the track.”

Meyer, who provided guidance during the recruiting process, said Fish also spoke with Idaho State. Ultimately, Montana State’s coaching philosophies won her over. Meyer also reminded her to choose a school that would be a good fit beyond track.

“She was really impressed with Montana State’s coach and his philosophy of developing athletes,” Meyer said. “She liked that idea that she was gonna be coached more. I have to imagine that they went and looked at her times and saw how over the course of the season she was consistently improving.”

She completed recovery in time to compete in five indoor meets this winter in Utah and Idaho, noticing a difference in her speed due to the strength training regimen she began at Anytime Fitness her sophomore year. She began the outdoor season March 12 with a 12.84 to win the 100 at the Canyon Ridge quad.

Meyer said she is not only physically stronger than two years ago, but more confident.

“She just looks more solid and durable,” Meyer said. “She has come back more confident in her abilities than ever. Even last week, she looked more confident even in the way she carried herself walking around. She looked so much stronger in her stride.”

Training will look considerably different for the near future. The Idaho High School Activities Association made the decision Monday to suspend spring sports through April 5 due to coronavirus concerns. During the suspension, competitions will not take place and IHSAA member school athletes and coaches are not allowed to have meetings, conduct practices or use school facilities. Meyer said he is grateful to assistant coach Stefanie Reed for creating Facebook and Instagram pages for Skyline track at the start of the season, which are now where daily workouts are being posted for athletes. The coaches are also using Remind101, a messaging app for teachers to communicate with parents and students.

Fish said she anticipates having to be more creative with how she trains once public gyms start closing. As a senior, she also checks in with teammates.

“I think the part I’ll miss is I love to have someone to push me,” Fish said. “I’m going to have to push myself.”

“My (Montana State) roommate, I’ve been talking to her,” Fish said. “She’s in Helena and her track season got canceled. I don’t want to think about it.”

Meyer, too, said the unknown is the toughest part of the current reality, adding that Fish is part of small group of senior girls who continue to embrace leadership responsibilities.

“I also think in a lot of ways sports is beautiful for this because it teaches kids how to deal with adversity and how to handle disappointment,” Meyer said. “It’s been awesome to see this senior group of girls we have...they’re a small group but they really do a great job of stepping up. In the case for Hannah, she’s so much stronger for what she’s gone through.”

Fish said she plans to enter the medical field after college and continue to run and stay in shape as an adult. She is inspired by assistant coach Dale Guilford, a longtime presence at Skyline, who leads the track athletes in ab exercises.

“He does some of the exercises better than me,” Fish said with a laugh.

Fish added that the last two years taught her to keep going, which is applicable to track as well as life.

“In school and later in life when I get a job, I can know that I can keep pushing. Keep coming back and get through it,” Fish said.