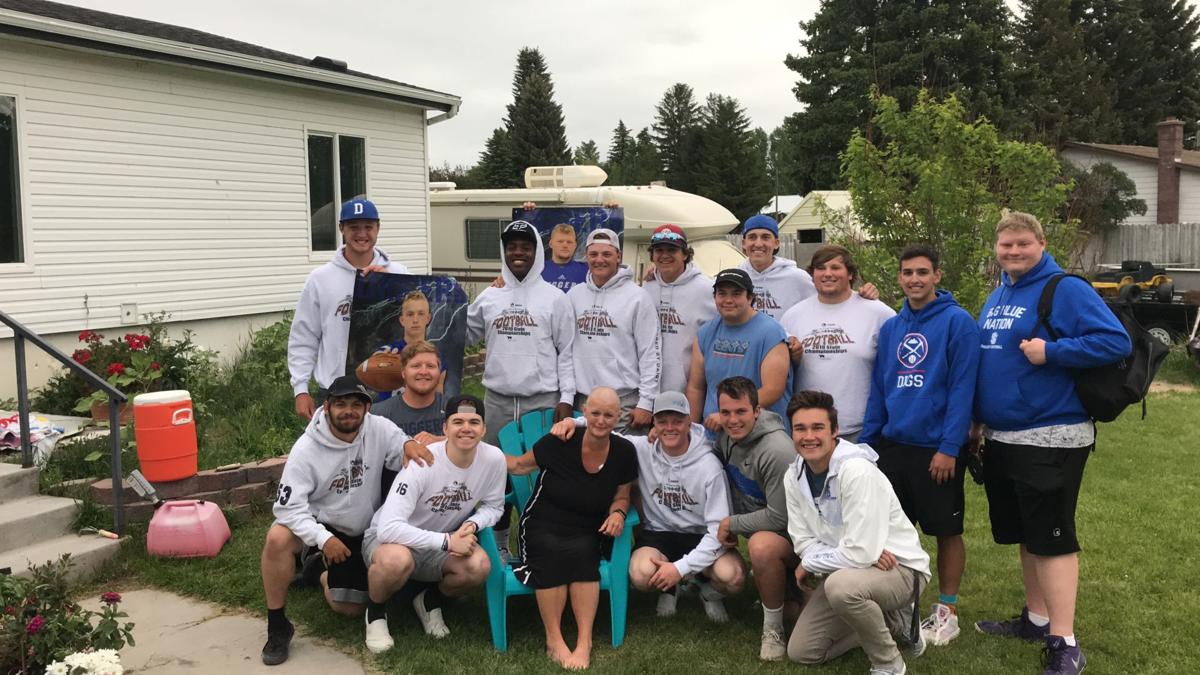 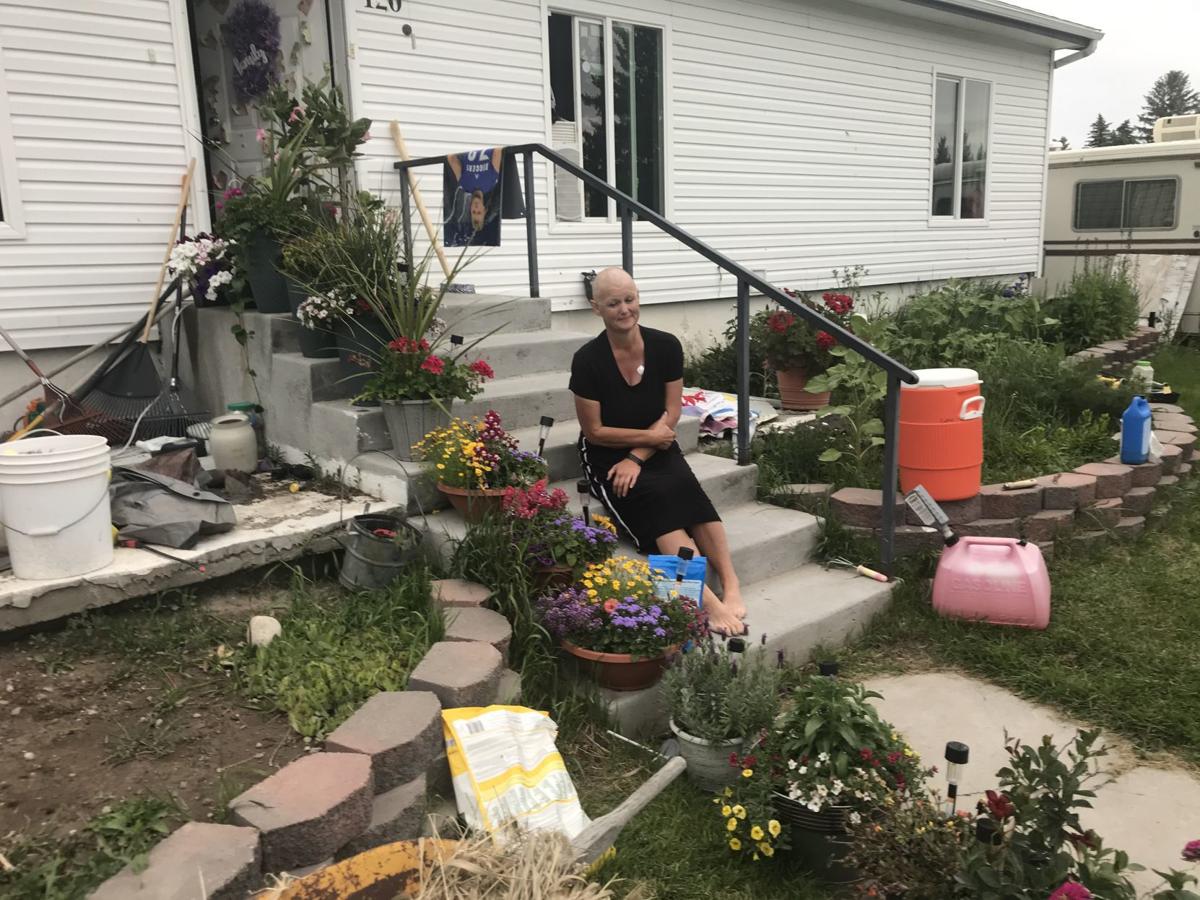 Carnations and quarterbacks. Daffodils and defensive ends. Lilies and linebackers.

Flowers may not be the typical way for football players to express themselves, but it’s been the Sugar-Salem football team’s language of love over the past couple of weeks as they delivered floral gifts to a teammate's mother.

Kim Copley, the mother of recently graduated and college committed linemen Kenny Copley, is also Sugar-Salem’s yearbook, graphic design and keyboarding teacher who handles all things photo-related for the school.

During spring break Copley noticed her eyes and skin were turning yellow and she quickly went in for medical attention. Because it was early in the COVID-19 shutdown she was able to get tested.

The next day, the doctor called Copley with devastating news; she was told she had pancreatic cancer, one of the more serious varieties of cancer. Days later, Copley met with an oncologist who told her she would be lucky to make it to her younger son Axel’s graduation in two years, she said.

Over the next couple of days, Copley, her family and friends prayed constantly.

Two days later, Copley went in for another biopsy that found the pancreatic cancer was contained and that the rest of the cancer was lymphoma, a less aggressive form of cancer.

“When I met the PA again, the oncologist told me in 17 years, he’s never seen someone with two kinds of cancer at the same time,” Copley said. “They can cure the lymphoma and they’re hoping that in the process, it shrinks the pancreatic tumor to the point that they can go in and do surgery after chemo’s done.”

Copley described the turn of events as a prayer-produced miracle.

When Kenny’s teammate, Sam Parkinson found out about Kim getting cancer he knew he had to do something so he started talking with his own mother, Michelle Parkinson.

Later Parkinson mentioned to his mother that Kenny loves flowers.

“We like to call Kenny Ferdinand the bull because he has his own flower garden and he likes to take care of his own flowers,” Parkinson said. “He’s a big strong football player but he’s so soft at heart. I was just saying that it’s funny that Kenny has a flower garden and my mom was like, 'Oh we should get as many football players as we can and just cover their whole front porch with flowers to lighten the mood with all these bright vibrant colors to add a little bit of color to such a sad thing.'”

Michelle Parkinson and son proved a powerful team. Michelle formed a group chat with as many senior football player mothers as she could find and Sam started recruiting the players who would deliver the flowers.

Sam delivered the first flower in late May and every night since a player has delivered at least one set of flowers.

“When we got the first one, it was like, cool, somebody brought us a thing of flowers," Copley said. “Then as it continued night after night, it was like, ‘Wow, who’s doing this? We thought after the first couple that it might just be one person but after they brought more and we were like, 'It’s got to be a group of people.' We didn’t really know what to think. My daughter would sit at the window and try to catch who it was late at night. It was just very humbling to know that somebody was doing this for us.”

The team earned the name the Flower Bandits for its criminal-like stealth and agility.

“It was cool, they were trying to hide and trying to get away from being seen because they wanted it to be a surprise,” said Parkinson’s father, Brad.

The players’ delivered their final bouquet of flowers Monday night. Kenny’s fellow lineman Caleb Maughn knocked on the door as the rest of the Bandits snuck onto the Copley’s yard in Teton. When Copley opened the door with her husband, the Digger graduates sang their fight song.

“When they showed up the other night it just took my breath away,” Kim said. “I just felt really humbled and grateful and so grateful that we have been a part of this group. I just think they’re a great bunch of guys and I’m so glad that my son is part of them and has them as football brothers because they’ve done so much for him. I can’t even believe that young kids today would do something like this. They’re amazing.”

“Out of all the times I sang that song, that meant the most,” Sam said.

Copley then went around and gave each of the boys a hug, a physical manifestation of what these boys have meant to her family.

“They’ve played together since fourth grade and I’ve watched them all those years,” Copley said. “They’ve just been a really special band of brothers for each other. They’ve been there for each other and they’re just a special group.”

The Copleys share a special bond with the football team.

“In a way she’s like our mom,” Parkinson said. “She shows a lot of tough love but I know it’s all out of pure sweetness and her being herself. She has to deal with us getting ready for our pictures and taking our pictures. She just means so much to us.”