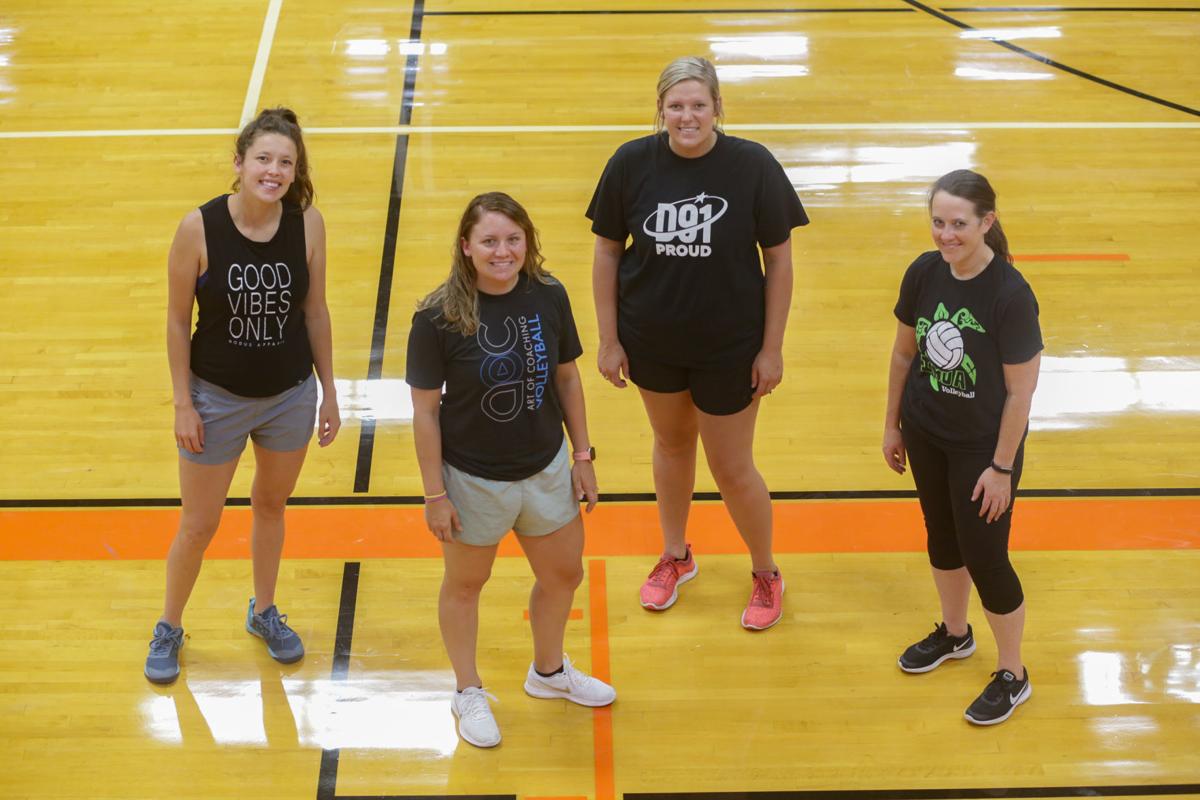 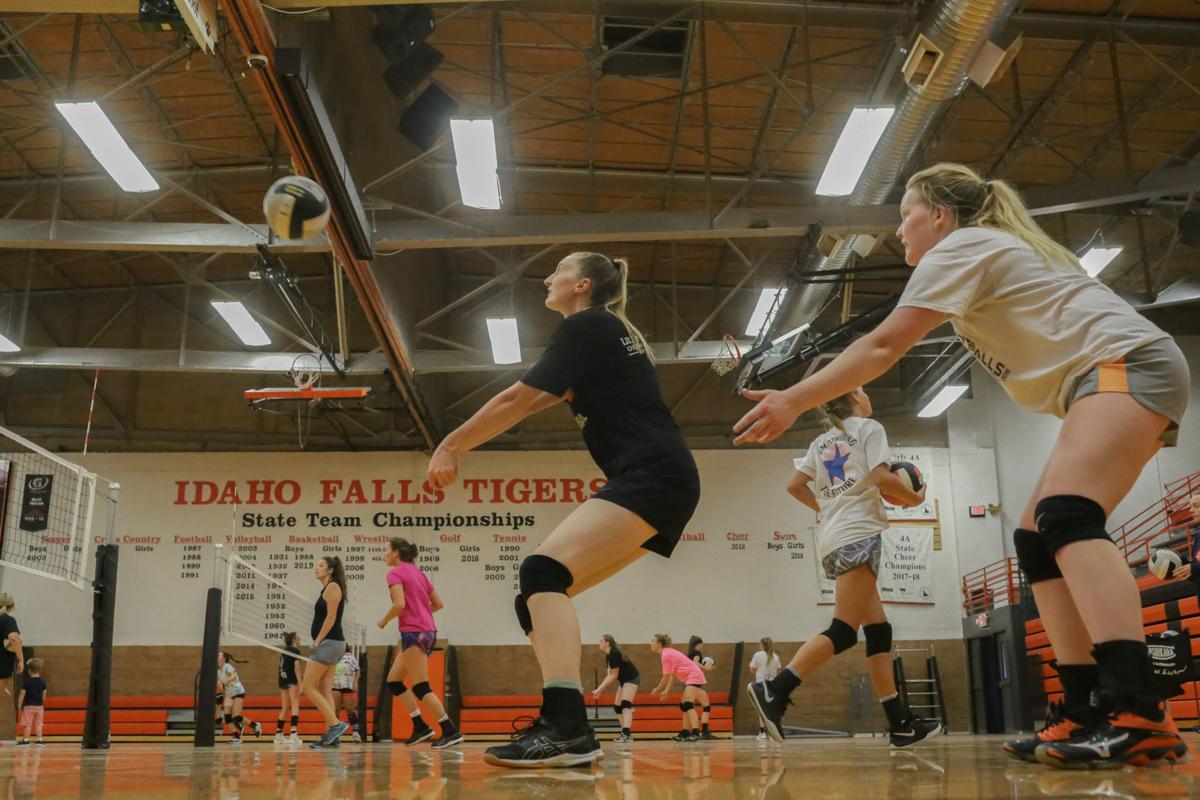 Varsity player Sage Berrett, in black, participates in a drill during volleyball practice at Idaho Falls High School on Aug. 15. 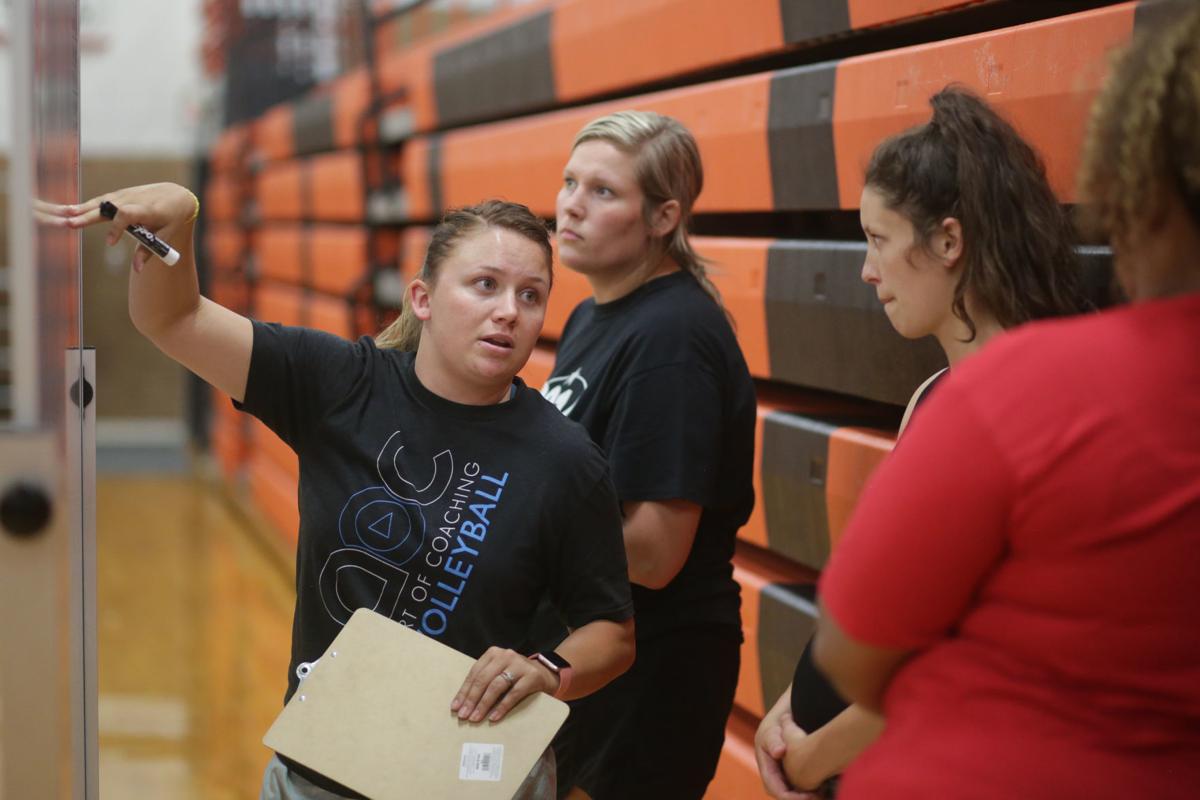 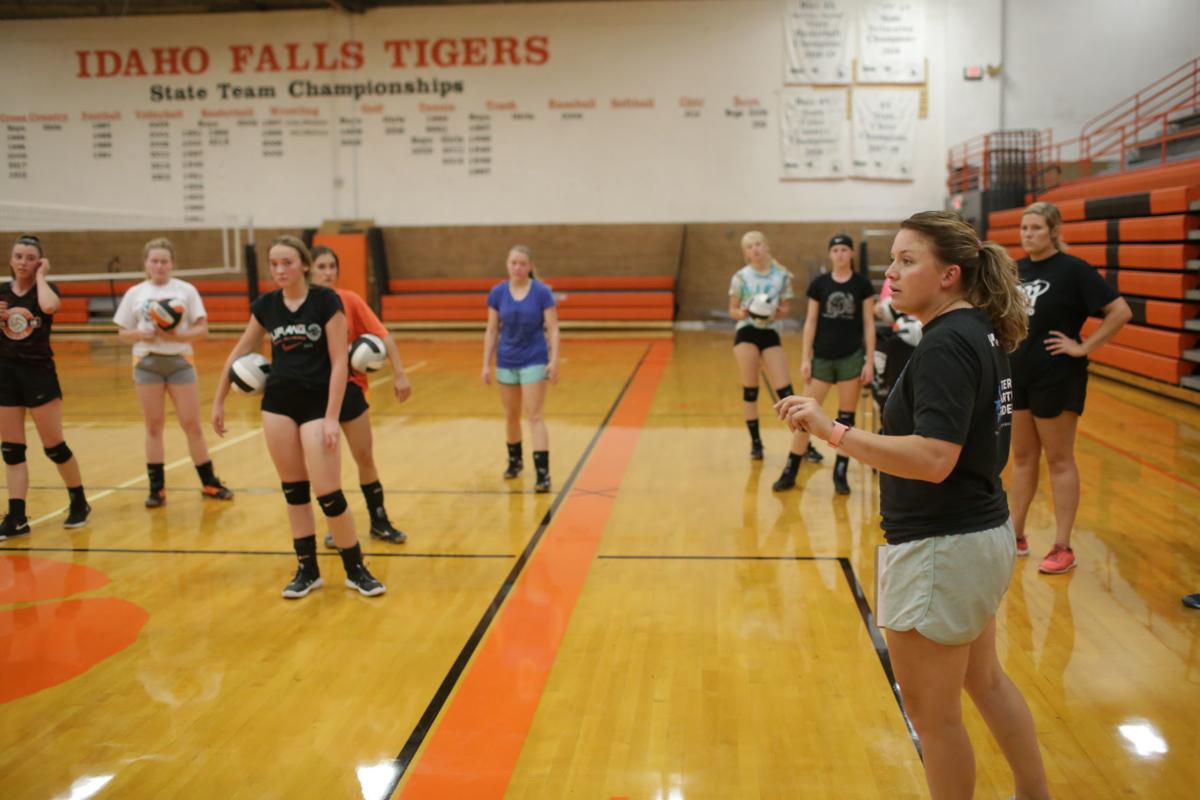 Varsity player Sage Berrett, in black, participates in a drill during volleyball practice at Idaho Falls High School on Aug. 15.

Their earliest memories of the Idaho Falls High School gym are lighthearted, to say the least, for sisters Kaitlyn Zarpentine and Kiarra Johnson.

While she doesn’t remember how old she was, Zarpentine knows she was in the office in the northwest corner of the gym with Johnson, who is two years younger, while their mother Wendy Johnson was directing Idaho Falls varsity volleyball practice.

“I was hitting volleyballs against the wall with Kiarra,” said Zarpentine, a 2012 Idaho Falls graduate who played three seasons for Wyoming before concluding her collegiate career at Idaho State. “We were definitely gym rats.”

Varsity assistant coach and 2014 graduate Johnson might have a more humorous memory than Zarpentine.

“Probably getting hit in the head with a ball,” Johnson said, laughing.

Nearly two decades later, the sisters are not only back in that gym, but as coaches of the program they played for and with a staff consisting entirely of other Idaho Falls alumnus. They are joined by Kathy Kalougata (class of 2011), Jessica Marboe (class of 2012) and Jena Wahlquist, an I.F. graduate, an All Region 18 First-Team selection at College of Southern Idaho in 1990 and Eastern Idaho Volleyball Association’s director.

Zarpentine spent the previous three seasons on the Century, Madison and South Fremont coaching staffs, respectively, and is in her second year teaching at South Fremont. Zarpentine said she was aware of the inevitable chatter among the volleyball community that might begin if she were to apply for the vacant I.F. varsity head coaching position and be hired, including putting her name in the same sentence as her mom, who won six state titles in 16 years at I.F. before retiring after the 2016 season. She discussed the opportunity with Wendy, who encouraged Zarpentine to go for it. Hillcrest athletic director since 2017, Wendy did josh her oldest daughter a bit when she was announced as head coach in January.

“Now I can tell my mom it’s my gym, not hers. Then she said, ‘It’s not your gym until you have more years on the wall than me,’” Zarpentine said with a laugh, gesturing to the gym’s east wall painted with state championship years by sport.

Zarpentine didn’t have to look far to complete her coaching staff. Varsity assistant coach Kalougata, who played for BYU Hawaii, is a working mom with multiple jobs and said she wouldn’t commit to coach for just anyone. When Zarpentine asked, however, Kalougata ‘had to take it’ and she is amazed at how her former teammate is embracing being head coach.

“It’s like she has the mind of a 40 year-old,” Kalougata said. “At our (district) coaches meeting, she killed it. She is so confident. I thought coaching would be boring. It’s been a lot of energy, a lot of time, but it’s been so fun.”

JV head coach Marboe, who teaches at Fox Hollow Elementary in District 91, vividly remembers her last time in I.F.’s gym as an athlete: crying while watching the clock run down during her last basketball game. She is not only grateful to return to that gym, but as a coach alongside former teammates who share her passion for I.F.

“It feels great to be back in this old, beautiful gym,” Marboe said. “I feel super blessed and lucky.”

Zarpentine and Johnson fought a lot in high school, but the sisters said adulthood has matured them and they complement each other well. While Zarpentine possesses Wendy’s love of the technical side of volleyball, she said Johnson matches--if not surpasses--their mother’s vocal energy. Like Marboe and Kalougata, Zarpentine and Johnson played for Wendy. They pair what their mother taught them with perspectives gained from their own coaching backgrounds, although Johnson said she prefers to be called ‘Coach Ki’ instead of ‘Coach Johnson’ since that was Wendy’s title. Both played in college, and they often find themselves thinking the same thing.

“Even now in adult leagues, there’s no one else I’d rather play with than Kiarra,” Zarpentine said.

“She’s going to do such a good job because she has such great perspective and experience,” Johnson said.

Zarpentine, whose biggest influences are her mom and retired Century coach and current Idaho State athletic director Pauline Thiros, said her 18 year-old self could not have imagined being head coach of her alma mater. She realized after her collegiate career ended how much she loved volleyball, and she’s now surrounded by former I.F. players with whom she is instilling the belief of winning districts and returning to state into the current players.

While reality is not what she planned, Zarpentine said she loves seeing kids meet their goals.

“All throughout high school, I said I was never gonna teach or coach because that’s what my mom did. But I love it,” Zarpentine said. “I didn’t realize how much I missed this place.”

The Bobcats graduated two from last year's 39-5 5A District 6 and 5A state championship team and have four seniors this season.

The Bees graduated two from last year's 39-5 4A District 6 championship and 4A state runner-up team and include three four-year varsity players.

Graduated five from last year's 15-11 3A District 6 championship team which placed second at the 3A state tournament.

The Cougars graduated two from last year's 27-8 team which won its third consecutive 2A District 6 title and placed second at the 2A state tournament.

The Warriors, who placed third at last year's 1A Division II state tournament with no seniors, have been youth laden for a while but feature four seniors this year.

Lexi Weaver, Madison sr. libero: Praised for her relentlessness and fearlessness last season, Weaver recorded 534 digs and 41 aces and handled serve receive for much of the 5A state tournament last season.

Abigail Yadon, Watersprings sr. middle hitter: The multisport standout is back on the court for the Warriors after missing the entire 2018-19 school year recovering from surgery to repair tears from an injury during the 2018 track season.

Aug. 28: Hillcrest, Bonneville at Madison. Early season measuring stick between three of last year's top District 6 teams in 5A and 4A.

Sept. 5: Firth at Sugar-Salem. Defending state runners-up in 2A and 3A, the teams split regular season meetings last year.

Sept. 10: Idaho Falls at Bonneville. An always intense match between two eastern Idaho powerhouses, this is the second year the outcome will count toward district records.