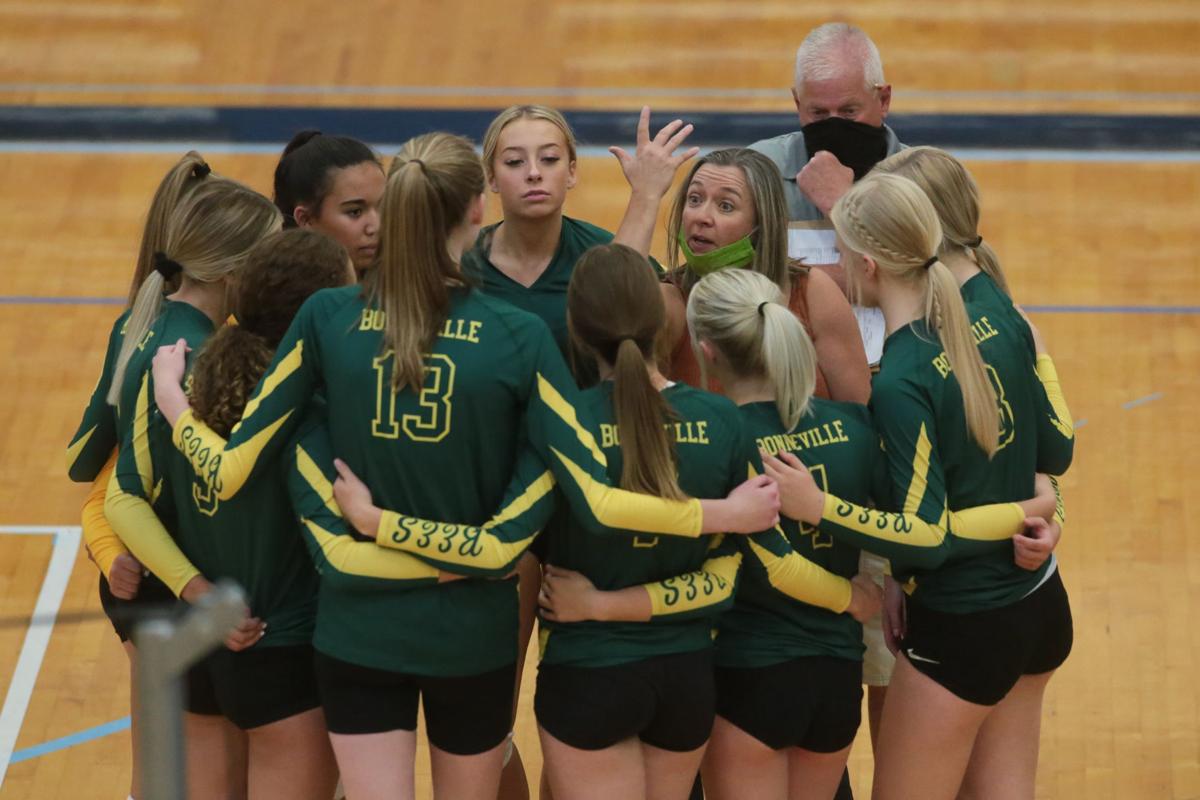 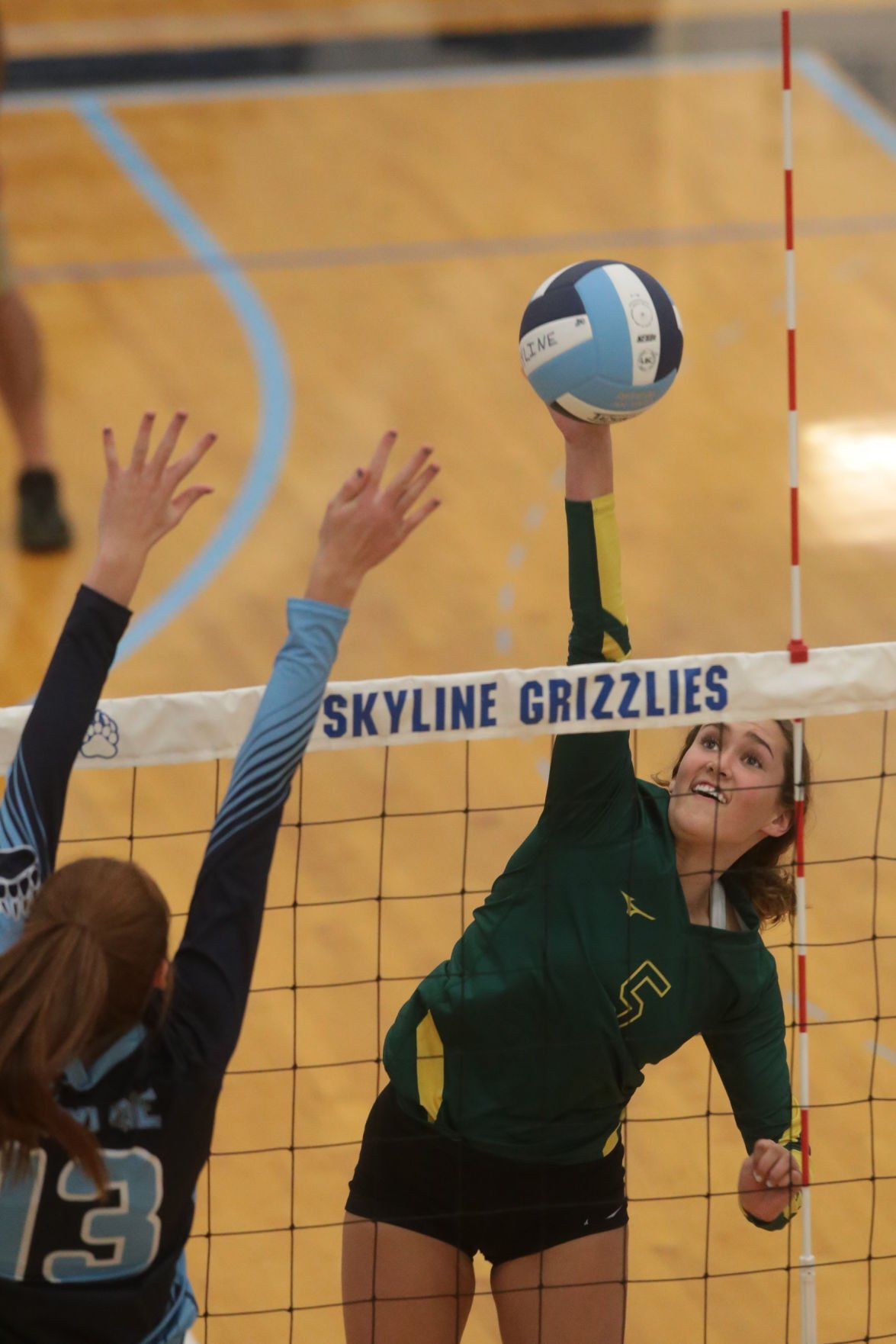 Few voices rang throughout an otherwise empty gym. The limited number of fans in attendance to watch Bonneville sweep Skyline Thursday night had exited some 30 minutes prior. One of the only people left was Bonneville coach Chantal McMurtrey, who took a seat at the end of a Skyline bleacher, reflecting on her Bees’ 14th win of the year — against one loss.

For a vaunted program, that record isn’t new, but this year’s team is. Bonneville features just one senior on its roster, opposite hitter Mariah Jardine, who is helping this season’s team replicate the success of the last five. Since 2015, Bonneville has won three state championships and had two runners-up finishes.

In fact, since McMurtrey became Bonneville’s head coach in 2006, she’s led the Bees to five state titles. She has missed the state tournament just twice.

In that time, the Bees have boasted celebrated seniors who have gone on to play at the college level, including at Idaho State, Eastern Oregon and Providence (Montana). Success runs in the water at Bonneville.

“We just had those kinds of leaders,” McMurtrey said, “and kids that were like, ‘I’m going to rip your throat out if you don’t start playing hard.’”

The Bees return little of that experience this year. In 2020, could Bonneville really maintain success following the departure of a decorated class of five seniors? McMurtrey, coaching her 16th year at the program, said she felt doubted this offseason.

When was the last time she felt that way?

“That’s an interesting question,” McMurtrey said. “It’s been awhile. I’m not sure if I’ve ever felt doubted.”

Those responsible for the rumblings may be regretting their impudence.

Bonneville isn’t just off to a 14-1 start this year. The young Bees are blowing the doors off their opponents. They have yet to win a match playing the full five sets, dispatching foes in short order, accumulating a record that some around the area didn’t consider possible.

How Bonneville is doing so represents a testament to its coaching staff adjusting, an inexperienced roster developing quickly and everyone involved feeling motivated — hellbent — on upholding the standard built by those before them.

Jardine may be the only senior, but she’s started all four years, which means she’s played in three state tournaments. Junior outside hitter Mia Sorensen, whose sister Makayla was last year’s Gatorade Player of the Year in Idaho, returns two years of experience as well.

Beyond that, the team features virtually no veterans, but even those players have proven invaluable. Juniors Logan Faulkner, McKenzie Dickerson and Ryley Baker have been around the program. Sophomores Elisabeth Nelson and Ally McDaniel have come along nicely, and freshmen Kaylie Kofe and Aspen Anderson play valuable roles.

“And wow, are they carrying a big load for us,” McMurtrey said. “They don’t come off the floor. We knew those two were pretty far along, so we had the pieces there.”

Another way to explain just how in the world this team hasn’t missed a beat has to do with its players’ personalities. McMurtrey believes they come from a similar mold. They have heart. They want to win. They’ll do what that requires.

They aren’t world-class athletes, though.

“But you don’t have to have that. As long as you have a passion and refuse to lose,” McMurtrey said. “This game is so much about ball control, and you don’t need big, giant kids to have that. So that’s what’s cool about volleyball.”

Remember, though, these Bees are young. They don’t have every instinct, not yet at least.

That’s where Jardine comes in.

Seniority entails responsibility, but particularly when you’re the only one with it. For Jardine, that has meant simple things, like communication. Leading by example. Chatting with coaches about how to best operate.

“The older girls have to have more energy on the court, and we have to have bigger roles,” Sorensen said. “We have to talk more, we have to communicate more because we’re really young.”

Still, it’s impossible to complete the puzzle of this year’s Bonneville team without its coaching, namely McMurtrey and assistant Drew Johnson.

The consensus among the Bees is that McMurtrey is relaxed. Hers is an easygoing personality. She likes to tell jokes, Jardine said, which fosters better connections with players. They don’t have to worry about a screaming coach on the sideline.

“She’s so enthusiastic about everything,” said Faulkner, who added that McMurtrey isn’t afraid to occasionally accost players who make mistakes. “I like that she can be fun and serious.”

All that, McMurtrey said, is by design. If she yelled all the time, how could players know when she really meant it?

Besides, there’s a reason why she boasts the coaching record she does.

That she’s doing it with this roster, though, may represent its own accomplishment.