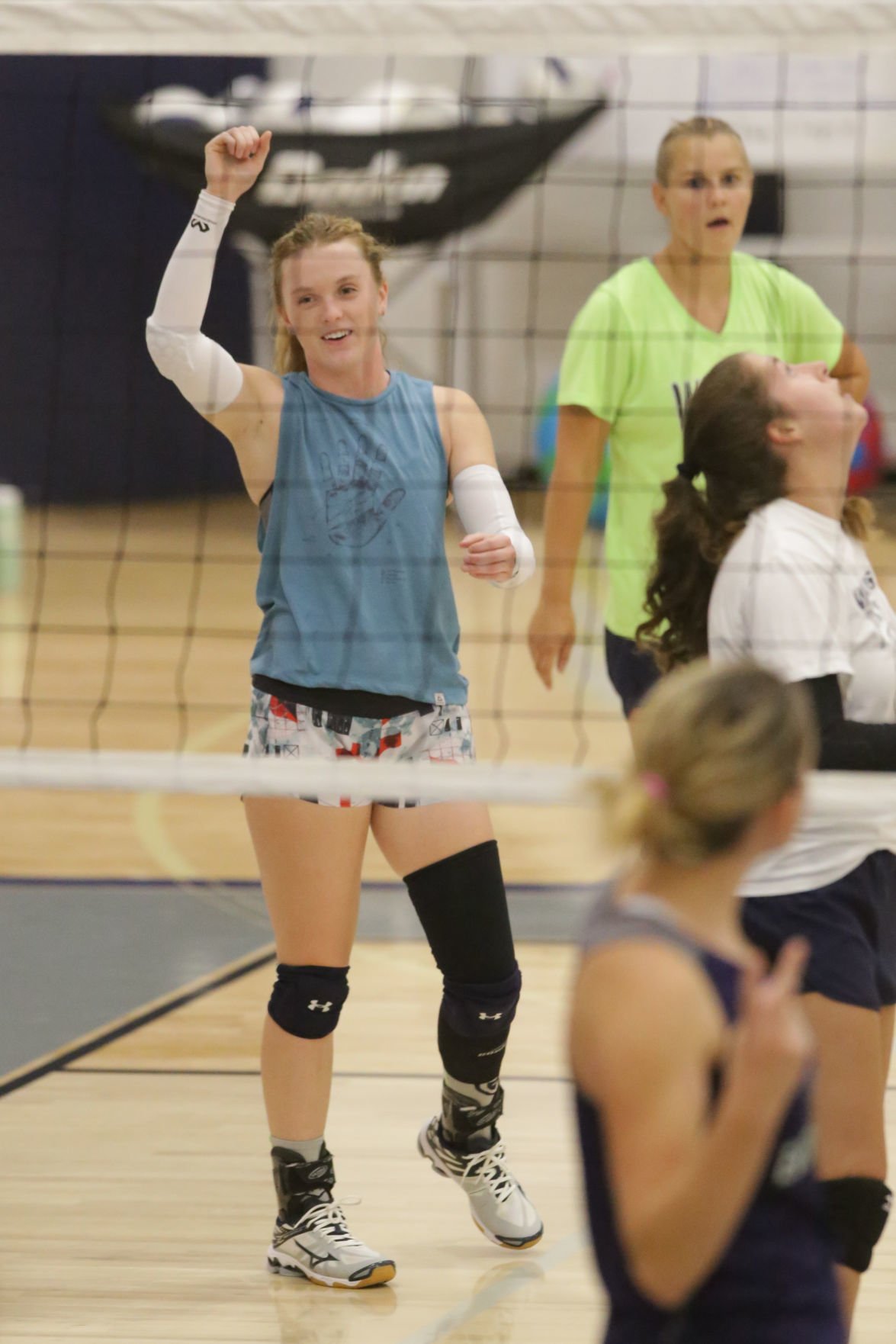 Abigail Yadon reacts during volleyball practice at Watersprings High School on Sept. 11. Yadon, a senior middle hitter, missed her entire junior year of high school sports due to multiple tears in her knee during her sophomore track season. 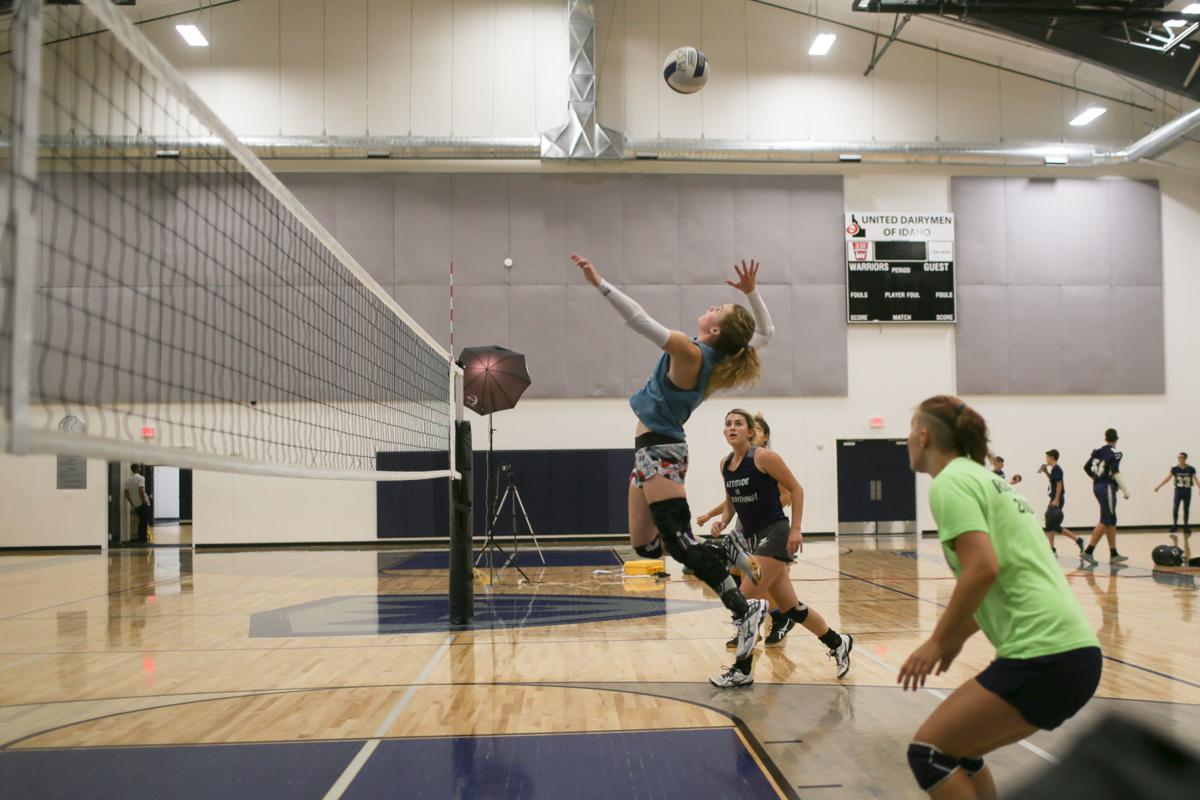 Abigail Yadon elevates to hit the ball during volleyball practice at Watersprings High School on Sept. 11. Yadon, a senior, missed her entire junior year of high school sports due to multiple tears in her knee during her sophomore track season. 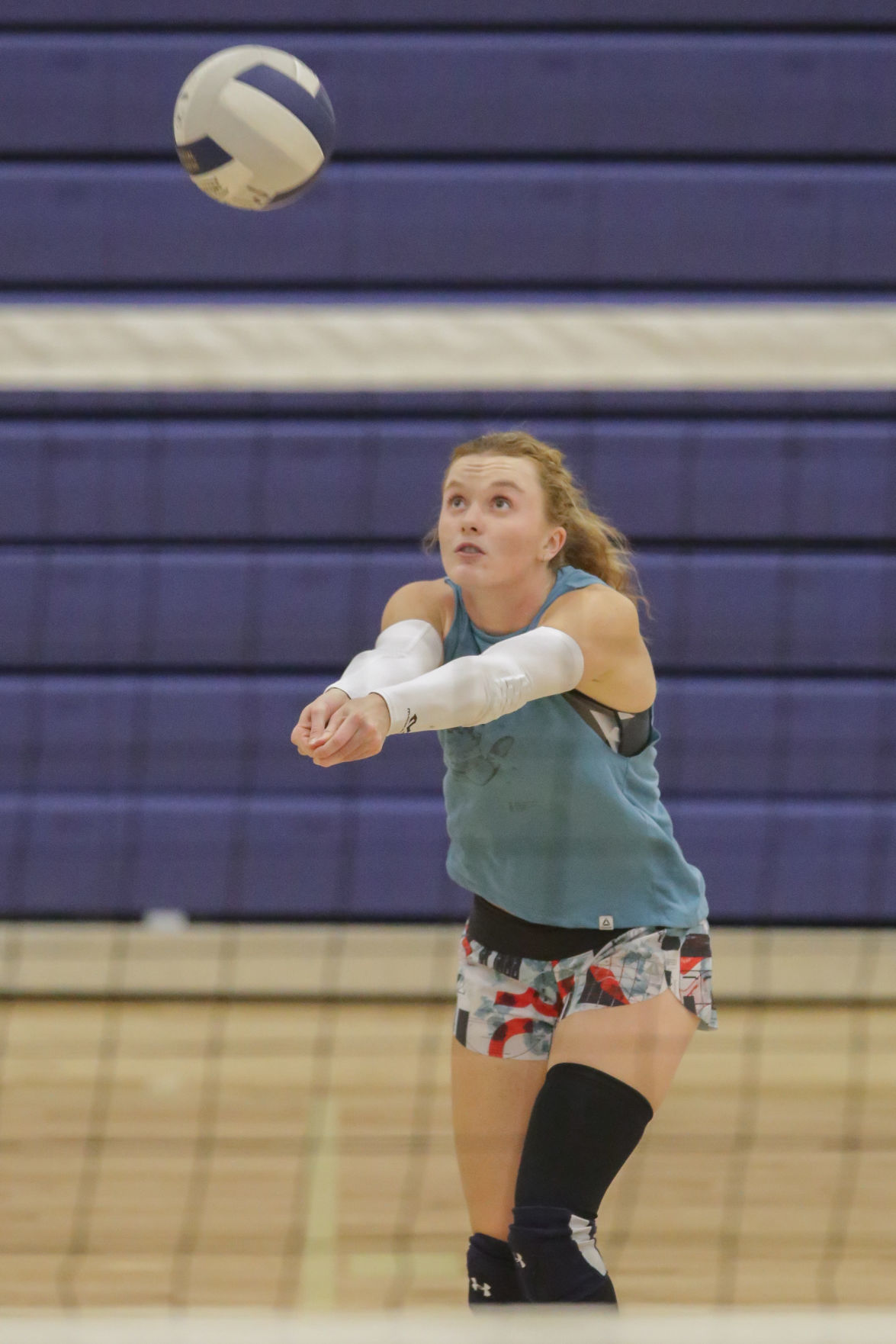 Abigail Yadon digs the ball duribg volleyball practice at Watersprings High School on Sept. 11. Yadon, a senior, missed her entire junior year of high school sports due to multiple tears in her knee during her sophomore track season.

Abigail Yadon reacts during volleyball practice at Watersprings High School on Sept. 11. Yadon, a senior middle hitter, missed her entire junior year of high school sports due to multiple tears in her knee during her sophomore track season.

Abigail Yadon elevates to hit the ball during volleyball practice at Watersprings High School on Sept. 11. Yadon, a senior, missed her entire junior year of high school sports due to multiple tears in her knee during her sophomore track season.

Abigail Yadon digs the ball duribg volleyball practice at Watersprings High School on Sept. 11. Yadon, a senior, missed her entire junior year of high school sports due to multiple tears in her knee during her sophomore track season.

Watersprings High School senior Abigail Yadon now wears a brace on her left leg that goes from her thigh to above her ankle, but in many ways she is the Abigail her volleyball teammates and coaches remember.

She still laughs and smiles with her teammates after a good play, she still impresses with how high she can jump for being 5-foot-6, and she can still hit hard enough to send a volleyball into the bleachers.

"She goes 110 percent all the time. She’s learned, though, that she has to pick and choose," Watersprings head coach Robyn King said. "There was a little bit of rust with passing (upon returning). From what she says, she feels very strong."

This is Abigail Yadon 2.0: returning to the Warriors after missing her entire junior year of sports with more muscle from hitting the weight room and new perspective from her recovery.

"This is the most fun I've ever had in a volleyball season," Yadon said. "I just want to be able to play through my senior year. Whatever comes my way will come."

This fall is Yadon's first time in a Warriors uniform since April 2018, when she tore her ACL and meniscus in her left leg while competing in long jump at a rainy track meet in Shelley. Yadon, who had missed part of the 2017-18 basketball season due to a strained MCL, soon learned the severity of her tears and made the difficult decision to sit out from sports her junior year.

"After my surgery, the doctor said it was the worst meniscus tear he’s ever seen," Yadon said. "I knew if I wanted to play my senior year I just had to wait it out and give my body a break."

She was on crutches for the next six weeks and went to physical therapy twice a week until early 2019. Watersprings, which entered the 2018 volleyball season as defending 1A Division II state champions, had to play without her. The Warriors went on to place third to claim state hardware for the third consecutive year.

King said the Warriors elevated their game in Yadon's absence.

"Everybody raised their level recognizing how much we relied on her," King said. "It matured the kids. It proved why we ended up having success without her."

Joanna Hayes, Yadon's friend and teammate since childhood and a fellow senior, was turned to for leadership in volleyball and basketball in Yadon's absence. While Hayes said she felt more pressure in their junior year of sports, she saw firsthand the Warriors' progress. Yadon's return is going to be amazing, Hayes said, and it has been so far.

"It was fun learning to play with these younger girls and seeing all of the growth," said Hayes, who is Watersprings' setter. "We knew we had to step up last year without her and had to figure out how to play without her. All of these girls have improved tremendously since last year. Abigail said it's like a different team."

Hayes still saw Yadon frequently, as Yadon did not miss a practice or a match during the 2018 volleyball season. She helped King keep stats on the bench, led from the sidelines and traveled with the team. She wanted to be involved as much as possible, but there were difficult moments while watching and knowing she couldn't play.

Hayes, who missed four weeks of her junior basketball season due to a concussion, said she couldn't imagine being out for as long as Yadon.

"When she came to practices and matches, she'd put on a strong front," Hayes said. "Being her friend, I'd talk to her after the match and she'd say it was hard to watch. I would try to include her as much as I could."

Yadon credited her parents and her faith for helping to lift her up during the most trying days of her recovery.

"I cried a lot just because I couldn't play," Yadon said. "You can't do anything about it. You have to sit and wait. (My parents) let me cry to them, kept encouraging me not to give up. God has definitely helped me in my trials. He put me through a trial in my life and now He's bringing me joy."

She tried to rejoin her Watersprings girls basketball teammates in January, but it was too soon. Now that her return is 'for real,' as Hayes puts it, she is one of four seniors on a currently undefeated team benefiting from her versatility.

College coaches took notice of her defensive skills during a camp at Utah Valley University over the summer, and King said it is hard to give Yadon an official position on their roster because of her skill set. As a freshman, Yadon hit a ball so hard and so far during a practice that it broke King's nose. As sophomores, Yadon and Hayes would set each other every other set of a match.

"I still love her even though she broke my nose as a freshman," King said. "She’s like a utility player. She can jump so high, she can hit off the block. One day she hit from right down the 10-foot line. No doubt she’s the best athlete I’ve had the opportunity to coach."

Yadon, King, and Hayes are all optimistic about the prospects of this season, especially with the 1A Division II volleyball state tournament returning to Lewiston where the Warriors won the 2017 state title. With everyone back from a 2018 team that had no seniors, King said this season is more about fine-tuning what the Warriors already know. Hayes is excited to already see the experience gained from last season being applied to this season.

"Every single game we play, don't be cocky, be confident, know we've done the work and keep focused on player progression," Hayes said.

Yadon said while she isn't ruling out playing sports in college, her bigger priority is staying healthy and enjoying her senior year. She added that she would give high school athletes looking at a long recovery from an injury the advice of staying the course.

"I'd say just be patient," Yadon said. "You'll get through this and it will be worth it in the end."