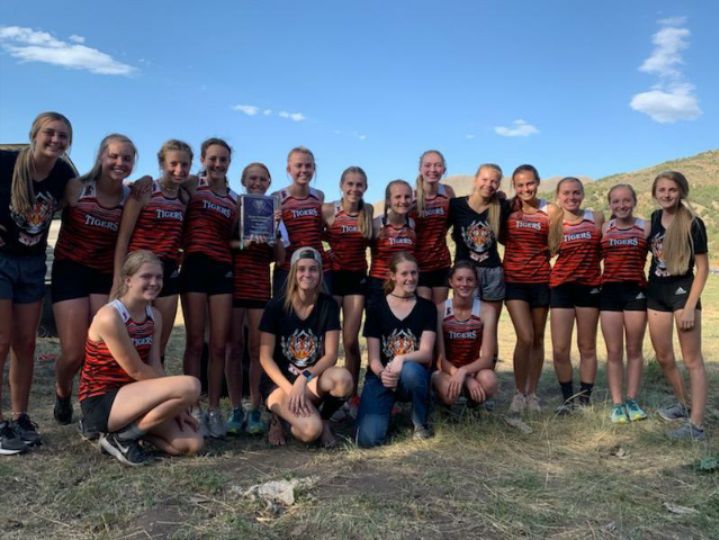 Members of the Idaho Falls High School varsity and JV girls cross-country teams are seen with the plaque they received after winning the Blake Stephens Invitational on Aug. 30 at the East Mink Creek Nordic Center in Pocatello. 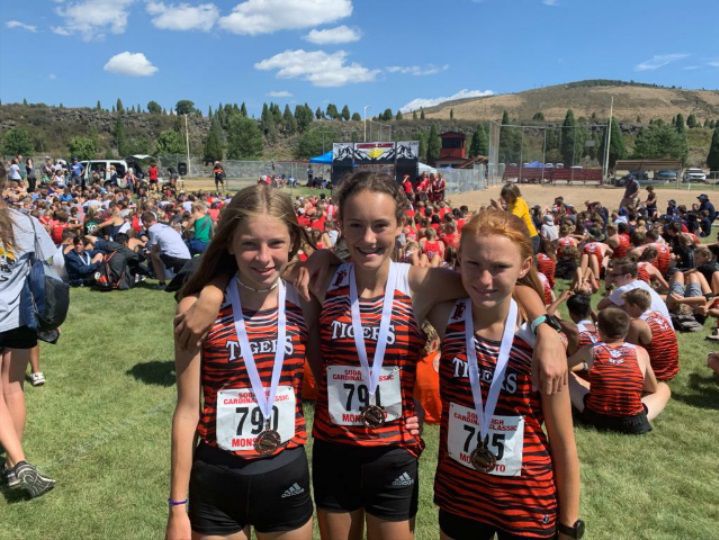 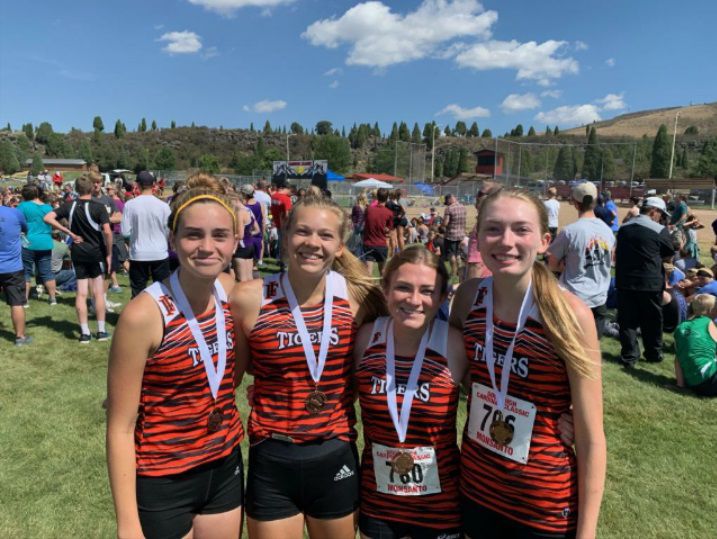 Members of the Idaho Falls High School varsity and JV girls cross-country teams are seen with the plaque they received after winning the Blake Stephens Invitational on Aug. 30 at the East Mink Creek Nordic Center in Pocatello.

While it is still early in the season, the Idaho Falls High School girls cross-country team has much to celebrate.

The Tigers won the Blake Stephens Invitational at East Mink Creek Nordic Center in Pocatello on Aug. 30 and followed that up by placing third in both the varsity girls and JV girls races behind nationally ranked teams Boise and Mountain View in last weekend’s annual Cardinal Classic in Soda Springs.

Previous seasons have prompted the building of excitement for this season. The Tigers placed fourth in 2016 (their first season in 4A), placed fifth in 2017 (15 points shy of a trophy) and fourth in 2018. This year’s team features seniors and three-year state qualifiers Emma Clarke and Madi Mary along with returning state qualifiers Jennalee Lewis (junior), Hannah Kohler (sophomore) and Abbey Corgatelli (sophomore) and an influx of freshmen who are contributing right away.

“We are excited about our depth,” Idaho Falls head coach Alan McMurtrey said following Saturday’s Cardinal Classic. “I’m grateful to coach this group. Practices have been a lot of fun this year.”

To further illustrate that depth, the varsity ranks have already fluctuated since the Cardinal Classic. Saturday’s JV race medalists Clarke, Corgatelli, Maren Archibald and Mary are now runners No. 5 through 8 on varsity, and the medalists from Saturday’s varsity race were a sophomore (Kohler) and two freshmen (Elanor Eddington and Allison Lemons).

Kohler and Corgatelli previously ran with Lemons and Eddington and knew what they would bring to the Tigers. So far, their predictions have proven accurate.

“In seventh grade, Allie and I beat each other every race,” Kohler said. “We’d always finish super close.”

“I ran with them both in middle school,” Corgatelli said. “We knew coming up this year, they’d be good and they’d add to our team and probably be varsity runners. It’s been fun to have them in practices and in races.”

Now first-year varsity runners, Lemons and Eddington shared how they are getting acclimated to running longer distances (middle school cross-country tops out at 3,200 meters), being among the youngest on the team and and reuniting with former middle school teammates.

“It’s been pretty awesome being back on the same team,” Lemons said. “Seventh grade was really good. Eighth grade was a struggle because I had to pace myself without them (the current sophomores).”

“Coming into high school, I didn’t expect to run varsity,” Eddington said. “Everyone knows me as Reed’s sister and Perry’s sister. I do look up to Reed a lot, though, and now I’m able to experience what my brother experienced (running for Idaho Falls).”

They are also getting accustomed to the atmosphere of varsity meets, particularly large ones like the Cardinal Classic. Eddington and Lemons said they both get nervous before races, something Lewis, Corgatelli and Kohler can relate to. Their pre-race routines differ, but they’ve found what works for each of them. Lewis and Eddington said they like to have a ‘pump up’ song in their heads, Corgatelli said their team’s pre-race prayer helps her and Lemons reminds herself that if she and Kohler could run a half marathon, she can run a high school 5k.

Kohler picks a mantra from the book Strong by U.S. distance runner Kara Goucher and consumes the same two snacks the day before a race. Sharing those aloud prompted laughter from Corgatelli, Lewis and Eddington, to whom she said, “Don’t judge me.”

“Before Bob Firman (Invitational), I bought a Naked Juice Mango drink and a head of broccoli,” Kohler said. “Broccoli is my favorite vegetable.”

The next meet for the Tigers is a meet they are co-hosting, the annual Tiger-Grizz Invitational scheduled for Friday afternoon at Freeman Park. As of Tuesday, 31 teams are registered, including last year’s 4A third-place team Twin Falls whom the Tigers are particularly looking forward to racing. The Tigers placed fourth in last year’s varsity A girls team standings, five points behind third-place Thunder Ridge, in a historic meet that featured a District 6 sweep of varsity A team titles (Idaho Falls boys, Skyline girls) and varsity overall individual titles (I.F.’s Zach Erikson, Skyline’s Sariah Harrison).

“All of us want to get closer together with our times,” Lewis said of Tiger-Grizz. “I think one of our biggest goals is to stay in a pack, stay together and move up.”

While the two-time defending 4A state champion Idaho Falls boys have compiled considerable hardware recently, the girls are adding to their collection thanks to how this season has begun. Some of the Tigers said they started thinking about districts and state over the summer, and what could be possible for this year’s varsity girls after placing fourth last year in a tight 4A girls state meet.

“(Last year) definitely motivates me to try harder this year, run my best and try to stay up with these super fast freshmen,” Lewis said.

“Because our district is so competitive, it makes us all want to race faster,” Corgatelli said. “There’s so many good teams on this side of the state. It’s crazy to think about, but I.F. has never won a girls state title. I could see that happening in the next couple years.”