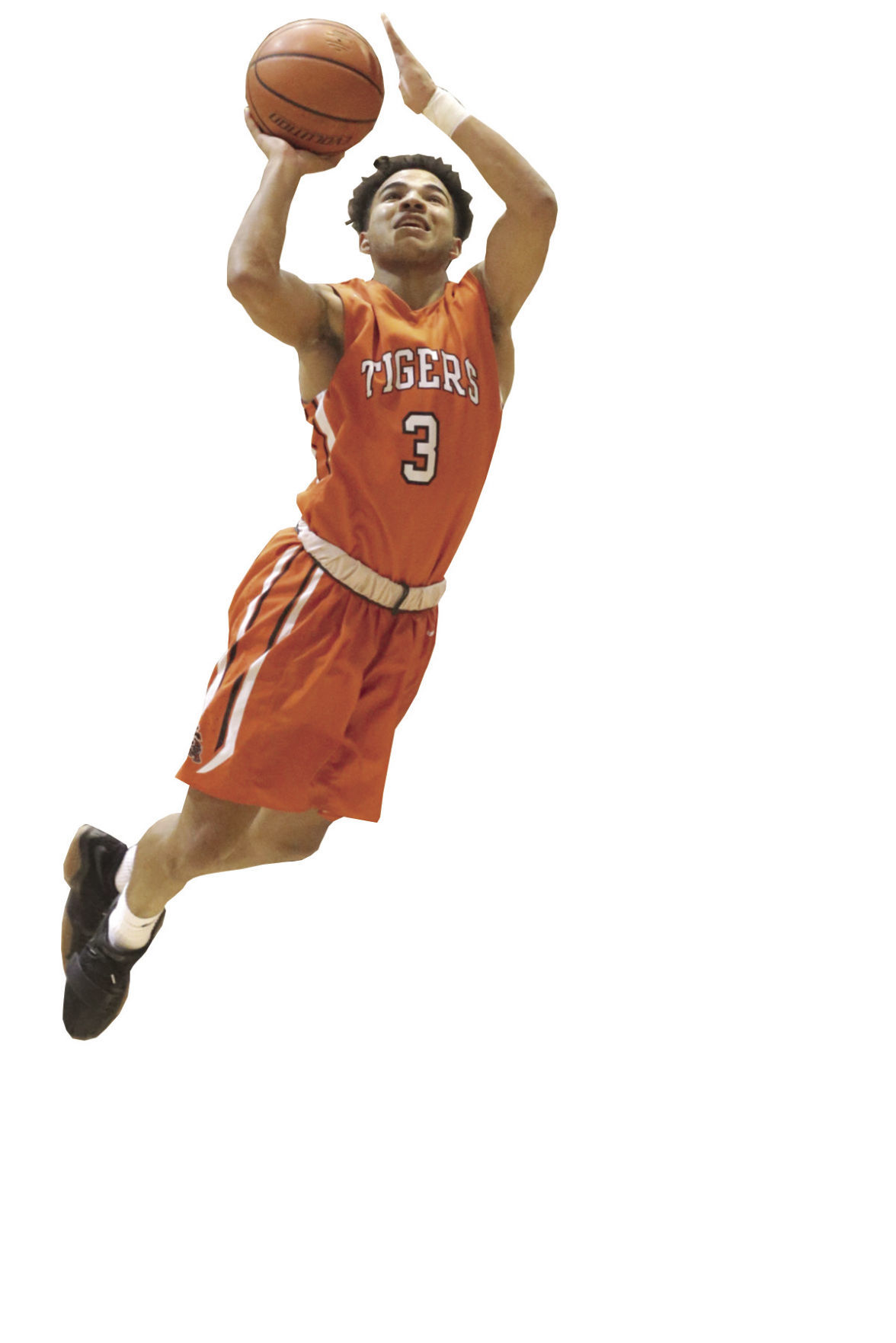 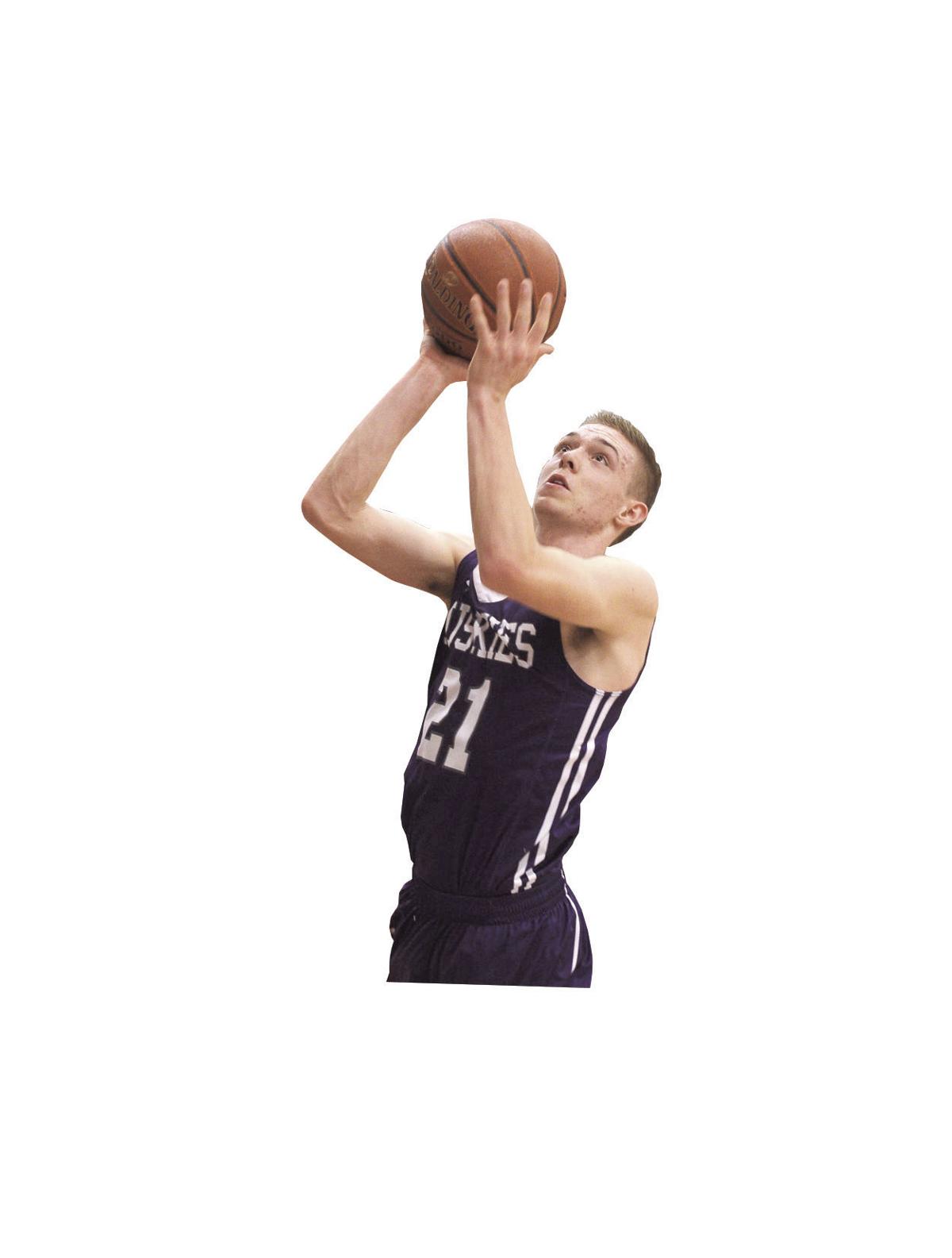 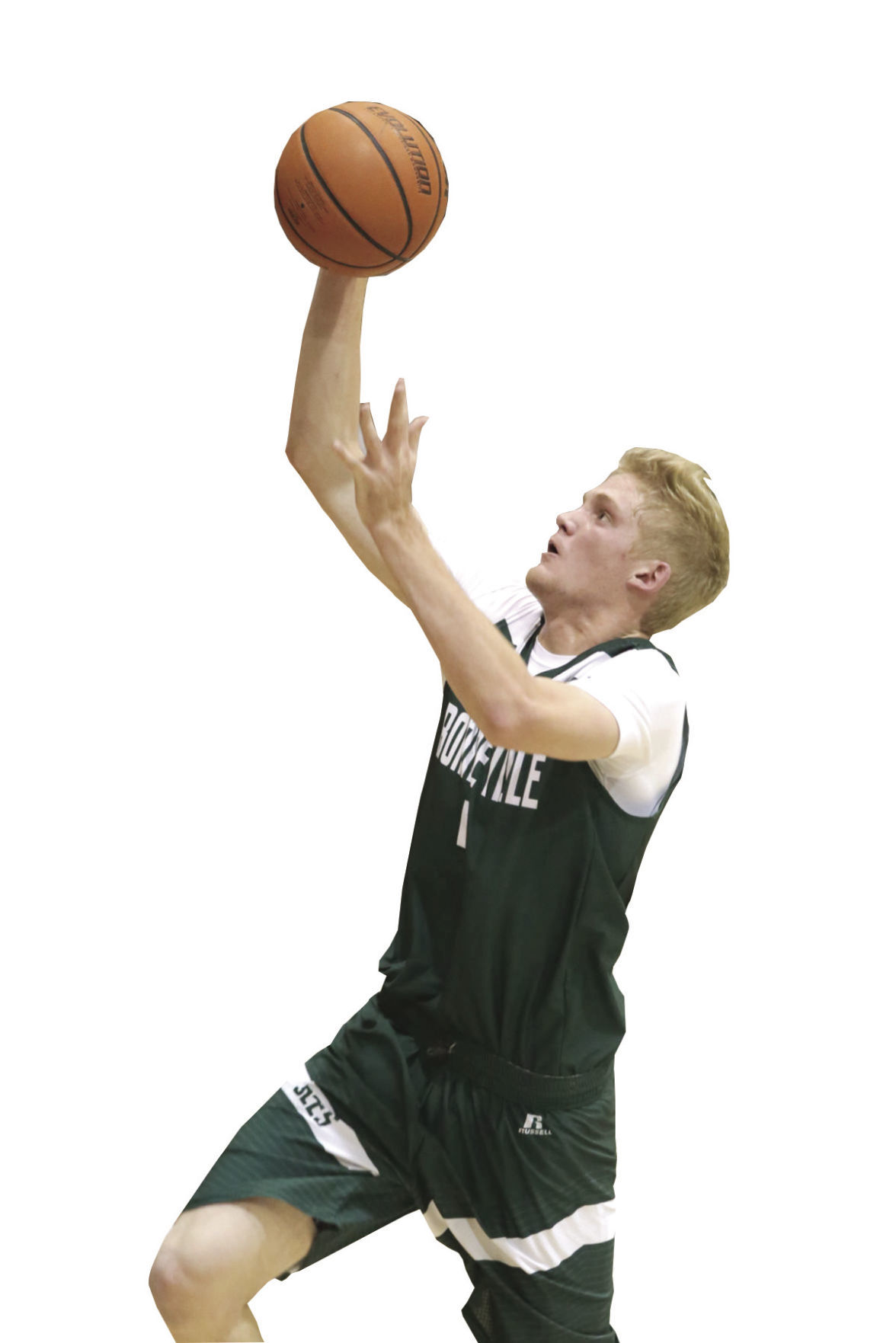 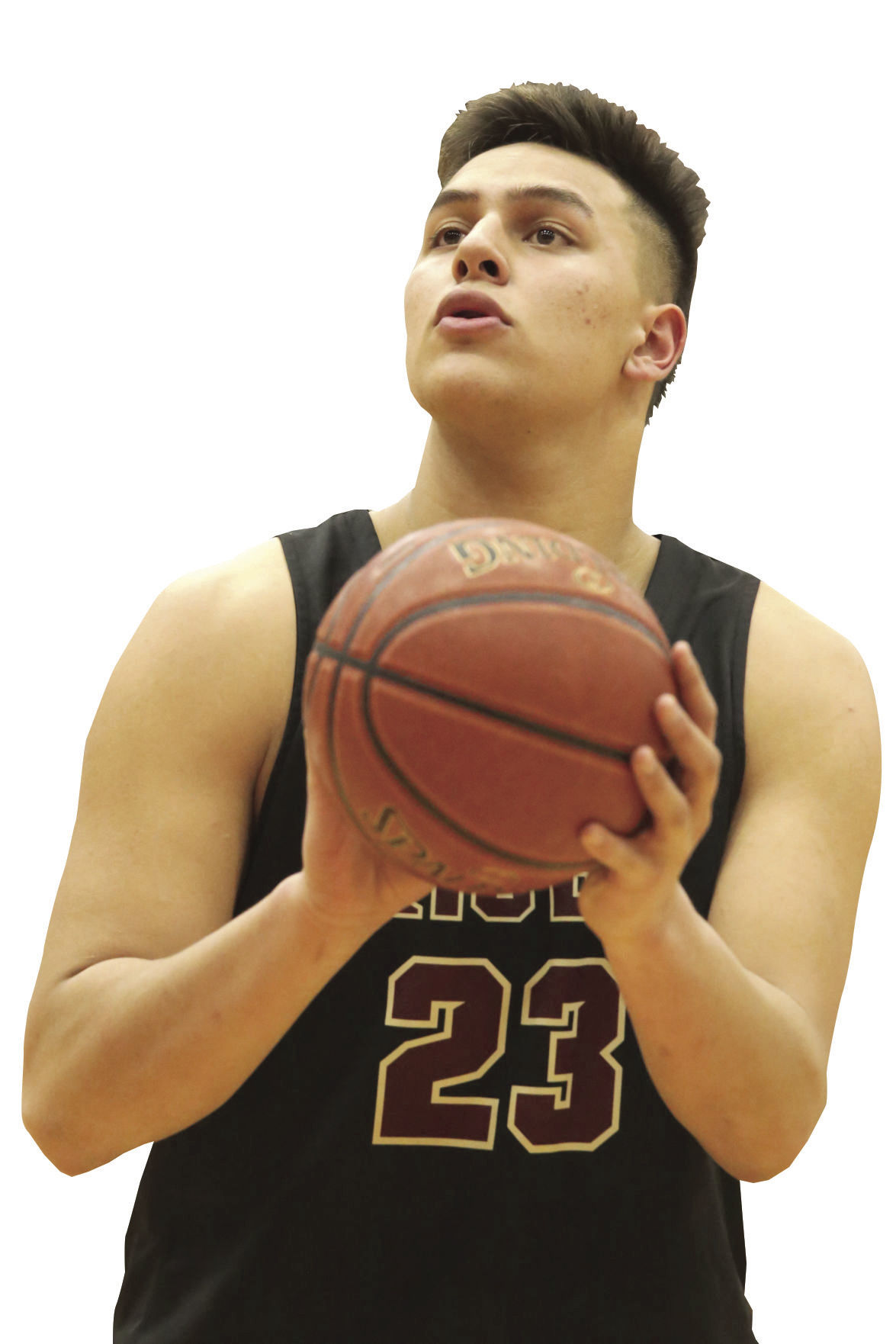 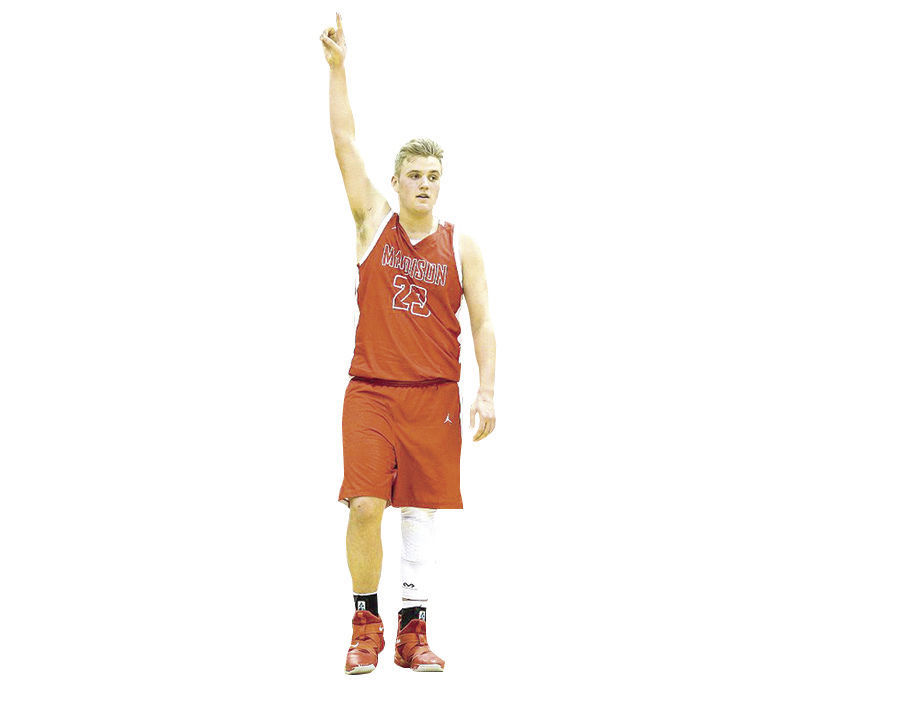 THE PLAYER: On a team that seemingly had all of the pieces to make a run to the 4A state title game, Bowen was the maestro that made the Tigers hum. He could score, pass off to teammates, run any tempo the matchup required, and led by example with a combination of energy and calm confidence. He helped lead I.F. to its first state championship in 31 years, and fittingly, had the ball in his hands as the final buzzer sounded and the celebration began.

WHAT COACHES SAID: “When you’re as talented as Kalvin is, sometimes kids have the inclination to want to take the game over all the time. Kalvin wasn’t like that. He knew how to pick you apart and he just kept finding his guys and they really trusted each other. He was never out of control. — Skyline coach Clint Cornish

THE PLAYER: Arguably the area’s top overall athlete, Hawkes elevated his game in the 2A state tournament, leading the Huskies to the program’s first state title while averaging 25 points, 6.3 rebounds, 3.7 assists, 2.3 blocks and four steals over the three-day stretch. He was named MVP of the title game and defensive MVP of the 2A tournament. Despite being listed as a guard, the 6-foot-3 Hawkes was usually key in defensive schemes to stop an opponent’s top player no matter the size or position.

WHAT COACHES SAID: “What he did in the state tournament and throughout the year, I thought he was a phenomenal player … When you have a person like that, it turns a good team into a special team.” — Sugar-Salem coach Shawn Freeman

THE PLAYER: Perhaps better known as one of the state’s top baseball players, Hostert proved to be a force on the court. At 6-foot-6, he posted-up smaller players and dominated the boards. He could also step outside and knock down perimeter shots, presenting matchup problems for opposing defenses. He was also among area leaders with 3.5 assists per game. Coaches noted Hostert improved his shooting touch this season, making him a true offensive threat as the Bees made a postseason run that ended in a state play-in game.

WHAT COACHES SAID: “He’s a good athlete and could stretch you from a defensive standpoint by shooting the 3, and he was a good post-up player. He created a lot of issues and problems for sure … He can jump out of the gym and he can create some defensive havoc.” — Idaho Falls coach Howard Hart

THE PLAYER: Togiai was one of the key pieces on a Trojans team that finished 20-8 and reached the third-place game of the 5A state tournament. On a team that featured plenty of scoring balance, Togiai, at 6-foot-6, was a physical presence and tough in the paint. “He just ate us up,” Hillcrest coach Dave Austin noted. “He just punishes people with his strength.” The lone junior on the all-area first team, Togiai will be among a core group of Rigby returners next season.

THE PLAYER: On a team that prided itself on defense, Hathaway proved a versatile scoring threat inside or outside. He shot an efficient 56 percent from the field and led the Bobcats with 44 made 3-pointers. He was instrumental in the team’s run to the 5A state championship game, averaging 18.3 points and nearly seven rebounds over the three games.

WHAT COACHES SAID: “He’s a great shooter anywhere on the floor. He used his body really well inside. He’s not a big kid, but played post inside a lot and did a great job. He was really smart about how he got himself in position.”— Hillcrest coach Dave Austin

Gerohm Rihari, Sr., G, Sugar-Salem: Diggers coach Shawn Freeman likes to make the distinction between a leading scorer and a leading player. Rihari averaged a modest 8.6 points and 3.0 rebounds, but his leadership was crucial in helping guide Sugar-Salem to the 3A state championship. “I felt he was the person that changed the whole dynamic of our team,” Freeman said.

Paul Wilson, Sr. C, Idaho Falls: The numbers don’t tell the whole story of how valuable Wilson was to the Tigers’ run to the 4A state championship. At 6-foot-10, Wilson’s defensive prowess wasn’t necessarily measured in blocked shots, although he did average 2.5 per game. “He pushed a lot of people away from the middle,” Idaho Falls coach Howard Hart said. “He would alter shots directly or indirectly by not having them come into the paint area.” Wilson also averaged 10.3 points and 6.4 rebounds.

Larz Sutton, Sr., G, Ririe: If defenses focused too much on the Bulldogs’ Michael Ure, it was Sutton who would take advantage, finding the gaps and slashing to the basket for layups or foul shots. Playing with a seemingly boundless amount of energy, Sutton averaged 13 points and 3.3 rebounds, and was among area leaders with 4.2 assists and 3.0 steals.

Landon Bowman, Sr. G, Watersprings: There was no doubt about Watersprings’ go-to player. Bowman averaged 22.5 points and 6.9 rebounds per game and led the area with 90 made 3-pointers while shooting 41 percent from 3-point range. He also averaged 3.8 assists and 2.5 steals per game, providing a balance that helped the Warriors finish with a 14-9 record. “We’re not where we are without him,” Watersprings coach Scott Moe said.

Kyle Austin, Sr., G, Hillcrest: Austin helped lead the Knights to the 4A District 6 title game where they fell to eventual 4A state champion Idaho Falls. Austin averaged 13.4 points, 6.3 rebounds and 3 assists. He could hit the midrange jumper, step out for 3-pointers, or get to the rim if needed. “He did everything for them,” Bonneville coach John Tucker said.