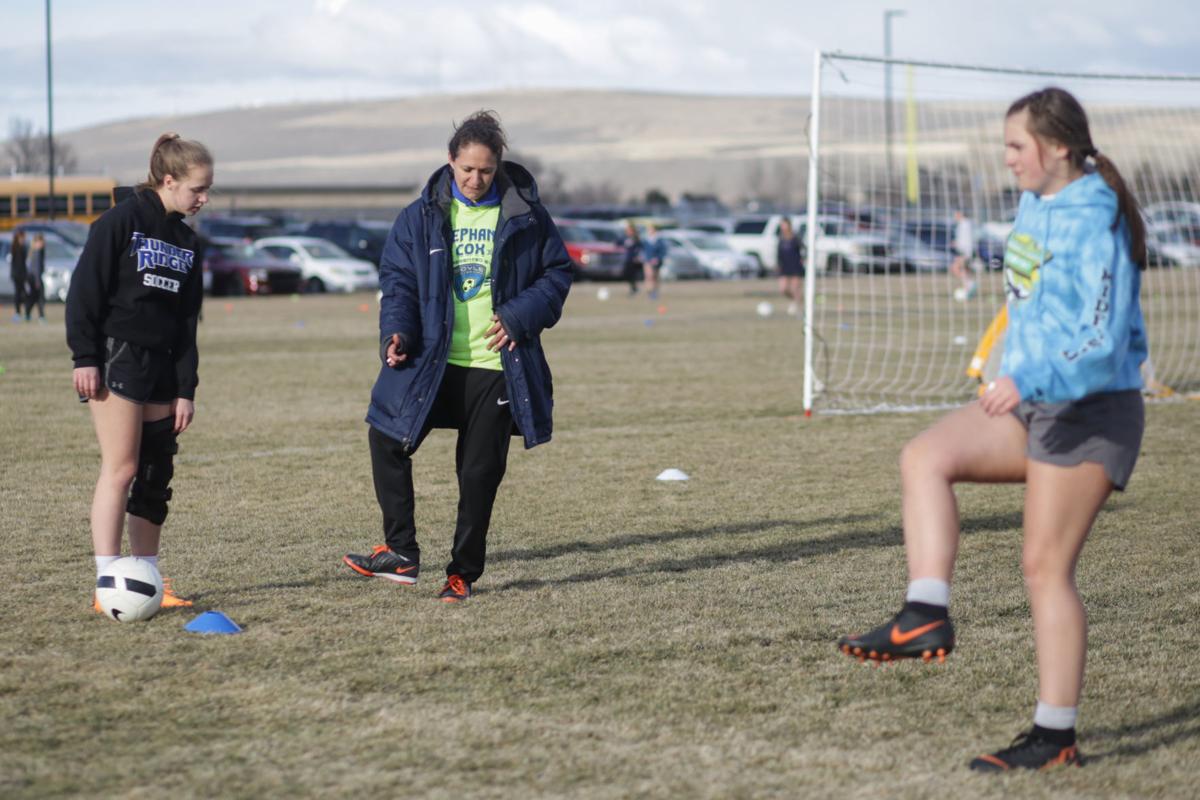 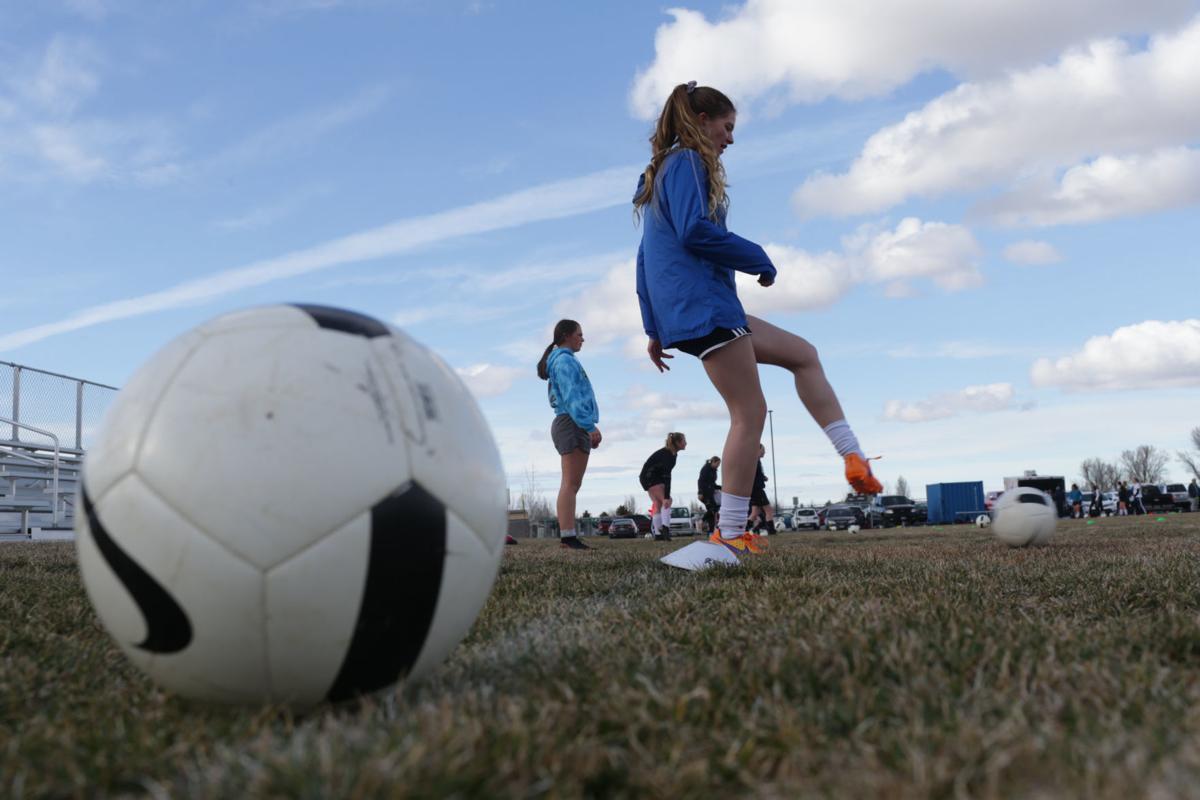 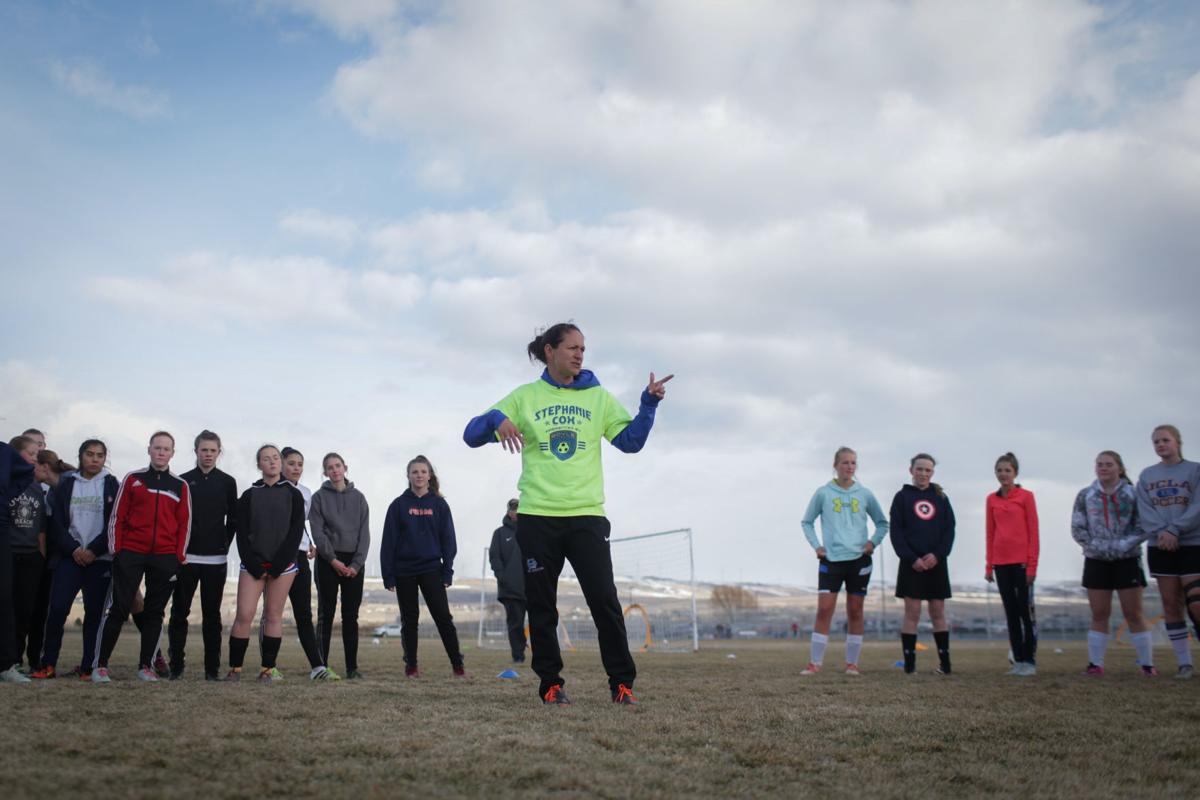 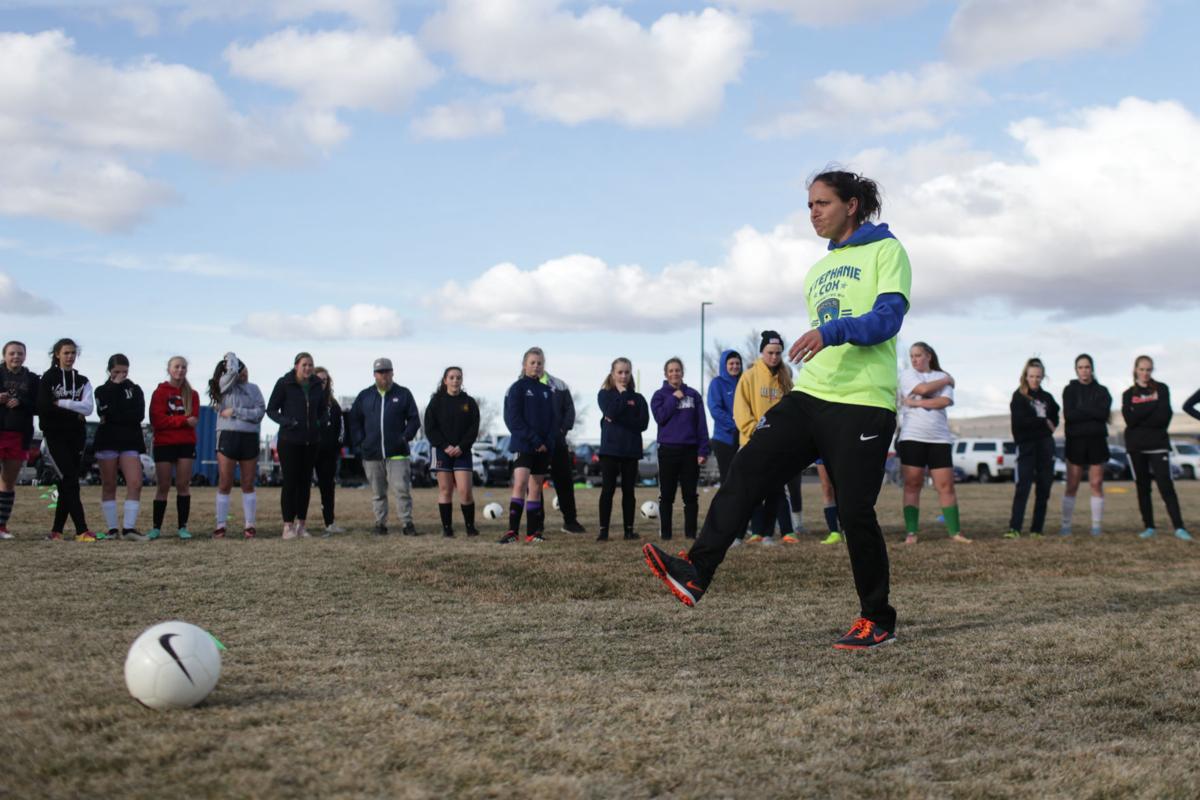 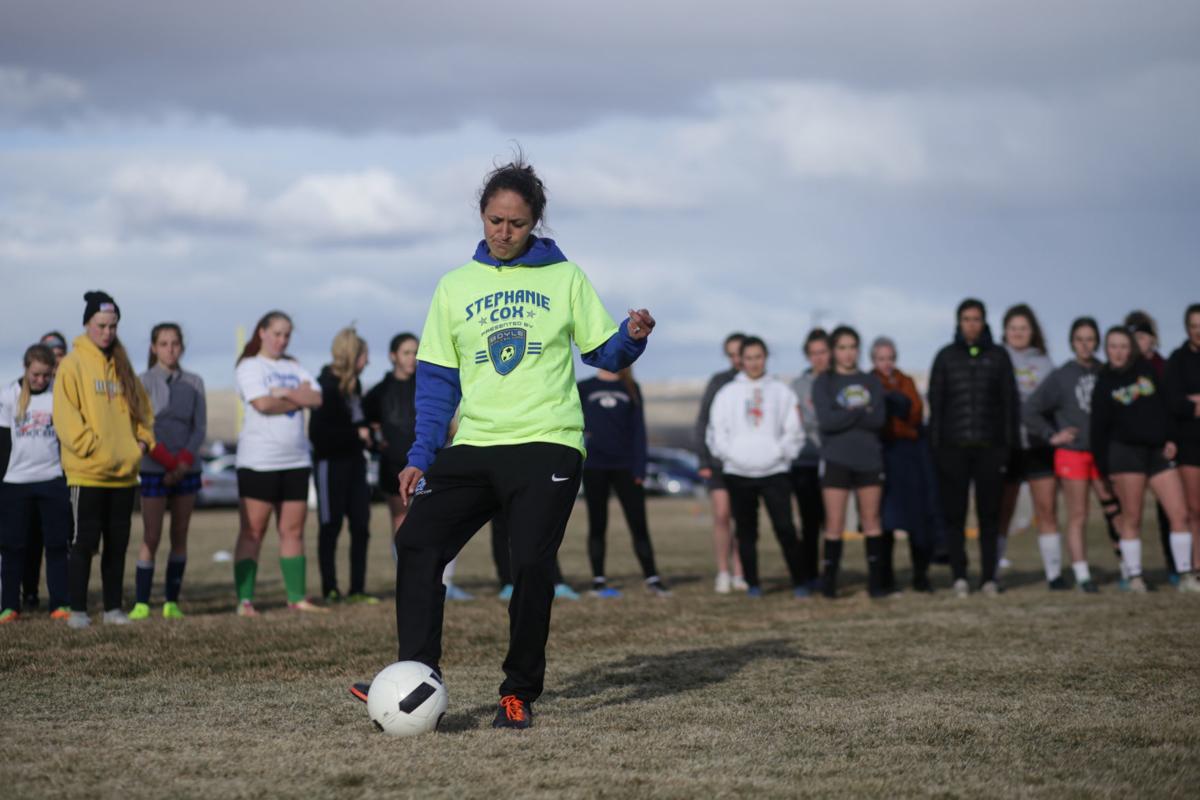 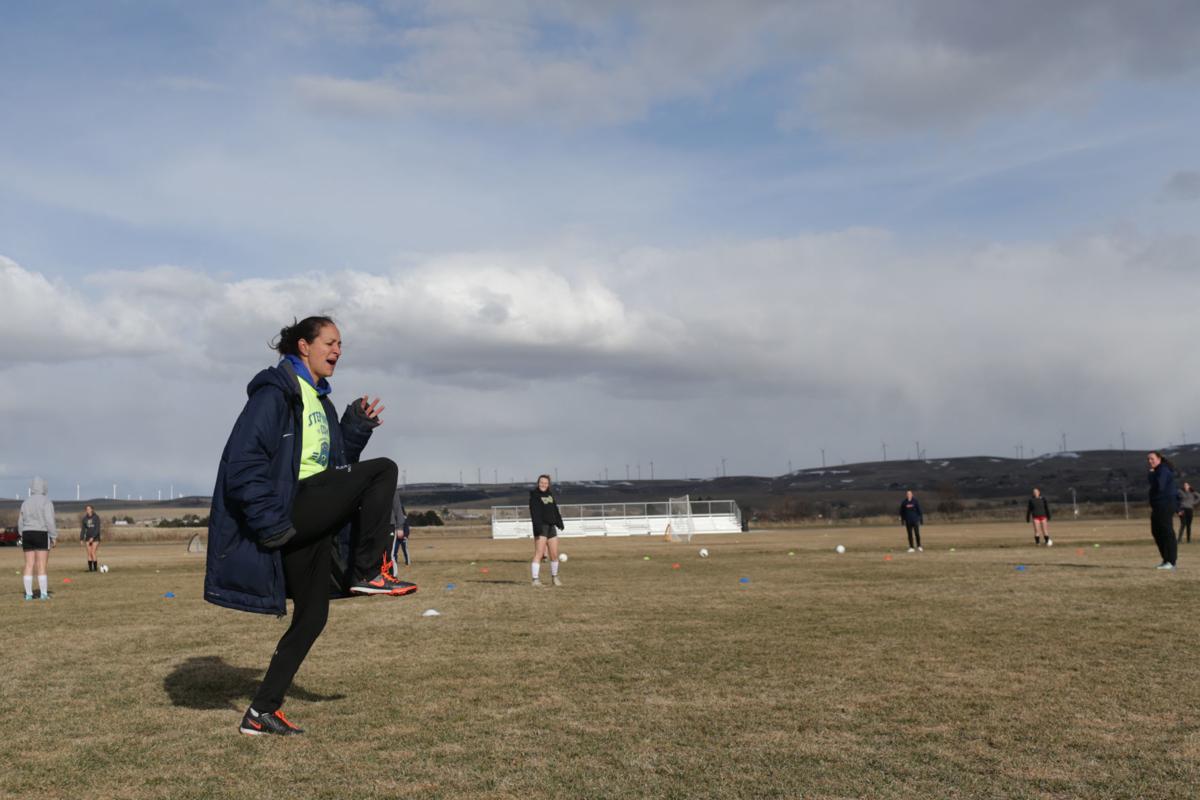 She not only got to meet one, but learn from her.

Stephanie Lopez Cox, a member of the 2008 U.S. Olympic and 2007 and 2011 U.S. World Cup women’s national teams, was at Thunder Ridge High School for a soccer camp organized by Thunder Ridge girls soccer coach Seth Boyle. The camp, which began Thursday and concludes today, drew 40 girls soccer players ages 11 to 13 and 80 girls soccer players ages 14 to 18. Chavez was one of those 80 in the older group, which included high school players from Firth, Rigby, Shelley, Snake River, Idaho Falls, Bonneville, Hillcrest, Skyline, Thunder Ridge and Blackfoot, and said she has gained much from the first two days of camp.

“She really cares about the people who play soccer,” Chavez said. “She taught me some new skills yesterday that I didn’t know about.”

Cox also made an impression on Hillcrest senior Brett Behrend and Thunder Ridge junior Sidney Lance, who play travel soccer with Chavez for Fusion FC Revolution. Former Hillcrest teammates prior to the opening of Thunder Ridge, Lance and Behrend said they were both ‘very excited’ upon first hearing about Boyle’s camp and were soaking up as much as possible Friday.

“You see them on TV and they seem so far away,” Behrend said. “It’s cool to know they’re just ordinary people like you. They’re amazing, but they’re people too. She’s really inspiring.”

“She’s definitely really positive,” Lance added. “She passes that on to other people.”

The first Olympic soccer player Chavez had ever met also experienced a first this week. Cox said this camp brought her to Idaho for the first time in 18 years, when she attended an Olympic Development Program camp in Moscow.

“I live in Gig Harbor, Washington, by Tacoma and we’ve had a pretty cold winter,” said Cox, who is originally from Elk Grove, Calif. “This is a bit more windy than I’m used to, but it’s been fun to hang out with so many great coaches and girls who truly love the game. I wouldn’t call myself a soccer junkie. I don’t watch a lot of soccer, but I love the game. I told the kids today ‘See the joy.’”

Boyle, who moved from California to Idaho last July upon accepting the Thunder Ridge coaching job, said he approached Thunder Ridge athletic director Cody Jackson and principal Douglas McLaren about having Cox come to the school for a camp. Boyle coached Cox in high school and on a club team that featured Megan and Rachael Rapinoe, and he stayed in touch with Cox as her career progressed. Boyle said his hopes for the camp were that it would be beneficial not only to Thunder Ridge, but to eastern Idaho.

“In this part of Idaho, it seems that soccer is a second tier sport,” Boyle said. “It’s rare to have someone of her caliber come to Idaho. Once we put (the camp information) out there, registration filled up pretty quickly.”

Boyle arranged for Cox to speak to students Friday in Thunder Ridge’s Titan Think Tank program and to eastern Idaho athletes, coaches and parents in a meet and greet in the gym following Friday’s U14-U18 camp session. Boyle said anyone, soccer player or not, could benefit from hearing from someone who has ‘a history of successes and some tough losses.’

“How she had her baby and worked her way back onto the national team, I want the kids and parents to hear that,” Boyle said. “My hope is that young athletes will hear that and take that to heart. On our club team, we had great players but you’d think every player was on the national team by how she inspired them. She’s just a really nice kid--I say ‘kid’ and she’s a woman--but she has the best interests of everyone around her. It’s great to see her rewarded for her work.”

A defender, Cox announced her retirement from competitive soccer in fall 2015 after 49 appearances in three seasons for the National Women’s Soccer League team Seattle Reign FC. Now she is an assistant coach for Reign FC, which has relocated to Tacoma, and gets to coach Megan Rapinoe, her teammate through her club, college and international career.

“The Think Tank class, they’ve been talking a lot about rollercoasters in life,” Cox said. “Those can be good because they build character.”