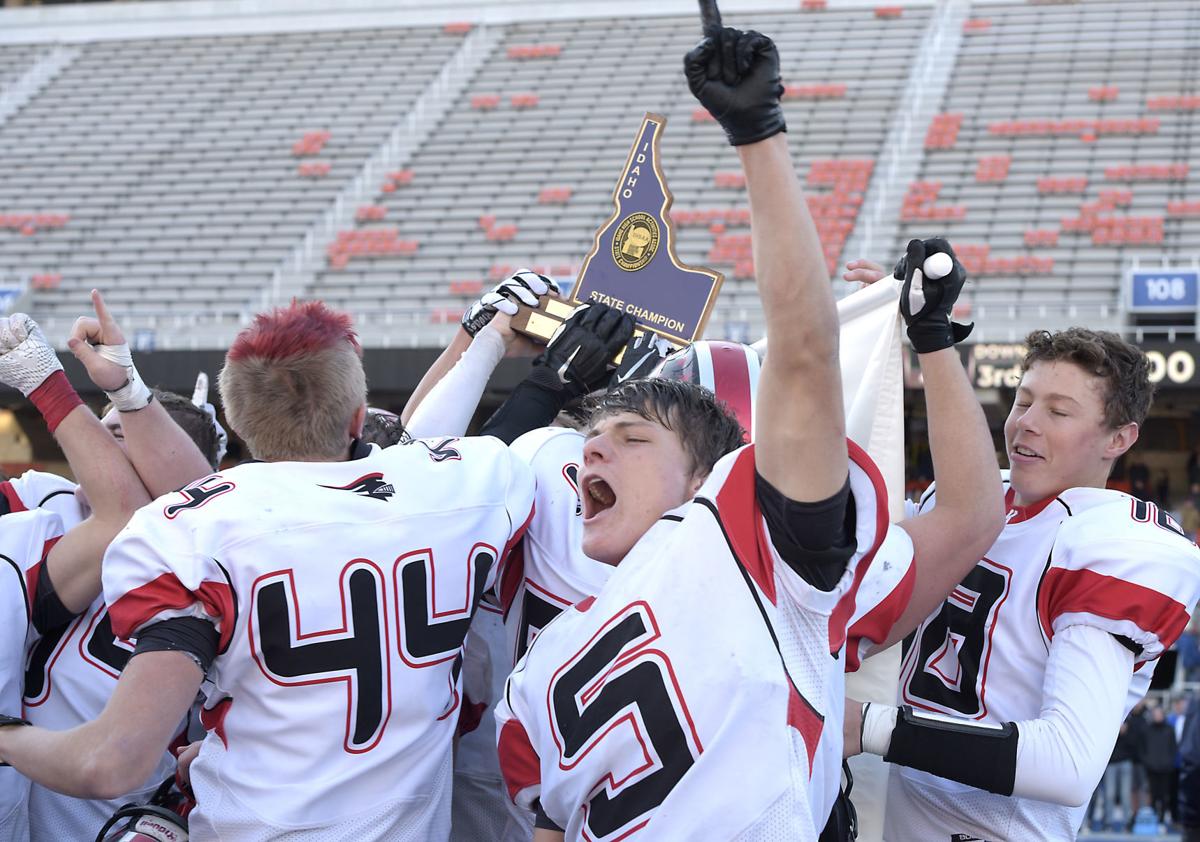 Members of the Hillcrest High School football team celebrate with the 4A state championship trophy and banner after defeating Bishop Kelly 55-21 on Saturday at Albertsons Stadium in Boise. 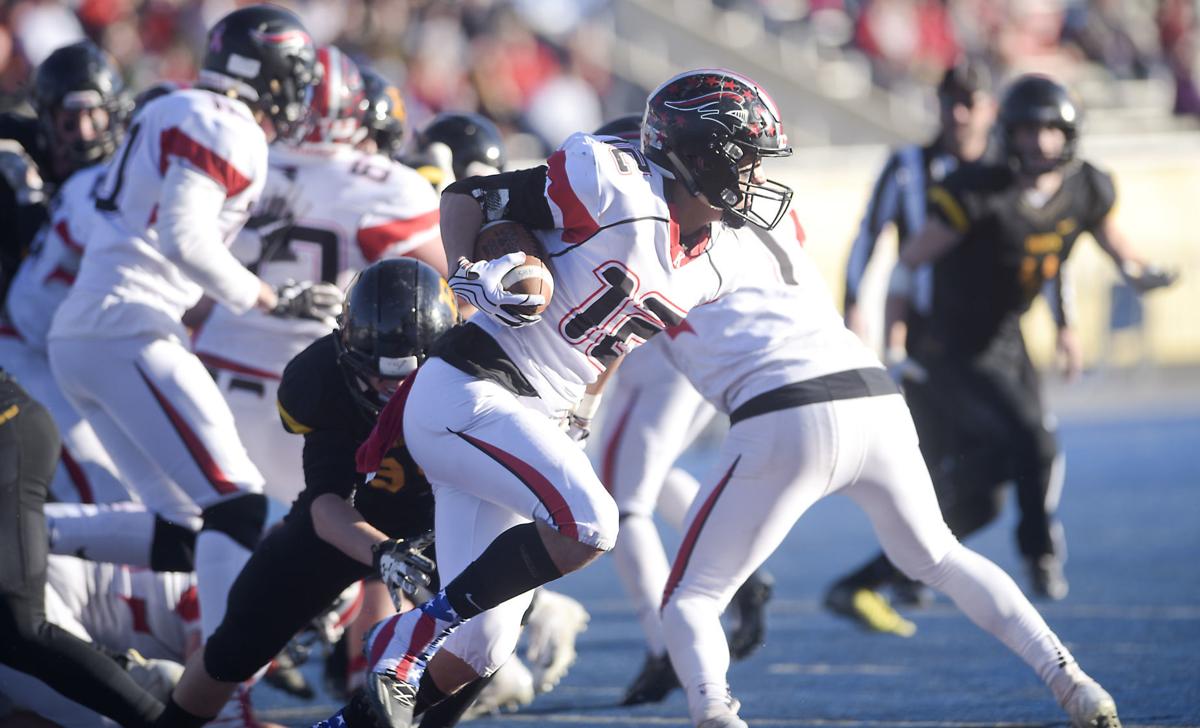 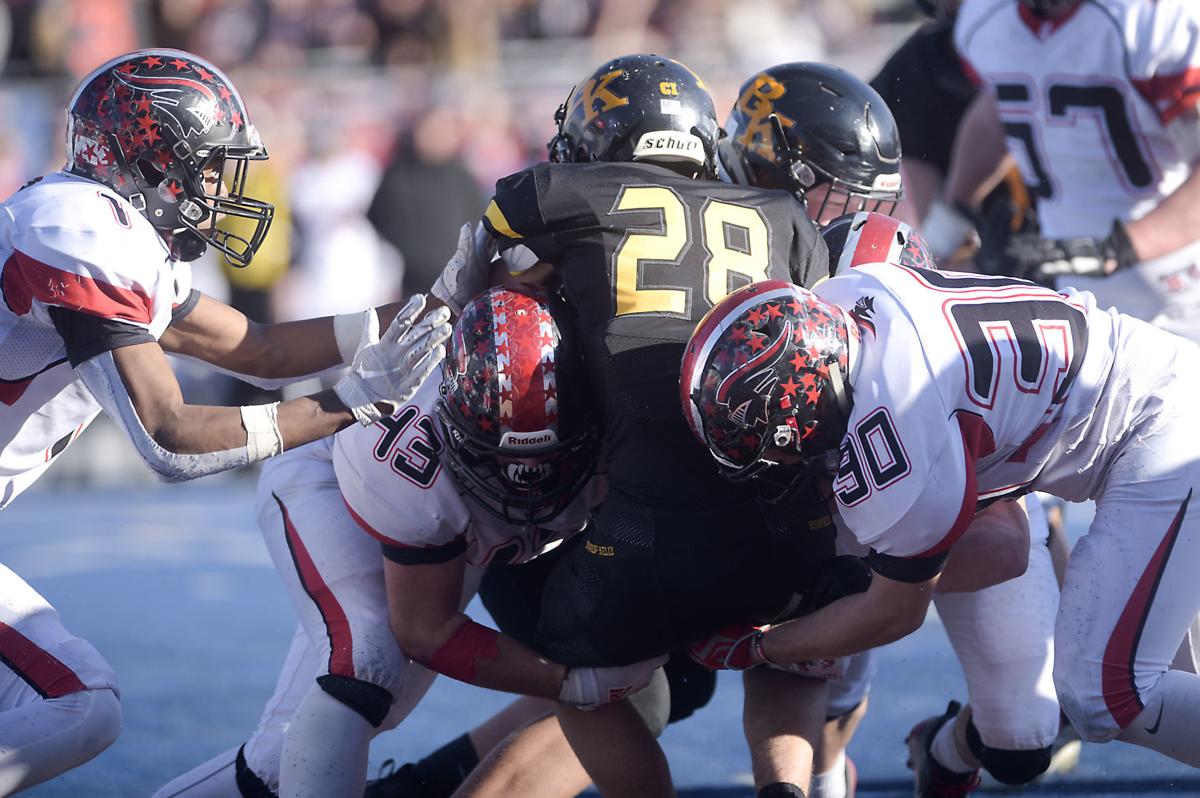 Members of the Hillcrest High School football team celebrate with the 4A state championship trophy and banner after defeating Bishop Kelly 55-21 on Saturday at Albertsons Stadium in Boise.

BOISE — A chant. Some fist pumps. A celebration that’s waited a decade.

The Hillcrest Knights football team is 4A state champion again.

The Knights from Ammon dominated the Knights from Boise on Saturday afternoon at Albertsons Stadium, 55-21, thanks to 100-plus rushing yards from their typical terrific 2018 trio of Kyle Austin, Oakley Hussey and Trae Henry.

Hillcrest took a 14-0 lead after the first quarter and never relinquished it. The Knights eventually took a 42-14 lead after producing five rushing touchdowns (Hussey had three, Austin had two and Henry had one).

Austin led all rushers with 224 rushing yards on 16 carries. Hussey added 173 yards on 15 carries and Henry rushed for 137 yards on 10 carries for the Knights in red, who extended eastern Idaho’s 4A football state title streak to three consecutive seasons.

“We felt no one thought of us after (running back) Jordan (Neuerburg) got hurt. He’s the best football player I’ve played with in my entire life, and when he went down, no one thought we would win,” said lineman Ed Carle before taking pictures with the Idaho High School Activities Association’s blue trophy. “We just opened the holes, and they hit them well. It was teamwork, it was a group effort. People had to step up with Oakley and Trae and the run game.”

Eight weeks after his season ended due to a knee injury against Rigby, Neuerburg dressed late in Saturday’s game and played two snaps. Seniors embraced their once starting running back, as the Knights (12-1) rushed for 587 yards, a new Idaho all-classification football title game state record.

Their scoring output, 55 points, tied a record set by the last championship team Hillcrest produced in 2008.

“I was glad to win it on the blue turf,” first-year coach Kevin Meyer said. “I had high expectations (of Hillcrest) from just watching them on film and we’re pretty demanding, but the mindset was that they wanted to be good … and we just like being physical and I think most teams struggled with our physicalness.”

“Just taking that W and trophy home,” added teammate Dakota Yorgensen, as he hugged his teammates late and Hillcrest’s second team came in with about four minutes left. “That’s what matters at the end of the day.”

While there is no running clock in Idaho football state championship games, there should’ve been. The Ammon Knights’ largest lead was 41 points following Henry’s third touchdown of the day — a 13-yard run that put the Knights up 55-14.

“This was our time to shine and we know, looking back on all those (grid kid) years that the hard work would pay off,” Hussey said. “”We were the underdogs. We wanted to be the underdogs because that’s what we were at the beginning of the year. No one thought we would be here.”

A decade since its previous 4A title, Hillcrest won its second 4A with its second first-year coach.

It wasn’t pretty — the Knights passed just once while playing without players like Neuerburg and Brady Sainz — but the narrative remains the same: Hillcrest football is once again state champs.

“It’s been a journey,” Meyer said. “It’s been a journey since putting the staff together, but the kids really believed in what we were doing. We made adjustments in the middle of the year when Jordan got hurt, but I’m just so proud for our community.”