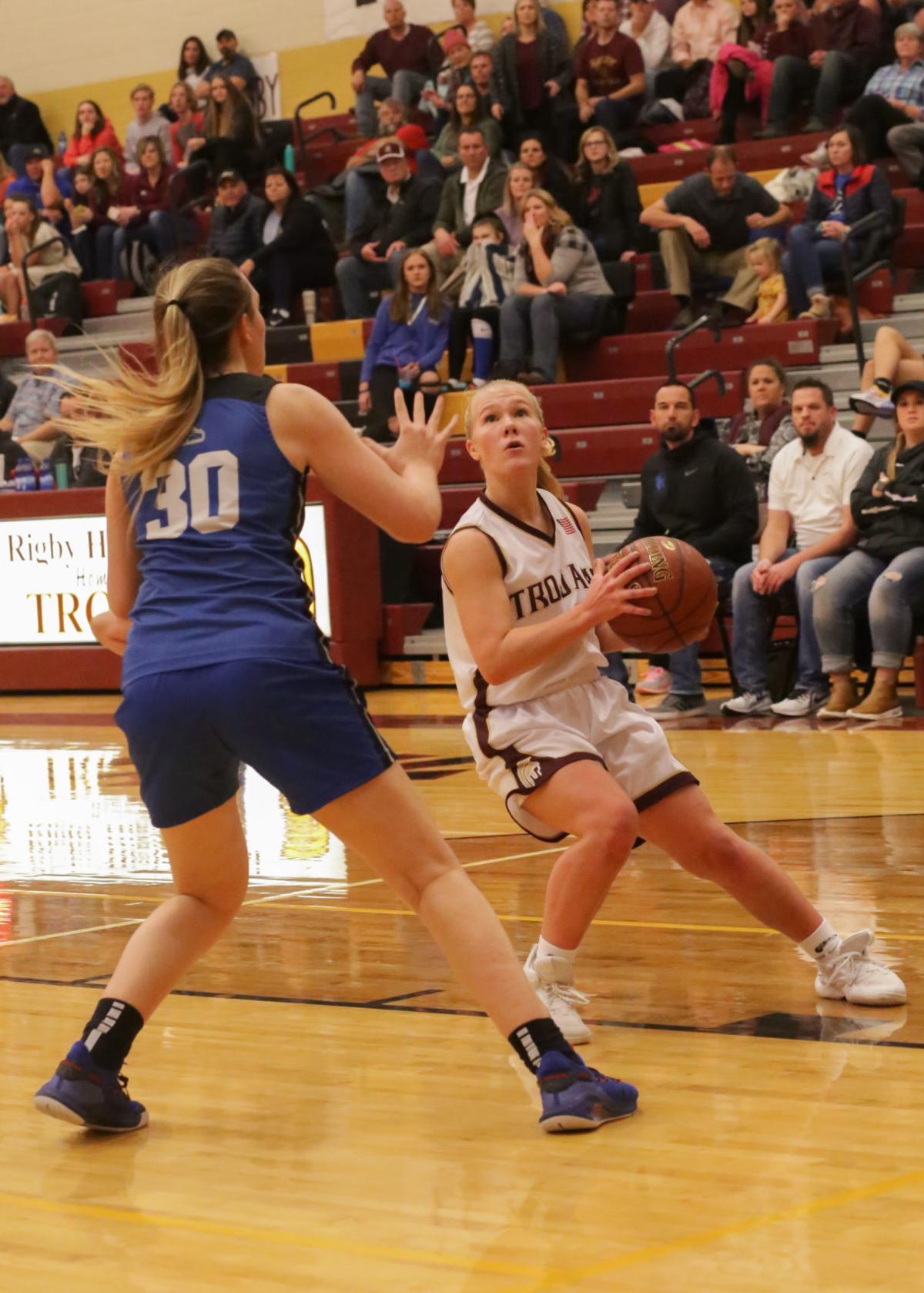 Rigby’s Ruby Murdoch drives to the basket in Wednesday’s game versus Thunder Ridge. 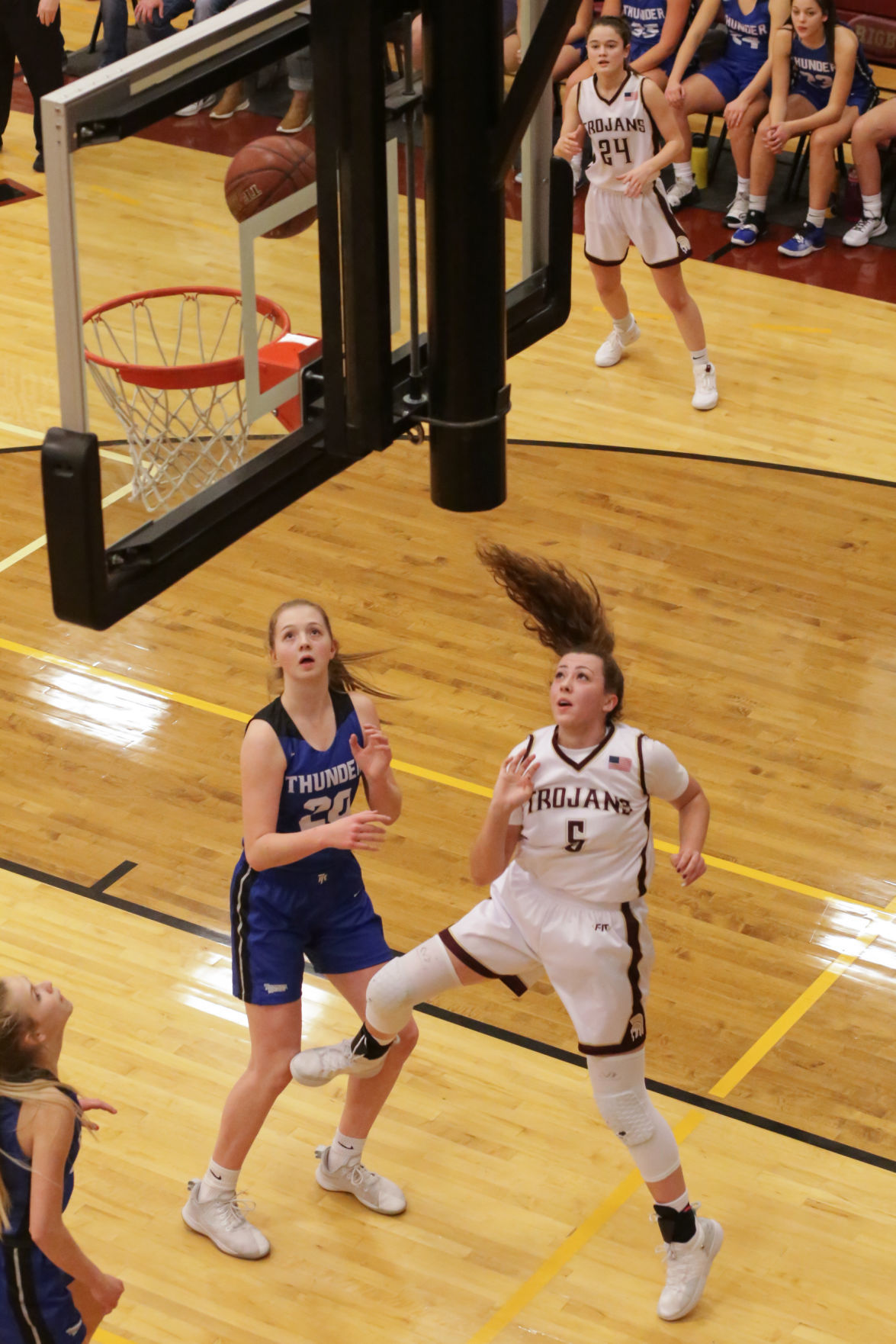 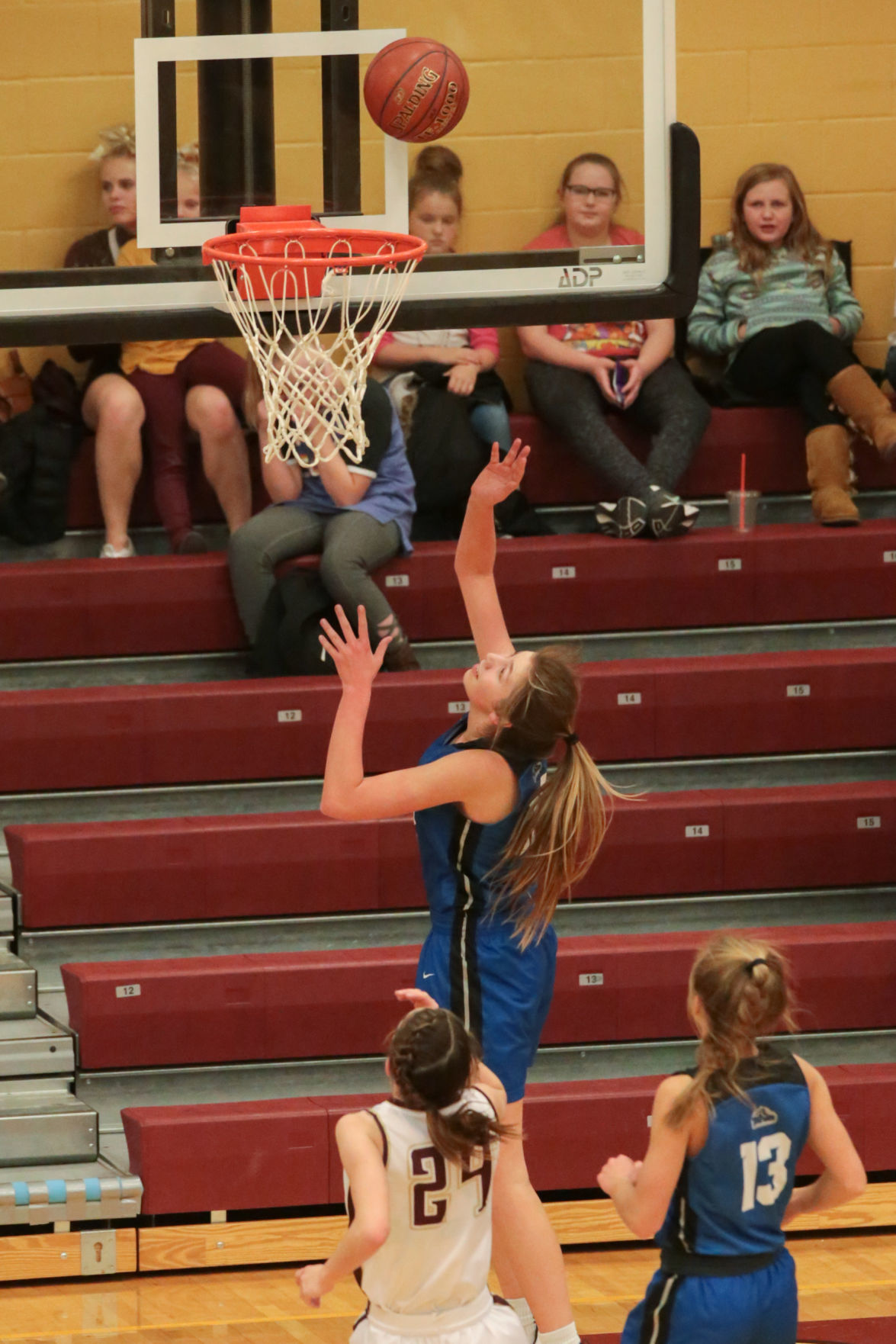 Thunder Ridge's Avery Turnage elevates for the shot in Wednesday's game at Rigby. 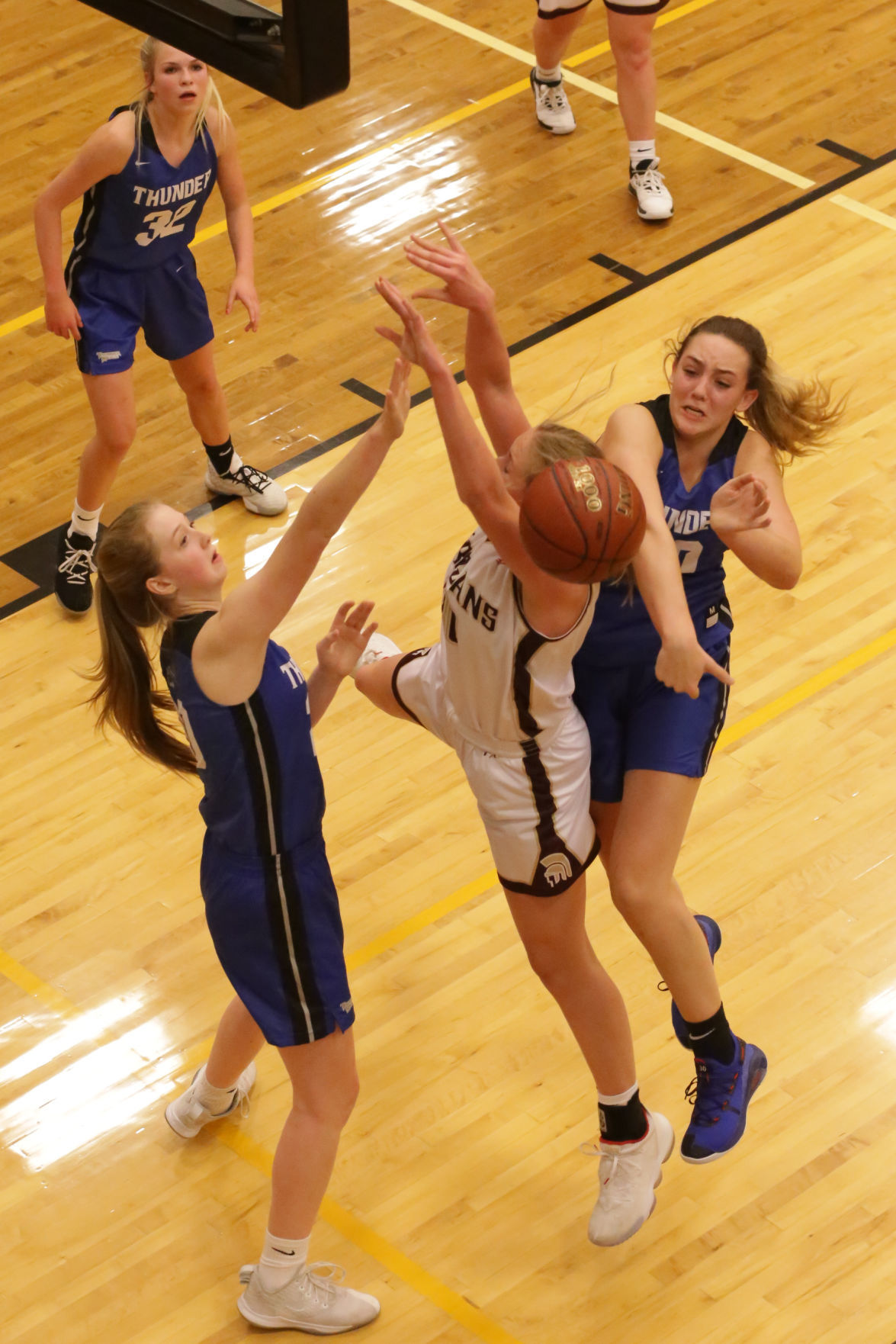 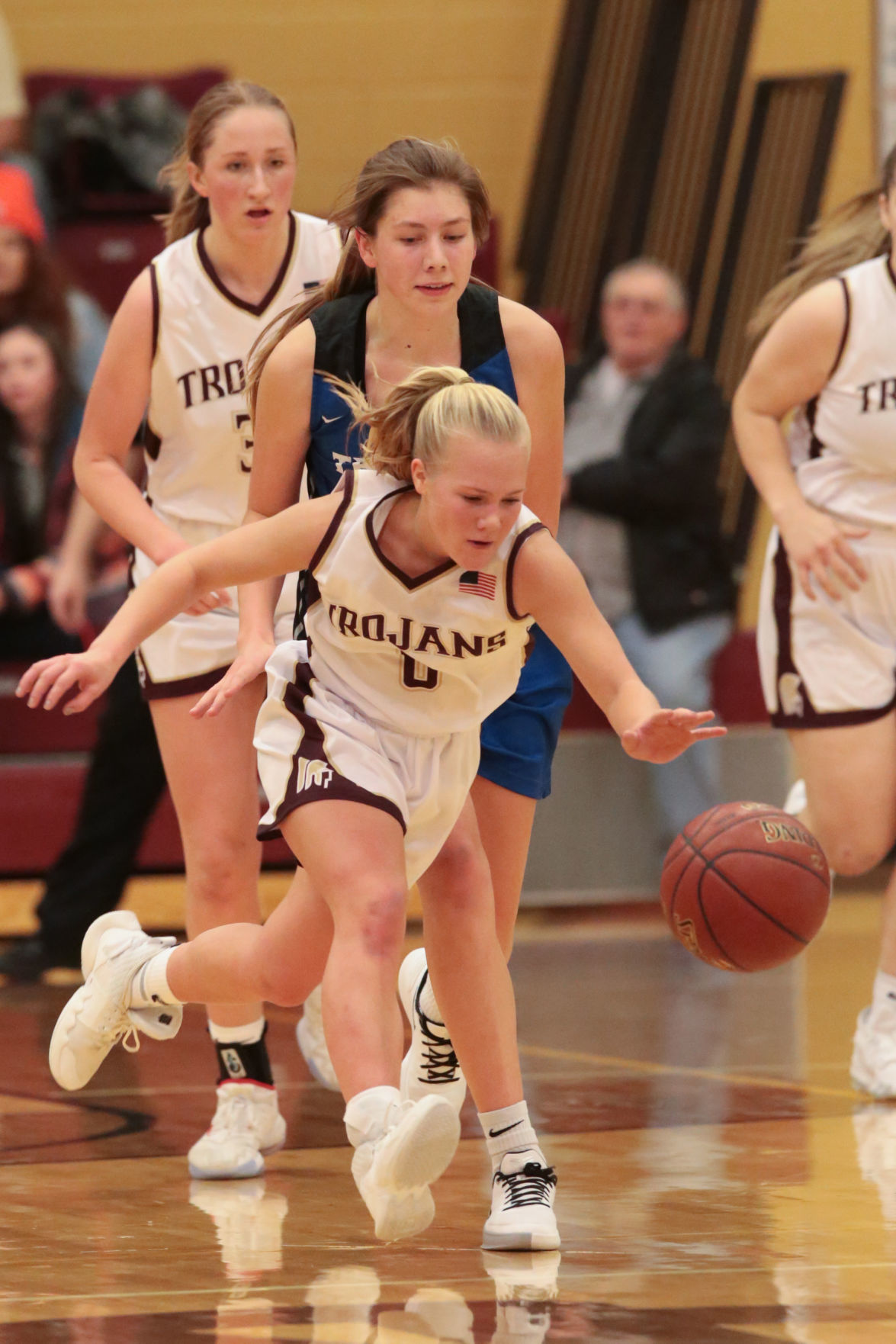 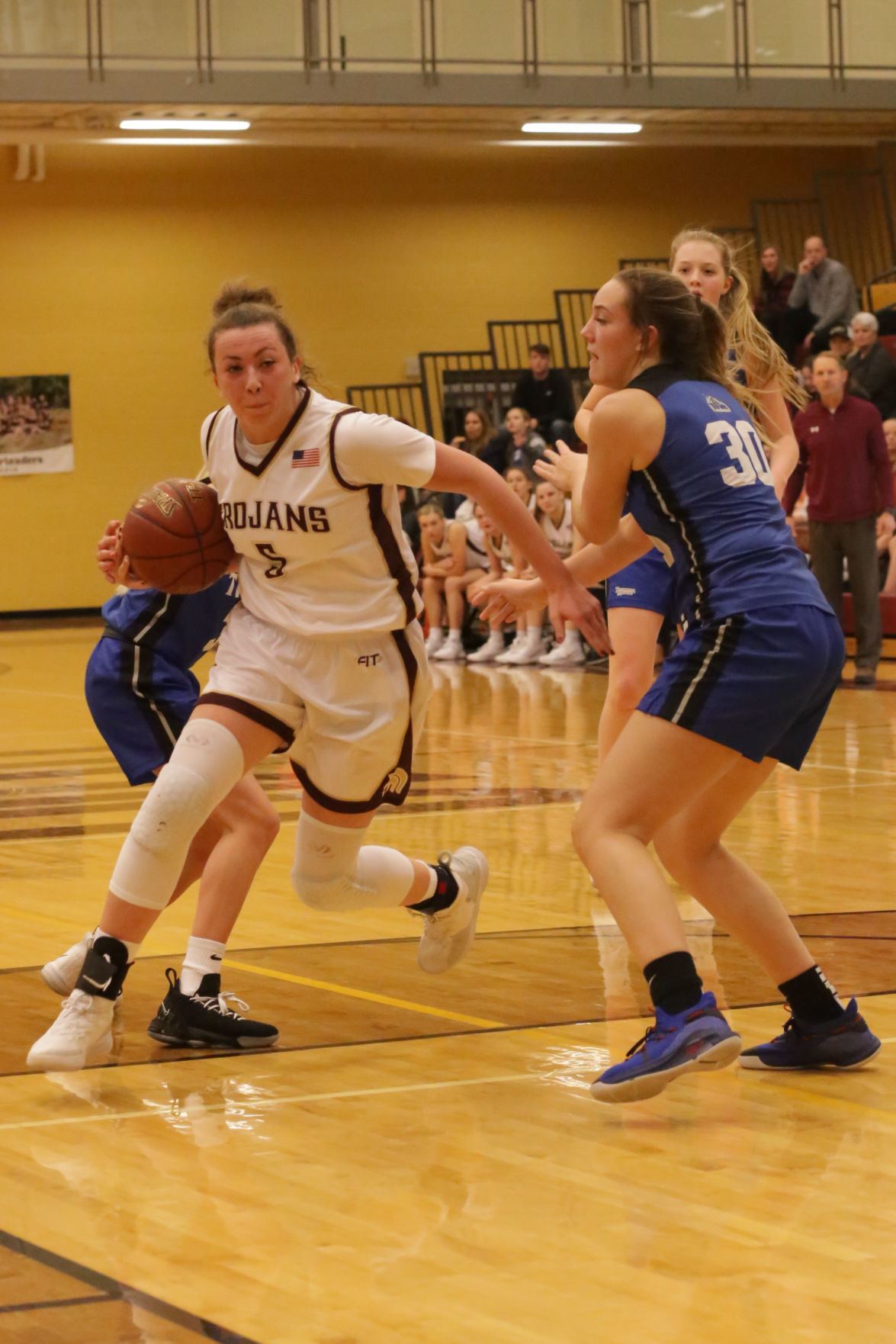 Rigby's Tylie Jones pushes the ball down the court during Wednesday's game versus Thunder Ridge. 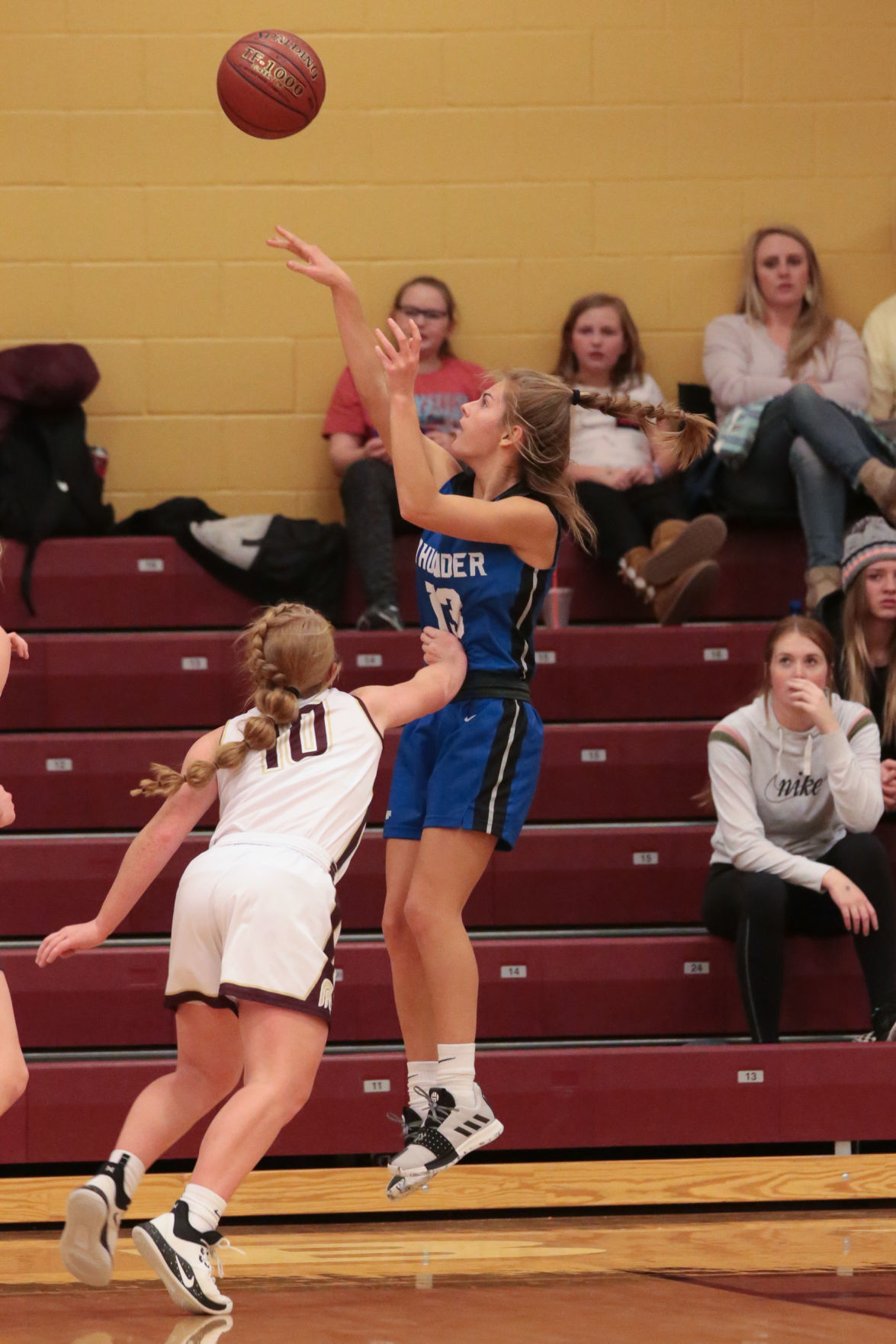 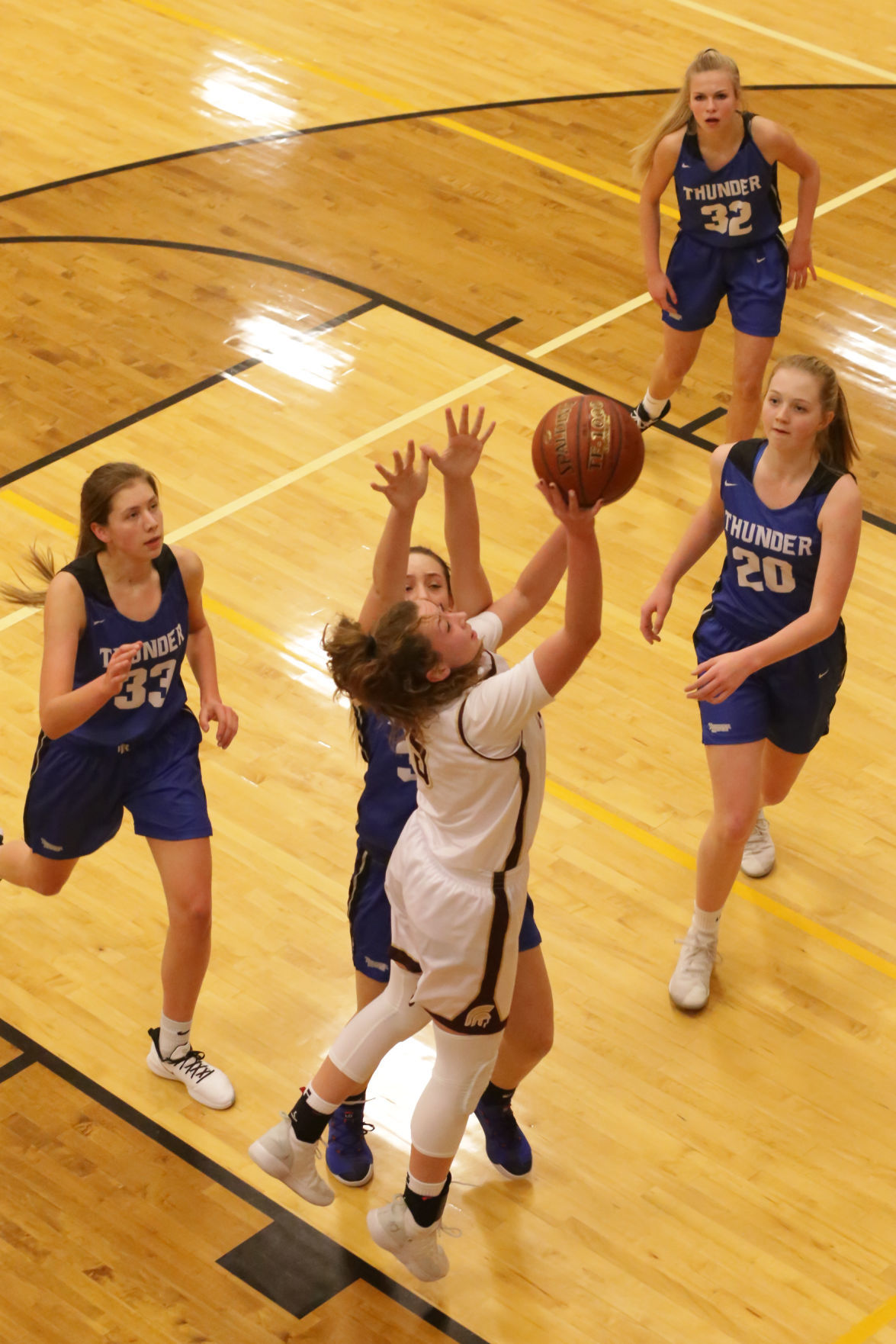 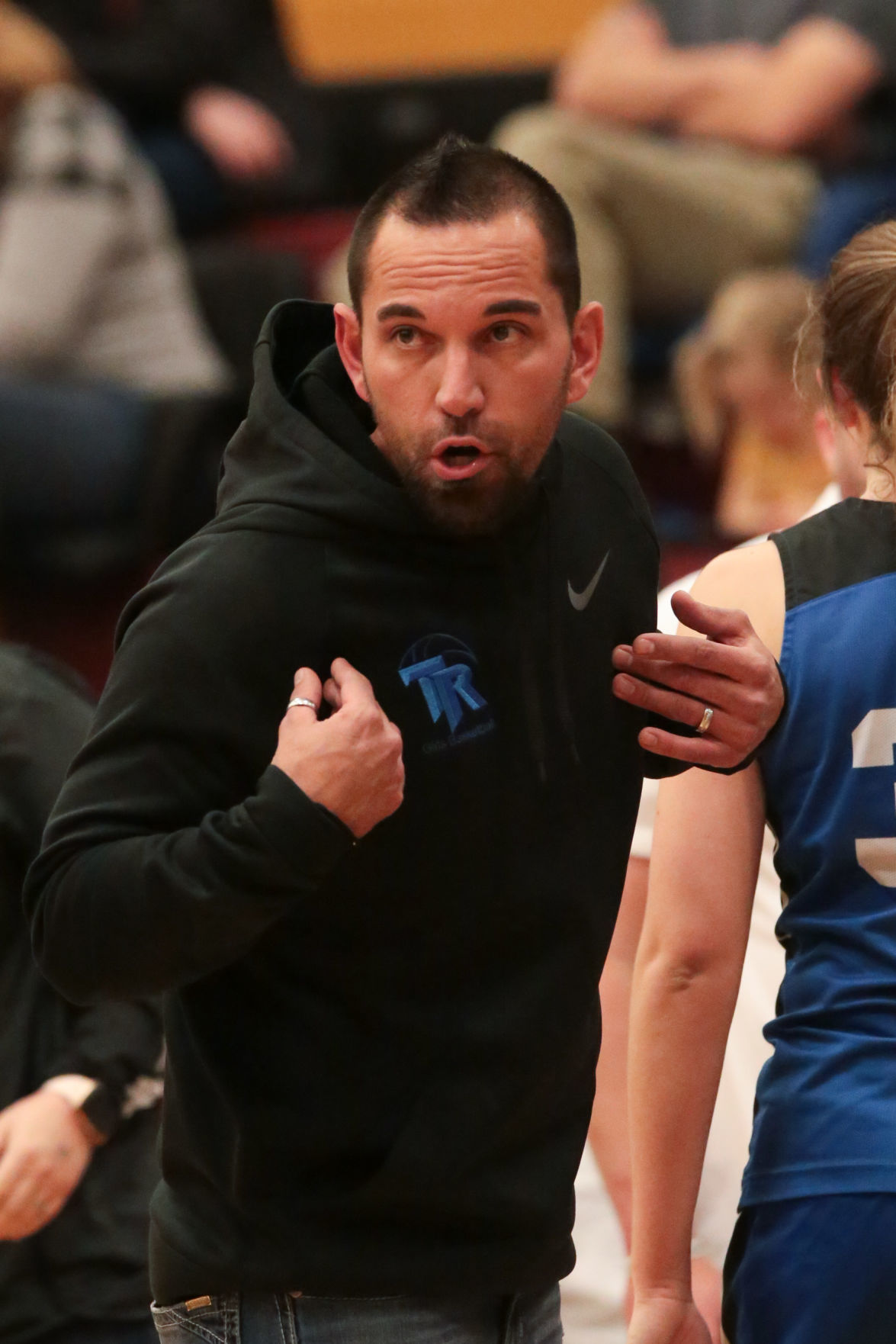 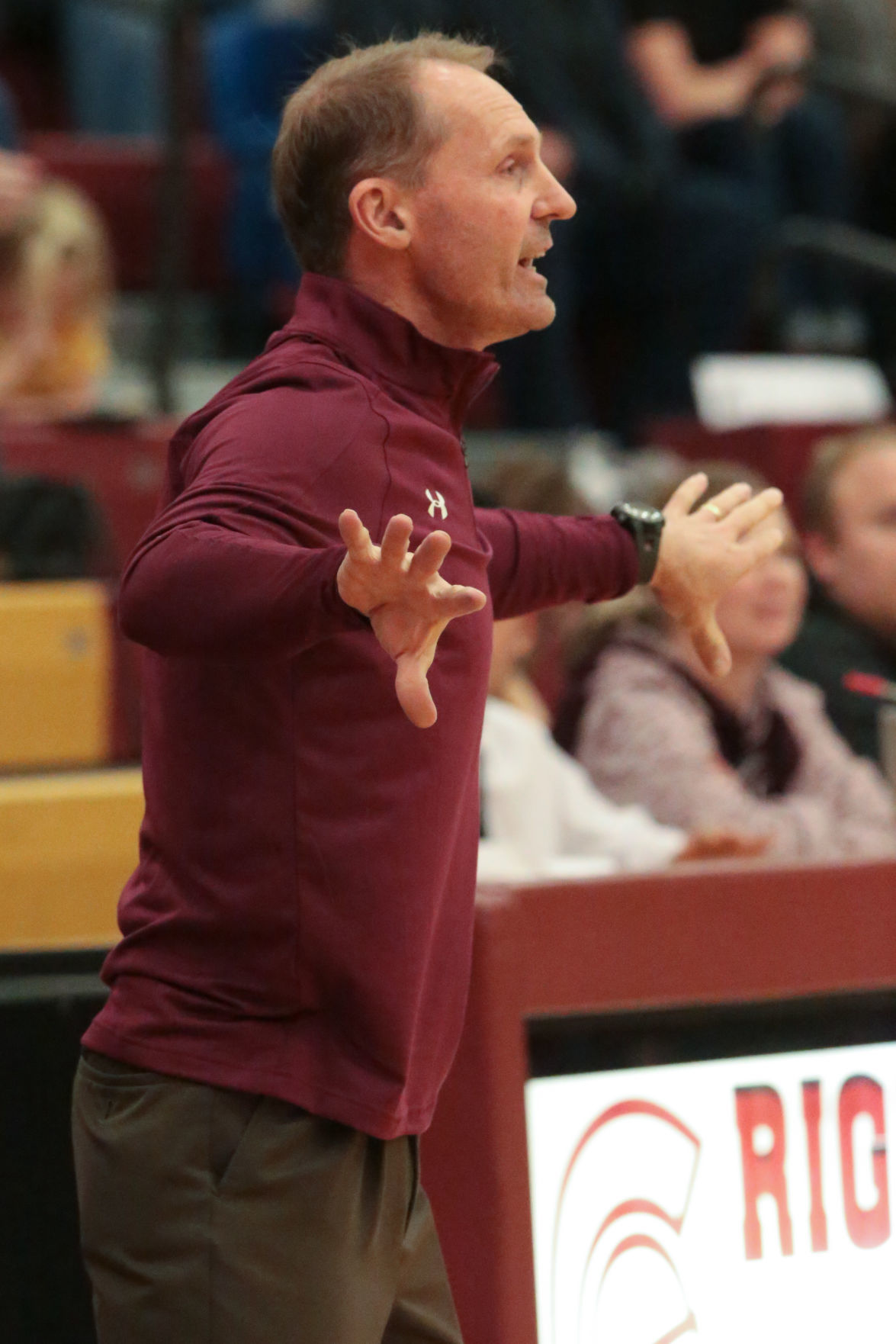 Rigby’s Ruby Murdoch drives to the basket in Wednesday’s game versus Thunder Ridge.

Thunder Ridge's Avery Turnage elevates for the shot in Wednesday's game at Rigby.

Rigby's Tylie Jones pushes the ball down the court during Wednesday's game versus Thunder Ridge.

RIGBY--Although the calendar and the snow covered sidewalks outside Rigby High School indicatedit was early December, the second half of Wednesday's girls basketball game had a late-season feel to it.

In their first meeting this season versus second-year program Thunder Ridge, Rigby won 61-51 to move to 2-0 in 5A District 5-6 play and 5-2 overall. The game featured six lead changes, 93 attempted field goals and a combined 14 made 3-pointers.

"It was intense," Rigby coach Troy Shippen said. "The girls were really fired up to play."

Bringing much fire for the Trojans was Ruby Murdoch, who fittingly was the last one holding the ball when the buzzer sounded. Murdoch, whose 15 points were one of three double-digit totals by Rigby on Wednesday, cheered and high fived her teammates after being fouled to set up two big 3-point plays in the third quarter. She completed both plays, the second of which put Rigby back in the lead 40-39 to end the quarter.

"Just penetrate and dish. That's what we were trying to do," Murdoch said. "And when you find an open lane, go for it."

There were plenty of big plays to go around Wednesday. In the first quarter, it wa a pair of 3-pointers by Lauren Davenport and a layup by Avery Turnage in the last minute to give Thunder Ridge a 12-7 lead. In the second quarter, it was a 3-pointer from Camryn Williams and two consecutive Murdoch buckets, the first a fast break off an assist from Tylie Jones and the second of which she made at the buzzer to put Rigby up 26-21 at halftime. The third quarter was raining 3s. By the 3:40 mark, Halli Smith, Aspen Caldwell and Sierra John had knocked down triples for the Titans and Jones and Brooke Donnelly had each made one for the Trojans.

Davenport, who finished the night with a game-high 25 points, went 4-for-10 from 3 Wednesday.

"You have to be on her as soon as she crosses half court," Shippen said. "She shot from 10 feet behind the line a few times."

The teams entered the double bonus in the fourth quarter, by which time at least one starter on each side was playing with four fouls. Davenport followed up a 2-for-2 trip to the foul line with a steal and a layup to bring the Titans to within 46-44 with 5:20 left in the game, but Thunder Ridge came no closer than four points the rest of the way.

Jones had 17 points and Donnelly added 15 for Rigby, which plays Friday at Upper Valley rival Madison. The defending 5A District 5-6 champion Trojans look a bit different this year with eight juniors on their varsity roster, and Murdoch said they have brought much intensity and energy to varsity.

"Last year's JV team, they were so intense," said Murdoch, who is one of Rigby's two seniors. "It's awesome. I knew coming in that we were going to be a defensive-minded team."

Spencer said rebounds proved to be the difference Wednesday, and the Titans look forward to their next meeting with the Trojans.

"We told them in the locker room, 'this is round one,'" Spencer said. "We definitely tip our cap to them and we'll keep getting better."