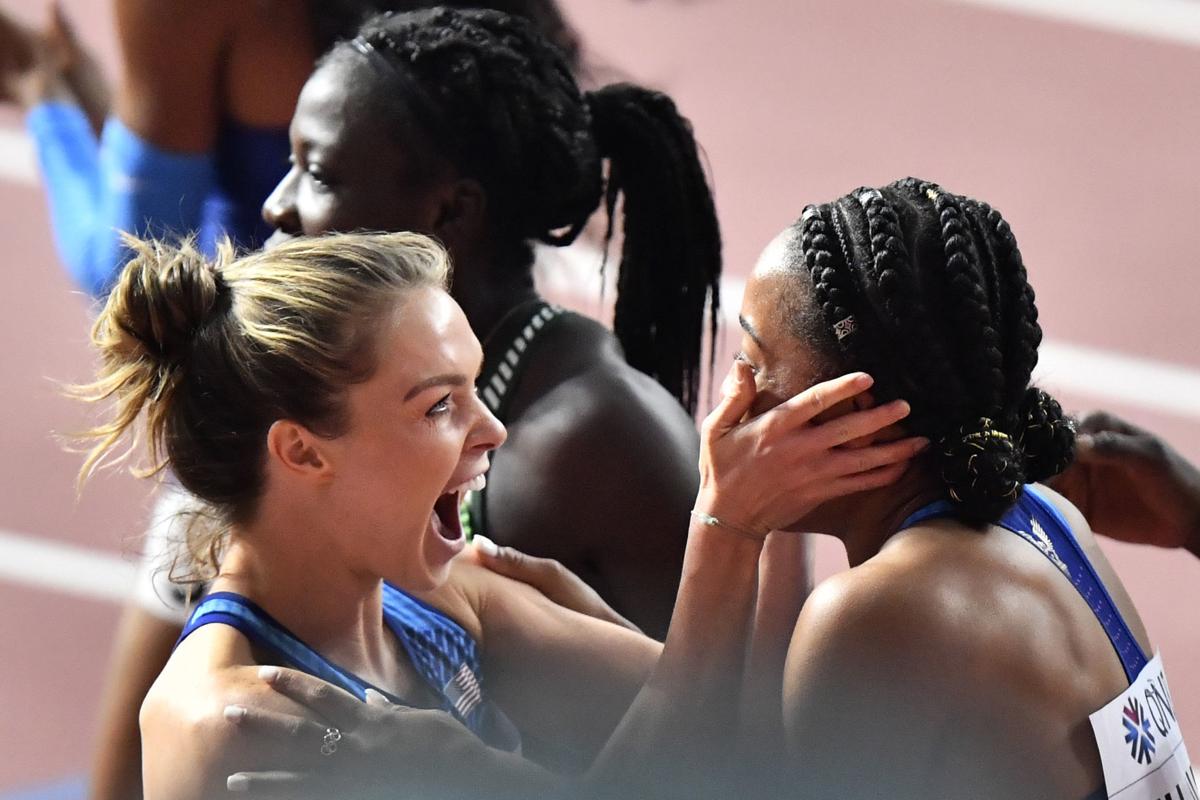 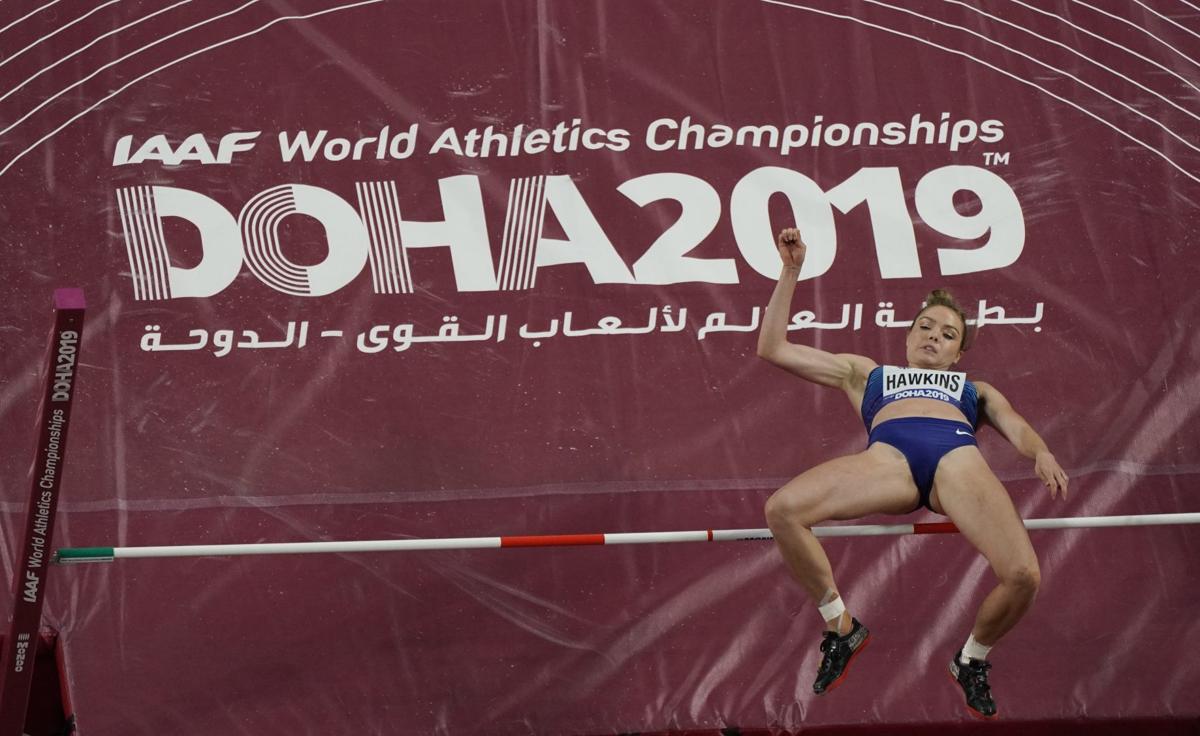 Chari Hawkins, of the United States, clears the bar during the high jump in the women’s heptathlon at the World Athletics Championships in Doha, Qatar, Wednesday, Oct. 2, 2019. 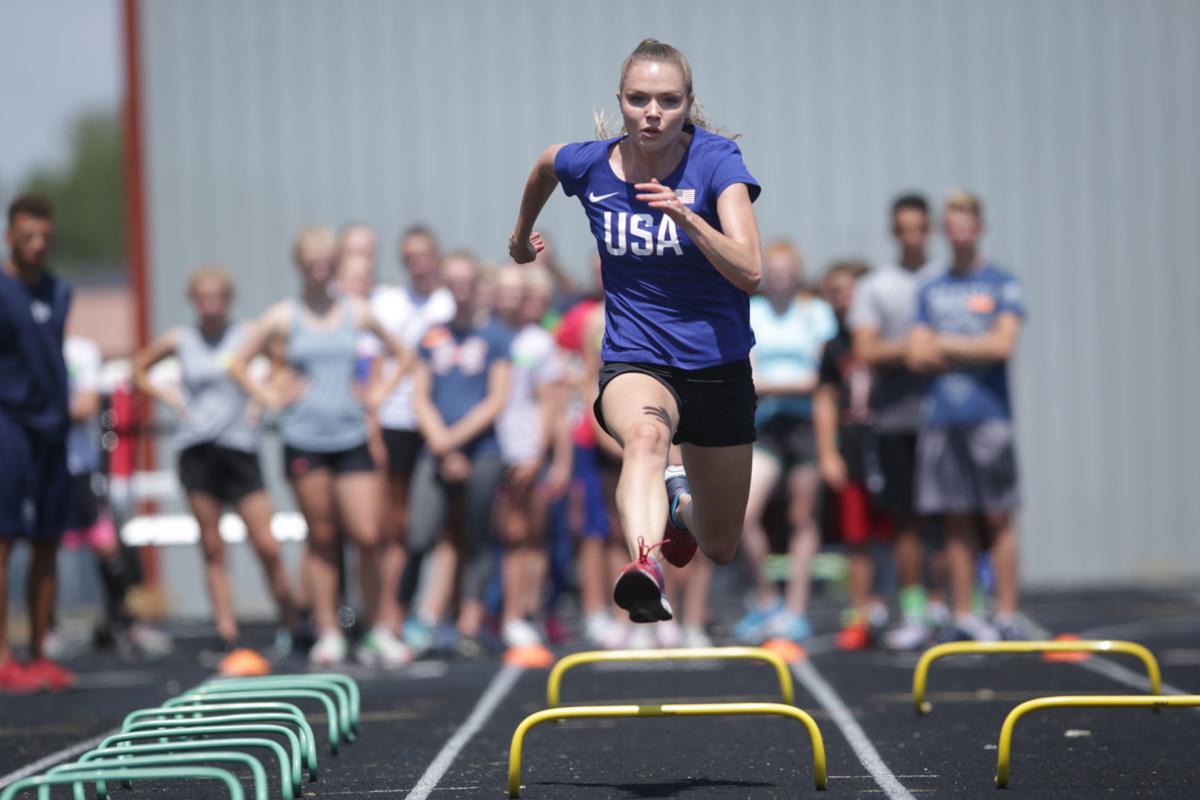 Above: Chari Hawkins demonstrates hurdling technique during a track and field camp at Madison Junior High School in July 2018.

Top: Chari Hawkins, of the United States, clears the bar during the high jump in the women’s heptathlon at the World Athletics Championships in Doha, Qatar, Wednesday, Oct. 2, 2019. 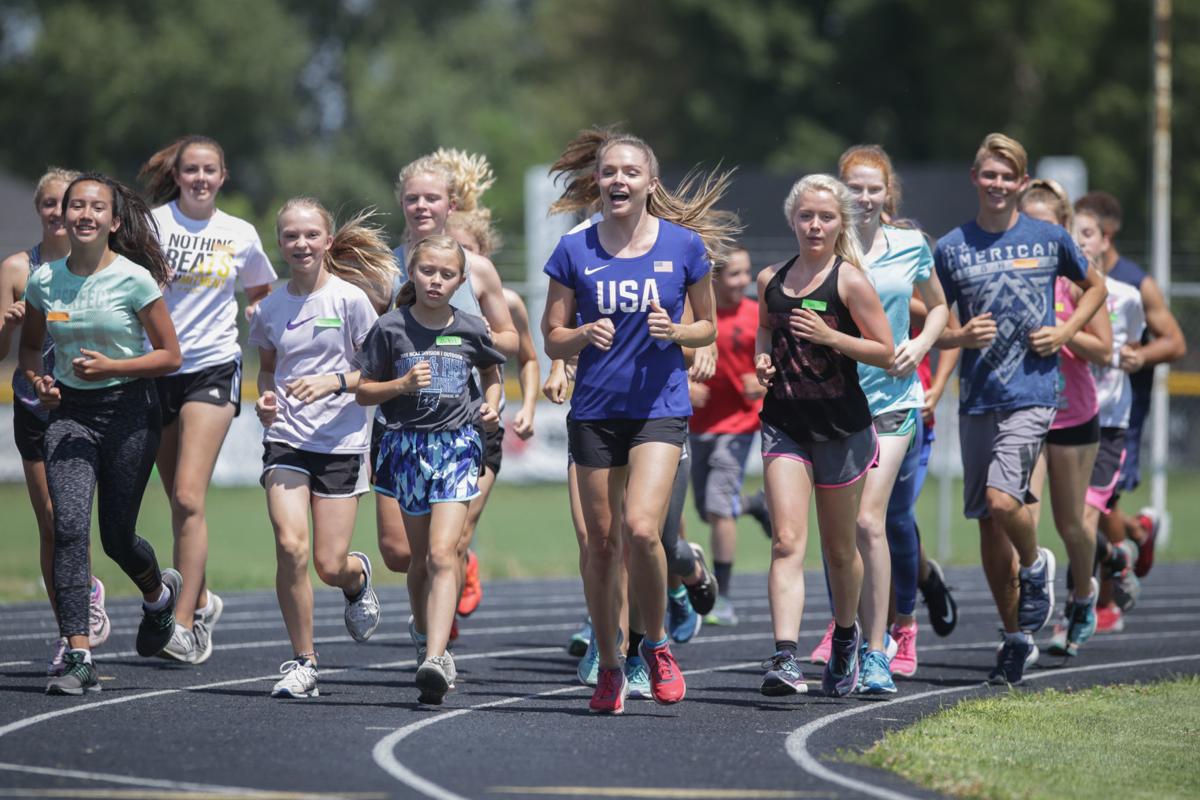 Chari Hawkins, of the United States, clears the bar during the high jump in the women’s heptathlon at the World Athletics Championships in Doha, Qatar, Wednesday, Oct. 2, 2019.

Above: Chari Hawkins demonstrates hurdling technique during a track and field camp at Madison Junior High School in July 2018.

Top: Chari Hawkins, of the United States, clears the bar during the high jump in the women’s heptathlon at the World Athletics Championships in Doha, Qatar, Wednesday, Oct. 2, 2019.

If 2020 had gone as planned, Chari Hawkins would be competing this week for a spot on the United States Olympic track and field team.

The U.S. Olympic Trials were scheduled to start June 19 at a newly remodeled Hayward Field at the University of Oregon with Hawkins’ event, heptathlon, concluding today.

The arrival of COVID-19 to the U.S. not only postponed the Trials, but the entire timeline for athletes aiming to compete at the Summer Olympics originally scheduled for next month in Tokyo. The status of the Games was settled March 24, when the International Olympic Committee and Tokyo Organizing Committee announced that the Games would be postponed to July 2021. By April 21, USA Track and Field had postponed the U.S. Olympic Trials for track and field to June 2021.

Hawkins said the postponement of the Olympics began as a rumor, then became a more realistic possibility once the NCAA men’s and women’s basketball tournaments were canceled. She and the other elite athletes who train under two-time U.S. Olympic heptathlete and current San Diego State head cross-country and track and field coach Shelia Burrell continued to follow their training schedules until they received definite word.

Upon learning the IOC’s decision, Hawkins described it as “almost kind of like a sigh of relief” because it ended the uncertainty. A strange short-term future awaits in the meantime with sports in flux, as she and other athletes who train under Burrell’s direction will not compete for the remainder of 2020. Hawkins said she began 2020 with a lengthy list of goals she wanted to accomplish, and now she is choosing to look at this additional year as an opportunity to get better.

“I think in hindsight, we’re all gonna understand that everything happens for a reason,” said Hawkins, a 2010 Madison graduate and a pro heptathlete since 2015. “At the end of the day no matter what, we can choose two things. We can choose to let everything happen to us or we can choose to proactively do something about it. It does take a lot of discipline to do what we do as athletes. To hold onto that discipline for a full extra year is quite a challenge, but you can take it as maybe you have the opportunity to grow in ways you never thought you could grow.”

‘We are in a good place right now’

Last July in Des Moines, Iowa, she placed third in heptathlon at the USA Track and Field Outdoor Championships with a career-best score of 6,230. That score and her world ranking of 17th landed her an invitation from World Athletics to represent Team USA at the world championships in October in Doha, Qatar. Due to the world championships taking place in the fall rather than the summer because of extreme heat in Doha, Hawkins had a small window of time to train before the Olympic Trials originally scheduled for this month. A top priority for 2020 was achieving the Olympic standard heptathlon score of 6,420, but so was getting healthy.

Eight days before competing in Doha and three days before leaving the U.S., Hawkins sprained her ankle and tore multiple ligaments. She re-sprained the ankle in Doha and competed having not walked, jumped or run on that ankle for a week, ultimately placing 12th with 6,023 points.

“When I went to Doha, I gave myself zero excuses,” Hawkins said. “Competing completely stale like that is difficult in itself. I learned a lot about myself. I learned I belonged on a world stage. I never thought it was a true thing before. I always thought I was inadequate and didn’t belong there.”

With the U.S. Olympic Trials originally scheduled for a little more than eight months after Doha, Burrell said 2020 would have had to be a “well thought out,” structured year for Hawkins. Burrell described the Olympic postponement decision as initially frustrating from a coaching perspective as it created questions on how to advise her athletes with no competitions on the horizon.

Three months into the “new normal,” Burrell said the extra time has allowed Hawkins to get her ankle evaluated, go to physical therapy and learn what she can do in practice as she continues recovering.

“We are in a good place right now, I think,” Burrell said. “The focus has been more technical on improving the events we know we need to improve. The advantage of not having to rush is really playing in our favor right now.”

With San Diego State’s facilities closed, Burrell and her athletes have had to get creative with finding places to train. Hawkins, who also completes workouts at home, said she meets with Burrell two to three times a week, goes to physical therapy three days a week and tries to leave home five days a week for physical activity, but the where and when are constantly changing.

“We’ve been kicked off tracks. We’ve been in parks,” Burrell said. “We’ve jumped over fences, been under fences. We try to not draw attention to ourselves.”

Hawkins said she is at a point where her ankle is ”very highly functioning,” but is not without pain. The next step is to become stable with no pain. She shared Friday on her Instagram account that she is having surgery Tuesday to reattach the torn ligaments. The recovery will be six weeks long.

“It’s gonna take a little bit of time to get back to where I was with fitness,” Hawkins said. “The great news is, I know how to get back there.”

In the two years since she began working with Burrell, Hawkins has attained personal bests and improved her mindset.

She got in touch with Burrell through a mutual friend, Gwen Mikinski, in July 2018 at the Pan Am Combined Championships in Canada. Hawkins had spent the previous year in the United Kingdom studying at and competing for the University of Bath and was looking for a new place to train in the U.S.

Burrell, who remembered seeing Hawkins compete for Utah State University, said Hawkins came to San Diego 100 percent committed, and they spent their first year working together to redirect her energy.

Perhaps the best example of this was when Hawkins placed third with 6,230 points at last year’s U.S. Outdoor Championships.

“My coach said, ‘I love where your head is at, but I want you to keep it to yourself. You’re literally glowing, but you’re giving it away. I can see other people being energized,’” Hawkins said. “From the outside perspective, it seemed, ‘Oh, Chari has quieted it down.’ I was internalizing all my joy. It allowed me to be very consistent with all my events. That’s when the biggest score of my career came out.”

Hawkins also made a commitment last year to tackle a persistent struggle: performance anxiety. At every heptathlon or pentathlon she competed in from 2011 to February 2019, she had a panic attack. Some were so severe, she pulled her hamstring or cried under the scoreboard tent. In February 2019 at the Hypo Meeting in Götzis, Austria, she told herself and her parents she refused to have another panic attack in a competition, and she began researching and asking around about how to cope with anxiety.

She now believes it is important to share her story.

“I could’ve retired so many times,” Hawkins said. “Every competition, I was like, ‘I freaking hate this.’ I put so much pressure on my existence based on my performance. If I didn’t do well, I wasn’t a good person. Once I had that ‘aha’ moment (at Götzis), that really changed everything for me. Talking about it helps me understand it, and I think it could help other people.”

With competitions on pause and Olympic qualification for track and field not permitted until December, Hawkins’ summer is much quieter than originally planned. Her parents, Bill and Peggy, had planned to fly to Italy earlier this spring to watch her compete and attend the U.S. Olympic Trials this month. Like Burrell, Bill believes the additional time is in his daughter’s favor.

“It’s a blessing in disguise,” he said. “I tell that to everyone I see when they ask, ‘How’s Chari?’ I think she’s gonna be ready to do something really special.”

Burrell and Hawkins agreed that competition for 2021 U.S. Olympic team spots will be intense. Last year’s Outdoor Championships showcased how deep the U.S. is in multi-event competition, and Hawkins is not the only athlete making use of an extra year of preparation.

Burrell said Hawkins loves spending all day on the track, and competing in Doha was a confidence booster as she continues working toward Tokyo.

“The first thing you have to do is be at the show,” Burrell said. “You have to look around and go, ‘I belong here.’ The next thing is, you want more. If there was a character or whatever for somebody who 100 percent was committed to, ‘I’ll do anything and everything I can to get better and achieve my goal and be the best I could be,’ Chari took that head on and embraced it. There’s definitely more in the tank, that’s for sure.”