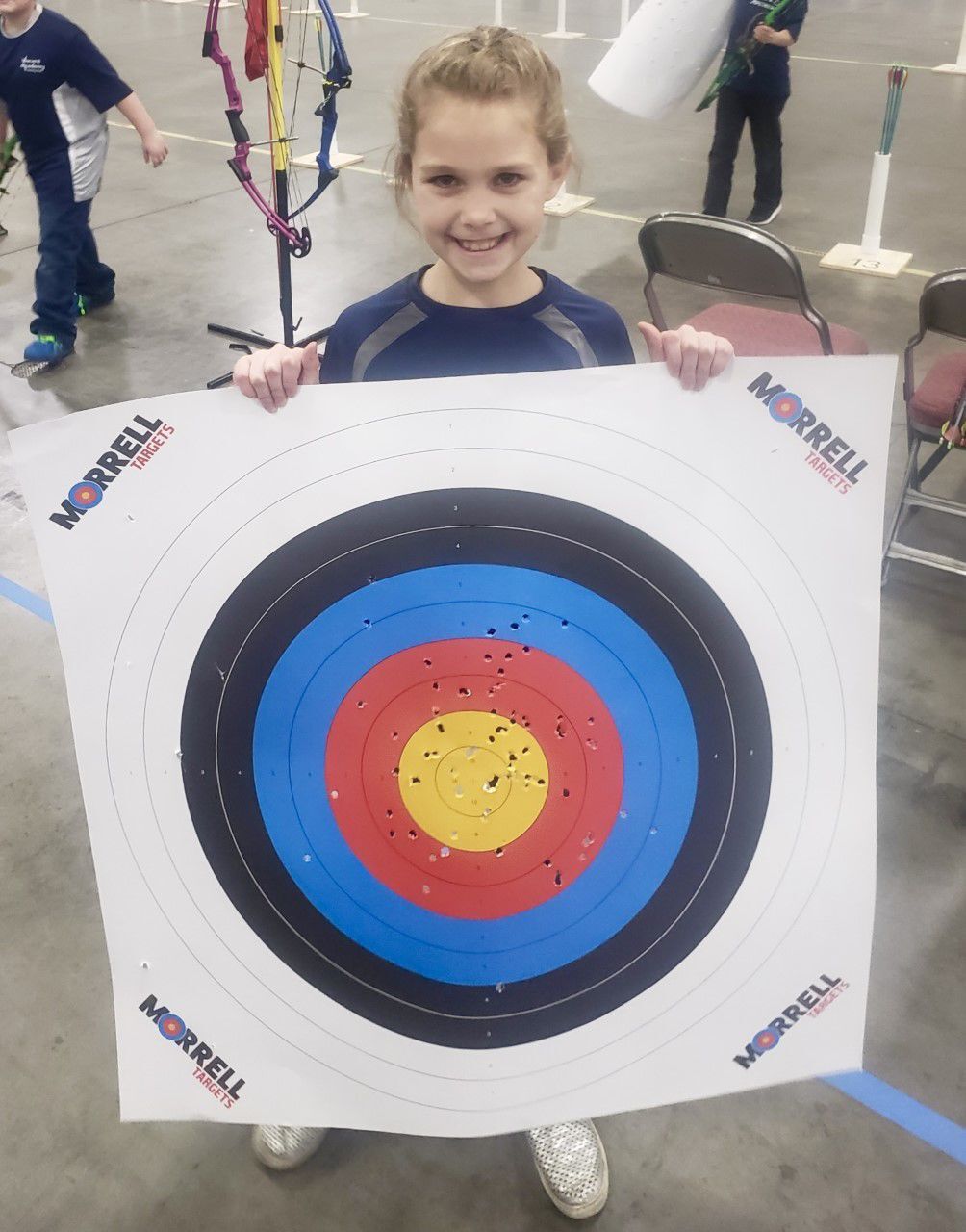 Hallie Huntsman, daughter of Josh Huntsman, shows off her target at archery practice. Hallie previously placed third in the state of Utah in the Elementary Division in 2020. 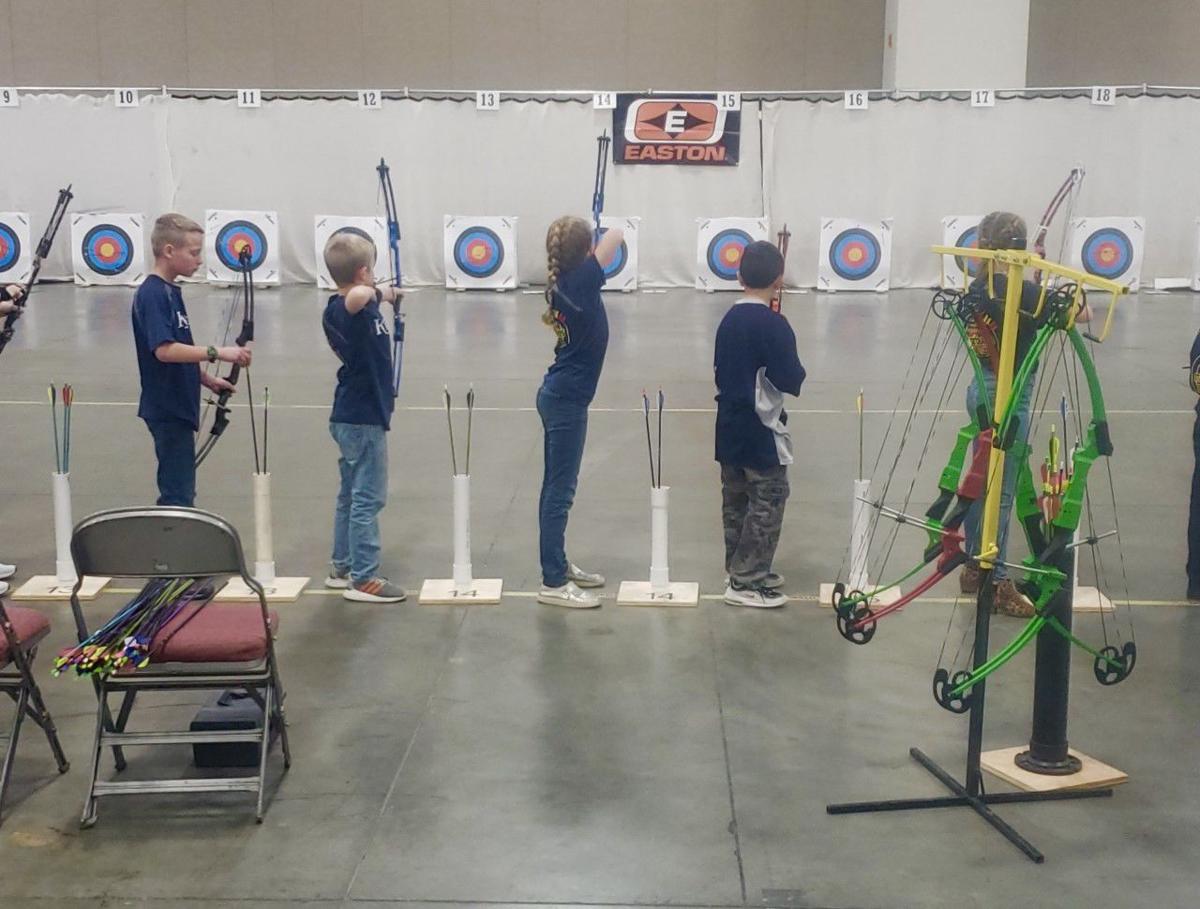 Hallie Huntsman, daughter of Josh Huntsman, shows off her target at archery practice. Hallie previously placed third in the state of Utah in the Elementary Division in 2020.

Josh Huntsman approached the Ririe School Board with a proposal to begin an archery club.

Huntsman stated that he wanted to start doing archery in his physical education classes as a part of the curriculum with in-classroom instruction covering safety, whistle commands and more.

Huntsman is a certified archery instructor and asked the board to consider funding the purchase of some basic equipment costs. Superintendent Jeff Gee stated that the approximate cost of the equipment Huntsman is looking for is $$3,234 for the equipment package, not including the grant that has been offered to Huntsman.

Huntsman stated that NASF has offered a $1,000 grant and that the equipment would be property of the school.

According to the draft minutes from the school board meeting, Trustee Brigham Cook asked if students have been polled to see if there is an interest, to which Huntsman stated that he did poll his PE classes and that 90% said they would like to participate. Treasurer Tim Sopalski commented that he did this as a youth and it taught him a lot personally.

In an interview with The Jefferson Star following the meeting, Huntsman stated that he got to experience archery club through his children while living in Utah.

Huntsman said where they lived in Utah, there was a strong tradition of archery at the elementary and middle schools where his daughter and son were able to compete and attend Nationals. Huntsman's daughter placed third in the state of Utah as a fifth grader.

"When the time came around this year, my daughter came to me and said 'dad, we don't have a team,'" Huntsman said. "Her two best friends that she competed with in Utah were placing and she said she could've been right there with them because they shot the same. I want to provide not only for my kids but for all kids the chance to experience something they wouldn't usually get to."

With the club portion, teams are done at the elementary level (fourth and fifth grade), junior high (sixth through eighth grade), and varsity (freshman through senior year). The school board approved the purchase of the equipment, which will stay with the schools.

"We'll start it in the classes and then look to starting a club where the kids can compete for state championships next year," Huntsman said.

Huntsman said he's been working closely with the instructor at South Fremont High School in St. Anthony, as they already have a team. He stated that they were working together to encourage the program in even more local schools in order to hold competitions.

"It just promotes a lot of good things within the education realm," Huntsman said. "You see kids you don't usually get to see – you pick up kids that are athletes, from band, drama, hunters – that maybe wouldn't be involved in an extra-curricular like this come together."

Although the archery classes are starting fresh in Ririe and things are being implemented slowly, Huntsman hopes to try and build the program and get a few more schools on board.

"We live in an area where there's a lot of people that love hunting and target shooting," he said. "I just know there needs to be more places for kids to do this. We're not doing it for glory or anything like that, we just want kids to be able to participate in something that's cool and fun. Even for me at 41, just the thrill of hitting the bullseye is fantastic. Watching kids' faces light up and grow in the sport, that's just a fun thing to watch."

Huntsman said the equipment was ordered March 31 and he expects it to arrive in the next four to six weeks. The classes will be first implemented at the seventh and eighth grade level, which is where Huntsman teaches. As the program grows and expands, Huntsman said they will eventually purchase another set and increase the number of certified instructors they have.

"I really want to look at it for all levels," he stated. "The big thing is when we set curriculum, we'll look for PE teacher that are certified and can implement the program at the high school as well. I just want it to be fun and to have students grasp onto it and grow with it."