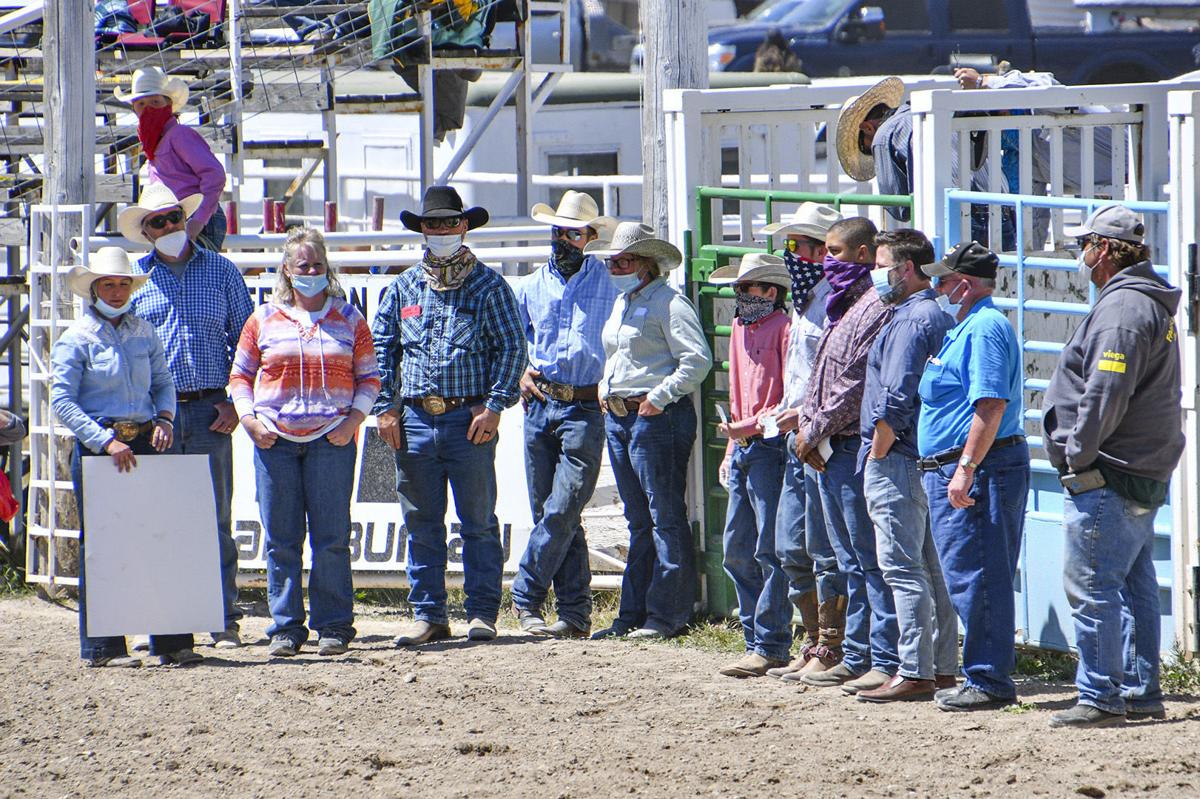 The District 7 High School Rodeo took place May 7 to May 9, with 301 kids competing May 9. Most of the participants reside in Rigby. Spectators and participants sported masks and were told to physically distance as a precaution amid the COVID-19 pandemic. 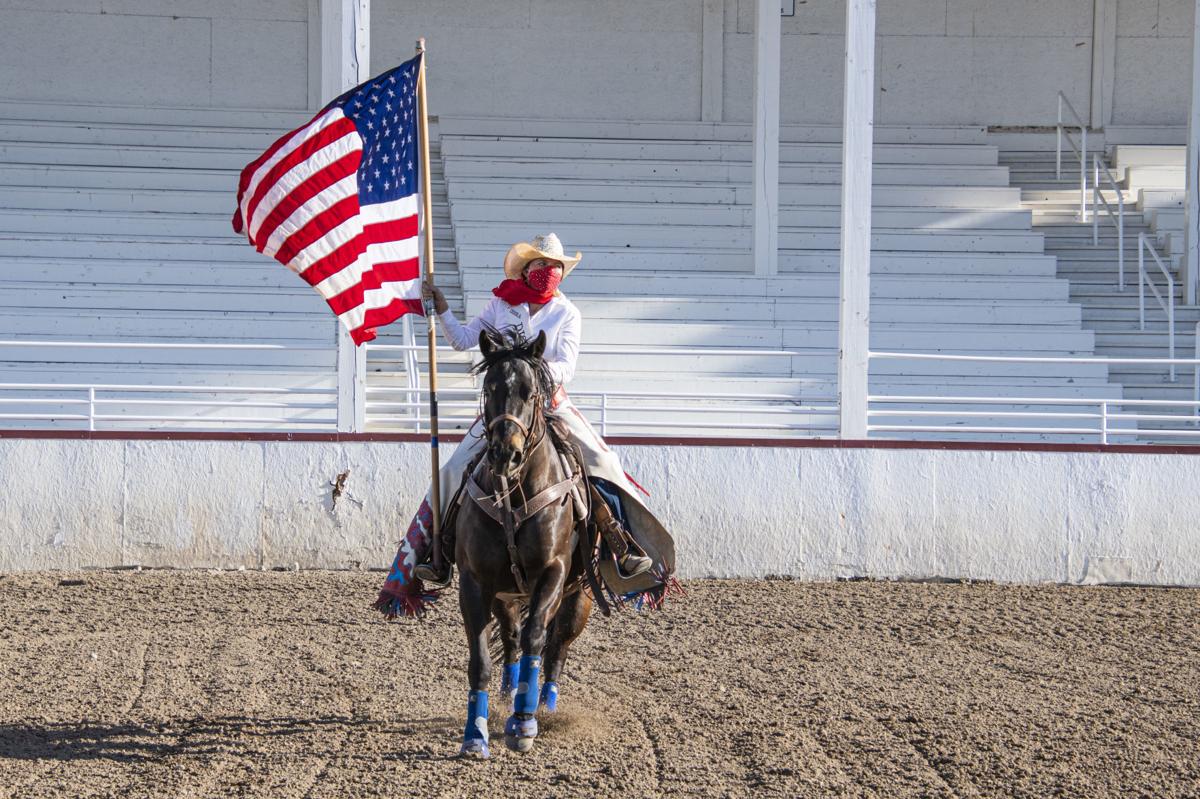 District 7 Rodeo Queen Shayle Warner sports a bandanna and presents the United States Flag with empty grandstands behind her.

The District 7 High School Rodeo took place May 7 to May 9, with 301 kids competing May 9. Most of the participants reside in Rigby. Spectators and participants sported masks and were told to physically distance as a precaution amid the COVID-19 pandemic.

District 7 Rodeo Queen Shayle Warner sports a bandanna and presents the United States Flag with empty grandstands behind her.

Geri Rackow from Eastern Idaho Public Health spoke to Jefferson County Commissioners May 11 about the District 7 High School Rodeo that took place May 7 through May 9.

Rackow stated that she received a copy of the organizations plan for the rodeo and while they seemed reasonable, she still has reservations on large gatherings in the beginning stages of reopening.

According to the Rebound Idaho plan, public gatherings should still be avoided. Groups of less than ten can begin meeting in Stage 2 while continuing physical distancing, and groups of ten to 50 can begin gathering in stage three, which starts May 30. Gatherings of more than 50 people may begin June 13.

Jana Day with the District 7 High School Rodeo reported the number of contestants from May 7 through May 9: Thursday had a turnout of 194 contestants, Friday had 187 and Saturday had 301 participants.

Rigby Mayor Jason Richardson approved the use of the Rigby rodeo grounds, stating that requirements were put in place to continue distancing.

Families were told to sit together and to leave space between any other spectators not with their group, along with encouraging rodeo participants and spectators to wear face masks or bandannas.

“I was surprised at how ubiquitous it was with people wearing masks,” Richardson said. “These are farmers, ranchers and cowboys all wearing masks.”

Richardson is also allowing for the District 4 High School Rodeo to utilize Rigby’s grounds each weekend starting April 16 until June 6.

Andrea Beasley’s daughter Harley, a District 4 participant, has been doing rodeos since she was five and is currently a junior in high school. Andrea doesn’t think the District 4 rodeo will be quite as big as District 7, but they also don’t have as many rodeos as District 7.

Caylee Bradshaw, Student President of the Idaho High School Rodeo Association, posted the the IHSRA Facebook page May 8 saying that the boards should consider several factors when making the decision to rodeo or not.

“Some may say we are young, that we don’t understand the rules, or the impact of our choice,” Bradshaw wrote. “Truly, do any of us fully understand it? As leaders we need to keep it so that we don’t individually decide which is the best choice for ourselves. Completely canceling rodeos takes away choices and effects every member in this organization leaving them with only one option.”

Bradshaw listed the contributions of sponsors and parents as well as the work of seniors who she said deserves the chance to perform one more time.

Brent Robertson of the District 7 High School Rodeo board said they spoke to several different entities before deciding to move forward with the rodeo including the Lieutenant Governor’s Office, Mayor Jason Richardson and getting feedback from EIPH.

“We had a plan of attack going into it,” Robertson said. “For the most part, we followed the guidelines pretty well and I think the kids were safer here than if they were at Walmart.”

In terms of current case numbers in the health district, cases of COVID-19 rose from 64 to 70 from May 7 to May 9. Jefferson County continues to sit at five cases.

“We expect to see new cases as the state opens up,” Rackow told commissioners. “The goal isn’t to have no cases but to manage the cases we do get as to not overwhelm hospitals.”

Rackow stated that from a public health standpoint, she did and still does have concerns with large numbers of people gathering, especially in light of the current Governor’s orders.

“It goes back to just bringing that many people together increases the risk for infection,” Rackow said. “The protocols for youth activities outline that large gatherings are excluded, and from a public health standpoint, gathering increases the risk of spread.”

Jordan Watters, the Chief of Staff from Lieutenant Governor Janice McGeachin’s office, stated that they had correspondence with the Governor Brad Little’s office on clarification for rodeos, as they received calls on whether they were allowed or not.

McGeachin sent an email May 2 giving her support for the rodeo to proceed as planned.

Watters reached out to Little’s office May 4 asking for clarification.

The governor’s office replied to Watters that regular rodeos fall under large venues in Stage 4, which begins June 13, and youth and high school rodeos should follow the youth activity protocols in Stage 1, which restricts large events like competitions as well as travel from outside one’s community.

Richardson stated that there have been no restrictions keeping people from traveling to Rigby during the COVID-19 stay-at-home orders and closures, so allowing the District 4 rodeo to take place in Rigby would not be an issue.

District 7 plans to rodeo for the next three weekends in Rexburg twice and again in Rigby.

Shayne Young, Jefferson County Commissioner and county representative with EIPH, stated that while the county did hear about the rodeo, the grounds are owned by Rigby, giving them no jurisdiction in the matter.

“I think there’s always a concern,” Young said in regards to other districts traveling to the area. “We would like to suggest they keep the names of everyone that comes to the rodeos, but there’s a concern.”

Richardson stated previously that the city of Rigby did not declare a local state of emergency in response to COVID-19, as he felt they would fall under the county’s declaration.

Declaring a state of emergency would allow for a city to take necessary precautions as well as qualify for state and federal funds set aside to assist with costs associated with COVID-19.

The results for the District 7 High School Rodeo from May 7 to May 9 can be accessed at d7ihsra.com/results.html.