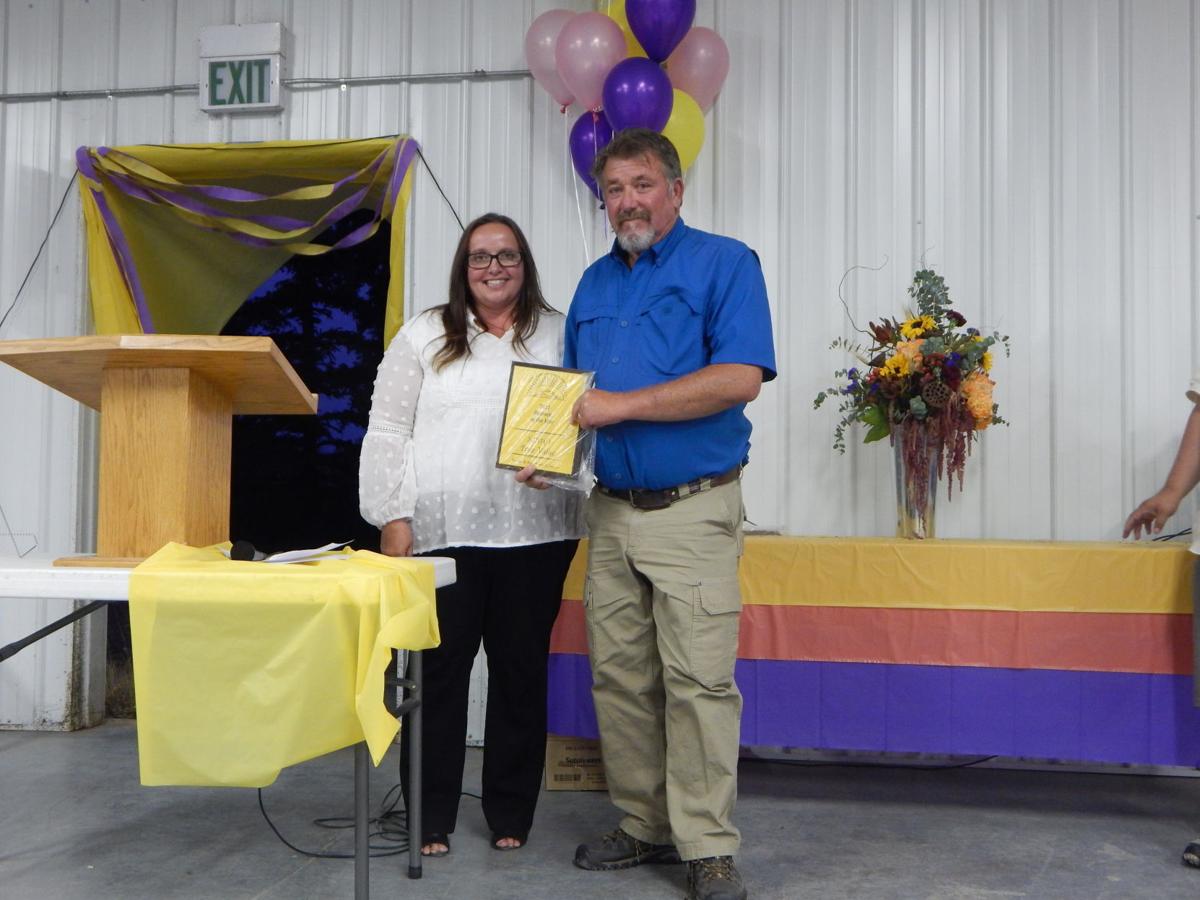 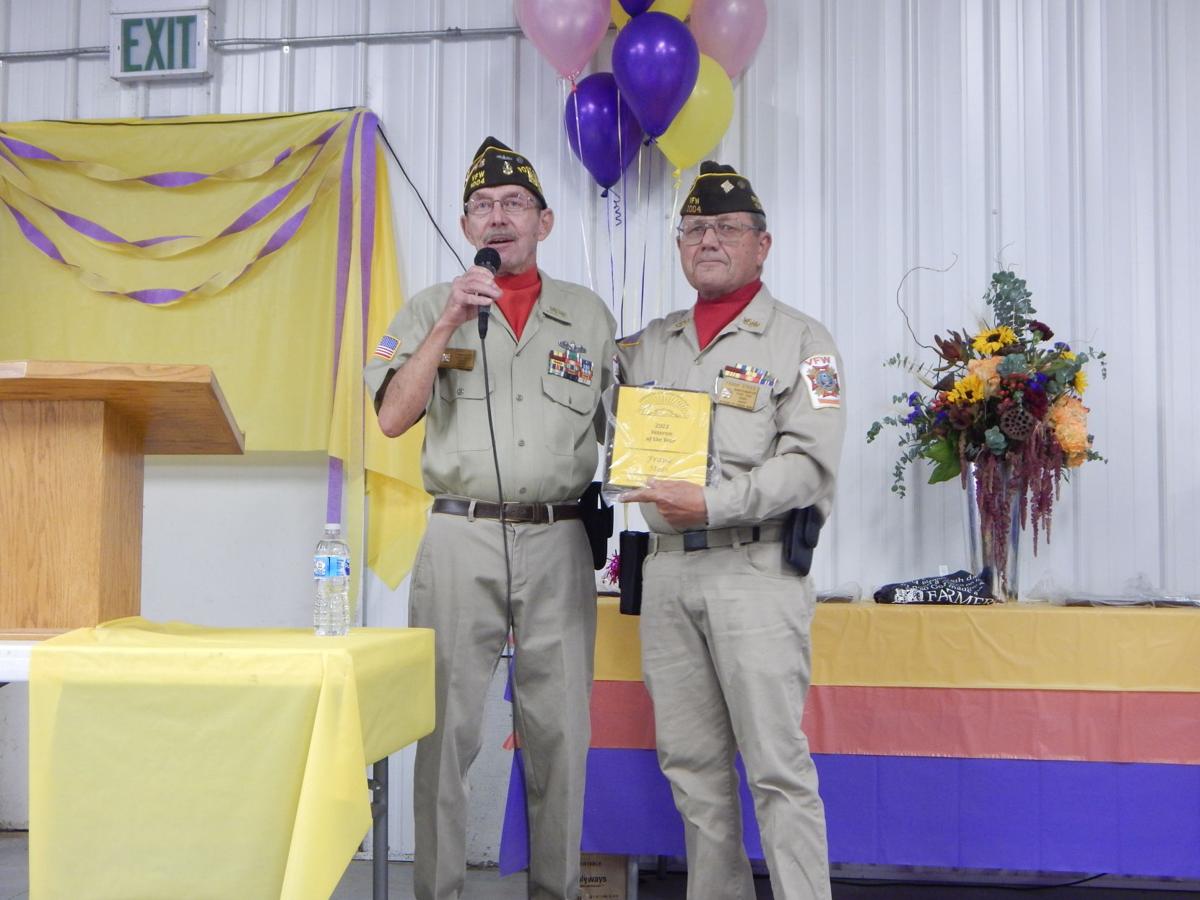 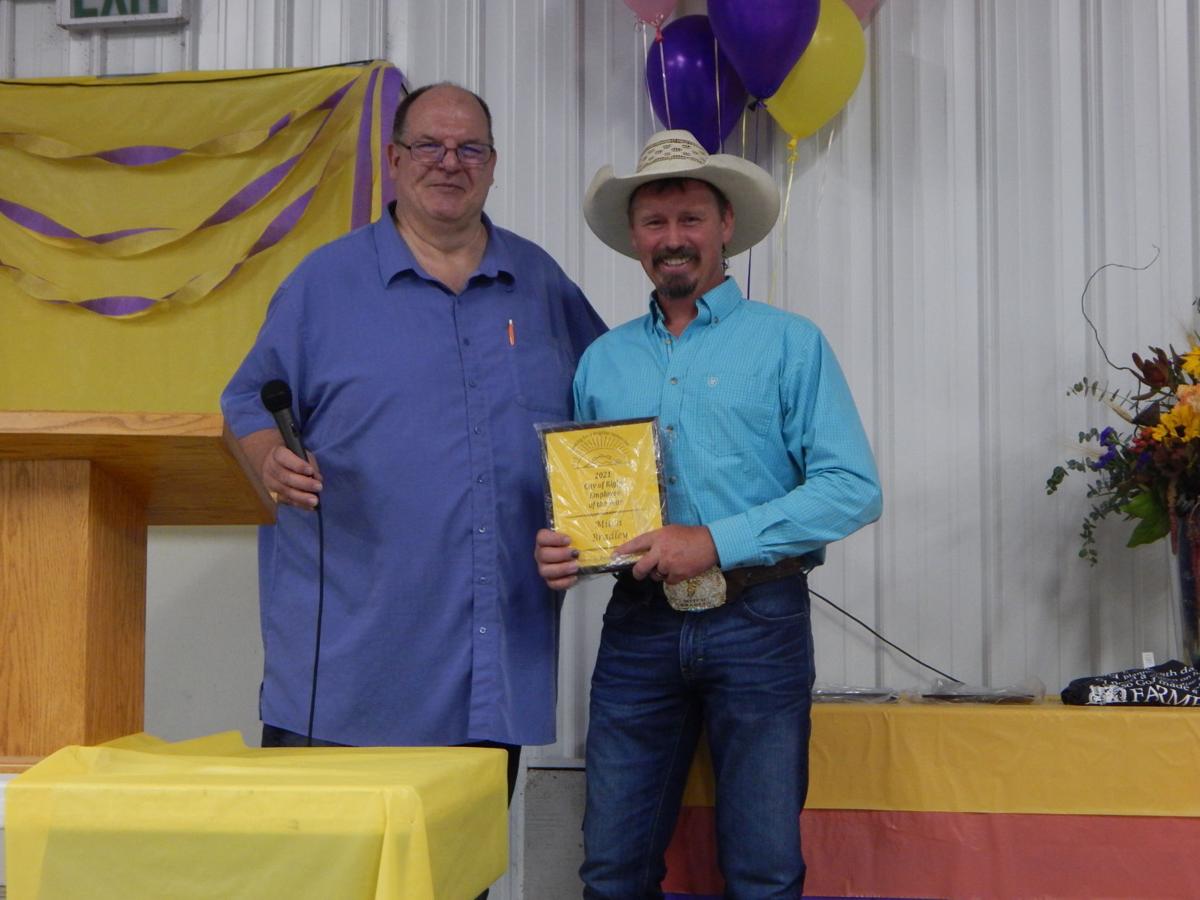 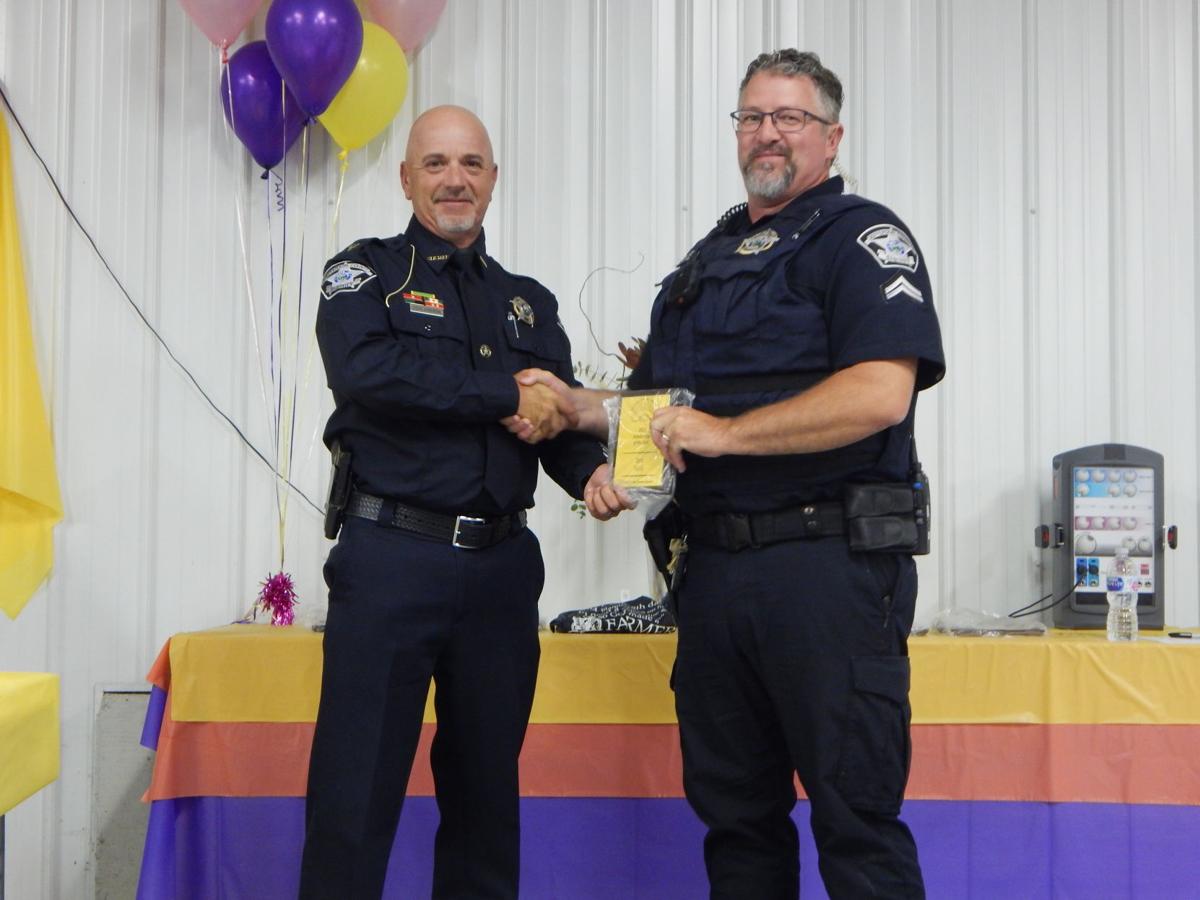 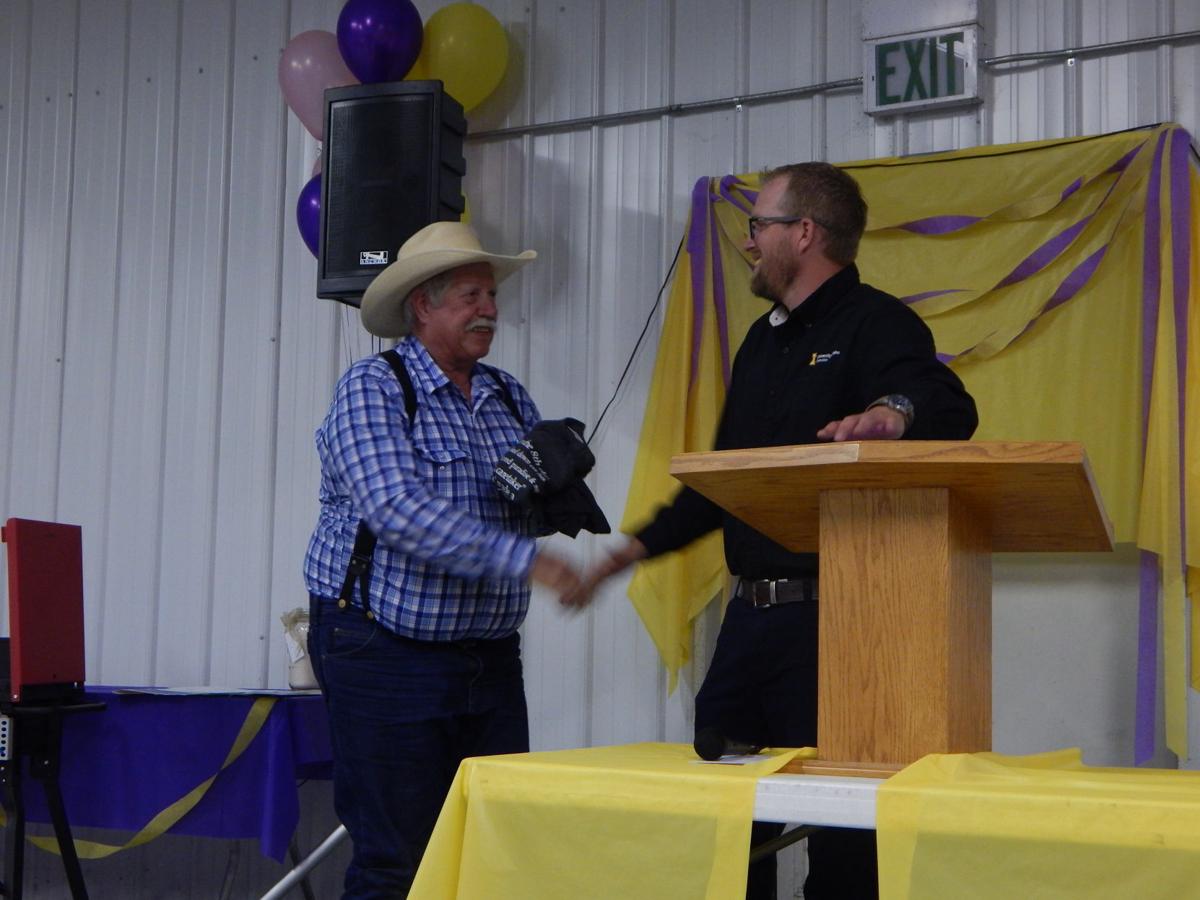 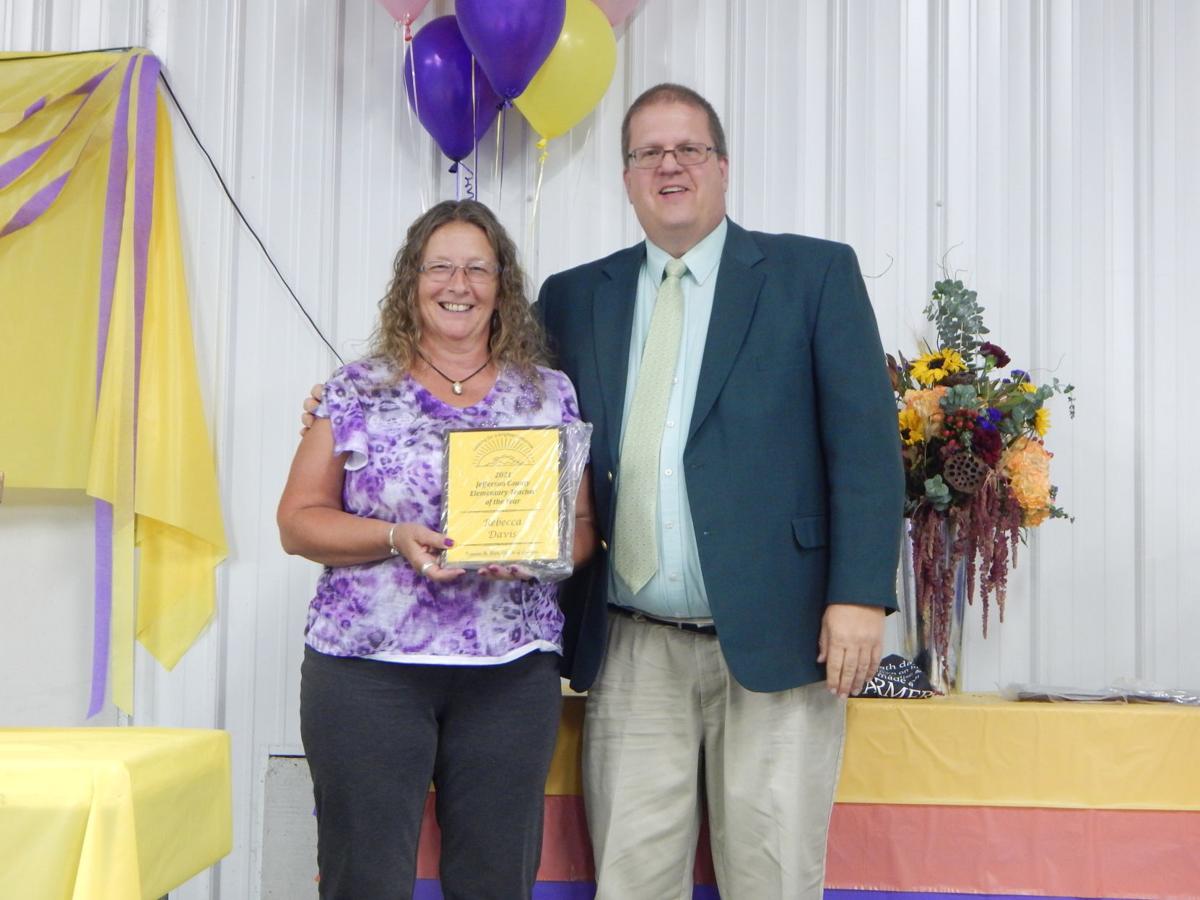 Gary Comstock presented the Elementary Teacher of the Year award to Rebecca Davis. 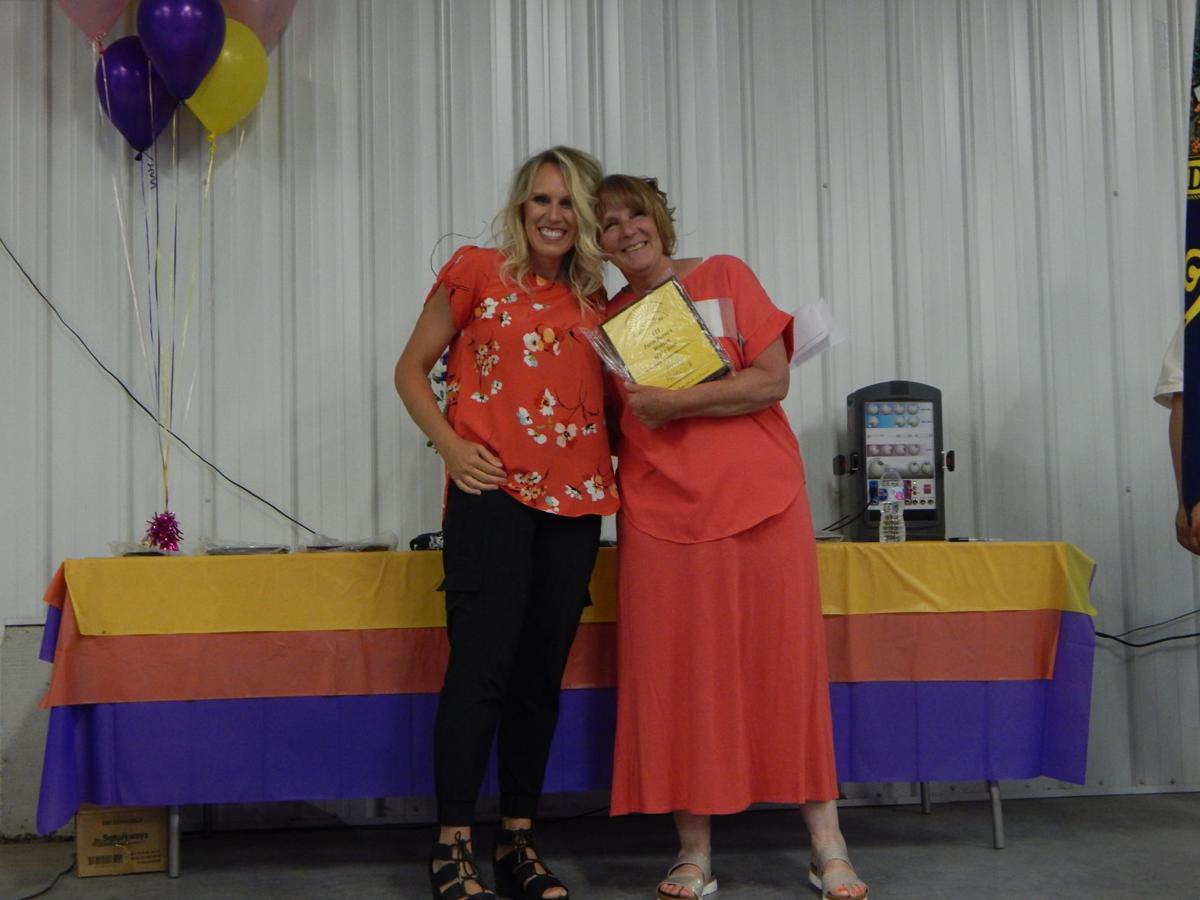 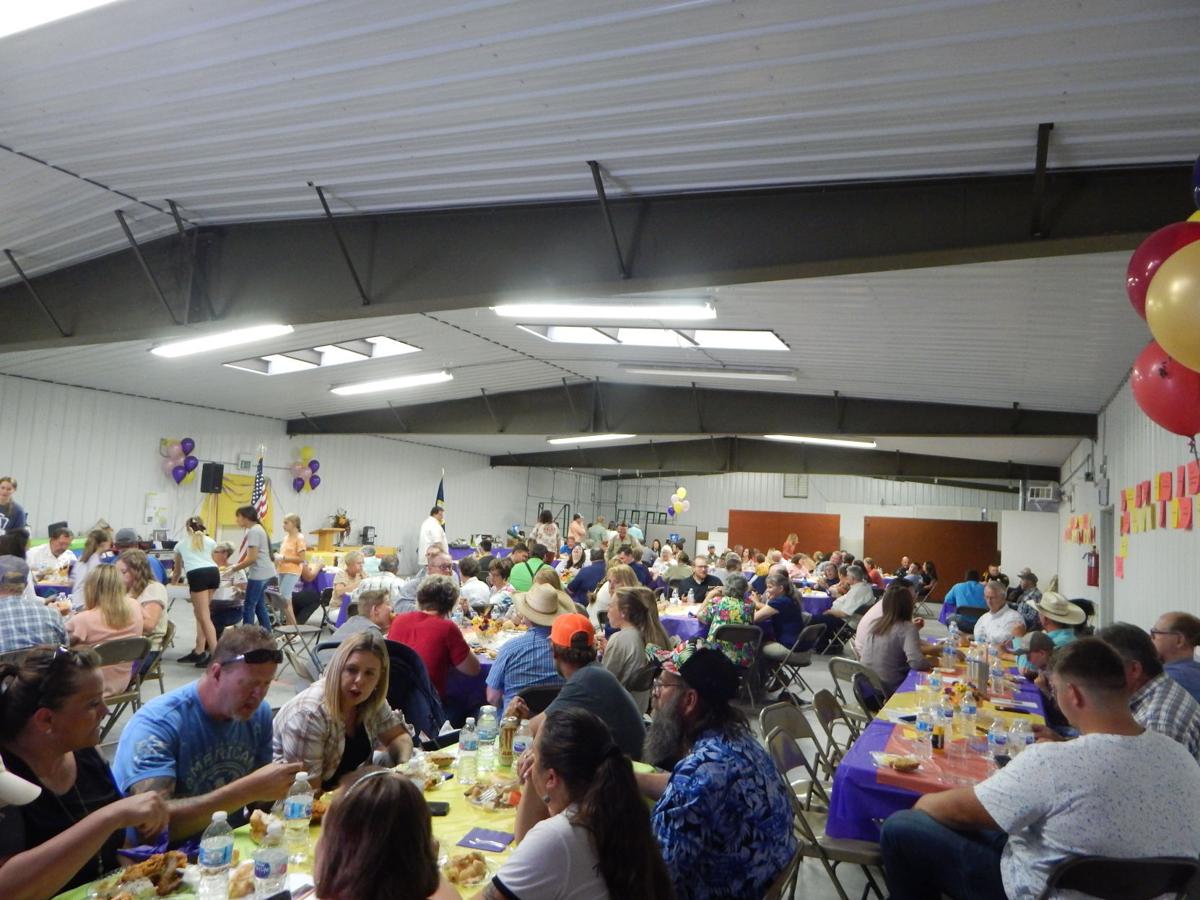 Jefferson County locals come together during the Rigby Chamber of Commerce Farmers-Merchant Banquet to have dinner and socialize during a live and silent auction and commemorate recipients of this year’s awards.

Gary Comstock presented the Elementary Teacher of the Year award to Rebecca Davis.

Jefferson County locals come together during the Rigby Chamber of Commerce Farmers-Merchant Banquet to have dinner and socialize during a live and silent auction and commemorate recipients of this year’s awards.

The Rigby Chamber of Commerce held their annual Farmers-Merchant Banquet on Thursday, July 15 at the Jefferson County Fairgrounds.

The MC for the evening was David Crasper, and the live auctioneer was husband and wife team Kurt and Becky Coates. There was also a silent auction for those interested in bidding on items on a piece of paper.

The beginning of the night started with the invocation given by Seth Bagley and the dinner was catered by Broulims with service provided by the Rigby Church of Jesus Christ of Latter-day Saint Young Women.

“We’re going to celebrate you because of your influence to affect people’s lives for the better,” said Crasper about the award recipients.

Before the live-auction began, Crasper asked the crowd to raise their hands to make sure they knew how to bid. Items that were auctioned off were donated by local businesses.

Crystal stated service has always been in the family when it comes to the Scotts. Keith Scott served in the army from 1943 to 1946, served in the VFW as the District and State Commander, and served as Mayor on the Rigby City Council from 1968 to 1982.

Keith opened his first business in Ucon in 1947 and then moved the service station to Rigby in 1950. “Scotty,” as he was called, opened his first auto parts store in 1981, and over the next two years grew out of that location and moved into the store across the street in 1983. In 2003, the rental store was purchased as well as the main store getting added onto.

Crystal stated service in the Scott family continued for many years and many generations. Scotty’s has quickly gained the reputation of having the best hardware selection in the state and is in the Top 5 in paint sales in the region.

“Scotty’s True Value and Carquest is still thriving and practically bursting at its seems to provide this community with everything from auto parts, to plumbing, to hardware, to the garden center,” said Crystal. “Kirk and the gang cannot thank you enough for the support through the years and appreciate letting them serve you for the last 40 years!”

Justin’s ah-ha moment for soil conservation came while watching a Ken Burns video on “The Dust Bowl.” He couldn’t help wondering why the people didn’t try something different when their current practice obviously wasn’t working, while also thinking how much the images resembled a Hamer spring wind. Place networks with farmer-friends in Texas and other areas where water shortages are even more prevalent than in southeast Idaho. Place adapts their successful practices to help tame his own spring-wind sandstorms in order to improve his crop production and soil health.

Place served on the Farm Service Administration County Committee here in Jefferson County before beginning his service on the executive board, and as representative for Jefferson County, with The Idaho Grain Producers Association.

Hendren grew up in North California, and participated in 4-H for his entire life, roping his two daughters into participating as well with swine, goats, and other animals along the way.

Stees served in the Navy in naval aviation and was a jet mechanic. Stees is also a Vietnam veteran and served in 1962 before it became the vietnam war. He was in Cambodia before he went to Vietnam. Stees helps at the Senior Center in Ririe every Friday and every spring he drives a truck for The Church of Jesus Christ of Latter-day Saints farm in Ririe. He’s all about funerals and will always lend a helping hand. He’s the Post Quartermaster and takes care of all of the VFW finances, which is a huge job.

He’s the neighborhood mechanic; anybody that doesn’t have a car or ATV that isn’t working, the community knows to call on Frank.

“If you give him a call, he shows up,” said Roy. “He helps with any project, and he’s always the first one there.”

Hancock’s first taste of Agriculture was when she met her husband. He told her he was hauling sunshine; it was anything but sunshine. Sunshine is manure.

Hancock traded her heels for tractor wheels. She and her husband have expanded their 80 acres into 1,000 acres with a herd of cattle.

The Chamber of Commerce Scholarship recipients were Blake Anderson and Ben Wells. Both received a scholarship worth $1,000 that was presented by Theresa Anderson. Blake will be attending Minnesota Technical Community College and Ben will be attending Brigham Young University in Utah.

The Rigby High School Senior of the Year award was presented by Clark and given high school graduate to Brigham Nelson. Nelson will be serving a Church of Jesus Christ of Latter-day Saint mission before he returns to start a farming and ranching business where he offers high quality beef to his customers.

“What is old school?” said Comstock. “Does it mean having your students do good on tests? How to become a good student? If that’s old school, students are receiving a great education.”

“She jumped in a miraculous way,” said Howard. “She’s always aware of what people need.”

Bradley began working for the city in September of 2012; he was appointed to Public Works Director five years later in 2017.

“There is not a time when he is not working on behalf of the city,” said Burke. “He puts the interest of the city, residents and employees ahead of his own.”

“Lisa is always willing to help anyone and everyone,” said Brandy. “She is the spark and the force.”

Corey was one of the first ever cadets in the Explorer Program in early 2018.

“We watched Sam grow as a young man and we can smile and say, ‘He is one of ours!’” said Anderson.