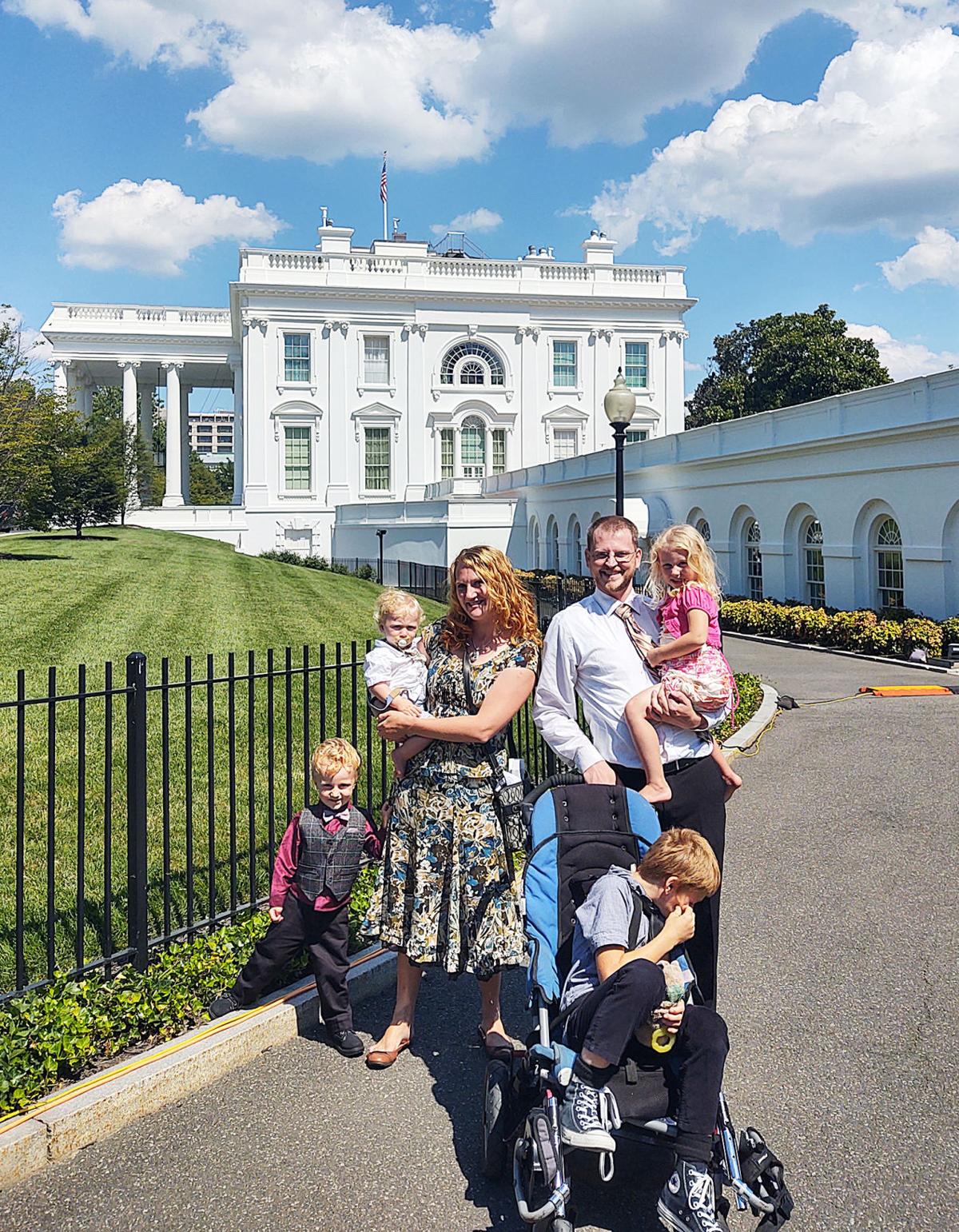 The Bohon family traveled to the White House to attend a roundtable event with President Donald Trump. Spencer Bohon, a non-verbal child with autism, went missing in the woods of Roanoke, Va. and was found by K-9 Officer Remy. 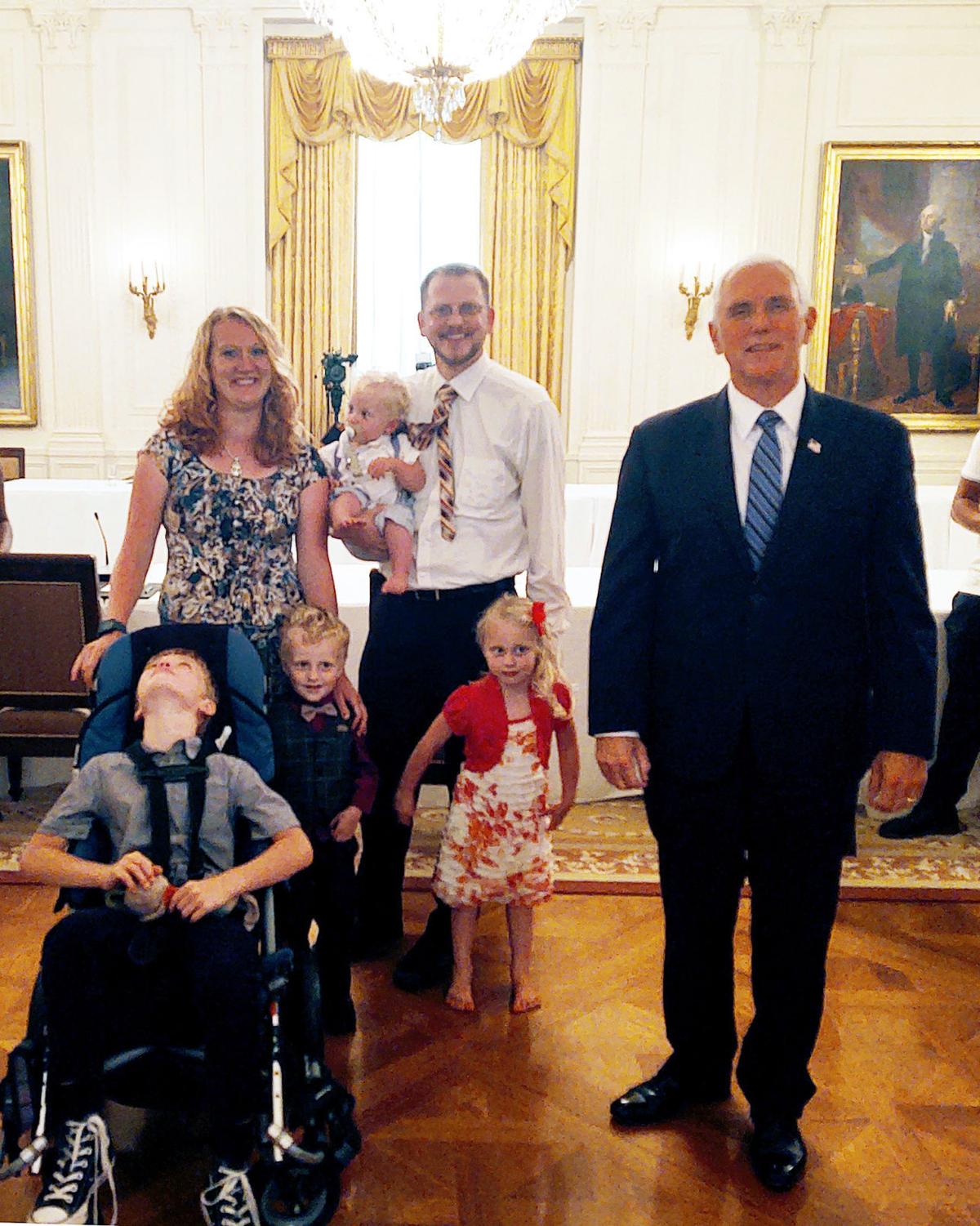 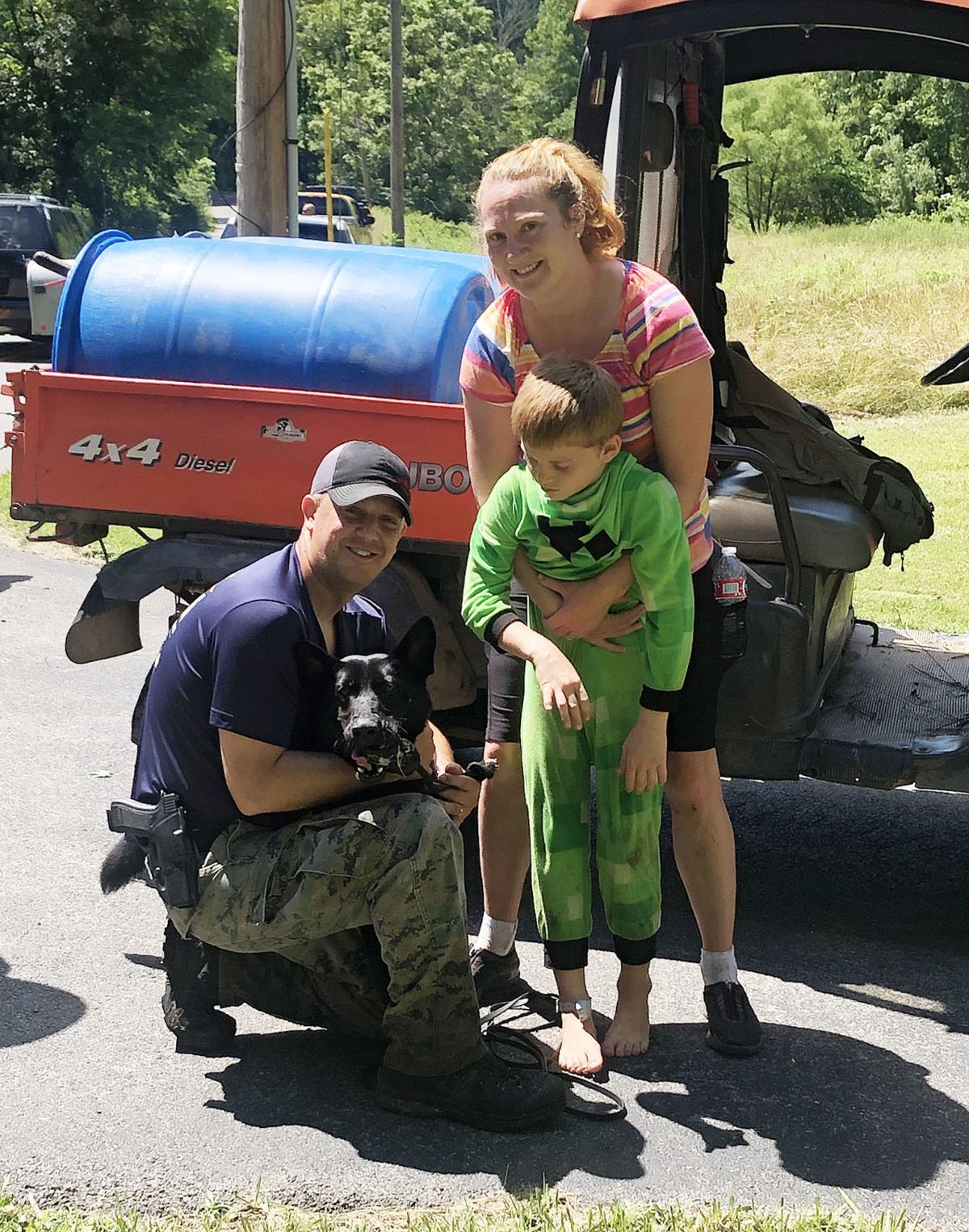 Officer Stephan Foutz and Officer Remi with Sara and Spencer Bohon following the search for Spencer. Spencer, a nonverbal child with autism, went missing from his home in Roanoke, Va. after he climbed out his bedroom window, barefoot and in pajamas.

The Bohon family traveled to the White House to attend a roundtable event with President Donald Trump. Spencer Bohon, a non-verbal child with autism, went missing in the woods of Roanoke, Va. and was found by K-9 Officer Remy.

Officer Stephan Foutz and Officer Remi with Sara and Spencer Bohon following the search for Spencer. Spencer, a nonverbal child with autism, went missing from his home in Roanoke, Va. after he climbed out his bedroom window, barefoot and in pajamas.

The morning of June 24, Sara Bohon, formerly of Rigby and daughter of Larry and Marianne Fackrell, sat in bed with three of her four children, watching a show to start their day.

Sara, a graduate of Bonneville High School, and her husband Joshua met at Brigham Young University – Idaho while both studying construction management and architecture. The couple married in 2007 and ultimately moved from the area to the east coast as Spencer, their oldest son, began to experience seizures at the age of one.

“The healthcare opportunities on the east coast were much better,” Sara said.

Chelsey Manship, Sara’s sister, was staying with the Bohons in Roanoke, Va. when she got a call from her brother-in-law, Joshua.

“He told her to see if all the kids were in the house,” Sara said. “She was checking the rooms and saw that Spencer wasn’t there, and the window was open. He had gotten out and climbed over the fence.”

Sara stated that Spencer is non-verbal and has autism, giving him the will for adventure and no sense of danger.

Sara’s father-in-law had been called by a passerby that saw Spencer in the road and started calling people they knew in the area to figure out who was missing a child. When they tried to get him into their car, Spencer ran into the woods and up the mountain.

“The forest out here is not like back in Idaho,” Sara said. “They’re full of trees and extremely dense.”

As Sara began to look in Spencer’s usual spots for playing, her father-in-law pulled up to the house asking if Spencer was there. When Sara and Chelsey said he wasn’t, Sara says her father-in-law sped off to search for him. Sara loaded up her other three children, ages four, three and ten months, into the car to continue looking. Spencer had already been gone for about 30 minutes.

“I was just panicky,” Sara recounted. “You hear stories all the time about non-verbal, autistic children going missing and they’re found in a river or get hit by a car. They don’t really understand consequences. They just want to have fun.”

Although Spencer does have a tracking device around his ankle through the police department, the battery had gone out and the COVID-19 situation backed up the replacement schedule.

As the search continued, the kids grew hungry and Sara headed home. A neighbor, whose husband was assisting the search, offered to watch the Bohon kids so Sara could head back out.

As Joshua returned home to retrieve Spencer’s pillow and some clothes for a search dog to sniff, Sara and Joshua returned to the road where Spencer was last seen running into the woods.

“We had no idea where to even look because of how thick the woods are,” Sara said.

Officer Stephan Foutz is the handler for K-9 Officer Remi. When he was assigned to be her handler in April, Remi, a three-year-old German Shepherd, was trained as an explosives detector. They began working on training her as a tracker, which Foutz says she caught onto quickly.

“She’s a non-violent dog so she’s good for tracking missing children or elderly adults,” Foutz explained. “The morning of, we were actually training for tracking when the call came in... and the lead K-9 trainer thought we were ready for the challenge.”

According to Foutz, they arrived to the location of Spencer’s last known whereabouts an hour after the call came in. Once on scene, Officer Remi sniffed Spencer’s pillow and began the search.

“She would sniff and then go a little further in and out of the trees and I could just picture Spencer taking that route because he likes to explore,” Sara stated. “We saw marks where he had slid down a hill to a creek. And then the dog’s ears perked up and there he was.”

Foutz said they tracked through over a third of a mile in a variety of heavily wooded terrain. It took Remi approximately 12 minutes to locate Spencer.

He was sitting in what looked to be a pile of wood and when he saw the police, stood as if he were going to run again. That’s when Sara called out his name, and Spencer sat again.

“Before I could say anything, Sara had followed us and called out his name,” Foutz said. “Remi located him and he was about 15 yards away from us in thick brush, barefooted and in pajamas. I’ve been in law enforcement for eight years and this is without a doubt my favorite moment – being apart of finding Spencer and the joy I felt for my K-9 partner.”

Sara stated they took turns carrying Spencer back down the mountain.

“The police were excited because it was Remi’s first search and she had found him,” Sara said.

Foutz said that Officer Remi feeds off his energy as her handler and that she knew she had done something cool. That night, Officer Remi received a special chicken dinner.

As word of Spencer’s recovery spread, Sara got a call from the Roanoke County Police Department. Someone from the White House called the police asking for Sara’s contact information.

Curious and surprised, Sara said they could go ahead and give them her phone number. The next day, a White House representative called, as they were working to gather uplifting stories involving police officers.

“I told them ‘no’ when they first asked,” Sara said with a laugh. “To wrangle four kids to the White House would’ve been tough.”

After telling some friends about the invitation, Sara said they encouraged her to make it work, as it could be a once-in-a-lifetime opportunity. Sara ended up calling back and sharing some concerns she had about making the trip with the White House representative.

“They told me they had interns that could help with the kids, they’d reimburse the gas and that we would all be tested for COVID,” Sara said. “Pretty much all my concerns were put to ease.”

The Bohons got ready and drove the four hours to Washington, D.C. As they sat waiting for their COVID-19 test results, which were ready in an hour and a half, Sara said the kids were able to run around and play before being taken to a conference room in the White House.

“The kids really enjoyed the trip even though it was four hours there, three at the White House and then a four hour drive back,” Sara said. “And getting to see the White House, that’s been a lifelong dream.”

President Donald Trump asked Sara to share about her experience, and with Spencer by her side, she retold the story of how K-9 officer Remi found her son in 12 minutes after he’d been missing for over two hours.

“The fact they got to go to the White House is incredible and I’m so happy for them,” Foutz said. “Sara is really the hero here. The love, patience and kindness she has for her son with special needs is just awesome. Sara is the hero.”

Officer Foutz stated that his goal is that he and Remi can be a part of more of these rescues in the future, as the K-9 officers allow them an option departments otherwise wouldn’t have, as dogs help ground searches be fast and efficient.

Foutz also said that he thinks he speaks for a vast number of officers when he says this is the reason he went into law enforcement – to help people and make the country a safer place.

“I think so much of it was that all the right people were in the right place at the right time,” Sara said.

For now, Foutz and Remi will continue to train in tracking, and the Bohon family will continue looking for options on unclimbable fences.